Watch tonight's game on KENS 5, the official station of the San Antonio Spurs! 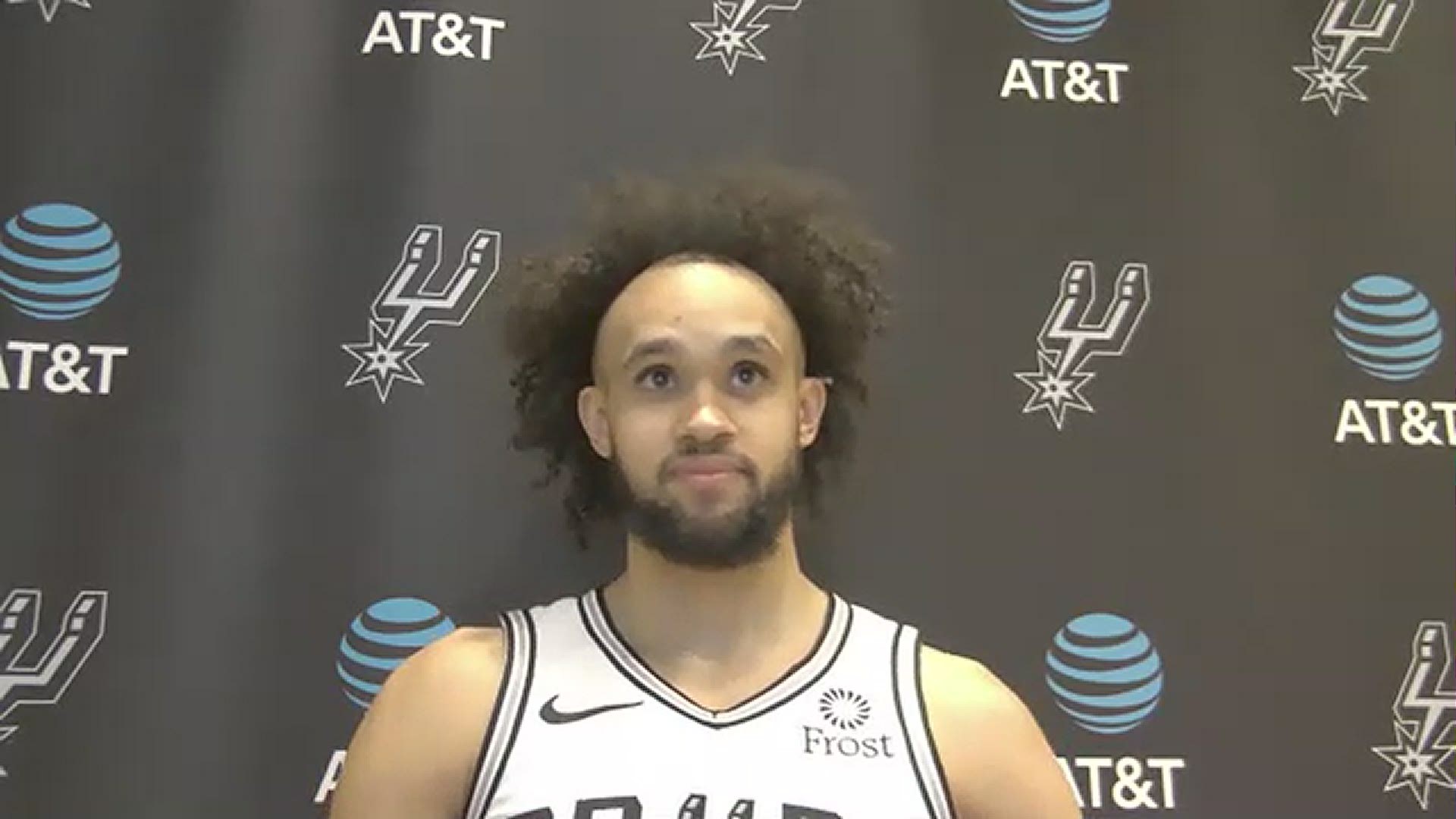 The Spurs fell into a 14-point hole in the first half against the Warriors, but strong team defense and huge individual games from Dejounte Murray and DeMar DeRozan delivered San Antonio a 105-100 win.

On a night when the Spurs shot under 41% from the floor they won because they won the turnover battle, and Dejounte led the charge with a career-high 8 steals to go with 27 points and 10 rebounds. 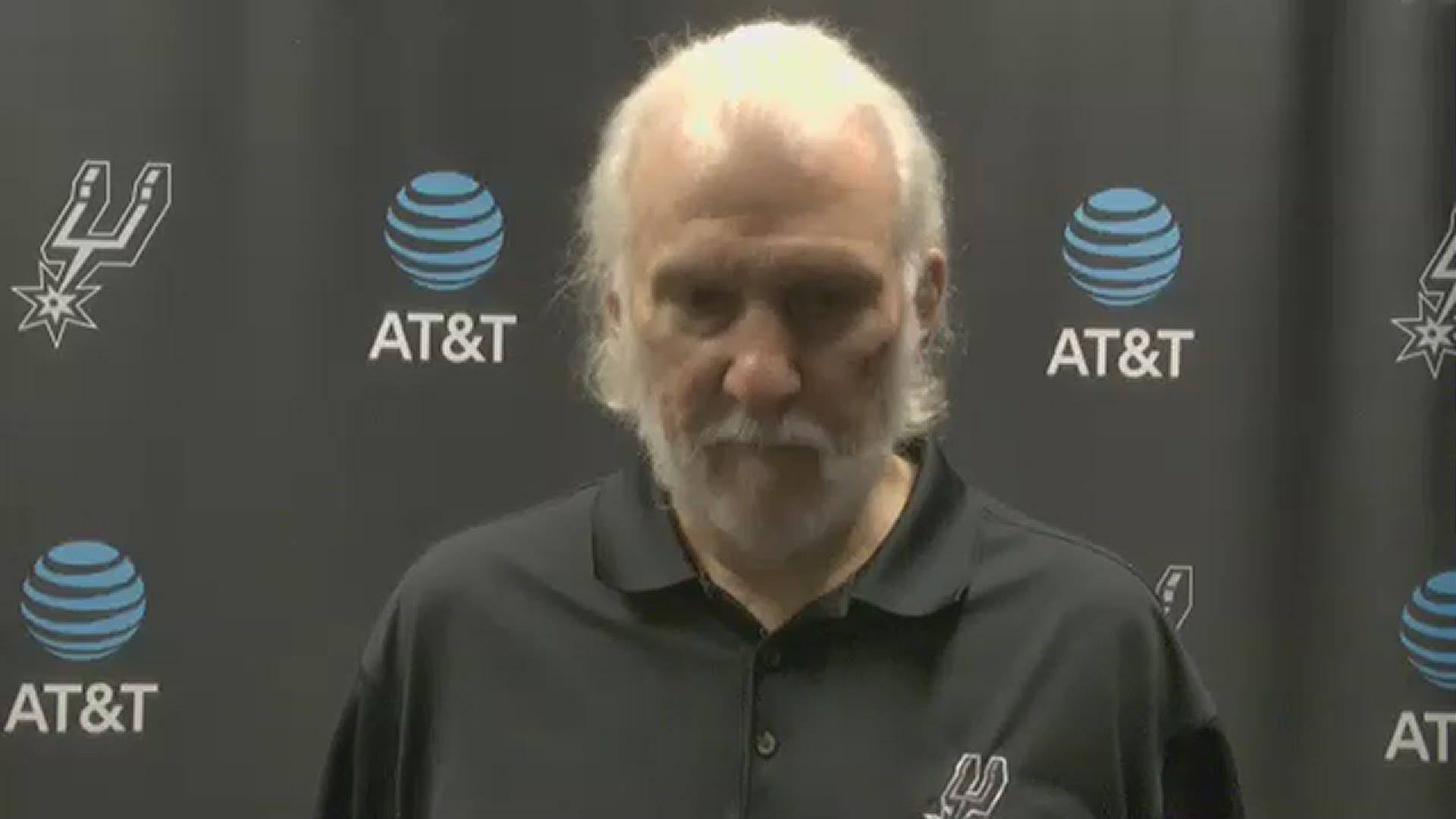 "He's a guy that he has the ability to do that on an even more consistent basis, and he wants to be pushed, and we're pushing him," Coach Popovich said about his point guard. "You're gonna have nights when it's not gonna fall, and defense will keep you in a ballgame, and I believe that they're beginning to believe that."

Murray shot 10-19 from the floor, none bigger than the shot he took with the Spurs up one and 13 seconds to play. He caught a feed from Derrick White and dribbled in before being cut off by the taller Andrew Wiggins. He spun back nearly slipping, steadied himself, crossed over twice with under two seconds left on the shot clock, and stepped back into the corner to drill a three.

DJ said that it's about being ready to shoot, and his readiness in that area has come from work with the coaches.

"I love Chip Engelland to death, we do stuff like that, little do people know. A lot of people might say, 'aw, that was luck, whatever,' but we do game winners," Murray said of his work with the renowned Spurs shooting coach. "Young guys, the end of our vitamins we do game winners like that to the corner or wherever we're at." 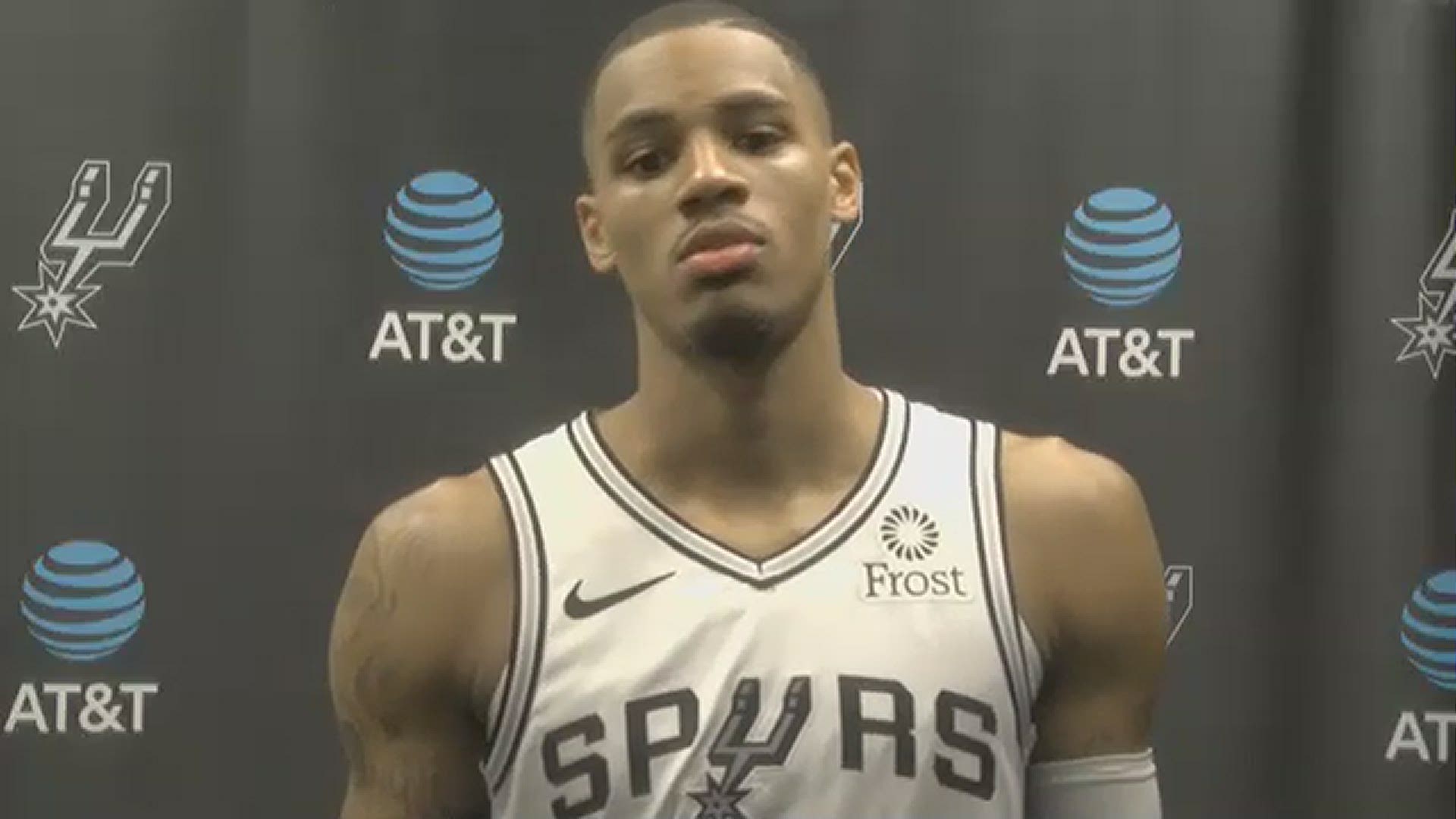 With Murray keying the defense, DeRozan kept the offense humming with 21 points and 10 assists. He was whipping passes across the court, and he said those tougher passes come from watching a lot of games and reading the defense.

San Antonio will get a rematch against these Warriors Tuesday. Derrick White won't play on the second night of a back to back, and he struggled in Monday's win hitting just 1-11 from the floor. Popovich expects to have Lonnie Walker IV back.

Rudy Gay opened the fourth coming off a screen and drilling a three-pointer to give the Spurs the lead. Golden State got it back, but Devin Vassell took one dribble and knocked down a baseline jumper. Then Gay finished a dunk through traffic on a feed from Mills, and Patty made a deep three.

He hit another one, and Gay got to the rim again, pushing it to a 15-6 run to open the fourth and a game-high 10-point lead.

San Antonio's defense swarmed and rotated well as the Warriors hunted for a three they couldn't hit.

The Spurs hit a bit of a wall on offense, struggling to create good looks.

Dejounte Murray got his eighth steal of the game, then drilled a huge three. Patty drew an offensive foul, then almost drew a charge on Steph Curry on the next possession, but it was overturned.

Gay missed a three, but the defender got in his landing space and he went to the line, hitting two of three to make it 98-93. Steph drew a foul against Gay on the perimeter, hitting both.

DeRozan took to the rim and missed, wanting a whistle but not hearing it. On the other end, Patty had to foul Draymond to prevent the dunk, and Dray missed the first.

Derrick White came back in for his defense, and got the board when he missed the second. Murray got a decent look from the corner, but missed. Steph drove in for a difficult layup, cutting it to 1.

Pop called time with the ball and 23.5 seconds left and only 10 on the shot clock. Dejounte Murray worked hard for a stepback three, and this time he didn't miss.

Of course, Steph Curry came down the other end and drilled a triple to make it 101-100 with 9 seconds left. Draymond fouled DeMar, who hit both clutch free throws to secure a three-point lead. After a Green miss, DeMar hit two more free throws to finish with 21.

After a back-cut layup for Golden State, DeMar DeRozan hit an elbow jumper. He pumped in the same spot , but hit a cutting Jakob Poeltl for a layup.

Derrick White got in close and finally made his first shot of the game. Dejounte Murray snagged his sixth steal of the game, and DeRozan hit a triple.

Dejounte finished a tough layup, then jumped in for his seventh steal to tie a career high, drawing a clear path foul and getting to 20 points. He got to the line again after taking a hit low from Draymond Green.

The Spurs built their biggest lead at 70-66, but Oubre took Jak to the rim and crammed it.

Keldon Johnson drove and missed short, but went way up for the board and put it back in. Wiggins finished through Poeltl, but DeMar answered with a mid-range jumper. After a few stops, he turned and faded for another to briefly push it to a six-point lead. The Warriors got a few quick buckets Steph went a bit cold from deep.

Devin Vassell scored in close, but Oubre made two dunks in a row to give the Warriors an 80-78 lead with a quarter to play.

After a slow stretch for both teams to start, Dejounte Murray found Patty Mills for a much-needed three. Drew Eubanks lost a jump ball, the Warriors got a transition layup, and San Antonio got a bit sloppy with the rock.

The Warriors built their largest lead of the game at 45-31 with Steph Curry resting on the bench and the Spurs ice cold, shooting just 1-8 from the floor.

DeRozan came in to calm things down with a jumper. San Antonio forced Golden State's seventh turnover, then Murray finished in tight on a spinning jumper.

16 points and 5 steals for Dejounte in the first half 😳 pic.twitter.com/RdLjjX2JWM

DeMar drove his way back to the line, and Keldon Johnson came back in.

Jakob Poeltl blocked a shot and nearly put one back, but missed. The Spurs forced a turnover in transition, but couldn't convert as Derrick White missed again, starting the contest 0-7.

Out of a timeout, Devin Vassell knocked down a triple in transition off a cross-court feed from DeRozan.

Steph Curry and Draymond Green came back in, but turned it over. After a Spurs miss, Green turned it over again. Dejounte hit another floater, giving him 10 points and punctuating an 11-2 run.

Curry scored, but Murray answered in close. He pulled up for another jumper and hit. Dejounte forced a turnover, but a 3-on-1 break with Vassell went poorly.

Poeltl got another block, DJ got the board, and DeMar found a cutting Poeltl for a layup to make it 51-48.

Green picked up yet another turnover on an illegal screen, and after Patty missed a shot, Jak tipped it in to cut the deficit to one. Oubre made it four with a dunk and 1 through Poeltl.

Murray hit another mid-range pull-up shot, and after a stop Jak finished strong, dunking a gorgeous feed from DeMar to tie it at 54. Draymond dunked it, and Oubre hit hit third triple of the game, forcing a timeout.

The Spurs trailed 59-54 at halftime. They shot under 39% and allowed the Warriors to shoot almost 55%, but San Antonio forced 12 turnovers and had only 3 themselves.

The Warriors started small out of necessity, with Juan Toscano-Anderson jumping center. Draymond Green, came in 7-37 from three on the season, but hit his first wide-open attempt.

Dejounte Murray drove through Green and kicked out to Keldon Johnson, who drained a triple.

Murray poked a steal away and got blocked in transition, but Johnson cleaned it up off the glass.

Jakob Poeltl blocked a shot down low, but Oubre hit a corner three. Poeltl got a bucket on the other end of a feed from Derrick White, but Oubre drilled another triple.

Murray answered with a simple pick and roll, getting to a floater that fell.

Dejounte with the pick and roll floater 💧 pic.twitter.com/KuFsYfvmLl

He forced another turnover on the other end. Poeltl missed a shot, but then forced a miss on defense leading to transition free throws for Murray, who gave the Spurs an 11-10 lead.

DeMar DeRozan tried a three that jiggled out. On the other end, a busted play led to a tough triple for Steph Curry, who hit nothing but the bottom.

San Antonio ran a double screen for DeRozan, who found White for an open three that he missed. Oubre drained another in transition, and White missed another.

Oubre missed his most open three yet, and DeMar got to the basket for a creative layup.

After the Warriors pushed and made a basket, DeRozan got to the line. San Antonio forced a turnover, and rookie Devin Vassell knocked down an open three to tie it at 18.

Oubre dunked it, continuing his smoking-hot start. Keldon Johnson finished on a feed from DeRozan to tie it.

Keldon with the button-mash bully layuppic.twitter.com/t4yhBj7qW9

The Warriors went on a quick 4-0 run out of a timeout, but Rudy Gay answered with a triple. Steph answered with his own over a good contest.

Dejounte hit another mid-range floater, but he got beat to the rim a few times as the Warriors pushed in transition for quick layups. At the end of the quarter, Curry danced, stepped back, and hit one of those special, crazy Steph shots to put Golden State up 36-27 at the buzzer.

San Antonio is shorthanded heading into a rematch with Golden State, but injuries to key Warriors make this a winnable game for the Spurs.

LaMarcus Aldridge is out, but he got exposed defensively the last time these teams played. One of the guys who did the exposing was the young, tremendous, explosive number-two pick James Wiseman, who also missed the game. Jakob Poeltl has proven himself to be a stout rim protector for San Antonio with underrated mobility.

The Warriors are also without Kevon Looney and Marquese Chriss, and Eric Paschall is questionable. The lack of big man depth could be critical for the Dubs, but will also force them to go small and force the Spurs to match.

Coach Gregg Popovich spoke before the game about Derrick White's return from a broken toe, saying he's getting more comfortable but won't play on back to backs, ruling him out for tomorrow. 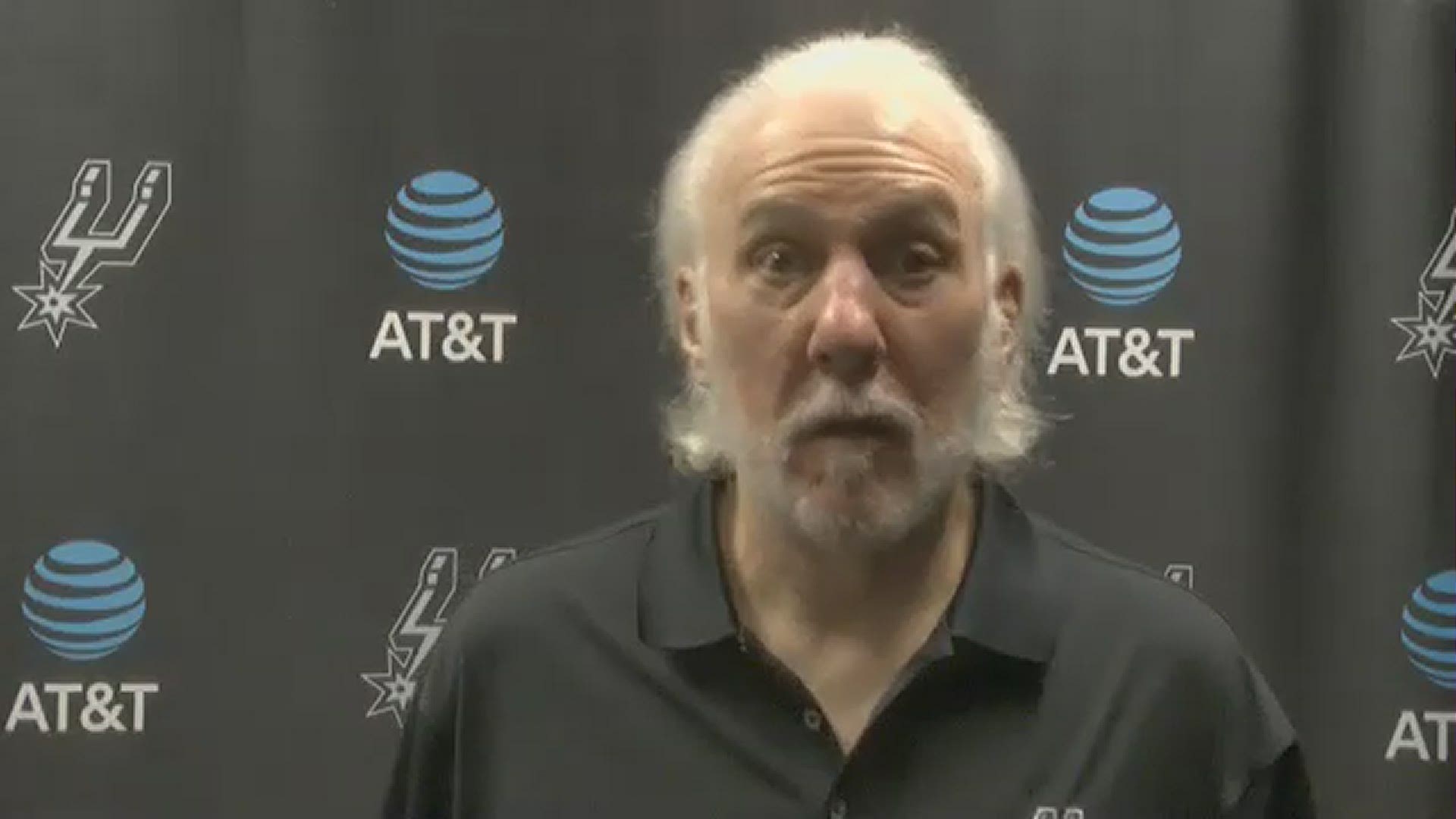 Lonnie Walker IV will miss his second game in a row with a stomach issue, but Pop expects him back for tomorrow.

Devin Vassell spoke before the game about his growth in his first few months in the NBA. He said that he's trying to work hard in practice, ask a lot of questions, and be ready for opportunities like tonight when other guys are out and the team needs guys to step up off the bench. 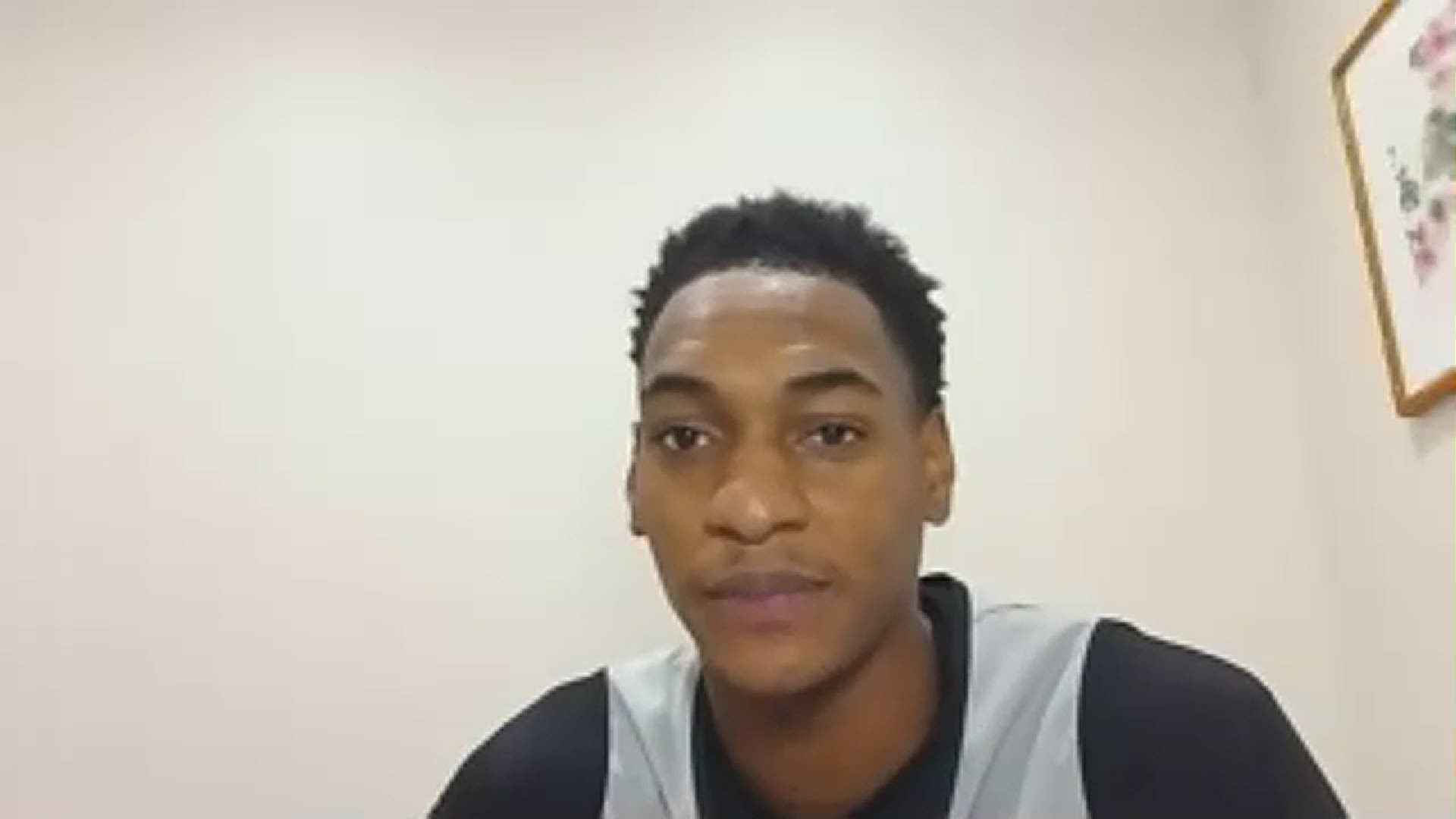 Rudy Gay spoke about that next man up mentality, as well as the growth he's seen from Vassell. 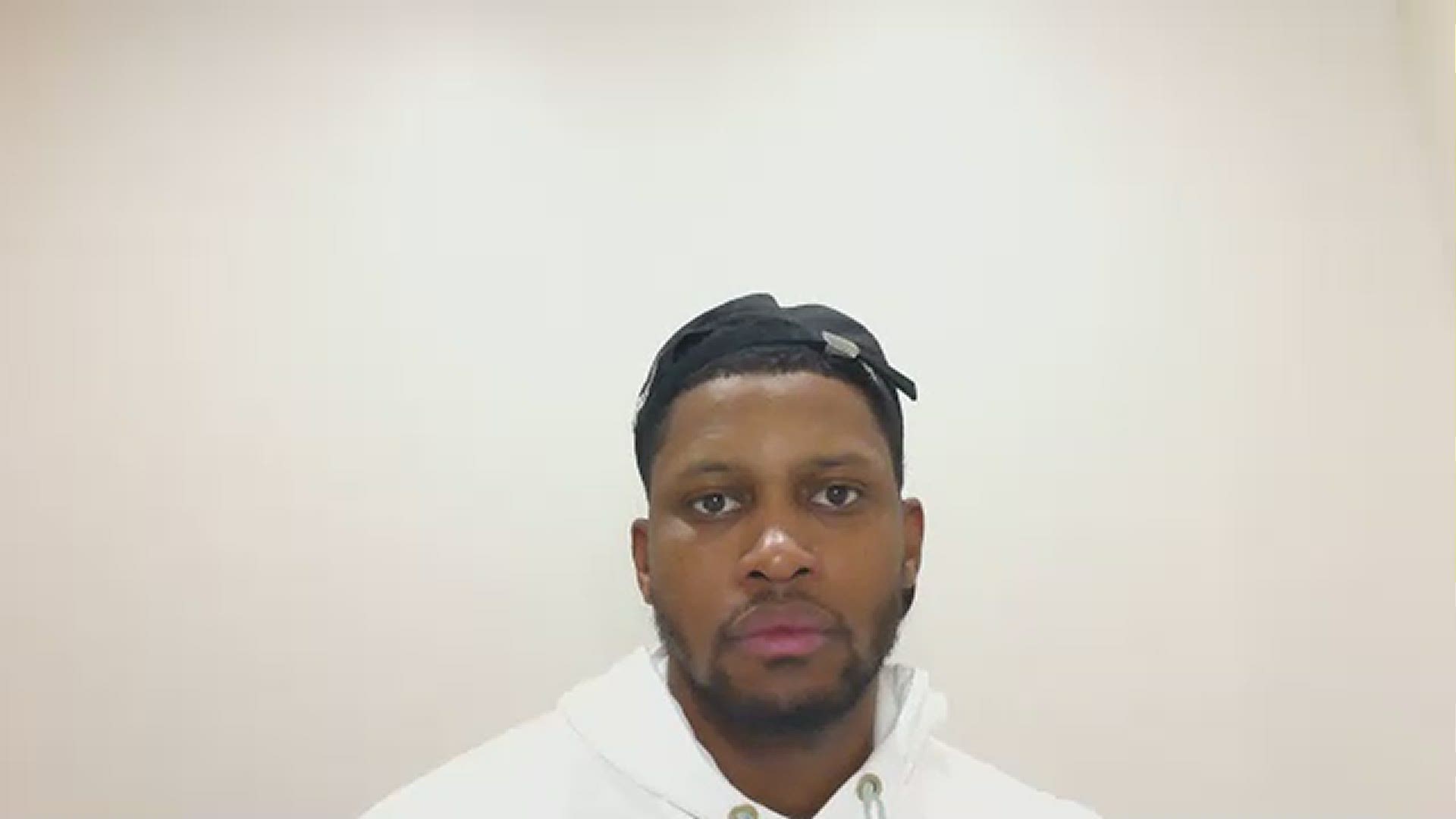 DeRozan, defense power Silver and Black to victory over Rockets

The Spurs got off to a hot start, played tough defense throughout, and got the best of DeMar DeRozan's second 30-point game in a row late as they beat the Rockets 111-106 in Houston on Saturday night.

DeRozan spoke after the game, saying what he usually does after a game like this: he took what the defense gave him. He said that the key to starting the game strong was that they came out understanding the importance of every single game in a packed Western Conference, where the Spurs are now fifth. Eight teams are trailing them by 2.5 games or less.