Spurs Film Session: How San Antonio used the Patty Trap down the stretch against Doncic and the Mavericks

Mills is an undersized defender, but he got a lot of help from his friends guarding the spectacular Luka Doncic late. 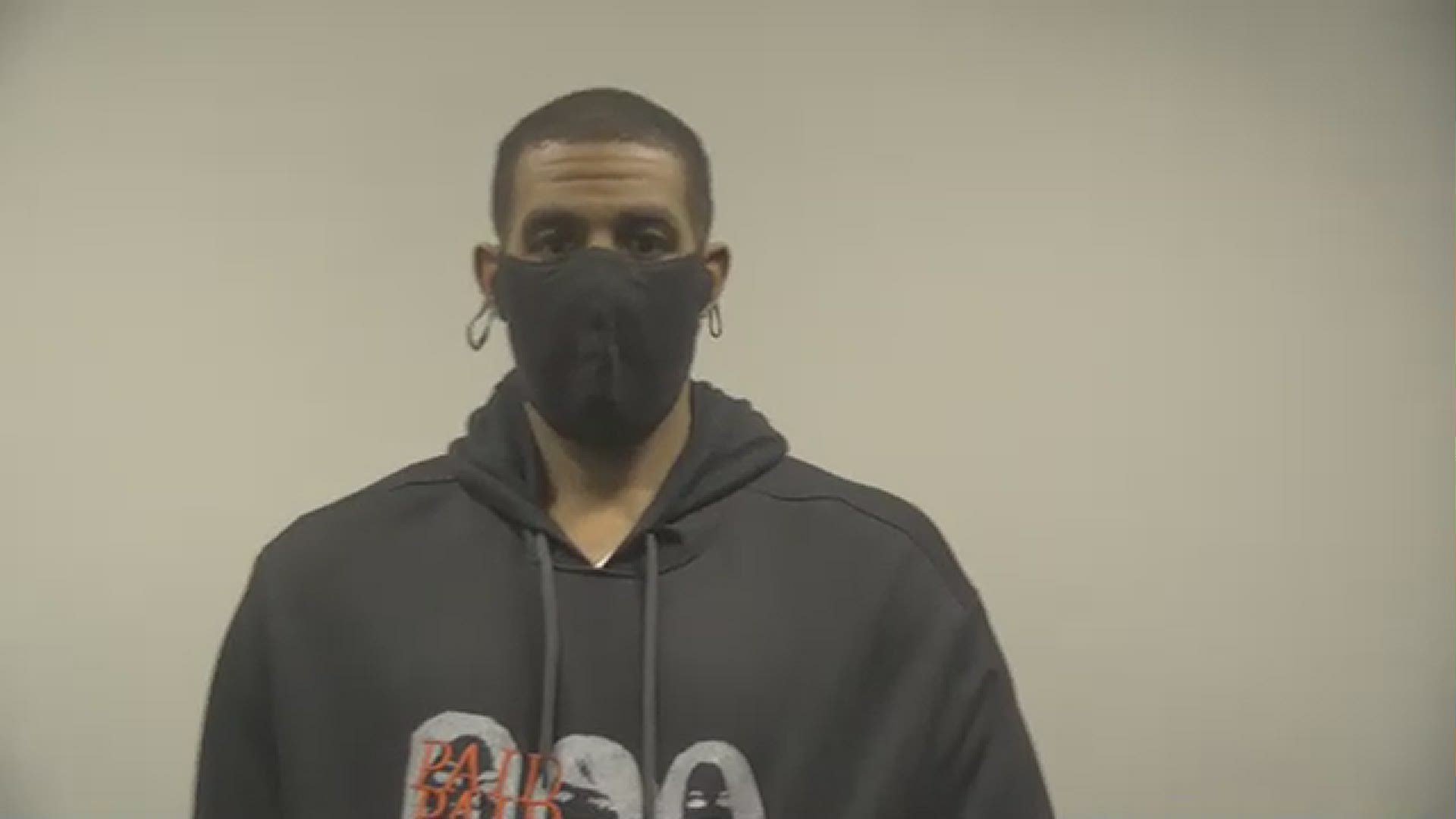 SAN ANTONIO — The Spurs lost Dejounte Murray to an ankle sprain, and struggled to contain Luka Doncic and his teammates after that in a 122-117 loss to Dallas.

However, they put on an impressive fight until the end and used an odd strategy to do it.

Down 11 with 6 minutes to play, the Spurs needed to string together some stops to push for a win. Those who pay attention saw the undersized Patty Mills guarding the red-hot Luka Doncic and scratched their heads, chalking it up to another case of Coach Popovich trusting the veterans over the young guys to the team's detriment. After a few stretches where he guarded Damian Lillard and Steph Curry in the previous games, I said that probably shouldn't happen again.

But those who REALLY pay attention will know that the Patty Trap, as it will be henceforth known, is a desperation defense that has been deployed before, most notably against Kawhi and the Raptors in his first game in another uniform.

Down the stretch against the Mavericks it achieved the desired effect for the most part. In the words of one of my early childhood idols Pistachio Disguisey, "It's crazy... so crazy it just might work."

I asked Popovich after the game what he saw from the team defense, especially with Mills checking Doncic. Pop said they ran the defense that they always run, and he wasn't sure what I was getting at. That's true when it comes to scheme, but the personnel decision was a deliberate one with pros and cons to consider. 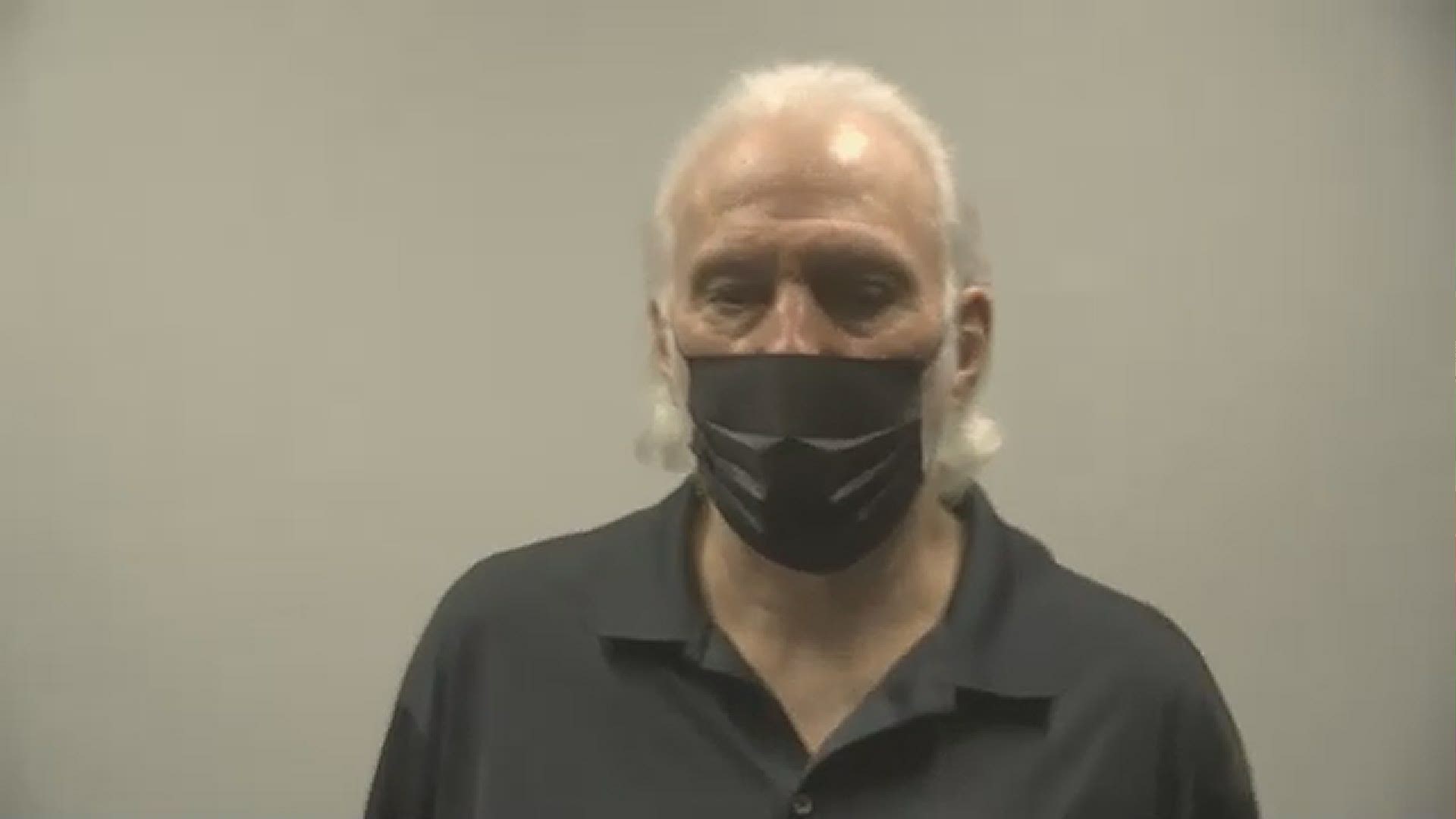 Before we get into how it worked, we have to understand why. Mills stands at just 6'0" which puts him at a size disadvantage against basically any NBA player. Doncic has about 7 inches on him, so you know his eyes lit up when he saw the smaller Mills guarding him. Maybe that was the entire point.

Seeing that mismatch puts Doncic's attack mode into overdrive, and gets him thinking about getting to the rim and scoring if he wasn't already. Mills is sometimes a rough defender off ball, especially for a veteran with his basketball IQ, but he's always a pesky fighter against ballhandlers.

While he does his darndest to apply pressure, the entire team defense needs to focus extra hard on limiting layups and forcing an outside shot, ideally from someone other than Doncic. The aggressive help gets the ball out of Luka's hands. His teammates helped him out for most of the game, but went cold down the stretch.

San Antonio ripped off a 14-2 run to make it a one-point game with a minute left. In that span the Mavericks shot just 1-8 from the floor. The Spurs got extra chances and hit 8-10 free throws largely behind DeMar DeRozan, but 3-9 from the floor just wasn't enough to put them over the top.

Allow me to present the Patty Trap

It’s when you counterintuitively stick Mills on the other team’s otherworldly shot creator, then help so hard he can’t get an easy shot

Other guys get open shots, but you live with it pic.twitter.com/pRccriprDg

On the first attempt under six minutes, Patty was checking Doncic by design with Lonnie Walker IV still on the court. Lonnie had done a decent job with the assignment to that point, with a few mistakes here and there.

Aldridge dropped into the paint and Mills went under a screen from Willie Cauley-Stein, who leaned in giving Doncic a wide-open pull-up three. The shot got halfway down before reconsidering and swirling out.

Giving up an open three is almost never good, and Patty certainly would have liked to be a bit more in the play to make a more meaningful contest. However, if the alternative is a layup drill, you can live with the outside shots and hope they miss.

That was the hope on the next possession as well, as Luka attacked in the pick and roll and got a switch on Rudy Gay, who was covering Porzingis. Gay contained the drive well and Aldridge came over to help at the rim, leaving Keldon Johnson covering two shooters on the weak side. He rotated to the kickout pass at the wing, and Aldridge was several seconds late and several steps short on contesting a three from his guy James Johnson in the corner.

Again, a wide open three is not a shot you want to give up with regularity, but the Spurs kept getting Dallas out of their layup line by making them an offer they couldn't refuse. Again, their hope was rewarded with a miss.

Doncic again attacked Gay in pick and roll, and Mills again went under the screen. This time Luka simply attacked through it, going right at both Gay and Mills for the only points Dallas would score in this stretch.

On the next trip down, Doncic went iso on Mills after he fought through a screen well. Luka backed Mills down in the post, and when he made a move to the basket Aldridge and DeRozan both stepped in to double. DeRozan's help was probably more than the situation called for, and Doncic again made an easy read for an open three. Keldon made a decent rotation to contest late, and Burke missed.

The next play attacked Keldon in pick and pop, and he may have made a mistake in staying home on his man. Doncic got past Mills and looked free and clear to the basket. DeRozan crashed hard from the weakside corner and Aldridge made a phenomenal recovery from the opposite elbow, soaring across the paint and pinning it to the glass.

Doncic went at Keldon again, but this time Johnson stuck with him on his drive. Aldridge again helped off the weakside corner, again Doncic found the open man, and again he missed.

The next time, a pick and roll yielded a switch with Mills guarding Porzingis, but as the post entry pass came, Aldridge was already doubling. Johnson effectively cut off passing lanes to two shooters on the weak side, and Doncic got a late iso on Gay at the top of the arc. He crossed over, stepped back, pump faked, and Gay played perfect defense as Doncic chucked a prayer at the buzzer that was not answered. It was the first three in this stretch that was defended well.

As San Antonio was stringing together these stops, their offense clicked. All of the players have talked about how defense gives them momentum that translates to buckets. Aldridge and DeRozan did all they could to score.

DeRozan drove, kicked and found Aldridge, who pumped from three where he had already hit four and drilled a mid-range off one dribble. He finished with 26 and 9 after a disappointing 4 points and 3 rebounds in the loss to the Warriors. Aldridge also put back a missed three, then posted up and banked in a close hook shot.  That came with 3:52 left, and the other Spurs veterans missed their next six shots.

Though DeRozan shot 0-3 while attacking, he scored 6 points at the line and got another trip with San Antonio down 113-111 and about a minute left. He missed the first, and the Spurs never would tie it.

On the next trip down, Doncic attacked Aldridge and Mills in pick and roll once more. This time, Aldridge was guarding a smaller player in Brunson who popped to the arc, forcing Mills to either switch or double. Giving up open threes had been the gameplan, but maybe not down by just one this late. They switched, leaving Aldridge on an island guarding a downhill Doncic.

Luka feasted on this switch in the first half, and he cooked up one last late-night snack to put Dallas over the top. He put moves on Aldridge with a little hesitation at the elbow, getting the 35-year-old center to move his feet. Luka used that to drive toward the rim. When Aldridge recovered nicely to protect the rim, Doncic used the big man's momentum against him again, spinning and turning for an open banker in close that he hit to push it back to three. Aldridge could have gotten a hand up, but Johnson also could have helped more from his position in the strong-side corner.

🪄 LUKA IN THE CLUTCH 🪄 pic.twitter.com/FOa5SKvh8I

I asked Aldridge after the game about his task in the past three games of anchoring the pick-and-roll defense against Damian Lillard, Steph Curry and Luka Doncic, and he flat out said that it was a challenge. Most big men would probably agree.

"Man, it's tough. You try to force them to take a tough shot, force them to have to make some decisions, and hope they turn it over. We were there all night on Luka and he made some tough shots," Aldridge said before breaking down the last play. "That one leg in the fourth on me, I cut him off, he stops, he spins, goes glass, I can't be mad about that shot because I was there, I was in front of him, and he just made a good shot."

San Antonio still had a chance down three, but needed another stop. This time Mills played great individual defense to stay in front of Luka and there was good help at the rim, but DeRozan again played some superfluous help defense, and this time Jalen Brunson bit him from the corner.

So what do we make of San Antonio's outside-the-box defensive strategy? It certainly isn't foolproof, it's almost a junk defense like the box-and-1 that they deployed for spurts against Steph Curry. Sometimes you need to go into that junk drawer just to show a shot-creating star something different to get them out of a rhythm.

It was fun, and creative, and a learning experience for everyone. The concerning part is why they needed to use this strategy in the first place. Doncic mostly made tough shots, but the easy ones came attacking Aldridge in pick and roll. That's an Achilles heel for the Spurs' defense, and teams will look to exploit it.

Before the game, I asked Coach Pop how to set reasonable expectations for guarding the top shot creators in the league.

"The expectations are already set with the standards that we have, so the expectation is do the best job you can, play smart, follow the game plan, compete," Popovich said. "That's the same, it doesn't matter who these guys are guarding." 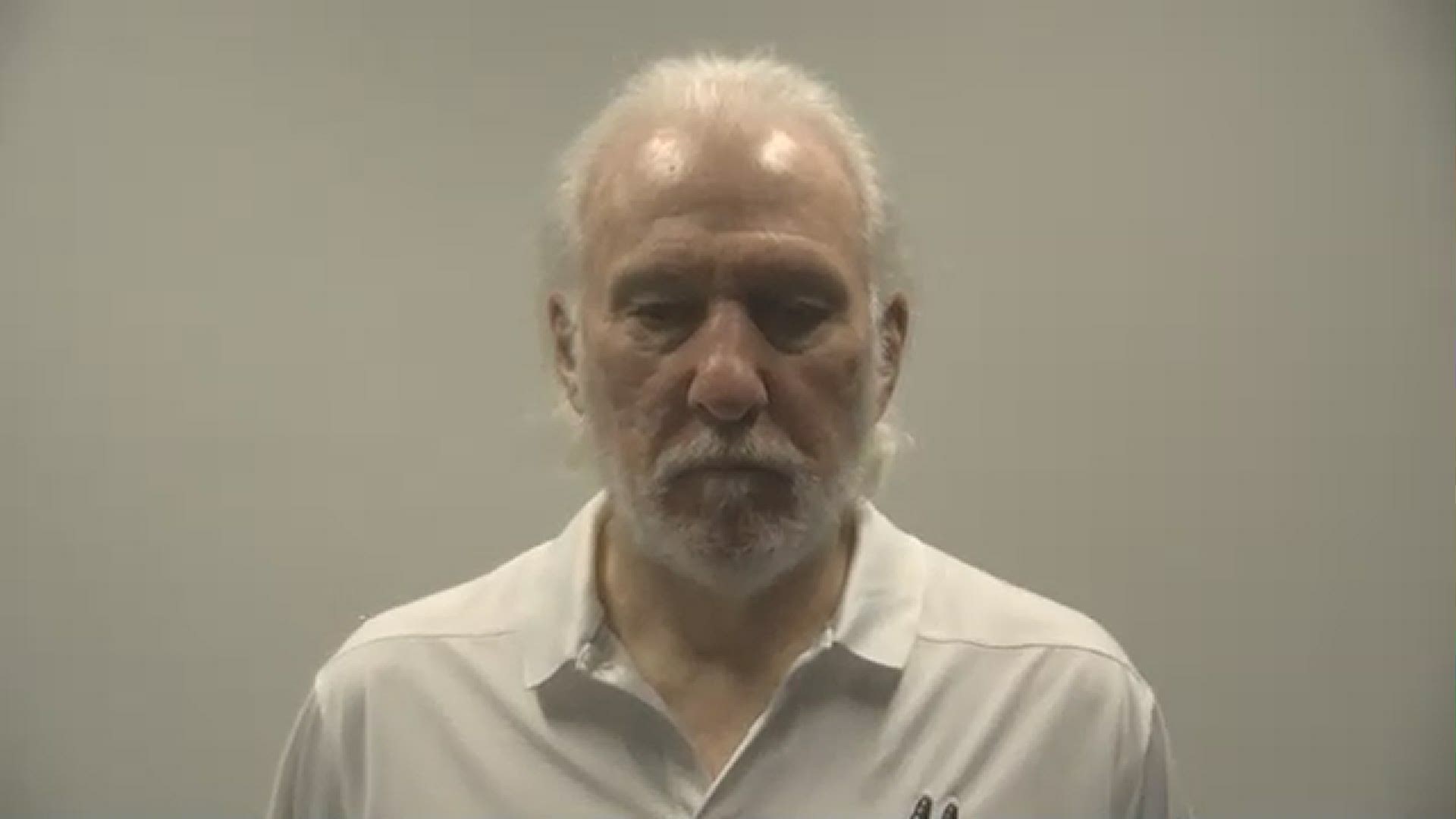 His team did all those things for the most part, just ran into one of the top point guards in the league again, this time without an all-defensive guard in Murray to help.

Mills will always be a bit of a liability, but always a feisty one and sometimes a useful one. Keldon has all the tools to be a great defender, but his attention to detail needs work both off ball and in pick and roll. The same can be said for DeRozan, but at this point it's hard to expect much growth from him on defense.

It's even harder to see it improving for Aldridge, who had become a decent rim protector in his time with the Spurs. He's 35, coming off shoulder surgery, recovering from a knee issue, and was never the most limber guy to begin with. Opponents will continue to exploit his lack of mobility, attacking him in pick and roll and in space in a variety of ways.

How well the players and coaching staff solve this problem will determine how far San Antonio is able to go this season.