A closer look at one play from each of the six Spurs who scored in double figures, plus the defensive stand of the game. 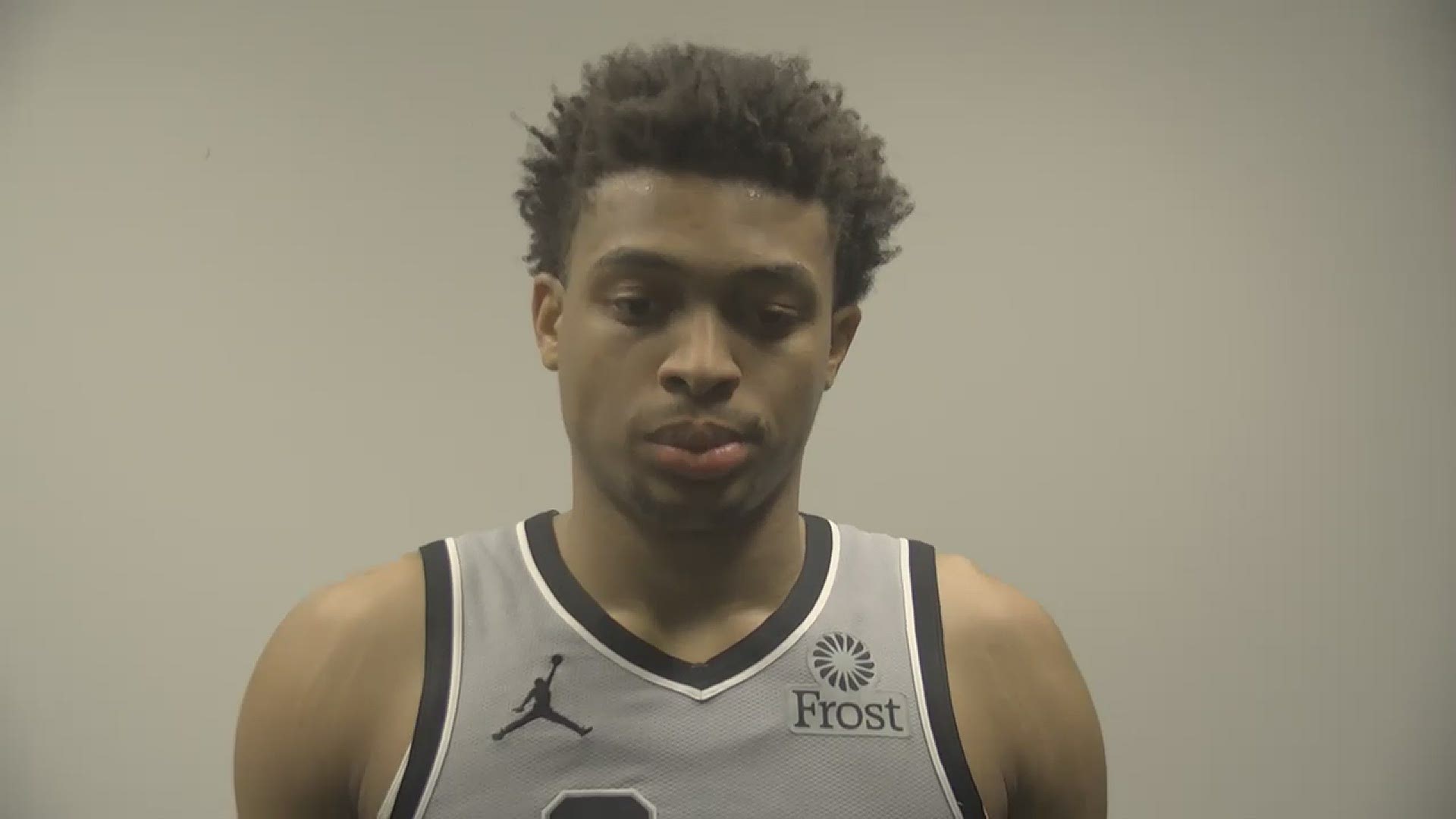 SAN ANTONIO — The Spurs were able to beat Boston 110-106 with six players in double figures.

Finding just one Big Fun Play to break down was hard, so instead we'll do one from each of those players, and a bonus one highlighting the unsung hero down the stretch on defense.

San Antonio wouldn't have won this game without an absurd 29-6 run to end the first half. During that stretch, three Spurs scored more points in a row than the Celtics scored points at all. Keldon went first by attacking the rim, then LaMarcus Aldridge hit a few triples and finished an alley-oop feed from Patty Mills.

Lonnie Walker scored in a variety of ways: drilling a three, driving in for a layup, and pulling up from 19. Those makes pushed a 3-point lead to 10 for San Antonio, but the Spurs weren't done with 6.8 seconds to play.

Mills darted in to disrupt an inbound pass from Tatum, then took it all the way in for a layup. Tatum apparently didn't learn a lesson about the importance of protecting the inbound, because the next one got tapped from Keldon to Lonnie for a buzzer-beating floater.

A spectacular end to the half for the Spurs.

Not so much for Boston.pic.twitter.com/MiL9mcyEhl

LaMarcus Aldridge scored 20 points in this one, none louder than a thunderous dunk he jammed home with one hand over Jaylen Brown. The slow-mo replay showed that he got hit on the head, but it didn't matter.

There was some nuance to how LaMarcus got so open. Keldon Johnson went to the corner, and as Aldridge settled into a quick post-up, Johnson cut to the rim behind Brown, who didn't want to cede a layup and committed to stopping him. With that corner clear, Aldridge could attack with his right hand with no help defender to swipe at him. He beat Theis with a quick turn and drive, and Brown followed Johnson too deep under the basket to help effectively.

Aldridge did a great job here of turning the corner and attacking once Keldon cleared on the backdoor cut pic.twitter.com/P3uzmzsgHj

Keldon Johnson was a terror on both ends, finishing with 18 points and 10 boards. His aggression was lauded by Popovich and DeRozan after the game, but the thing that really stood out in this game was his ability to create his own shot off the dribble, especially against Boston's top tier defenders.

The best example of Keldon's combination of power and finesse came at a pivotal point in the contest. With the Spurs down 101-99 and under 1:30 to play, San Antonio needed a bucket and couldn't find one anywhere with Boston locking in defensively.

DeRozan drove into a crowd and kicked it to Keldon, who did something special against one of the best pairs of wing-defending teammates in the league. He took one dribble toward Jaylen Brown, who met him right at the top of the arc and braced for impact. Keldon is known to drive through anyone between him and the basket, but instead he pulled a lightning-quick crossover to leave Brown in the lurch.

He took one power dribble into the open lane to the hoop and launched skyward off two feet and gripping the ball with two hands, hurtling toward the rim with no regard for the safety of those below. Jayson Tatum was in position and had a notion, but he made a calculation that he was already beat, and didn't want to be both beaten and bruised. He jumped out of the poster dunk, and Keldon tied it at 101.

Keldon crossed Jaylen and took off so aggressively that Jayson just got out of the posterpic.twitter.com/zcU0Qcb1Nh

Celtics coach Brad Stevens needed a timeout to talk things over after that one, and Pop used the break to put Jakob Poeltl back in for defense. He played from  from 3:50 left in the third quarter until 4:03 in the fourth, anchoring a defense that gave up just 22 points in that quarter or so of time. Poeltl had 4 points, 9 rebounds, 4 assists and 2 blocks, but his impact isn't always measured in box score numbers.

Out of the timeout, Jaylen Brown attacked Keldon Johnson with revenge on his mind. He blew by, took off, and cranked down a tomahawk dunk attempt. The only problem for Brown was Poeltl, who was in a similar position as Tatum on the previous play. He made a decision too, but it was a decision to meet Jaylen Brown at Valhalla. His bravery was rewarded with victory in battle.

Pop put Jakob Poeltl in for defense right before this play

Decent coaching, I must say pic.twitter.com/ukNLirlI8I

With the score tied at 103 and 33 seconds left, the Spurs went 2-for-1 with their steady veteran pick and pop duo. DeMar DeRozan finished the game with 21 points and 7 assists, and saved his best work for last.

Jaylen Brown forced DeRozan into an uncomfortable catch, but he calmly attacked off a screen by Aldridge. Brown spun under the screen and switched on Aldridge, leaving Tristan Thompson in space trying to stop DeMar. It was mercifully quick as he pulled up for an elbow jumper and drained it over a good contest.

The pressure was on for Boston, and they went to Cardiac Kemba who had a tasty matchup against Patty Mills. Tatum screened, and though the Spurs had stayed home for most of the game, they switched here leaving Dejounte Murray on Kemba.

Tatum had the mismatch against Mills, but Patty did a decent job denying him the ball. Walker drove just as Murray gambled, and whatever calculations Dejounte made were correct. He poked it away with his absurdly long arm and took it all the way down for a jam to put the game out of reach.

Murray went scoreless in the first half, but finished the game with 11 points and 11 rebounds. He and DeRozan are the two players who seem to always recover at the break if things don't go their way to start.

The Spurs went into battle with one of the best teams in the East and came out winners thanks to teamwork, aggression, and defense when it mattered most.