One of the largest centers for creating vaccine components is right here in Texas and is bringing manufacturing and skilled jobs to the Lone Star State. 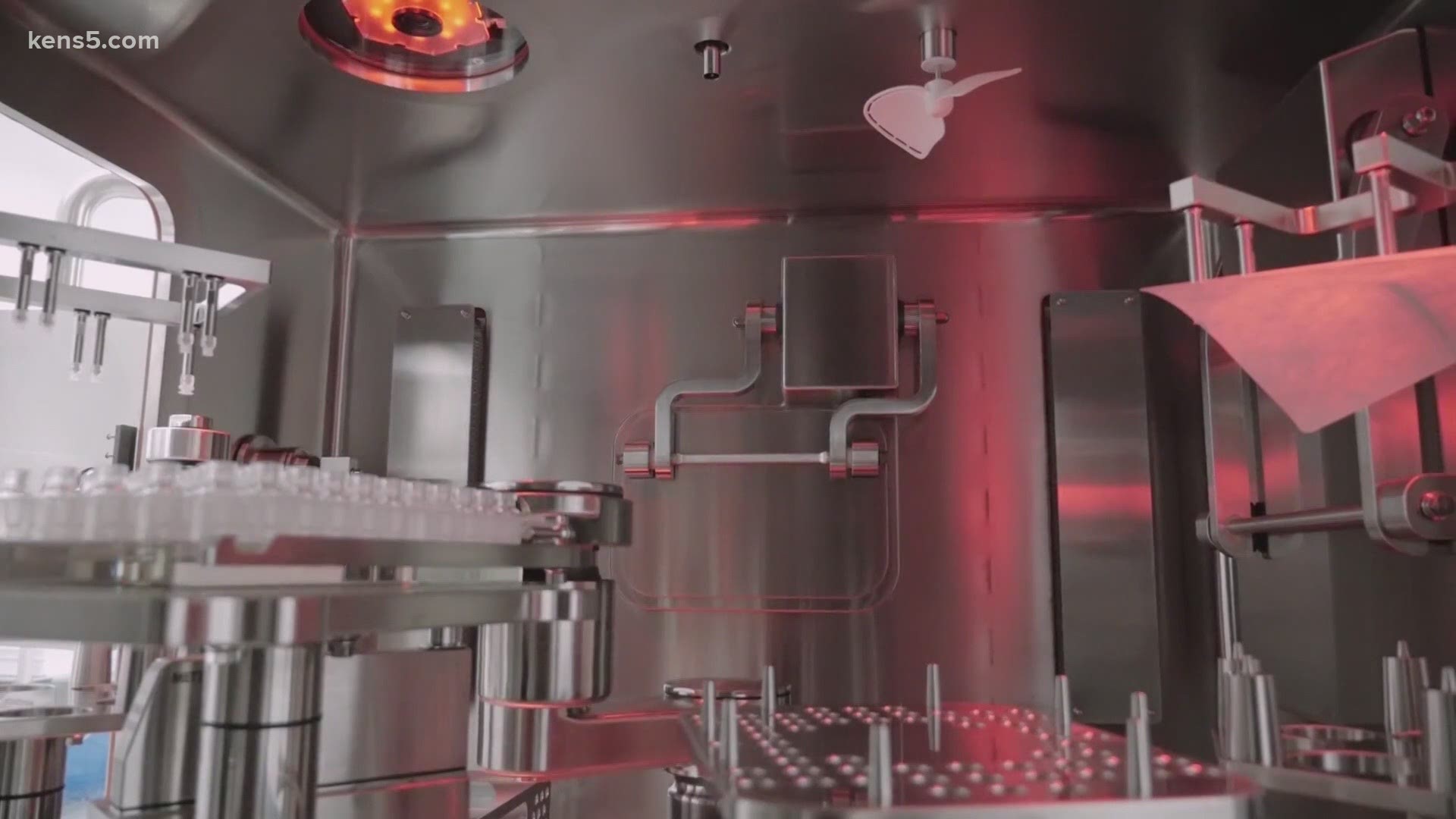 TEXAS, USA — While Texans and people across the country masked up and spaced out to avoid coronavirus, teams across industries raced to find a way to prevent it. A vaccine that would be effective enough to achieve herd immunity could bring hope of, most importantly, saving lives, but also preventing illness, putting people back to work and getting the economy moving again.

In this episode of KENS 5's Commerce Street, we spoke with W. Jay Treat, PhD, the Chief Manufacturing Officer and Principal Investigator for Texas A&M University's Center for Innovation and Advanced Development in Manufacturing about the center's involvement in vaccine manufacturing, and how the center could lead to more jobs in Texas. Then, we speak with Venkatesh "Venky" Shankar, PhD, the Coleman Chair Professor of Marketing and Director of Research at the Center for Retailing Studies at Texas A&M University's Mays Business School.

Listen to the full conversation on Commerce Street below or download it from Apple Podcasts, Spotify or Google Podcasts. 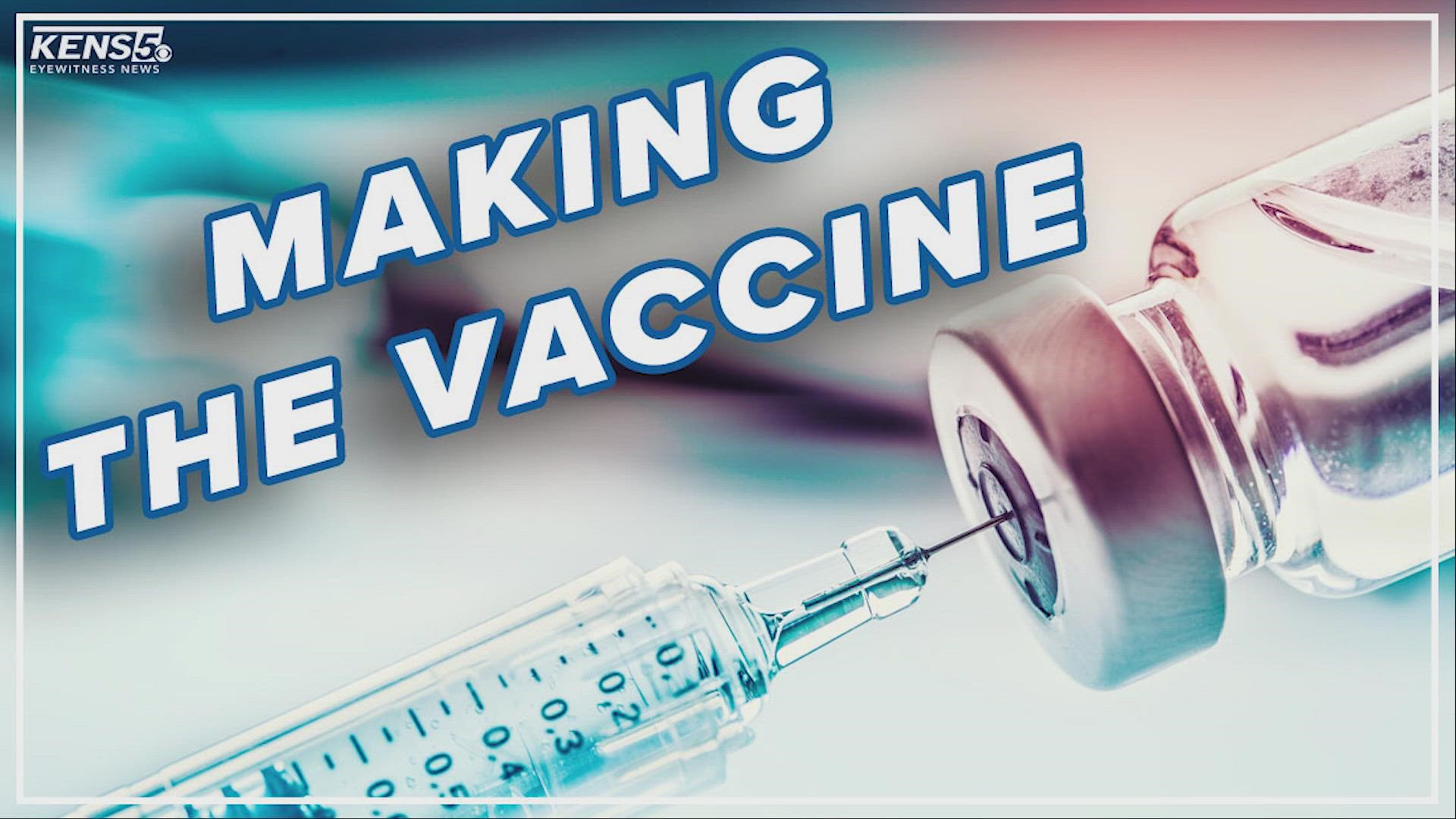 FUJIFILM Diosynth Biotechnologies Texas, a subcontractor of the CIADM, recently completed its facility capacity expansion in College Station for large scale production of the vaccine.

W. Jay Treat, PhD, the center's Chief Manufacturing Officer and Principal Investigator, talked to us about details of the project and how it got started.

What is the Texas A&M University System's Center for Innovation and Advanced Development in Manufacturing (CIADM)?

Essentially, this program was established back in 2012 when we had the 2009 pandemic, the United States government and legislatures recognized that there was insufficient manufacturing capability in the United States. So the CIADM's came up, there were three of them to begin with. Texas A&M, which is a nonprofit obviously, Novavax, which is a company and Emergent BioSolutions, which is another company. And the government put money into infrastructure in United States to be able manufacture a vaccine in the event of a pandemic.

So this facility here was essentially completed and built out in 2017, so it's been a relatively short time that it has been operational. It is one of the potentially largest ones in the United States and it was designed around the flu pandemic. The difference was-, as most people know; flu is made in an egg-based technologies, from eggs and chickens. This was a way to try to create a new technology in what is called cell-culture based manufacturing. And the best way I can explain to the layperson is craft beer and craft hard alcohol. You go into some of these places and you see the giant copper or stainless steel tanks in there. Really, the difference between the craft breweries and microbreweries for vodka and hard alcohol is we do the same thing. We have a big tank, but instead of producing something with alchohol and flavorings, we produce a protein or a virus that can be put in the body for therapeutic applications.

Texas A&M, when we were commissioned to do this, built the facility, and then we partnered with and sold the facility to FUJIFILM Diosynth Biotechnologies. They are a government subcontractor to us now, so when the contracts come through, they come to us. And then we award subcontracts to those people that work in our purview. So that's what happened on this contract for COVID-19, we were awarded a big contract and then we subcontracted with FUJI.

With COVID-19, we needed a vaccine fast. What other factors go into acceleration? Has there been research going on in that vein?

If you even went back 20 years ago, the things we can do today with identifying the target site for the most immune response to the COVID virus, being able to generate the cell lines to produce it, then the genetic construct that goes in to make the antigen to be used are so far superior than they were 20 years ago. And the government gets picked on an awful lot for not doing things right, but I think Operation Warp Speed was something that was incredibly beneficial. And I have told people that we probably use that as a model for how we do biologics in the future. Because we have basically taken a process that might have a year or year and a half to build out a facility, and might have taken three years to go through all the clinical trials and that is basically being compressed into a 12-18 month process.

We have heard all about the various vaccine candidates, including the Pfizer vaccine, the Moderna vaccine, and others awaiting approval. Will the facility at College Station be involved no matter who is approved?

We are equipped to make things that are cell-based here. They are in big giant tanks. The Pfizer and Moderna products are essentially a small molecule that is synthesized. So that is different manufacturing process. It does not require cells to grow in to produce it. This facility was specifically designed to move from egg-based technology to cell-based.

So if another vaccine candidate that uses that technology is approved [besides Novavax], then this facility would be used for that as well?

We actually have one other company that we are gearing up to come into the facilty. And there is a third one that may be an interest depending on how far the government goes along. We all believe there are multiple positives on goals, so to speak, for success.

The Center also operates a workforce development program and students in College Station all get a view of what is going on. What kind of opportunities are there in this field, and for people in San Antonio, what do we need to know about this program?

The workforce development program was also part of the CIADM program, they are subcontractor to us. The idea was that along with understanding there was a shortage of manufacturing capacity, there was also a shortage of trained, skilled workers to do this. This is not something that you just pick up tomorrow and start doing.

So the challenge was: how to get augment the people in college to get some hands-on experience and fil those roles. Getting them trained to be the first line to get into some of these jobs. There’s not a problem finding an engineering firm to build a facility, that’s not a problem. The problem is finding the people...I think there’s a lot of opportunities going forward.

Just to kind of understand the consumer behavior we’ve seen this year; of course there have been some restrictions on businesses but have we also seen, economically, some reluctance because we haven’t had a vaccine?

(Interview taped in December) This is the holiday season so the economic spending habits of consumers have been a little bit subdued than expected, but still better than last year. So the retail sales, for example, have gone up close to 2% during the holiday season so far. As the vaccine gets rolled out and more consumers get access to the vaccines, the economic impact will be more positive as you move on. More importantly, the vaccine is expected to save a lot of lives- and that will be a very important gamechanger.

Have there been any specific industries here in Texas that have been particularly impacted that might see quick turnaround as more people get vaccinated?

A lot of small and medium scaled businesses will be the first big beneficiaries of this. As you know, nationwide, 160,000 small and medium sized businesses had to close down and 60% of them will never be able to reopen given all the economic hardships. So those would be the primary beneficiaries. Of course, industries such as travel, restaurants, bars, small retail shops- anything that was, mass spectator events, including theaters, these would be immediate beneficiaries once we get more vaccinations up and get close to herd immunity.

From a marketing perspective, maybe not for the vaccine specifically but the pandemic in general, what trends have you seen develop?

Dramatic changes because COVID19 has accelerated the move and what we have seen remarkably in the last 9 months was what was predicted to happen in 5 years and more. So more and more businesses, including retail businesses, have shifted very rapidly online, so now we are all ordering from the click of our device, buy online pickup in store, curbside pickup. We also are getting food and other items delivered to home. Businesses have rapidly adjusted to that and its not just in retail. Talking about online education, which has expanded rapidly; telehealth and heathcare from home, we have millions of people working from home. There’s been a lot of shift in marketing, especially digital marketing.

I know you mentioned some of those changes we expected to see maybe 5 years down the road, but instead they’ve accelerated. So while the vaccine may bring more people back into physical spaces- do we expect we’ll still see these work trends, or these marketing or business trends?

Sure, they’re going to be a hybrid work situation even after this pandemic, even after we get vaccinated and protected. Because we have now experienced gains from home, and most of the tech companies are telling their employees to work from home way into the 2nd half of 2021, so we are going to see new normals where people match the comfort and convenience of working from home with the benefits of public spaces, but we should expect digital to take over very massively as we move forward.

Is there anything else you think is important for people to understand?

I think the most important thing that people have to understand as customers and citizens is the need to get vaccinated so for their own benefit, society’s benefit and the economy’s benefits, these are the auxiliary or catalyst events for them to get back to normal. The US has a good plan of distributing vaccines, although we need a lot in supply, but as soon as they’re made available to populations, people will need to take that for the economy to get back to normal.

Listen to other recent episodes of Commerce Street: