Follow here for the latest stats, highlights and analysis. 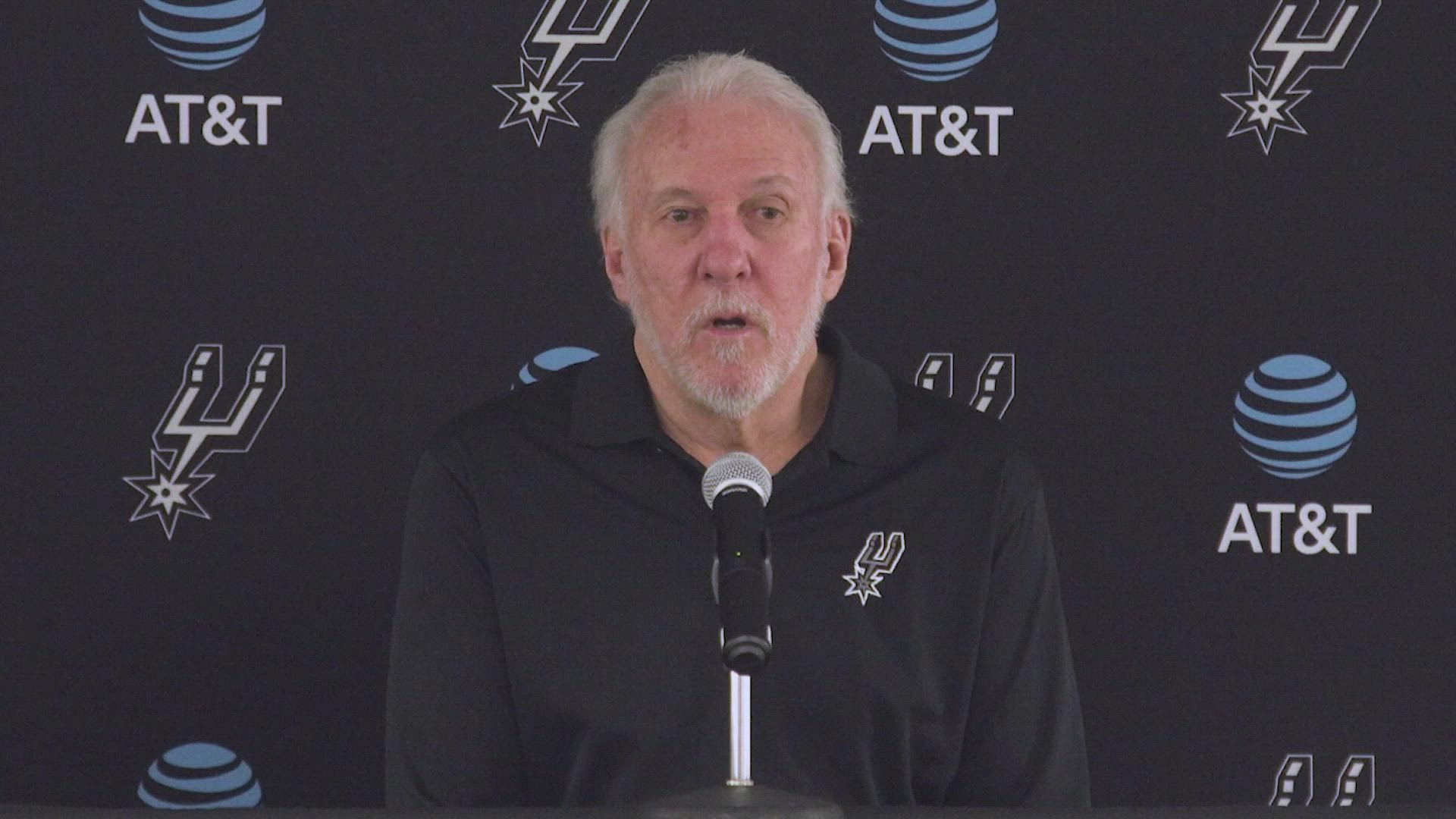 SAN ANTONIO — The San Antonio Spurs are 1-0 on the season after handily defeating the Orlando Magic, 123-97, at the AT&T Center Wednesday night.

Devin Vassell led the Silver and Black with 19 points as the team shot 50% from the floor.

Spurs take care of business against Magic for season-opening win

Dejounte Murray got the first bucket of the season for San Antonio, driving to his right in pick and roll and kissing it off the glass.

The Spurs' two-way leader got beat on a pair of backdoor cuts, and got a talking to from Gregg Popovich about it. In the next few minutes, he picked up a pair of steals to make up for it. Derrick White made a two-way impact as well, blocking a shot and draining a triple on the other end.

Keldon Johnson cut backdoor, crammed a reverse dunk and screamed and strutted as he does. He drew a number of fouls on hard drives as well.

San Antonio trailed, but Doug McDermott drained a triple to take the lead and then another on the next possession to draw a roar from the crowd.

Drew Eubanks put back a miss with a slam and hung on the rim for a second, and San Antonio took a 32-28 lead into the second quarter.

Doug McDermott faked the defense into thinking he was going to take a handoff from Jakob Poeltl. Instead he cut back toward the basket, reversing home a perfect pass from Poeltl.

Poeltl made a tremendous impact on the offensive glass, collecting five of his team's misses in the first half alone.

All of the Spurs' starters had three baskets in the first half, along with Devin Vassell who created some impressive space with dribble moves.

Devin Vassell might be coming for some ankles this year pic.twitter.com/J0zZJR0Hg1

Keldon Johnson drove the lane and drew oohs and aahs from the crowd with a long, smooth eurostep. After floating that shot home, he pulled up off a screen for a mid-range make.

Spurs shot 4-14 from deep in the first half.

Derrick White got the first bucket of the second half, pumping at the arc, hesitating, and laying it in through contact.

Jakob Poeltl found a cutting Keldon Johnson for an easy deuce, and Orlando called time. It was a choppy first few minutes as both teams struggled to score. Murray bounced it to Poeltl in pick and roll, ending with a dunk. Poeltl found McDermott on a cut to the hoop, then he floated one home off a feed from White.

Devin Vassell drained a three, then Lonnie Walker IV did, soaking in the cheers from the crowd.

Vassell forced a steal and crammed it in transition. Then he forced another, and when Poeltl put back a transition miss. Another transition break started with he quarter winding down, and the crowd started screaming before Vassell even got the ball in the corner. The shot fell, of course, and San Antonio took a 94-71 lead into the final period.

Before starting his 26th season as the head coach of the San Antonio Spurs, Gregg Popovich said that he still gets butterflies after all these years.

"Inside your body it's the same, you still get butterflies, still feel that competitive sort of nervousness before a game starts, but most coaches will tell you once the ball goes up, all that goes away and you dive in and compete, win or lose and go home," he said. "It's not a whole lot different for me."

Popovich said that he would start with Dejounte Murray, Derrick White, Keldon Johnson, Doug McDermott, and Jakob Poeltl. McDermott is the new addition to that unit, and Pop likes the way he's fitting in.

"He's been great for our team because he obeys the basketball gods," Pop said. "He cuts with purpose, he makes the extra pass, you can tell he's a coach's son. He just does things the right way. Great teammate, understands things quickly, so he sets a really good example in all those fundamental ways for everybody else. He's been a wonderful addition."

San Antonio ended the preseason 3-2. Dejounte Murray finished the preseason with a team-high 17.0 points per game and 4.2 assists per game. Jakob Poeltl led the team in blocks at 1.5 per game while Bryn Forbes shot 48-percent from the three-point line.

RELATED: 'I'm ready to get it going' | Spurs' Vassell ready for season-opener

Zach Collins will be out against the Magic and rookie Jock Landale will be available after going through the NBA's concussion protocols.

This will be the first of two regular-season matchups between the Spurs and Magic.

RELATED: Heading to see the Spurs on Opening Night? Here's everything you should know.

1. Winning! The Spurs have won three straight against the Magic overall and two straight at home.

2. Points? With players like DeMar DeRozan, Patty Mills, LaMarcus Aldridge, and Rudy Gay no longer on the team, which current Spur will carry the offensive load? In the preseason, the team was led by Murray (17.0 points per game) and Keldon Johnson (15.0 points per game).

B. Forbes on the young team, and their lack of experience #nba #porvida #nbatwitter #gospursgo pic.twitter.com/8W8aovKCSy

3. Forbes hot-shooting! The Spurs needed to address the lack of three-point shooting and brought back the former guard. Forbes lit up the three-point line in five preseason games averaging 48-percent and connecting at close to three a game.

4. Cleaning the glass. The Spurs ranked sixth in the league in rebounding at 26.6 per game during the preseason.

5. Fast breaking fiesta! The Spurs' average pace hit at 102.3 during the preseason.