Stay updated with all the Hurricane Nicholas coverage. 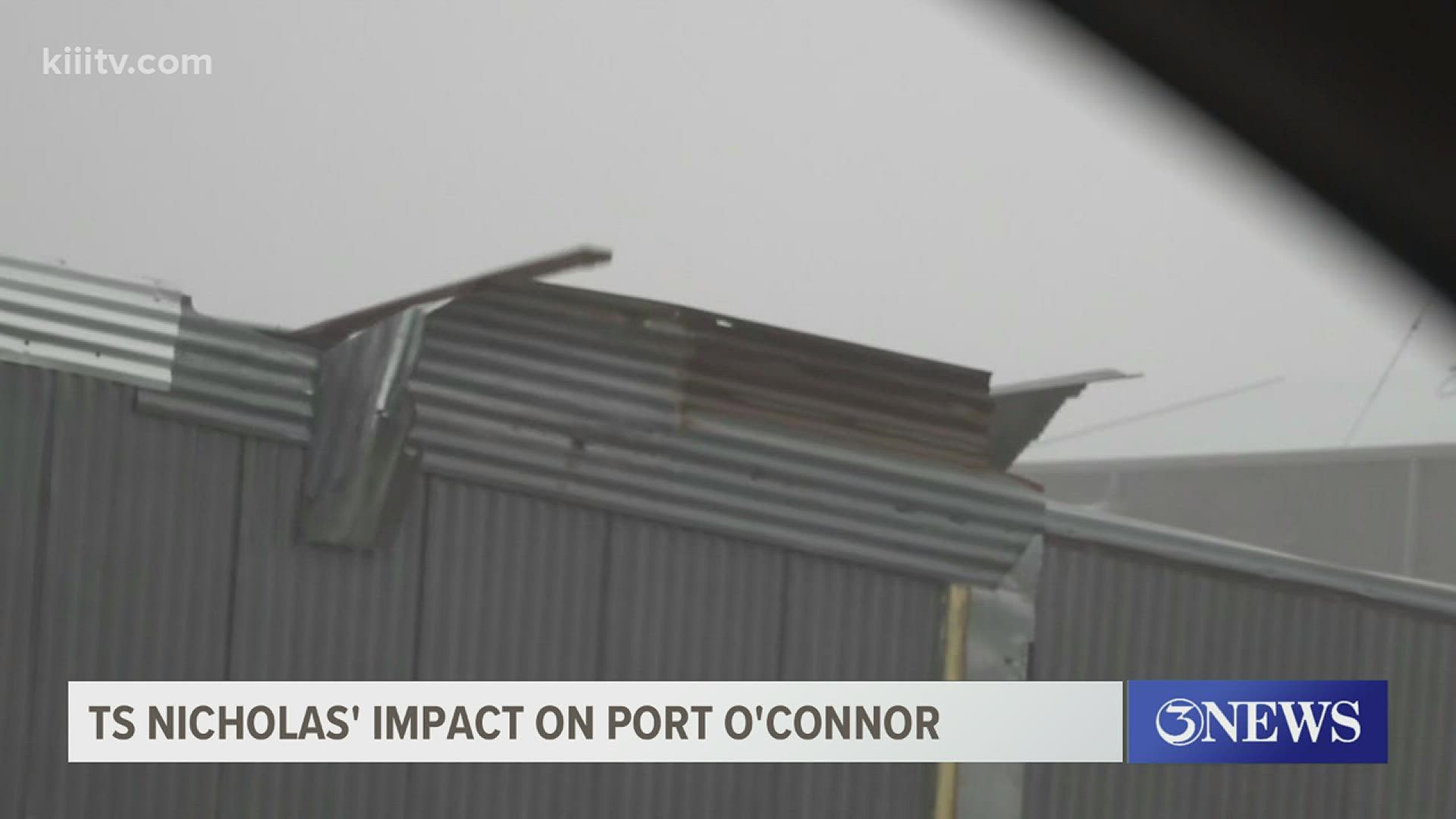 CORPUS CHRISTI, Texas — Stay up-to-date with coverage of Hurricane Nicholas and its impacts on the Coastal Bend here.

A few high-water locations are popping up across Houston due to Tropical Storm Nicholas. Areas along the coast are more impacted, with several impassable roads reported in Galveston early Tuesday.

The biggest closure right now is Highway 225 in both directions at Richey, in the Pasadena area.

RELATED: High-water locations in Houston area due to Tropical Storm Nicholas | 225 is underwater

A Flash Flood Warning is in effect for parts of Brazoria, Galveston, Harris and Matagorda counties until 5:45 a.m.

Hurricane Nicholas makes landfall, according to the National Hurricane Center. Landfall was near Sargent, just north of East Matagorda Bay, according to KHOU.

More than 60,000 power outages reported in the Houston area, according to CenterPoint Energy. Nicholas has yet to make landfall. 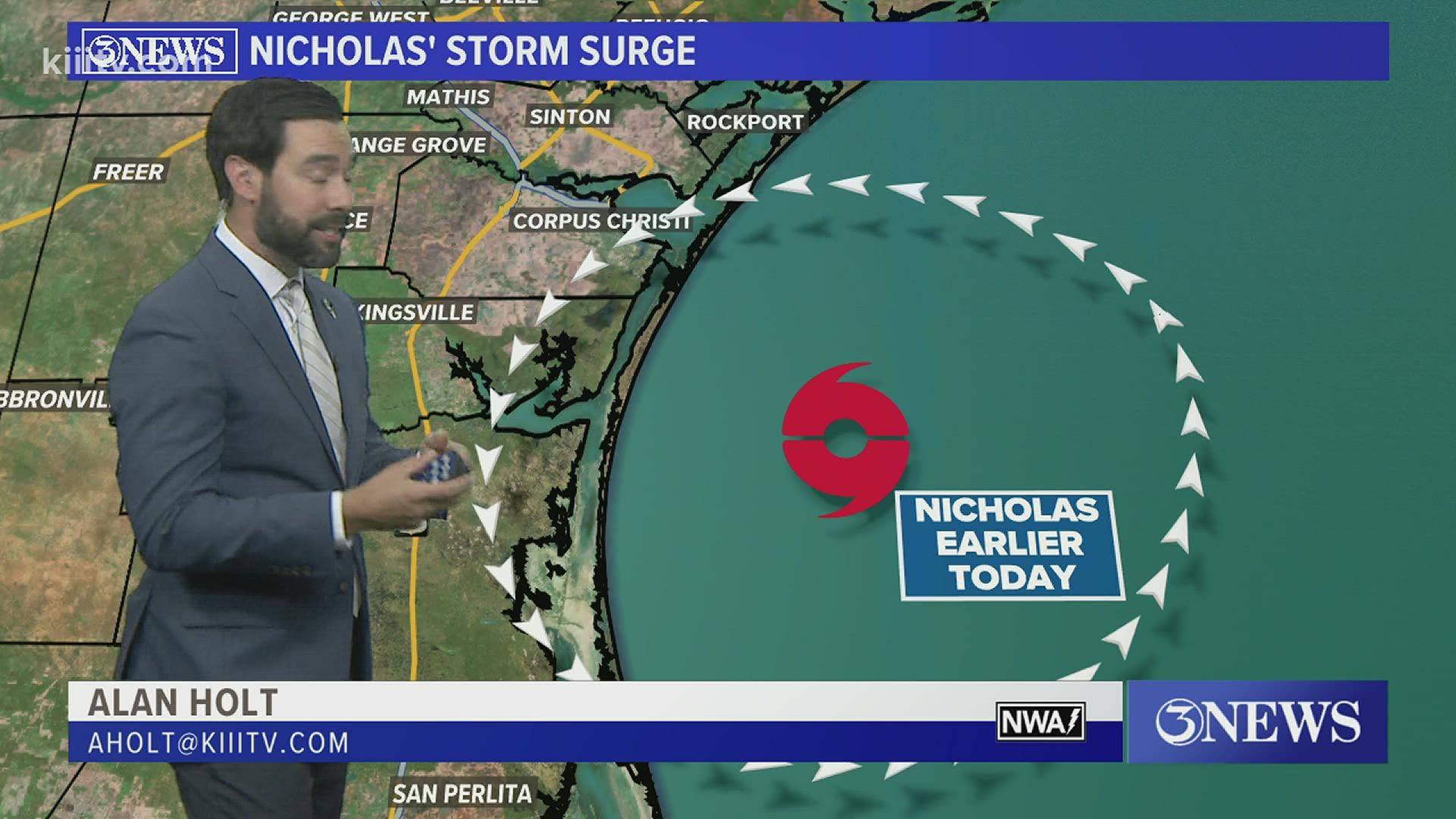 Julissa Garza gives an update on the effects the hurricane has had on the Coastal Bend.

Bill Churchwell gives a late Monday update on Port O'Connor and how residents are navigating the final moments before Hurricane Nicholas makes landfall.

Chief Meteorologist Alan Holt says landfall is imminent in the area of Brazosport. Holt says the center of the storm "has been all over the place."

According to the National Hurricane Center, Nicholas has now turned into a hurricane.

The center of Nicholas has been erratic since Sunday morning. Look at the changes below from Chief Meteorologist Alan Holt.

Chief Meteorologist Alan Holt said the center of the storm has been shifting since Sunday.

The center of Nicholas has been shifting all over the place; not just tonight, but since yesterday. Because the storm is in btwn radar sites (CRP/HOU), the center is difficult to locate. It appears to be moving parallel to the TX coast. It's possible it's outside the 7P NHC cone? pic.twitter.com/GpmbOF2fos

The center of Nicholas has taken a hard right turn. Check out this radar loop from Chief Meteorologist Alan Holt.

8:15PM - The center of Tropical Storm Nicholas has been finicky today. Check out this radar loop. Nicholas was barreling right toward Matagorda Bay this afternoon, but over the last 2 hours has taken a hard right turn just before reaching land. pic.twitter.com/4ZlgNtFvck

Julissa Garza reports from Rockport with Mayor Rios. Rios said the city has been preparing for the storm since Thursday and he is grateful to storm missed the community that was hit hard by Hurricane Harvey. 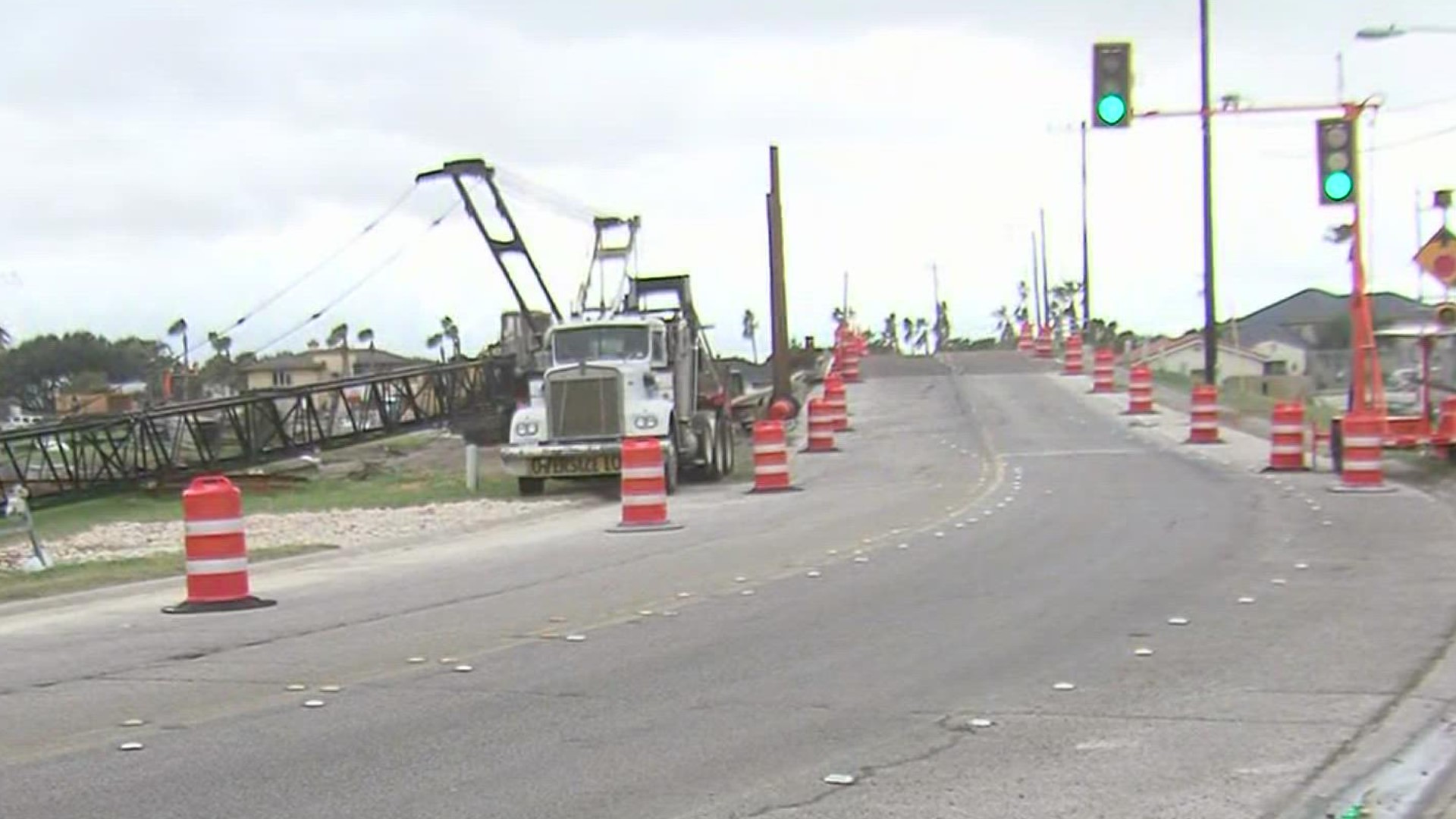 Officials from Corpus Christi ISD announced all district schools will be open on Tuesday, Sept. 14.

Good Evening! While our area may experience some additional wind and rain tonight, we are grateful to have been spared... 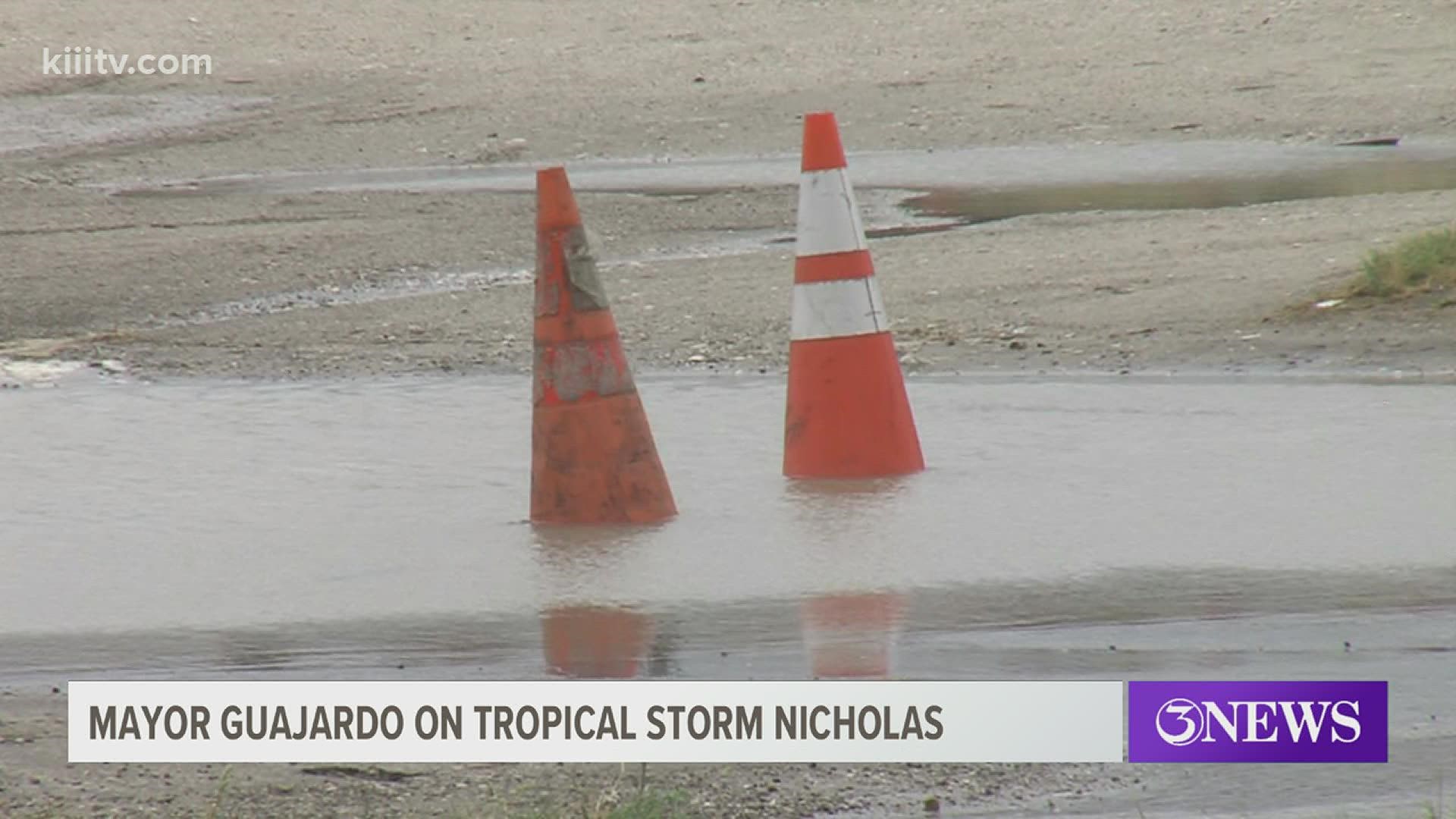 Officials in Port Aransas said although the hurricane watch remains, the storm surge watch is now coastal flood watch. Officials said Port Aransas residents may see some rain but less than 1" additional is expected. There is still the chance for gusty winds, officials said, although this will diminish over the next day.

Due to changing conditions associated with the forecast track of Tropical Storm Nicholas, the DMC Crisis Management Team has decided to open all College facilities and resume normal operations tomorrow, Tuesday, September 14. 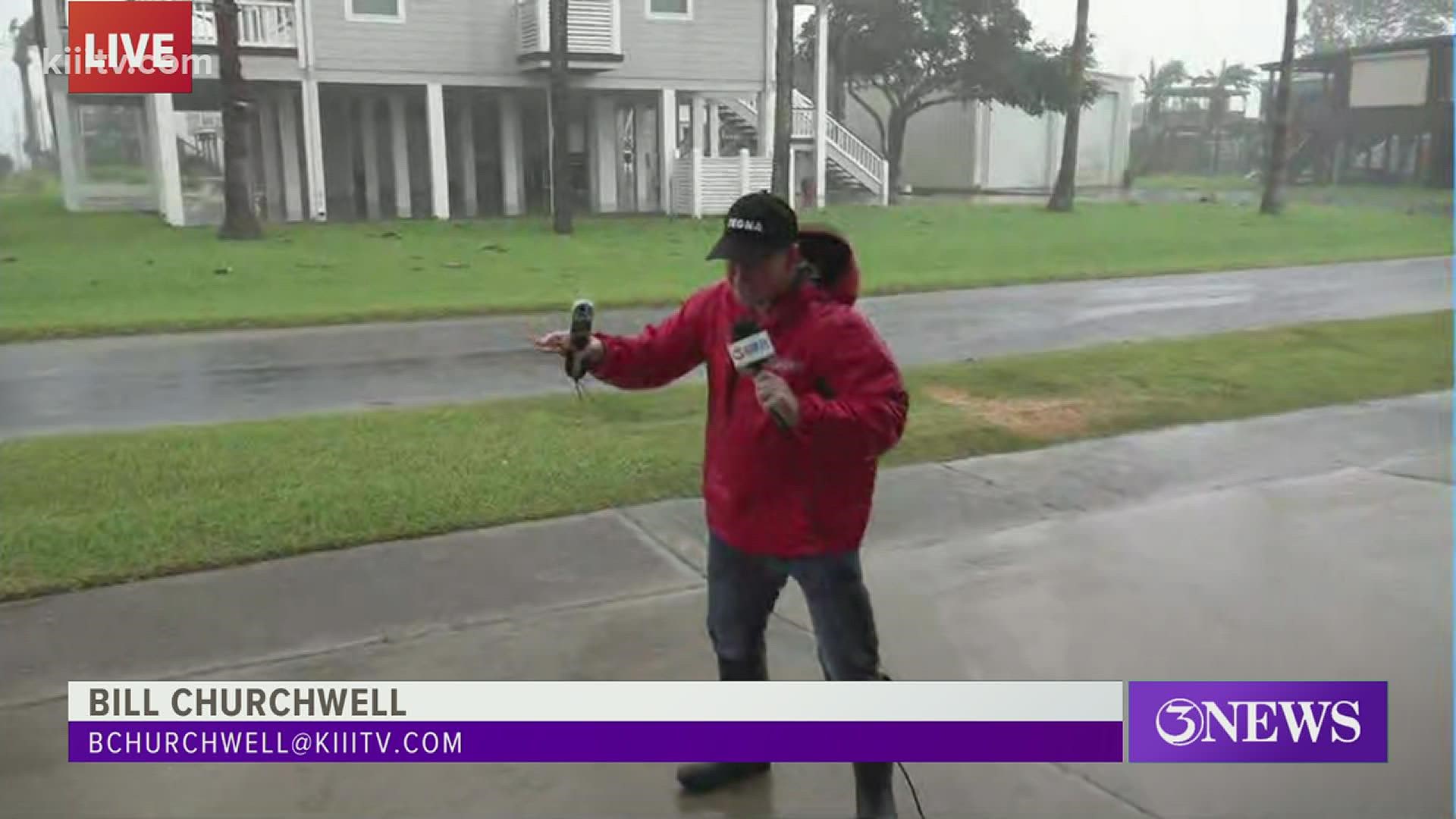 Port Aransas is seeing periods of heavy winds and some rain, but Tropical Storm Nicholas did not leave any damage in the area. 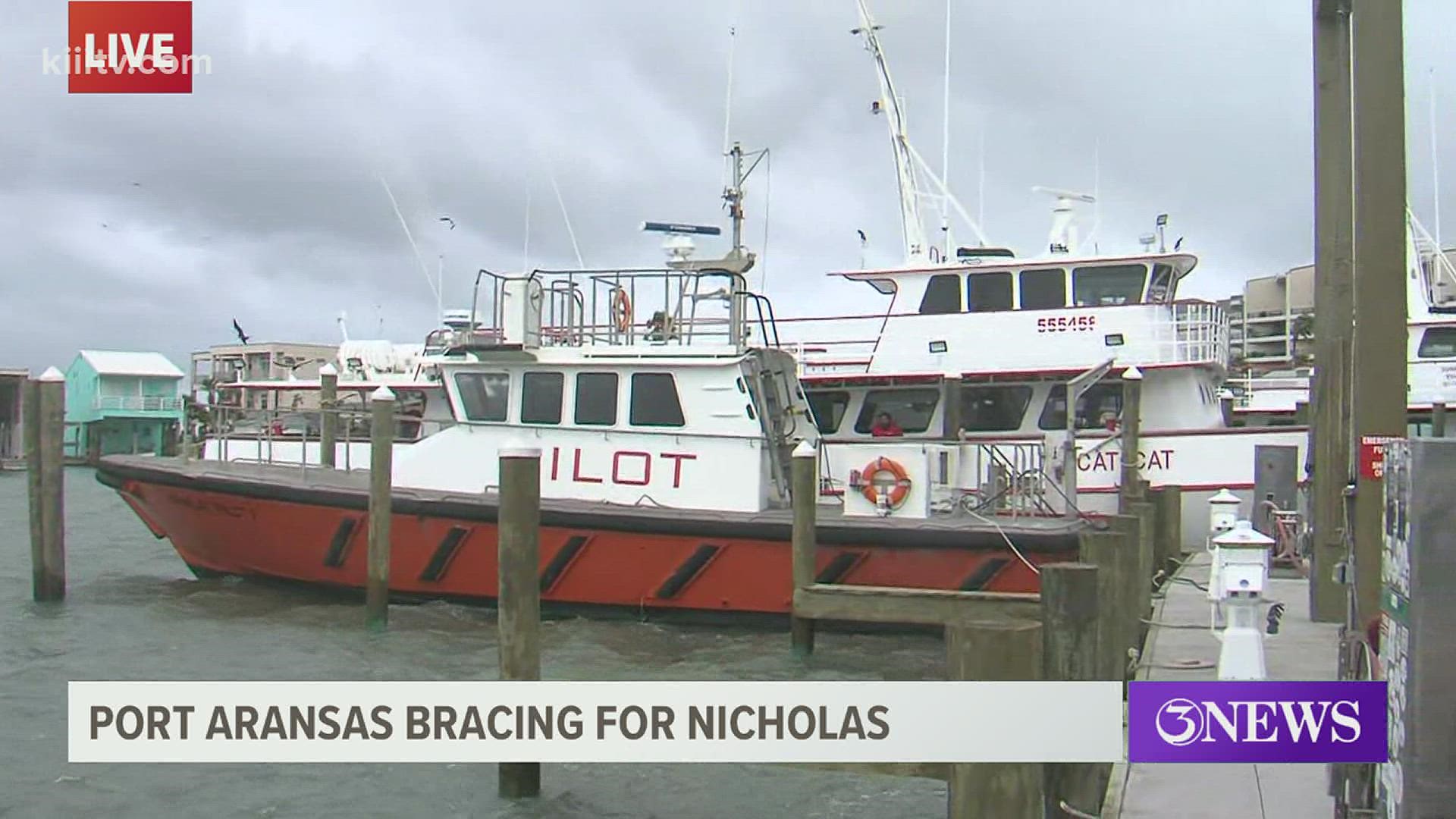 TxDOT's Port Aransas ferry operations remained open throughout Monday - and will remain open, despite high winds and rain spun off by Tropical Storm Nicholas. Captains, crews and maintenance all working in tough conditions to keep this service open to the public. pic.twitter.com/hLK7CdrU3u

Ingleside ISD announced they will return to a normal class schedule Tuesday, September 14. 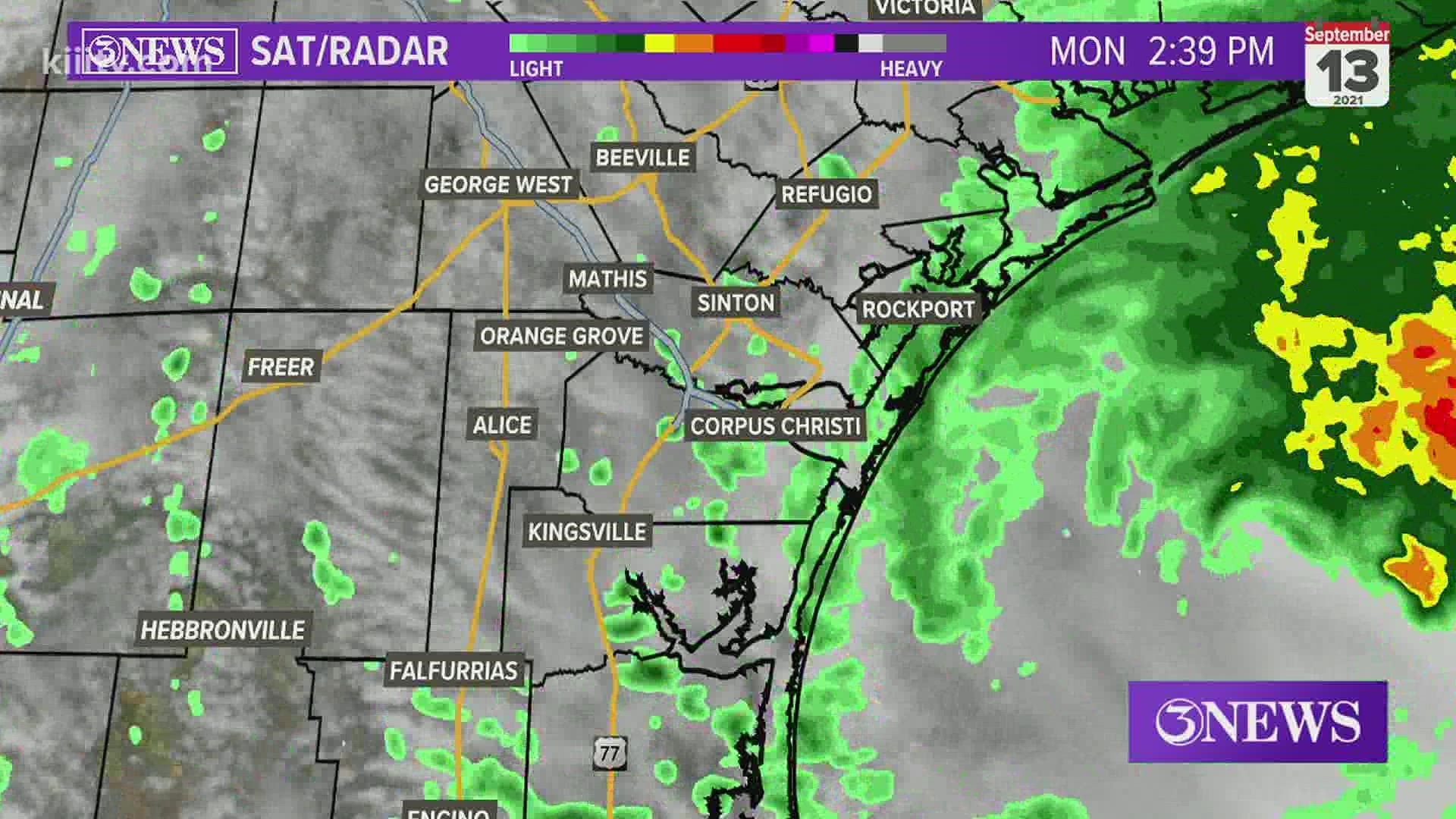 The storm surge in Rockport is subsiding and winds are beginning to calm. 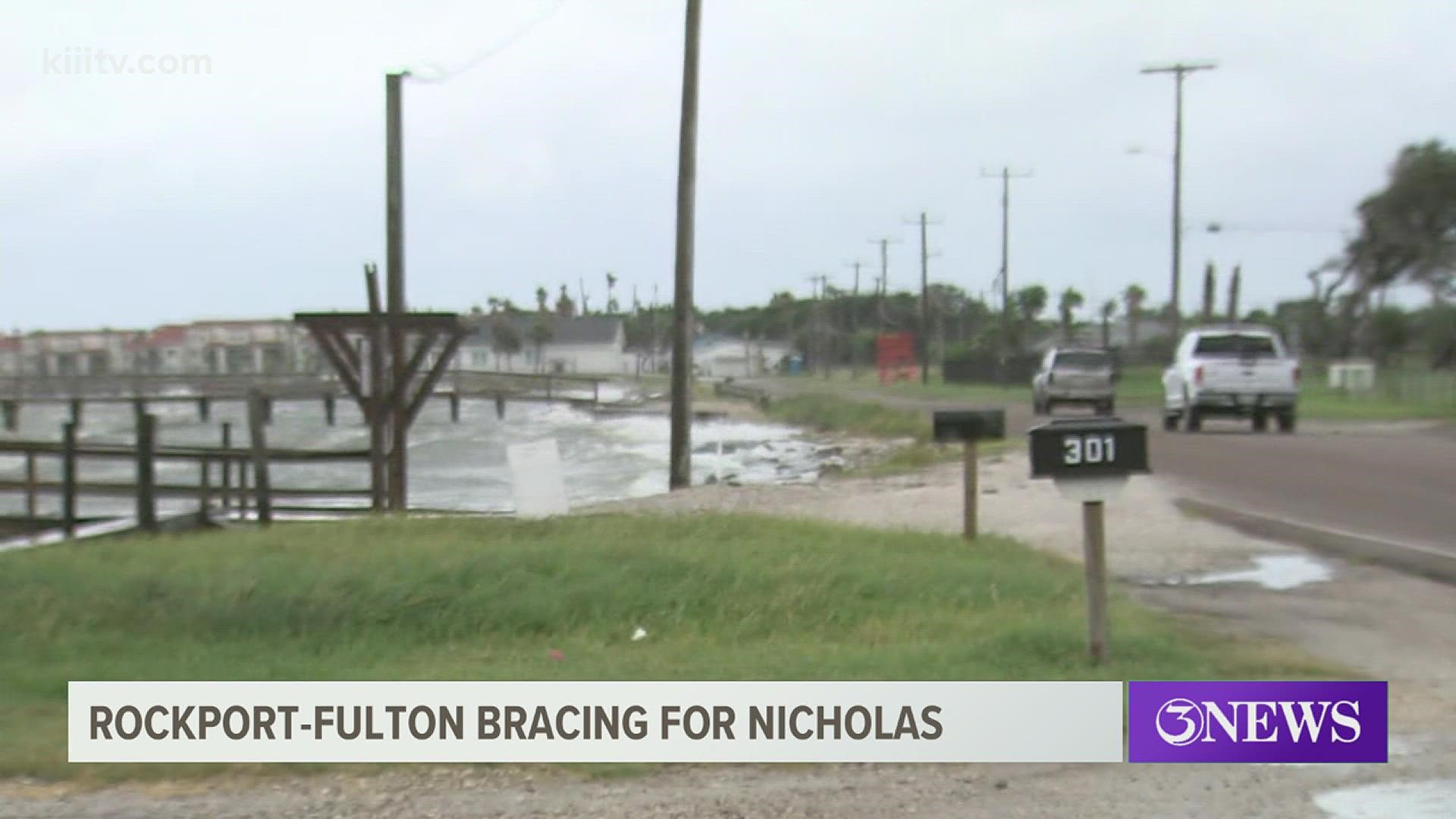 Bill Churchwell is reporting in Port O'Connor, near Matagorda Bay, where conditions are deteriorating ahead of landfall. 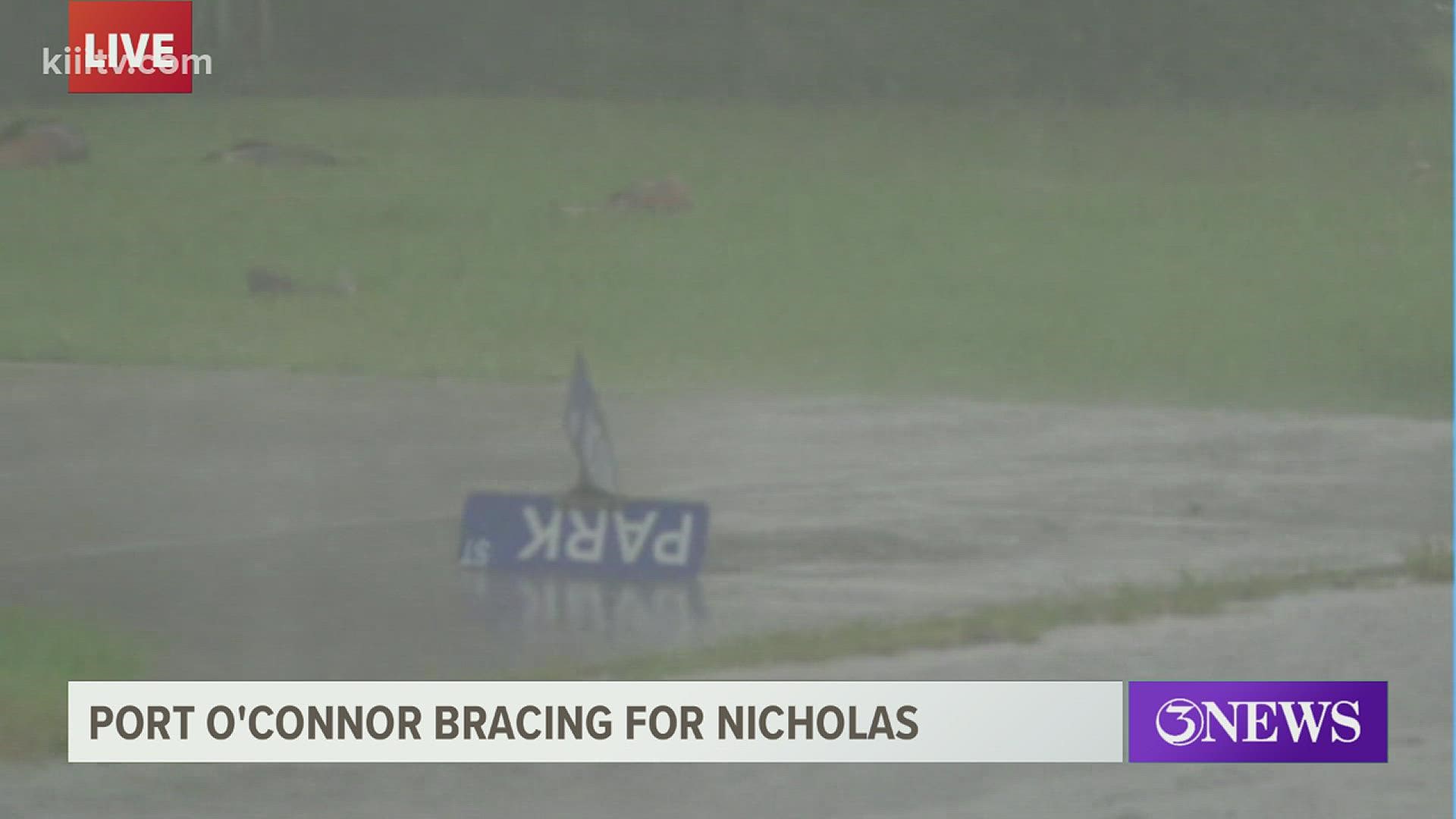 Michael Gibson is in Port Aransas where wind, rain and storm surge are affecting the area. 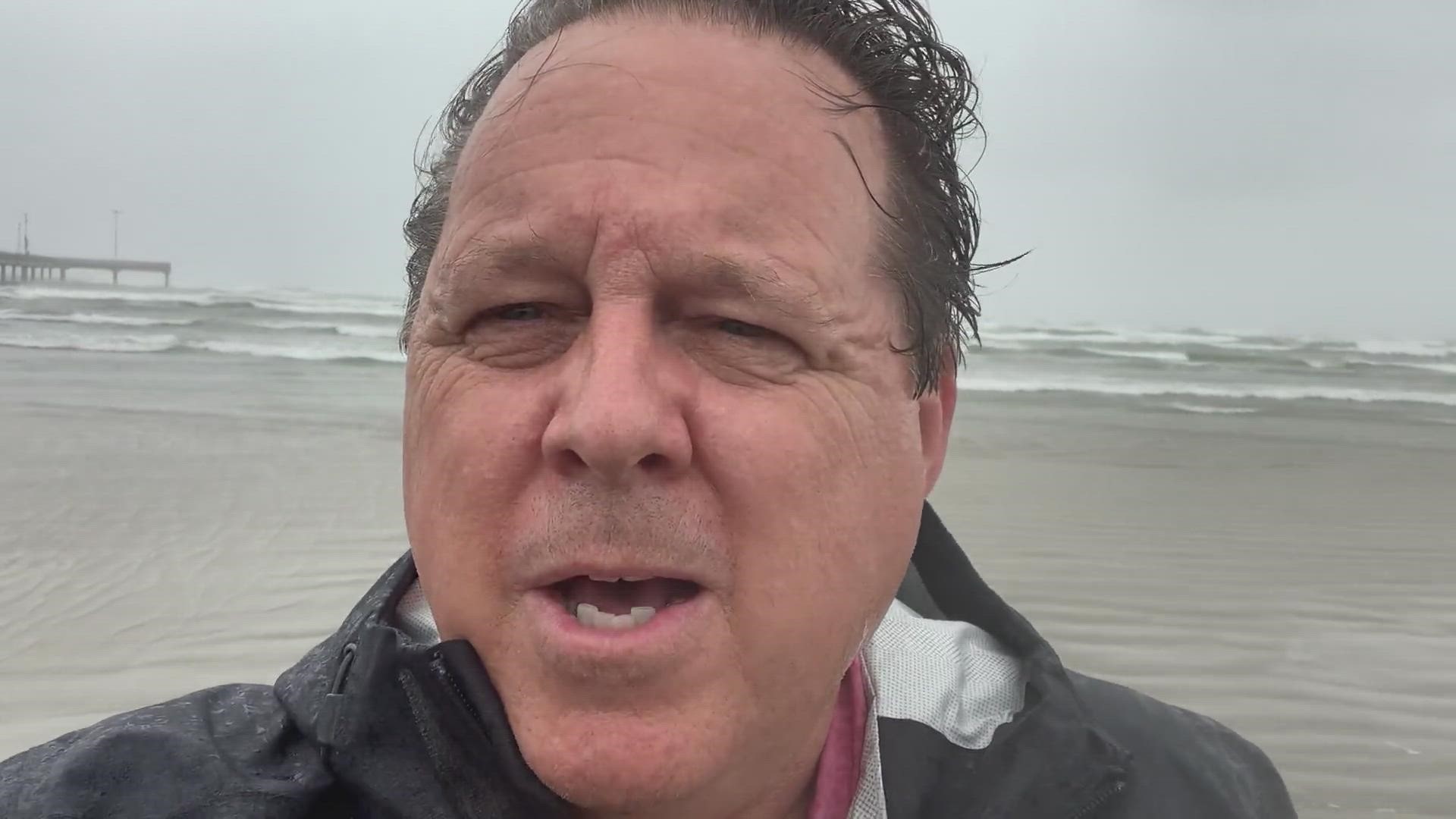 The 4PM NHC update takes Nicholas near Matagorda Bay at landfall this evening as a 70 mph tropical storm.  Nicholas then slows and weakens over SE Texas and Louisiana through Thursday, where flooding rains will be the primary threat - 6-12" possible there.

WIND: Nicholas will continue to bring tropical storm force conditions to parts of the Coastal Bend through Monday night.  Winds will be northwesterly as the storm moves in to the Middle Texas Gulf Coast.

RAIN: With a track a little farther into the Gulf of Mexico, rain totals will be lower, with areas around Copano/San Antonio Bay still getting another 1-3".  Rain (like winds) will be moving in from the NW, wrapping around the west side of Nicholas. Rain chances drop after midnight in the Coastal Bend.

SURGE: Baffin Bay and Corpus Christi Bay will see a reduction in storm surge through Monday night with winds coming in from the N/NW.  Some flooding on the bay side of barrier islands/canals will be possible overnight.  3-5 ft. surge near Matagorda Bay, where landfall is expected. 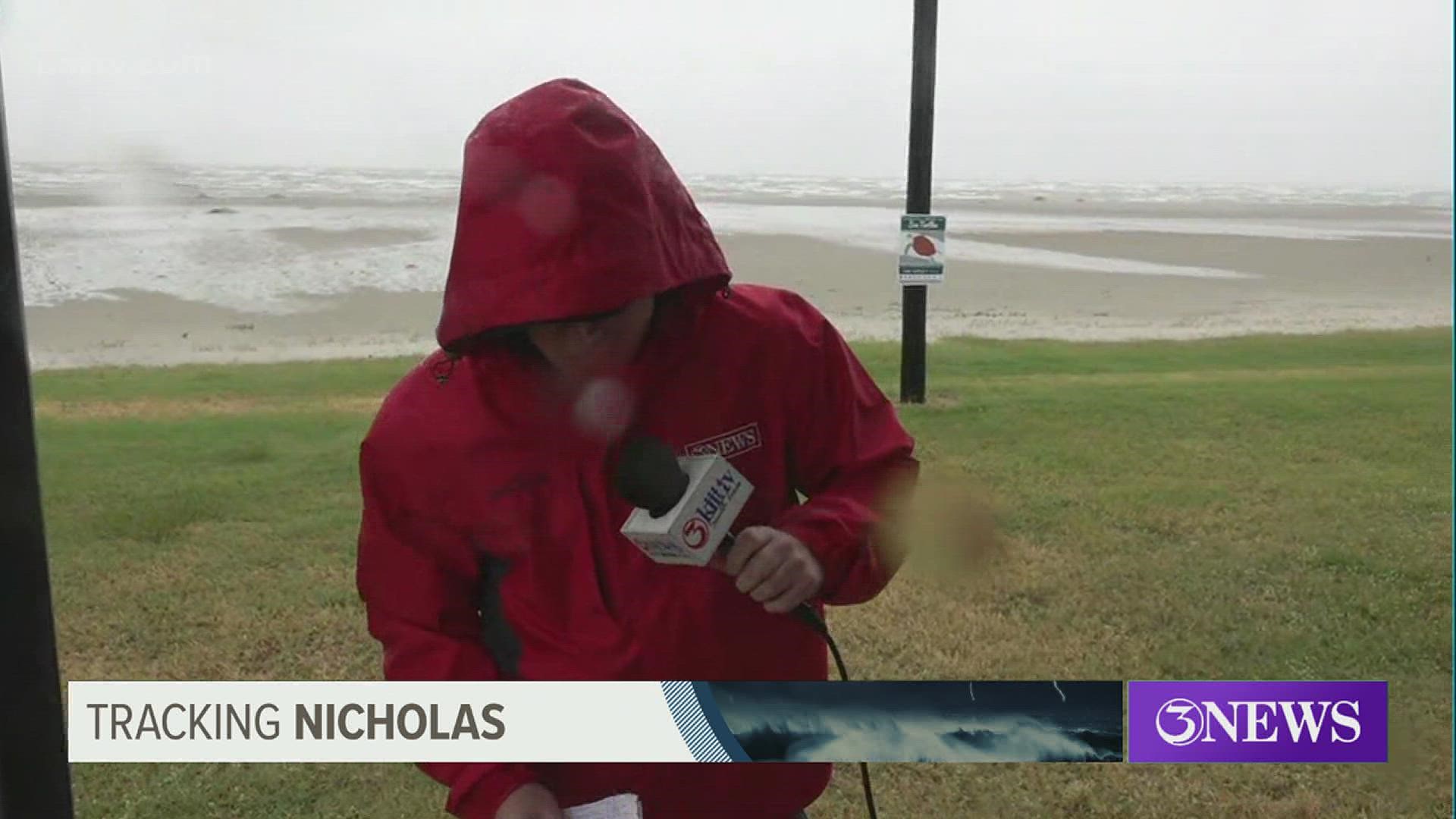 Despite the decrease in rain accumulation, the storm continues to push water into the City’s beaches and beach access roadways. The NWS is forecasting a two to four foot depth of floodwater on our beaches, making them hazardous for drivers. Currently, our beach driving lanes are underwater with surges up to the sand dunes and into many of the City’s access roads.

To reduce the threat to life and property, road closures will be in effect for Gulf Beach Access Roads 2, 3, and 3A, Newport Pass Road, Zahn Road, and Whitecap Boulevard through the duration of the adverse weather. City crews will reassess conditions at sunrise and make adjustments as necessary. These closures have been coordinated with the Texas General Land Office, which is supportive of the action.

Texas Gov. Greg Abbott signed a proclamation for a disaster declaration in response to Tropical Storm Nicholas at a press conference Monday. Three cities and 17 counties were included in the declaration. 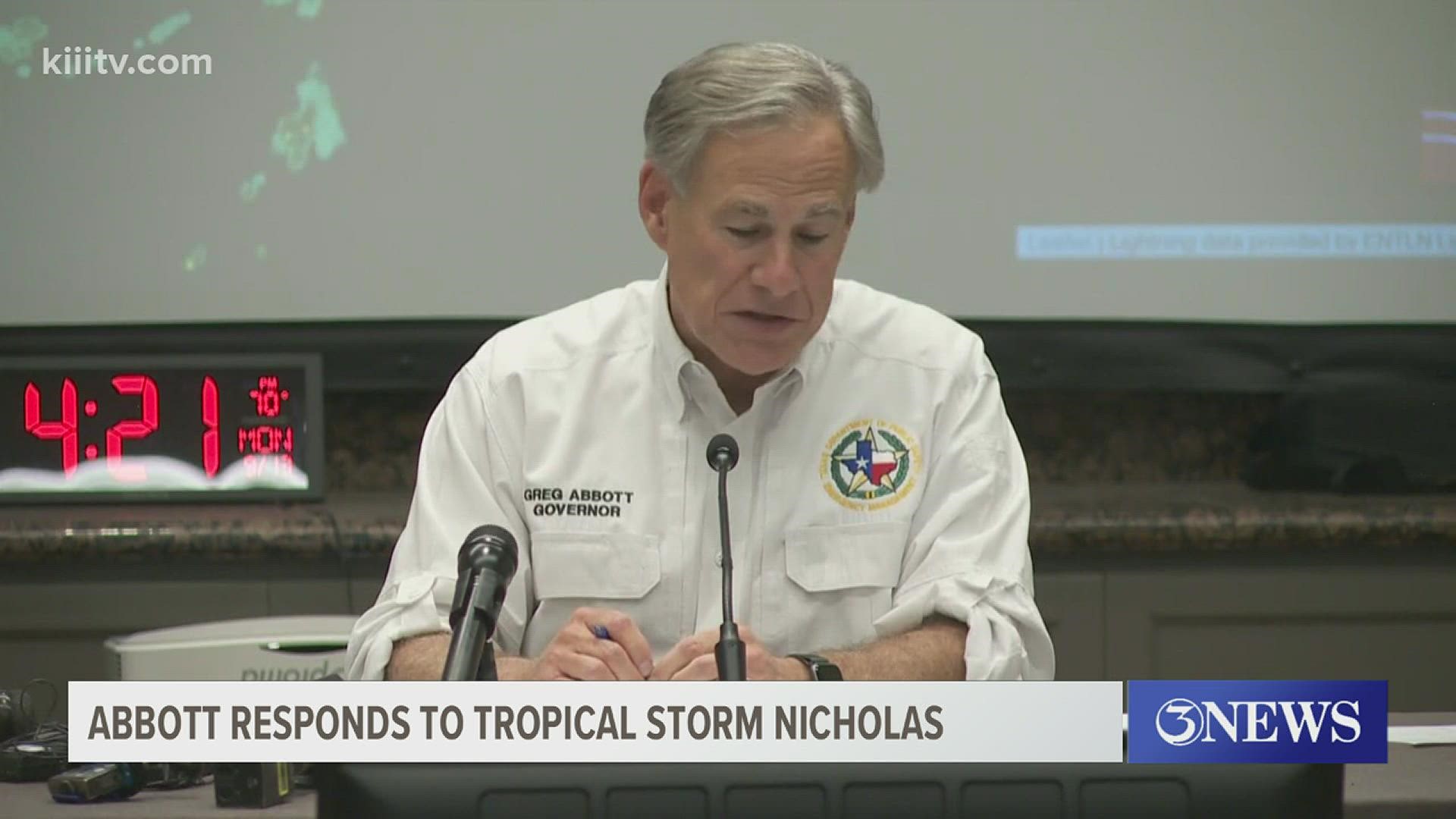 As Tropical Storm Nicholas sits just about due east of Corpus Christi, waves in Rockport can be seen crashing over the seawall. 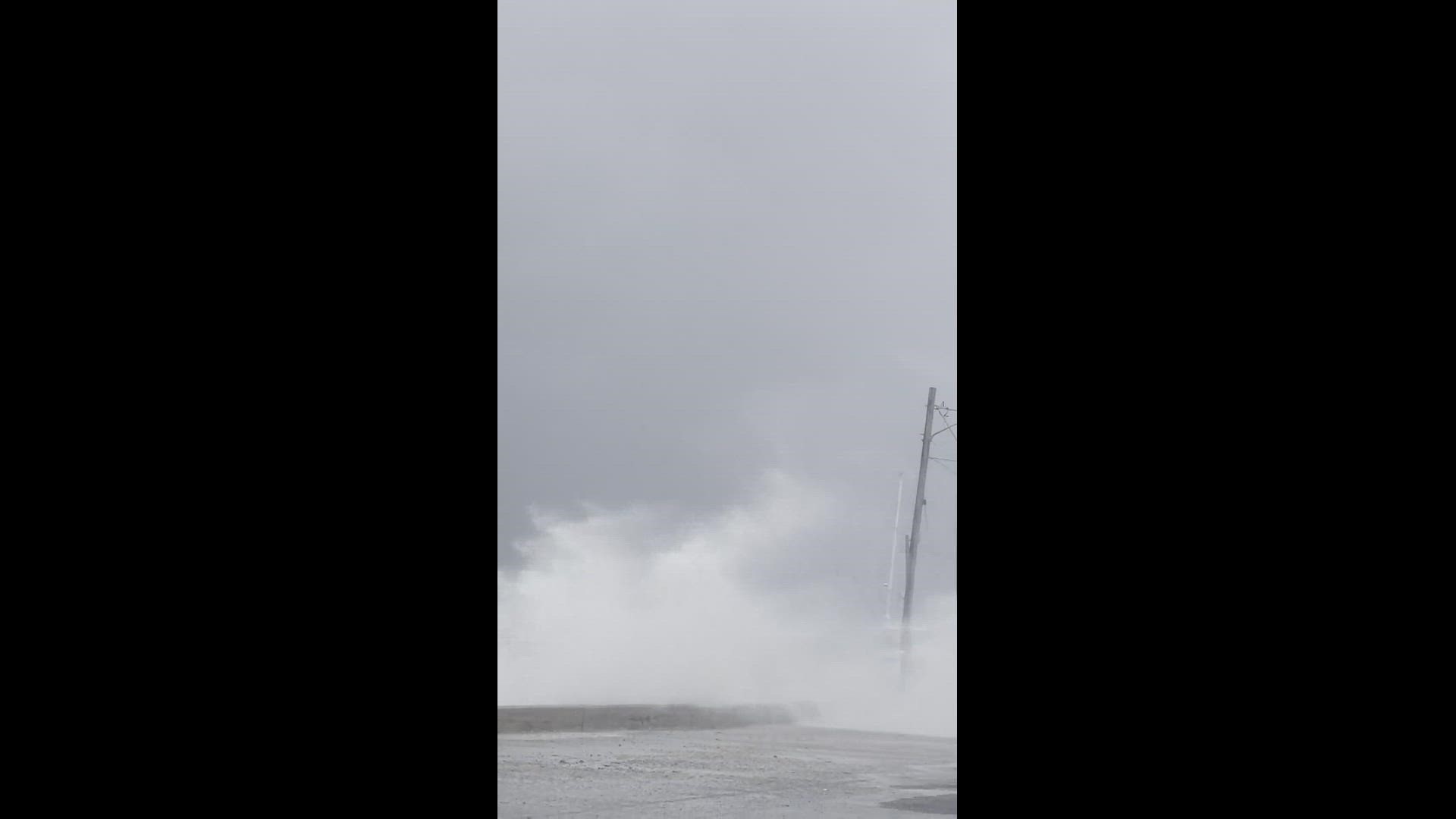 The center of Nicholas shifted more to the east between 10a and 1p. Nicholas is forecast to reach 70 mph sustained winds as it moves in to the Middle Texas Gulf Coast this evening.  With the easterly shift in the center, impacts in the Coastal Bend will be slightly lower.

RAIN: An additional 1-3" through Monday, on top of what has already fallen. Lower amounts west of HWY 77.

WIND: I shifted the max wind speed forecast a little to the east to reflect the easterly shift in the center.  Tropical storm force conditions remain possible for parts of the Coastal Bend.

SURGE: 2-4 ft. on area beaches/bays.  3-5 ft. closer to Matagorda Bay, where landfall is expected this evening.  Waves at 5-10 ft. on area beaches will create rough surf and dangerous rip currents.  Water up to the dunes on beaches. 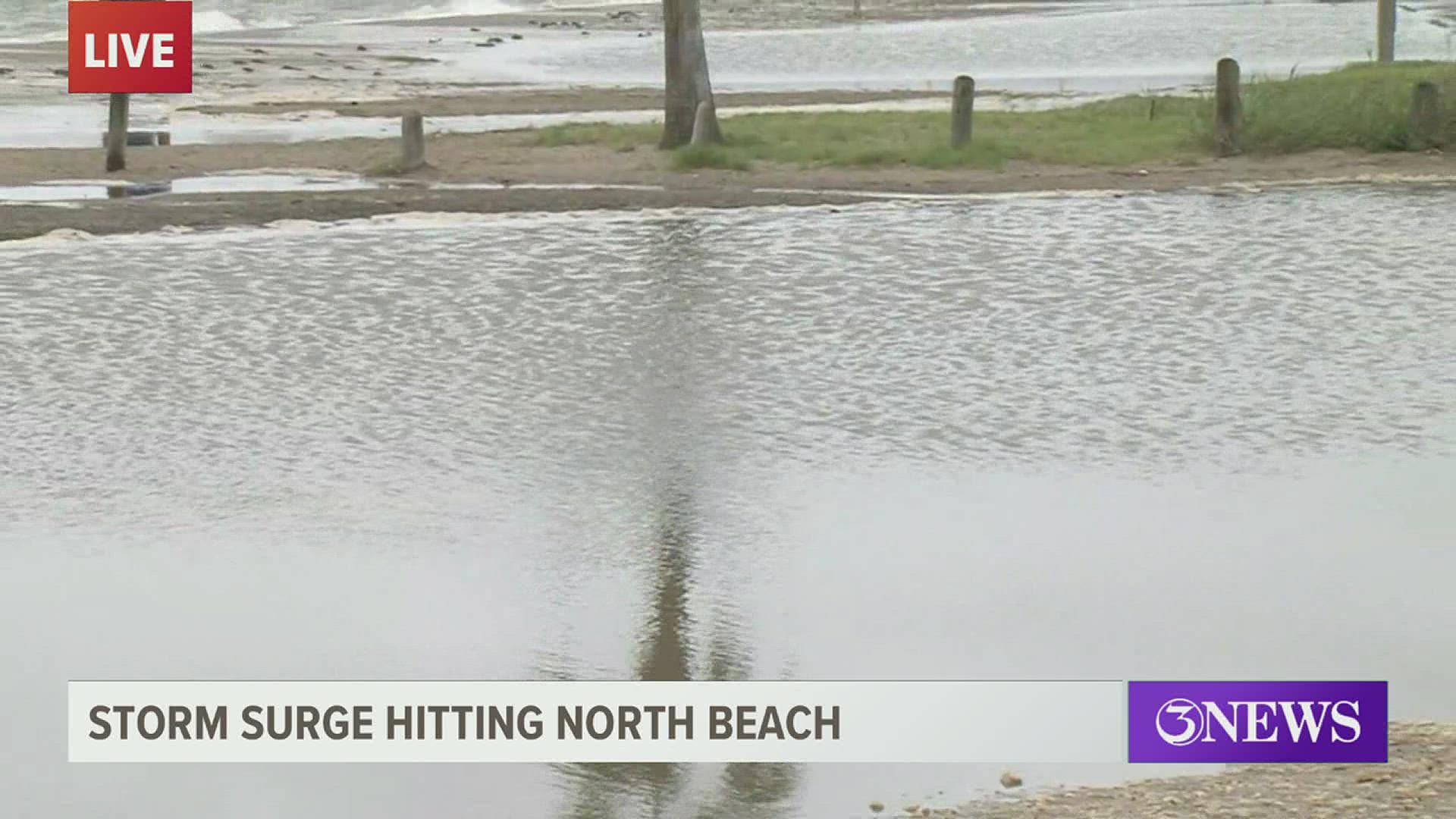 Mayor Paulette Guajardo joined 3News live to discuss the preparations made ahead of Tropical Storm Nicholas. 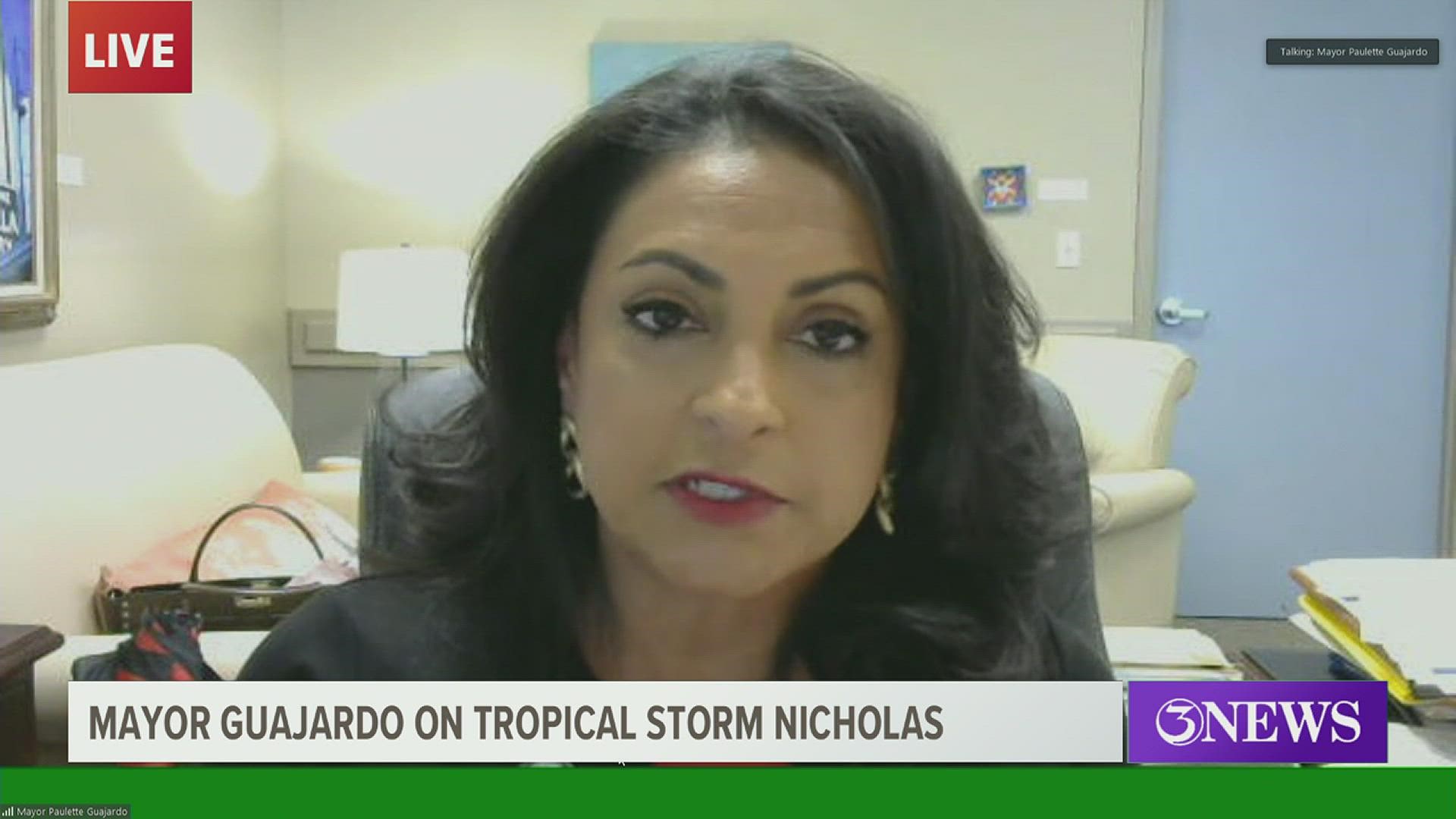 The Padre Island National Seashore has closed the park due to excessive rain, as well as the potential for storm surge and flash floods related to Tropical Storm Nicholas.

Due to the deteriorating weather conditions caused by Tropical Storm Nicholas, two of the three airlines that serve Corpus Christi International Airport (CCIA) have proactively canceled all of their flights for the next 24 hours.  Both United Airlines and Southwest Airlines have canceled all flights in and out of CCIA for the rest of the day. Travelers can visit www.corpuschristiairport.com for the latest posted flight schedules and status.

Kleberg County opened up the FEMA DOME behind H.M. King High School at 10:30 a.m. for any folks needing a dry place to stay during the storm. Crews will be on standby to provide transportation for anyone who needs a ride. Here is the phone number to call: 361-455-9402.

11:20AM - Easterly winds are gusting to tropical storm force (39 mph) in Flour Bluff.

Road closures are occurring due to Tropical Storm Nicholas.

Tropical Storm Nicholas is just off the coast of Texas. Despite warm gulf water, wind shear is keeping the structure of Tropical Storm Nicholas relatively disorganized, along with how close it is to land. Tropical showers are stretching up and down the Texas coast. Wind shear will work in our favor and should keep the storm at bay as it makes landfall tonight.