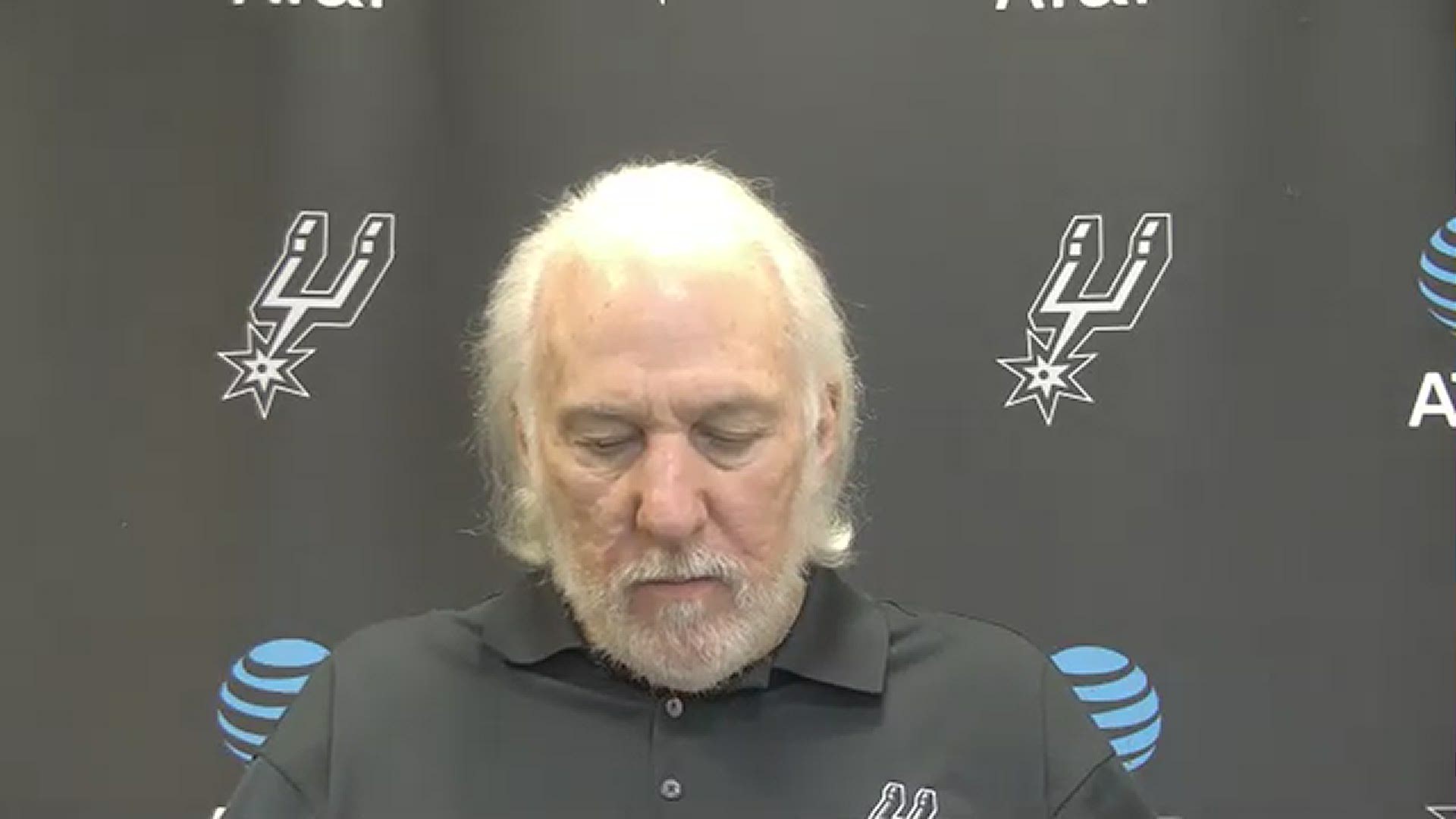 CLEVELAND — It got a little bit too close for comfort at the end, but Keldon Johnson led the San Antonio Spurs to a 116-110 win in Cleveland, becoming the first Spur to put up 20+ points and 20+ rebounds in the same game since Tim Duncan in 2013.

DeMar DeRozan had 20 points and 7 assists in his first game in nine days after his father's funeral. Dejounte Murray and Derrick White combined for 39 points, 10 boards and 5 assists,

After Johnson's dominant effort, coach Gregg Popovich may have bestowed a new nickname on him. 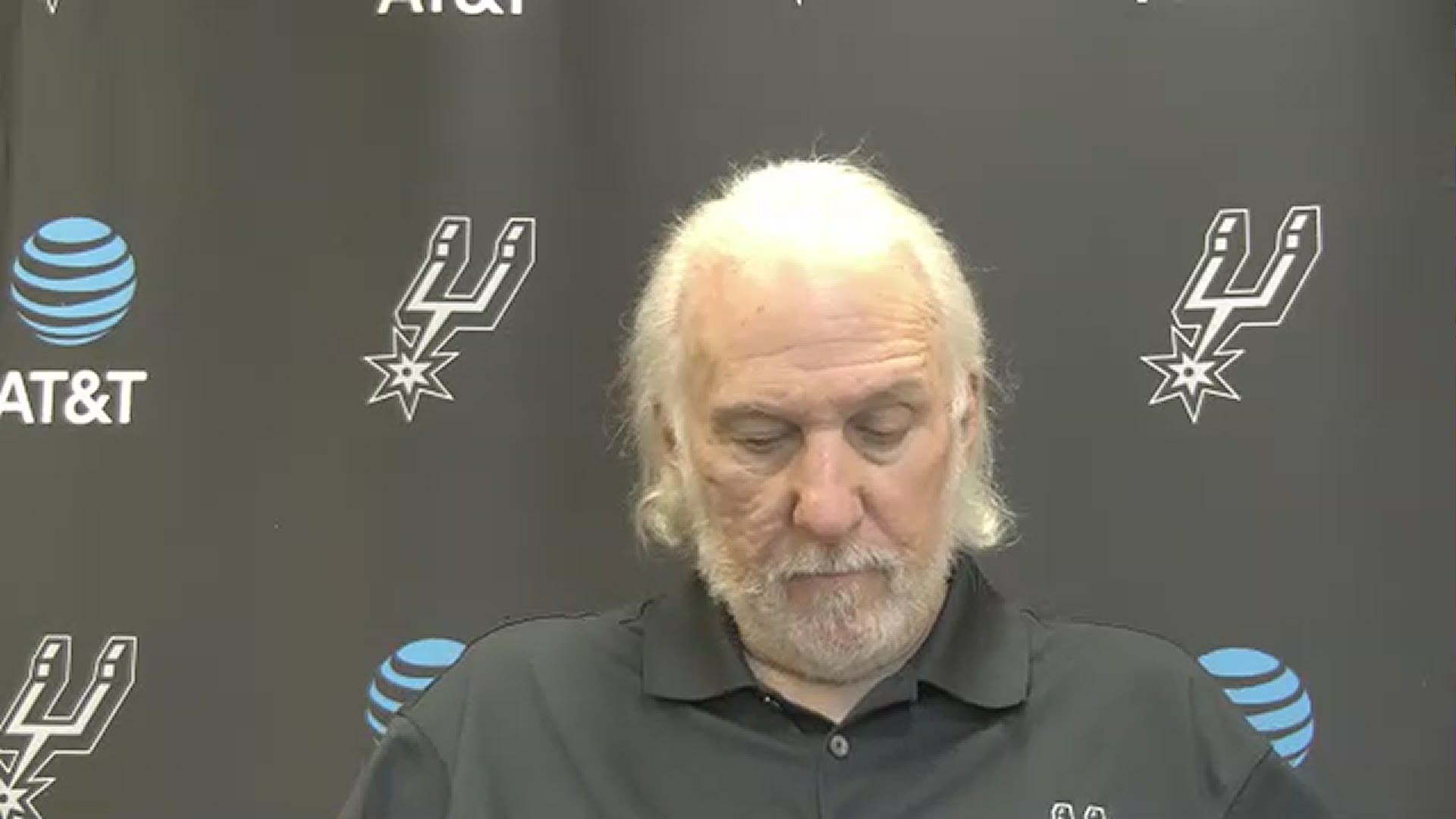 Derrick White had jokes about Keldon's volume on the court, and maybe needing earplugs to survive him off it, but was serious in his praise.

"Incredible, from the first play to the last play, he just played his tail off, got every loose ball, made so many winning plays for us to put us in position to win," he said. 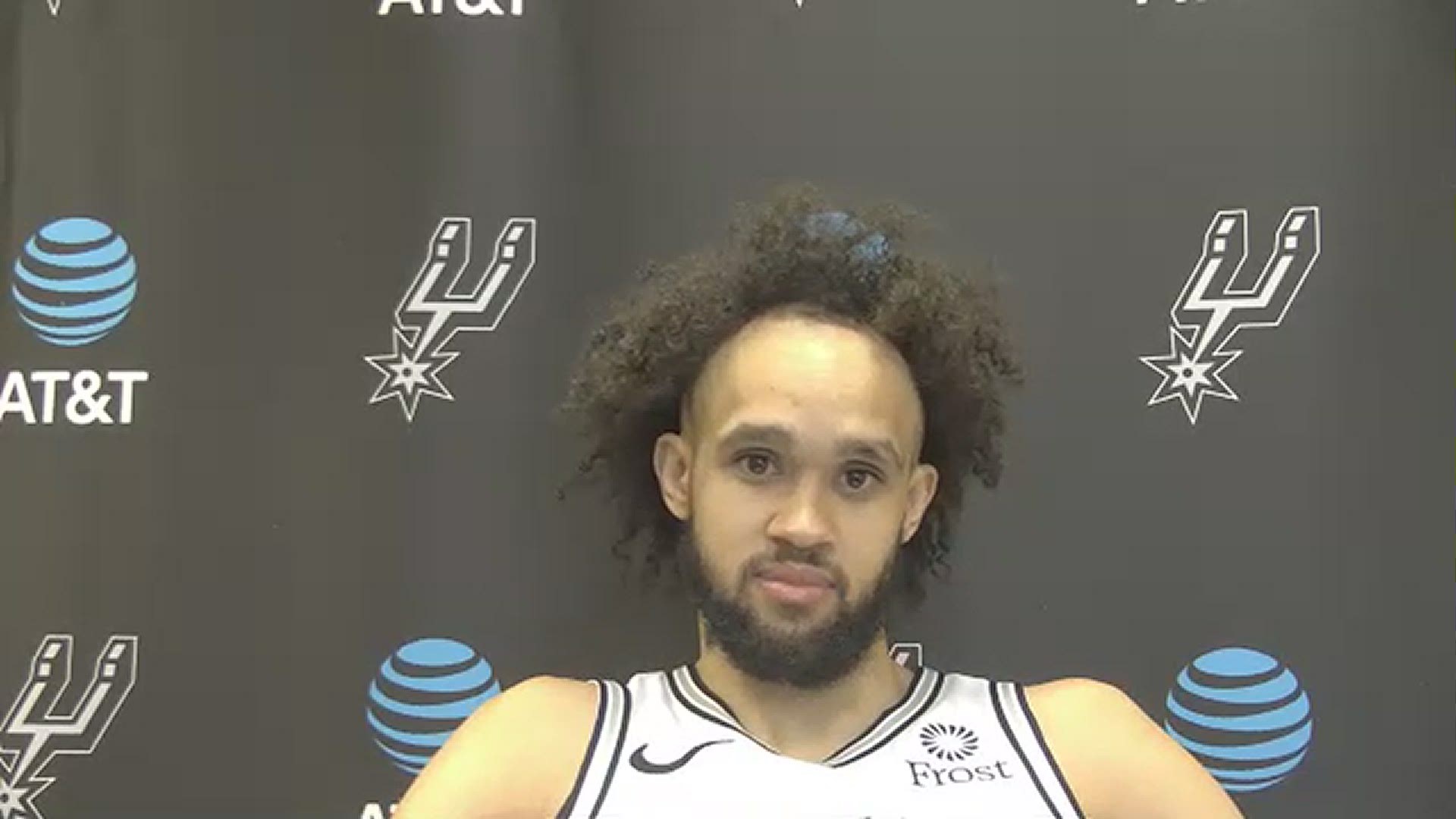 Both Johnson and White recently recovered from coronavirus, and both played over 35 minutes. It was Johnson's career-high for rebounding at any level. He said it came down to wanting it, and as far as screaming and motivating his teammates goes, that's just who he is.

"Just be myself, be Keldon Johnson, if it's yelling after every play, getting my teammates going, then that's what I'm gonna do. I'm just being myself out there and having fun," he said. 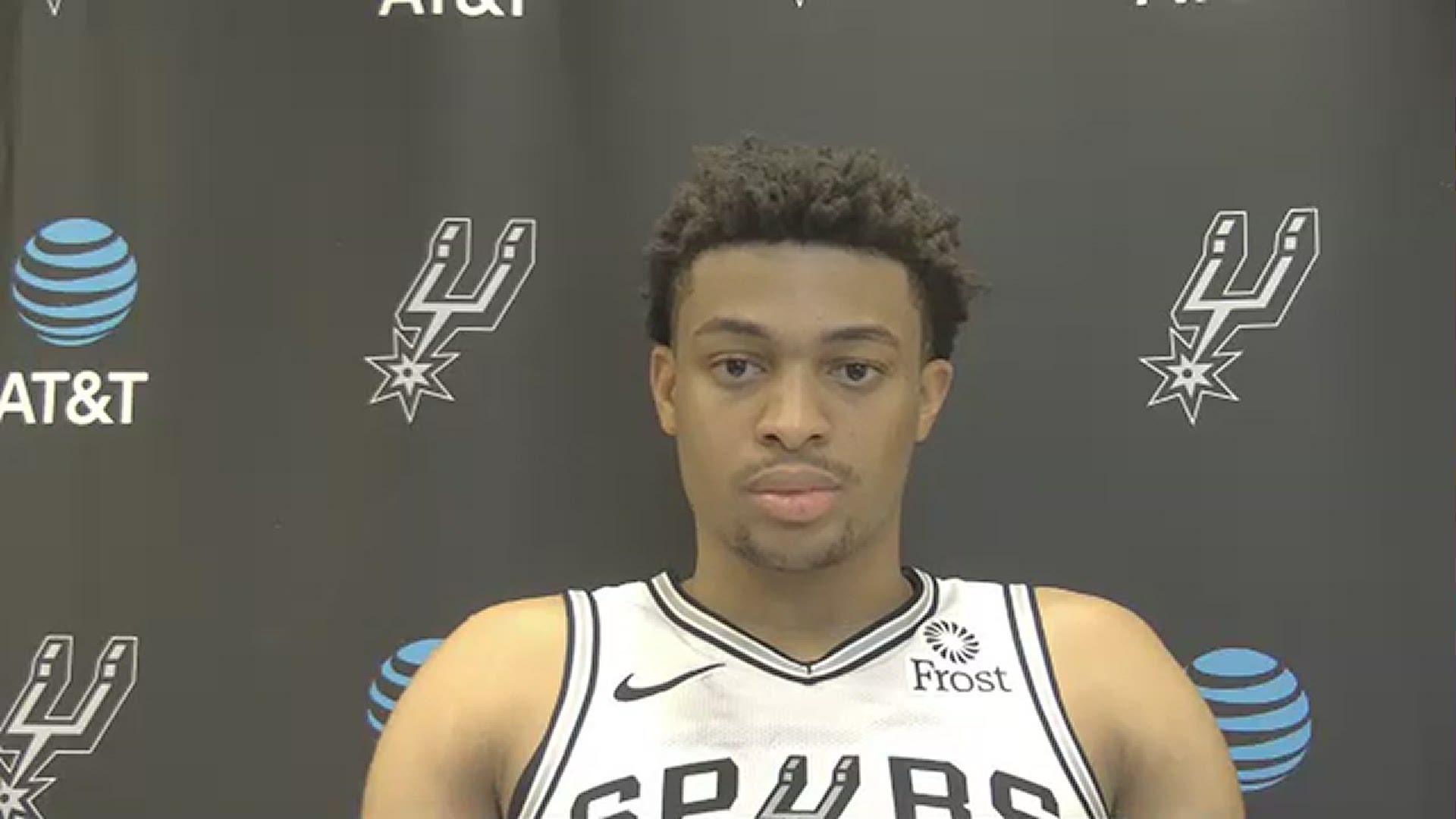 DeRozan didn't look like he'd missed a beat, stepping right in and doing his thing in big moments.

"I mean were we really surprised?" White asked with a smile on his face, shaking his head. "That's just what he do, he a hooper, that's what he does."

Lonnie Walker IV didn't play, and after the game Pop said that he was a little banged up, but ok.

The Spurs played their starters heavy minutes as Cleveland hung around with a pesky fourth quarter. When asked about joining Tim Duncan in the history books, Keldon Johnson was humble, and already looking toward tomorrow night's contest against Milwaukee.

"It's definitely an honor to be in the company of one of the greats, but just gotta keep going, keep pushing, can't be satisfied, I feel like we've gotta go get one tomorrow.

Rudy Gay stopped a 9-1 Cavs run with a triple to put the Spurs back up 16.

Keldon Johnson was leading the team in the box score, and after some hustle plays appeared to urge his teammates to match the intensity Cleveland was playing with.  The Cavs got a few second chances and cut it to 12, costing the Spurs, at the very least, an opportunity to rest starters an extra few minutes with a back-to-back tomorrow in Milwaukee.

Derrick White got stripped as the Cavs busted up a set with dogged defending, cutting the lead to 10.

Dejounte Murray answered, hitting a layup off the top of the backboard and then driving in for a simpler one.

Keldon Johnson grabbed a rebound on the defensive end, then missed a putback, then made a putback. He had 18 points and 20 rebounds, and put the Spurs back in front by 15.

Cleveland answered with a 5-0 run, but DeMar slowed things down in the post and got to the line. He also hit another smooth jumper, but the Cavs managed to cut it to nine with 4:20 remaining.

DeRozan found Dejounte for a driving layup that rolled around the rim and in, and then Murray found Mills on the perimeter for three after great interior defense by Poeltl to send it the other way. That put San Antonio up 102-92 with just two minutes to play.

Keldon drove, missed it, and put it back, giving him 20 points and 21 boards.

Again Johnson got a layup, putting San Antonio up 12.

Cleveland ripped off a late 6-0 run with a couple of steals, but Derrick pushed the lead back to 8 with free throws, giving him 17 points with 40 seconds left.

Nance dunked it, but the desperation defense failed and Murray scored at the rim. Cleveland kept scoring and cut it down to four, but had to foul Dejounte Murray with 6.4 seconds left. He hit both, giving him 22, and the Spurs won 116-110 after losing the fourth quarter 44-35.

Closer than it should've been, but a career night for Keldon.

The Spurs started the second half on a 21-11 run as the Spurs built their lead as big as 22.

DeMar made repeated trips to the free throw line, hitting all four, then hit a couple of mid-range jumpers as well to make it eight in a row.

Derrick White drew three free throws on the perimeter, Jakob Poeltl got a few tip-ins, and when Patty Mills came in the game, he hit two triples off assists from DeMar to push San Antonio's lead to 75-53. Mills also got three free throws.

Cleveland chipped away a bit, but still trailed 81-66 heading to the fourth.

The Spurs righted the ship between quarters, opening the second on a 15-3 run including 11 in a row.

DeMar picked up right where he left off, scoring, then finding Poeltl for a score, the scoring again.

I missed watching DeMar just go get a bucket pic.twitter.com/XNyV4bUzB5

Keldon Johnson exploded like a 2 Liter bottle of Mountain Dew, shaken vigorously by a larger than average child and Gronk-spiked off the pavement. He drove in for a bully ball big body layup and-1, screamed as much, and on a tip-in shot later he had this to say:

Rudy Gay stole the ball and dunked in transition, then he found Derrick White for another jumper to push San Antonio's lead to 15.

Derrick and Rudy kept scoring, and Keldon's persistent attacking on both ends continued. By the end of the half, he led the Spurs in every statistical category.

Lonnie Walker IV wasn't on the injury report, but didn't play at all in the first half.

Spurs up 54-42 at the half, Keldon Johnson leads the Spurs in each statistical category.

San Antonio started the game with perfect execution for a 7-0 run.

After Keldon Johnson drove for a layup, DeMar DeRozan drew a double team in his first action in over a week and kicked it out to Derrick White for an open three. Dejounte Murray hit a mid-range jumper as they stacked stops together, then got free throws.

Derrick getting back into his rhythm pic.twitter.com/Isi0AJnozL

DeMar did his patented "pump-fake, pump-fake, gotcha" move in the post, hitting a tough jumper and the free throw to give the Spurs a 12-3 lead.

Cleveland eventually got a few shots to go to get the game within a bucket, and the Spurs extended it as Keldon Johnson showed off his growing playmaking ability with a few nice assists.

The bench unit struggled, missing their last seven shots of the quarter and turned it over twice. Cleveland ended the quarter on an 8-2 run to make it 25-22.

DeMar DeRozan is back with the team and will play for the first time since the funeral of his father, Frank.

DeRozan was away from the team for four games and the Spurs went 3-1, but none of that matters when compared to the loss of a loved one. Gregg Popovich understood, and offered some profound wisdom.

"He did what was necessary for his family, and I applaud him for that, it's what everybody should do," he said. "Your family loves you, basketball doesn't."

The Spurs had one of their worst first halves in recent memory as Chicago built a 23-point lead, but won the second half 66-41 en-route to the fourth-biggest comeback in the NBA this season.

Starting center Jakob Poeltl had the best game of his career with a career-high 20 points and 16 rebounds, and in that dismal first half, he was the lone bright spot. There were injury scares for both Keldon Johnson and Lonnie Walker IV, but both got back up and kept attacking.

Coach Gregg Popovich was pleased with his team's ability to stick with it and finish the game strong after a brutal start.

"We played two great defensive quarters in the second half, spurred on by Patty Mills' aggressiveness, and it just seemed to infect everybody else," said Popovich. "Offensively we made a few shots, which we did not do in the first half, and Jakob had a wonderful game."

After his career night, Poeltl gave credit to his guards and other teammates who picked up the energy on defense.

"They really got us going in that second half, really picked up the energy on defense," he said. "We were pressing them the whole way, got them to speed up their game and miss some shots. It was really great to see how we came together as a team on the court."