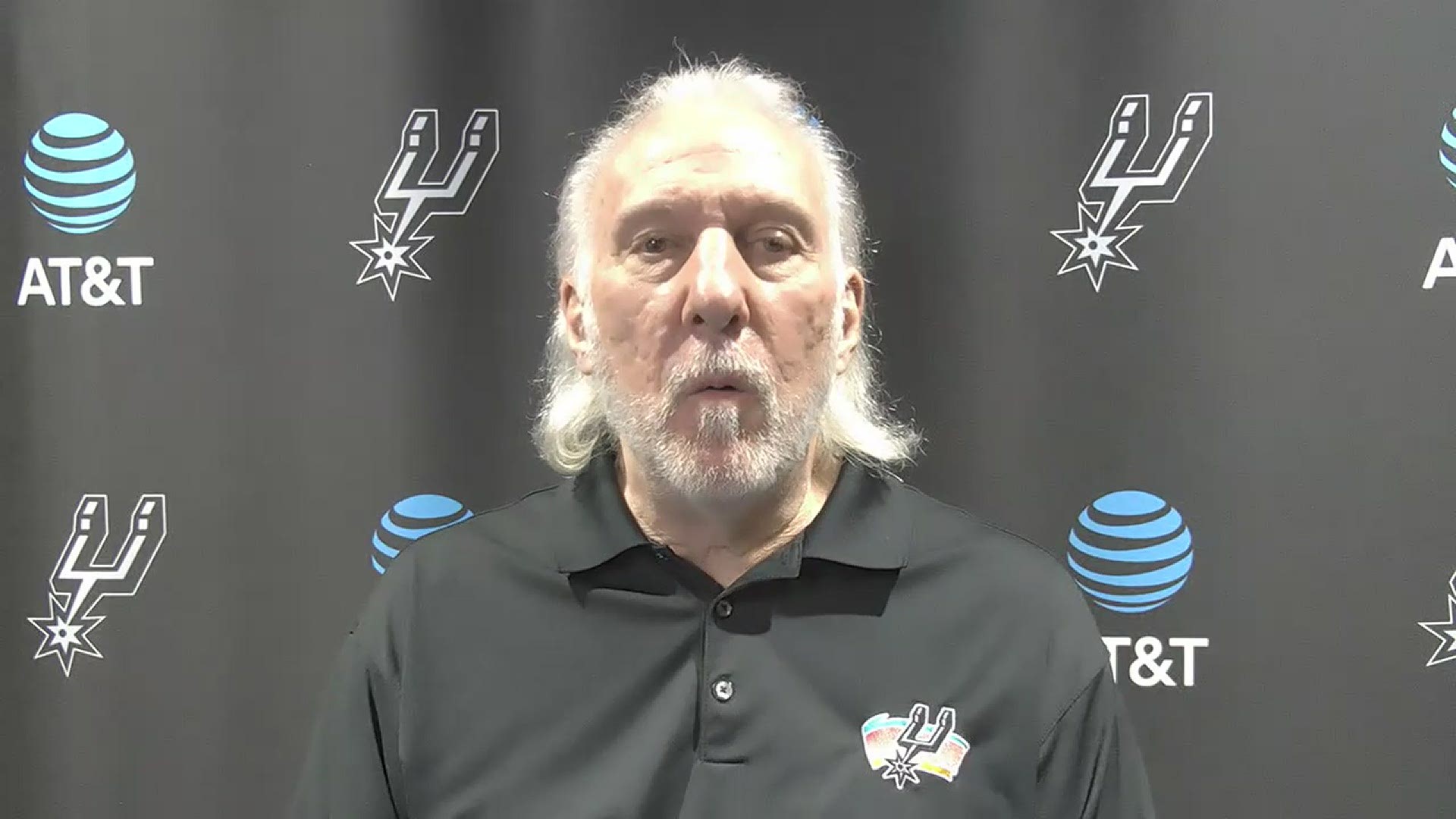 SAN ANTONIO — The San Antonio Spurs couldn't take care of business against a depleted Toronto Raptors team, falling 117-112 in one of the few easy looking games remaining on their schedule.

Pop said that his team didn't play that well, got beaten in a number of areas including physicality, transition, second-chance points, but never stopped competing in the game.

"Considering all that, I thought their effort was great just hanging in the game," he said before praising Toronto's lineup that didn't have much star power, but had big, strong dudes. "They beasted us in several ways, so that big lineup worked well for them."

Derrick White led the way with 25 points for the Spurs, hitting six triples. Patty Mills had 23 points and five makes from deep, as San Antonio made 17-40 from long range in the loss.

"We made shots, but a bunch of the little things we just didn't do well enough to get a win, offensive rebounds, second chance points, stuff like that," White said. "From the start of the game to the end of the game, it cost us." 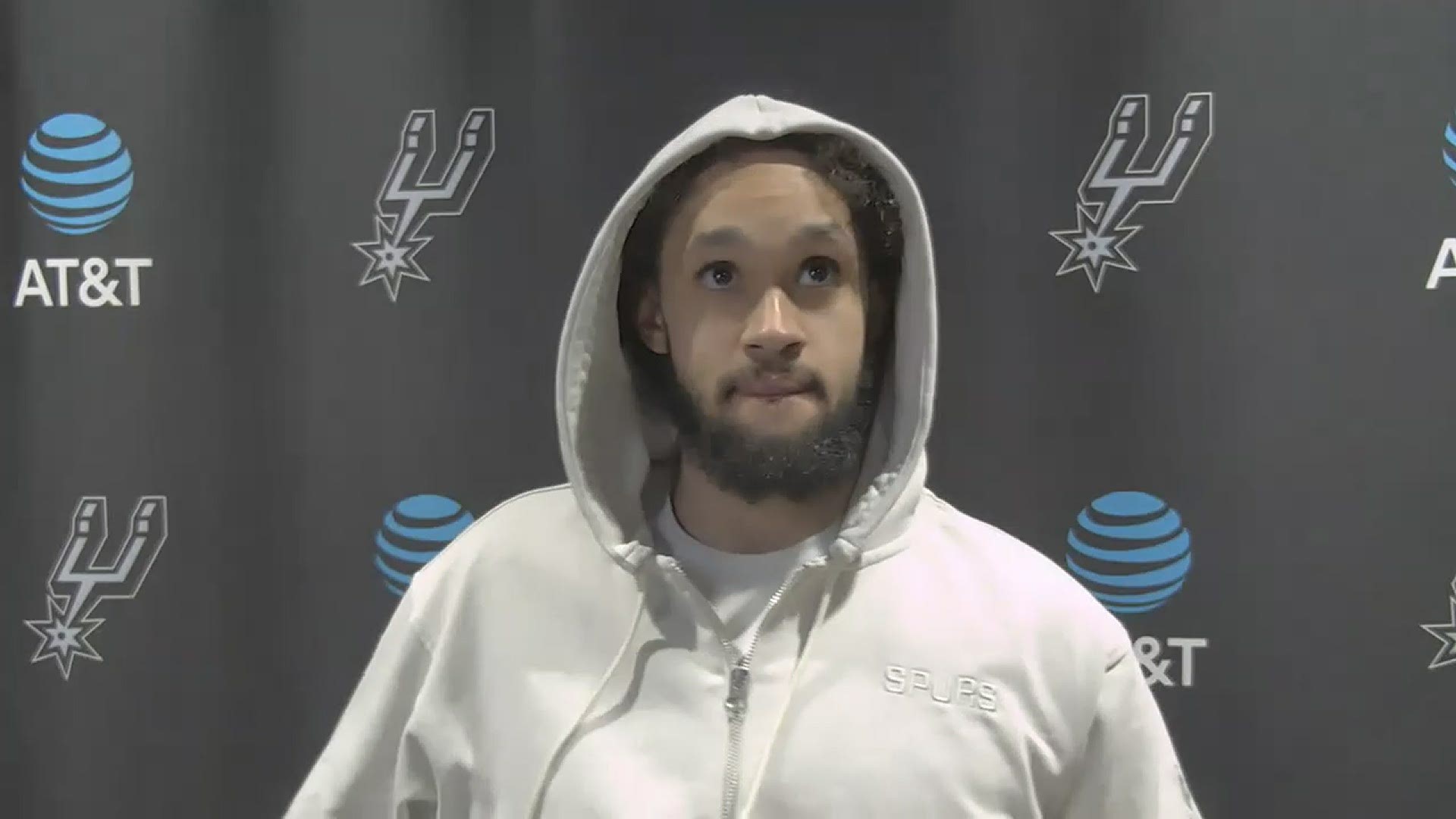 "We made a lot of mistakes defensively, we lost guys, they killed us on the boards," he said. "I feel like everything basically was on us. We've gotta stay smart when we play, no matter who we play against. We've gotta be smart, understand teams are gonna try to mix it up, when they do mix it up, just being prepared for it on both ends." 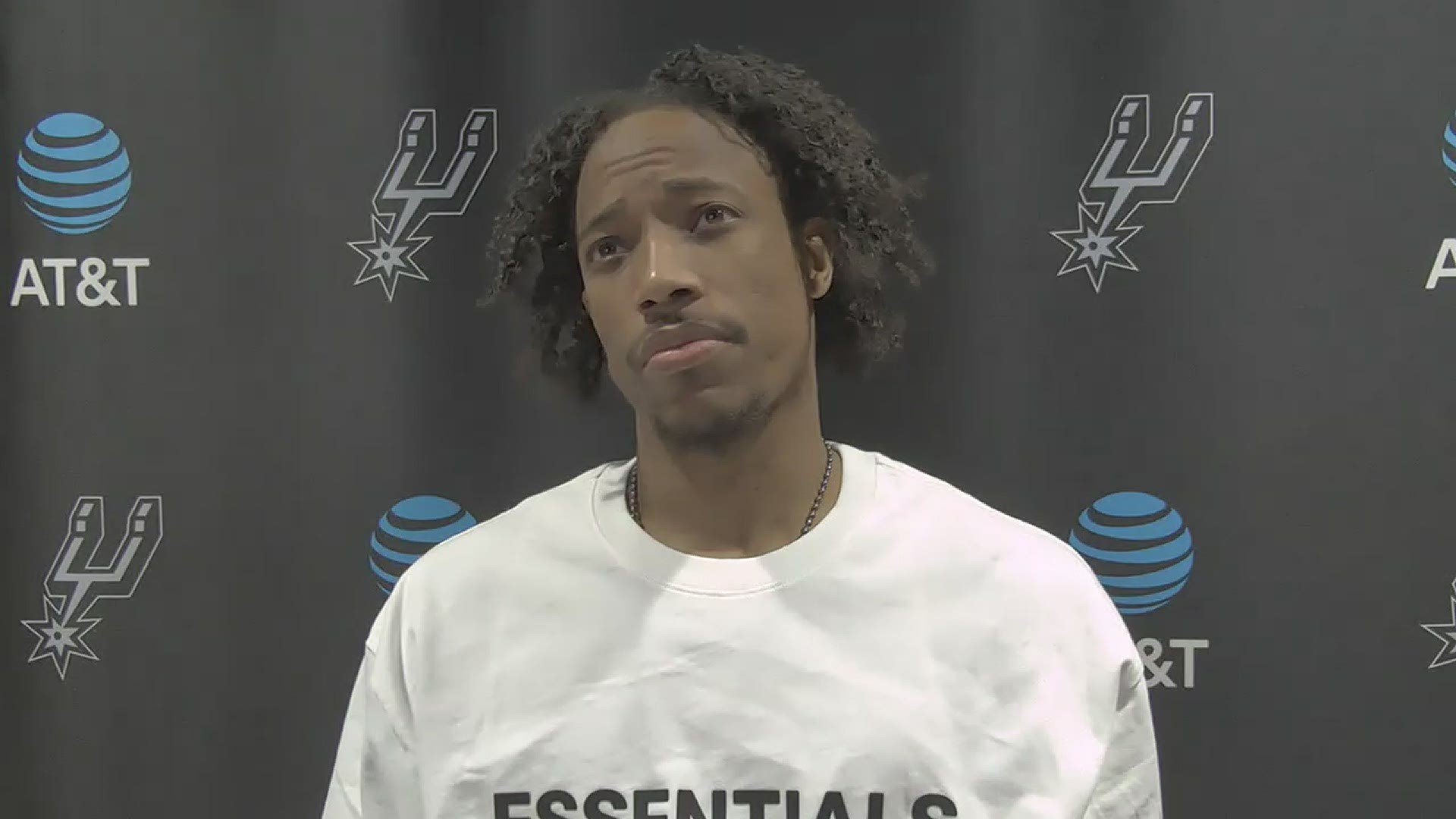 When asked about the tough schedule and hard minutes he's been playing, DeRozan was honest about the mental toll.

"I'm fine physically, I be on top of everything I need to do to be able to recover, be ready for the game to the best of my ability. You have the moments where the mental fatigue could kick in here and there, but you've gotta get through it. Can't make no excuses, it's a job at the end of the day. Just because you got a headache tonight doesn't mean you ain't gotta write something tonight," he responded to the journalist.

San Antonio gave up an open three to start the final period, but Rudy Gay answered with a three of his own.

The Spurs struggled to get stops, as Toronto made shots at a high level to build their lead back to eight. Derrick White tried a few shots from deep and hit one, but he and the Spurs missed big opportunities. Dejounte Murray got a steal and had a sure layup, but the ball just flew out of his hand.

White came off a screen and set his feet for another three, giving him 22 points. Siakam hit a tough jumper on the other end, and Poeltl made a pass that led Murray into the backcourt for a violation.

Toronto attacked in pick and roll, then got to the line to build their first double-digit lead of the game with 6 minutes left. Patty Mills came in and hit a tough jumper. Dejounte made a pass underneath to Drew Eubanks that bounced off his chest and went the other way for easy points.

DeRozan drove in for a powerful jam, but Toronto answered with a triple from Malachi Flynn to go up 11. Flynn posted up Patty, who pforced him into a contested fader that he hit, making it 110-97 Raptors with 3:24 to play.

Patty drove in for a scoop layup, and White led the way on a defensive stop. Gay got an open three, but missed. Toronto went back up 13 on a thunderous putback dunk.

DeRozan drove in for a layup, hit it through a foul and got the free throw, then helped force an 8-second violation. On the ensuing possession, he got free throws.

On the next trip down, Toronto made an unforced error and lost it out of bounds. Dejounte won a jump ball over Chris Boucher, and DeRozan drove in for a jam to make it 112-106 with 55 seconds left. Siakam got free throws, making it a lot tougher.

Derrick White got three free throws quickly, hitting them all to make it five points with 33 seconds to go. They fouled with 20 seconds left and got one miss.

Dejounte Murray hit a quick contested three, cutting it to three but forcing the Spurs to foul. Toronto hit the free throws and won 117-112.

Pop said the team didn't have the necessary physicality tonight

Toronto opened the second half on an 8-1 run, building their lead out to eight. Derrick White picked up another tough foul and went to the bench for Lonnie. DeMar threw a look-away pass to Dejounte in the corner for three.

DeMar with a slick feed, DJ swishes from the corner pic.twitter.com/oD4LsUsiD1

Then DeRozan split through defenders for a circus layup that he made look simple. DJ caught at the arc and attacked, but only got one free throw.

Pascal Siakam went the other way to put the Raptors up 70-64, drawing a timeout from Pop. Out of it, an air-ball three by Walker was saved by Poeltl right to Toronto for another layup.

Lonnie got to the line in transition, hitting both. The Spurs played pressure defense, but Toronto broke it and hit a three to build their largest lead at 9.

DeMar found Drew Eubanks for a polite dunk, and Patty got to the line with an early bonus to cut it back to 5. Eubanks made a forceful rejection, then got fouled on a dunk attempt.

Walker hit the turbo boost in transition, finishing through a defender to make it a 7-0 Spurs run. DeMar drove, drew a double, and hit Derrick for an open three to tie things up at 76. On the next possession White was left open in the corner, and DeMar found him again for a three to take the lead.

DeRozan tried a poster dunk and missed, but the ball came to Drew Eubanks who crammed it with pure fury. He mean mugged, much to the delight of DeRozan and the rest of his teammates, then smiled a whole bunch.

DeRozan got to the line and hit one of two to tie it at 82, but Toronto hit a three to put them up 85-82 with a quarter to play.

Lonnie Walker continued San Antonio's hot shooting from deep, drilling a deep one on a feed from Dejounte Murray.

Lonnie looks so confident everywhere in the floor offensively
pic.twitter.com/QRAQtHAXtH

A few possessions later, Murray found Mills for his fourth triple of the game. Mills started hunting his shot a bit, without generating the same result.

Pascal Siakam did some scoring damage against the bench unit for the Spurs, putting Toronto back in front. Dejounte found Keldon Johnson for a layup in transition, then hit him again as he drove in for a powerful dunk.

Derrick White took a charge, and Dejounte Murray dropped his man with a crossover before floating one in.

Patty came back in and got open for his fifth three of the first half. DeRozan drove and kicked to Keldon, who hit his second three of the contest. The Spurs forced a turnover, and on the other end DeMar drove in for an acrobatic and-1 to put San Antonio in front 55-53. When DeRozan missed his next, Jakob Poeltl was there to clean it up.

Derrick White drilled a three off the window to start the game, getting San Antonio going from deep.

Always good when Derrick gets the first one to go pic.twitter.com/WIe3BewkjN

White passed to Keldon Johnson for another three, then caught another feed from DeMar to make it 3-3 from beyond the arc for the Spurs.

Keldon relocates and knocks it down pic.twitter.com/mmQTkid8la

DeMar DeRozan pumped, drew the foul and hit the shot, then Dejounte Murray got a second-chance bucket. Jakob Poeltl finished in the paint, putting the Spurs up 17-10.

OG Anunoby hit his third triple of the game, giving him 11 to start. Chris Boucher got a putback and hit a three to give Toronto the lead. After another Raptor three, Pop called timeout down 21-17.

San Antonio's bench unit came in, and Patty Mills dribbled around a screen to knock down a triple.

Doesn’t get much simpler than giving Patty a screen in triple threat for three pic.twitter.com/O9FnjUc2sC

Lonnie Walker IV drove, slowed down, and kicked it to Patty for another trey.

Mills drove, pulled it back, and pulled up to swish a mid-range shot. DeRozan fed Drew Eubanks and forced a foul. Drew hit the first and missed the second, but DeMar grabbed it and found Patty for his third triple of the game.

Lonnie drove in for a strong take, finishing through contact.

Fresh off a big win over the Magic in Orlando, Spurs coach Gregg Popovich didn't sugarcoat things when asked if the bus ride to Tampa Bay was a bonding experience.

"No," he said bluntly before a long, comedic pause. "It's difficult to bond with people who are asleep." 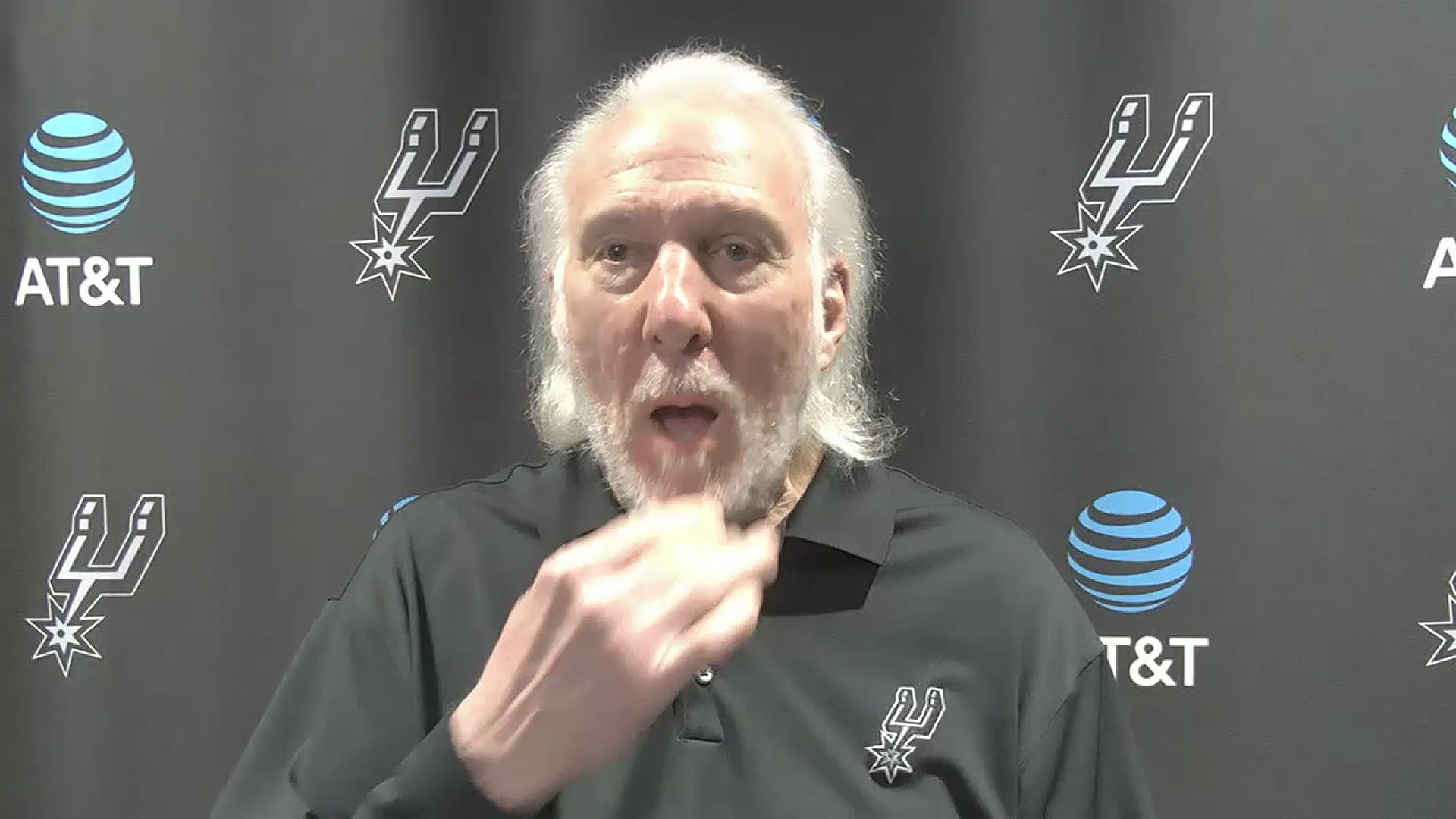 San Antonio is playing a particularly rough portion of their coronavirus-condensed schedule, in the middle of 10 games in 16 nights. Opportunities for rest will be few and far between, but this Raptors team is shorthanded, and a strong showing from the Spurs early could leave the fourth quarter as development time for the young guys and rest for everyone else.

Toronto will be without Kyle Lowry, Fred VanVleet, and Gary Trent Jr. San Antonio is still missing Gorgui Dieng and Trey Lyles, but Lonnie Walker IV has made a huge impact in the three games since he's returned.

If the Spurs get their third-straight win tonight, they'll move above .500 once more. If they don't, it will be a missed opportunity they really can't afford at this stage in the season.

The Spurs got exactly what they needed with a blowout win over the Orlando Magic, putting them away early on the road on the second night of a back-to-back.

The Magic took a 13-7 lead early, but San Antonio responded and blew them out of the water from that point forward. It was the second win in a row, and on short rest starters played under 30 minutes and young guys got to use the fourth quarter to develop.

Recap all of the action from Monday's game here.