He was once among the sheriff's top brass. Now, he's running to oust the sheriff he once worked alongside. 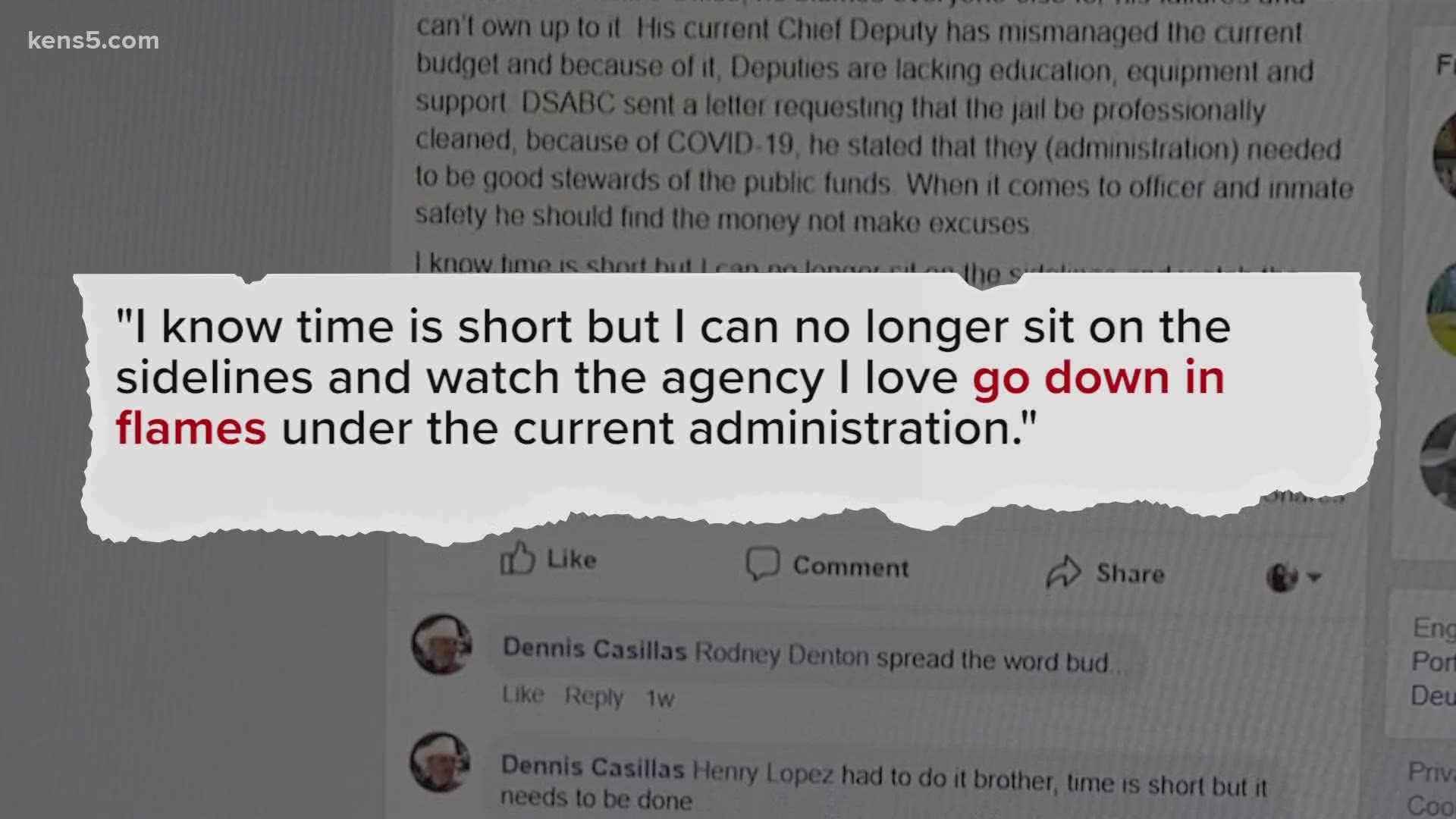 SAN ANTONIO — Up until three months ago, Dennis Casillas was among the Bexar County Sheriff's Office's Command Staff comprised of the agency's top brass. Now, he's running to unseat the sheriff for whom he once worked.

Casillas, who quietly retired in March, broke his silence on Facebook earlier this month, scrutinizing Sheriff Javier Salazar and his administration.

"His total mismanagement of the agency has caused the termination, resignation and retirement of two thirds of his command staff, six out of ten Chiefs," Casillas wrote. "This includes his Chief Deputy, an Assistant Chief and four Deputy Chiefs." Casillas is among the deputy chiefs to retire.

Casillas's lengthy post ended in a call to action, writing, "I know time is short, but I can no longer sit on the sidelines and watch the agency I love go down in flames under the current administration that cares nothing about its biggest assets — its Civilian and Sworn employees. I ask that all my FB family and friends spread the word. It’s time for change at the BCSO. Vote for the write in candidate for BCSO Sheriff, Dennis Casillas."

"Like most sheriffs and chiefs in this in this country right now, my priorities lie elsewhere other than politics. While, yes, that's that's an important part of what we do, right now, we're so focused on policies and reform and, of course, this pandemic that we're in the middle of," Salazar said. "Not to mention our regular occurrences of crime that are going on in the county. We're very concentrated on that. So, I mean, you've got a disgruntled former employee that's got an ax to grind."

"I'm going to let that speak for itself and I won't get too far into it. Just suffice it to say, I'm just gonna keep doing my job the way I've been doing." Salazar said he was unable to comment further on what he meant by Casillas having an ax to grind.

Casillas said although he does not have an ax to grind, "if (the Sheriff) would have been doing his job, there would be no need for an ax to grind."

Casillas, who spent nearly 40 years with the sheriff's office, said he harbors no ill will toward Salazar.

"I just know that he's not the right man for the job," he said.

Salazar is set to face off against republican candidate and former Bexar County Clerk Gerry Rickhoff. Casillas said Rickhoff's background is why he felt it important to take steps toward becoming a write in candidate.

"The man might have been a wonderful county clerk for some, but he has no law enforcement experience whatsoever," Casillas said.

According to the Secretary of State website, Casillas will have to pay a filing fee or get 500 people to sign a nomination petition in order to appear on the November ballot.