DeMar DeRozan, LaMarcus Aldridge, Rudy Gay and Patty Mills made it the first time in Spurs history that four players older than 30 scored 20 or more points. 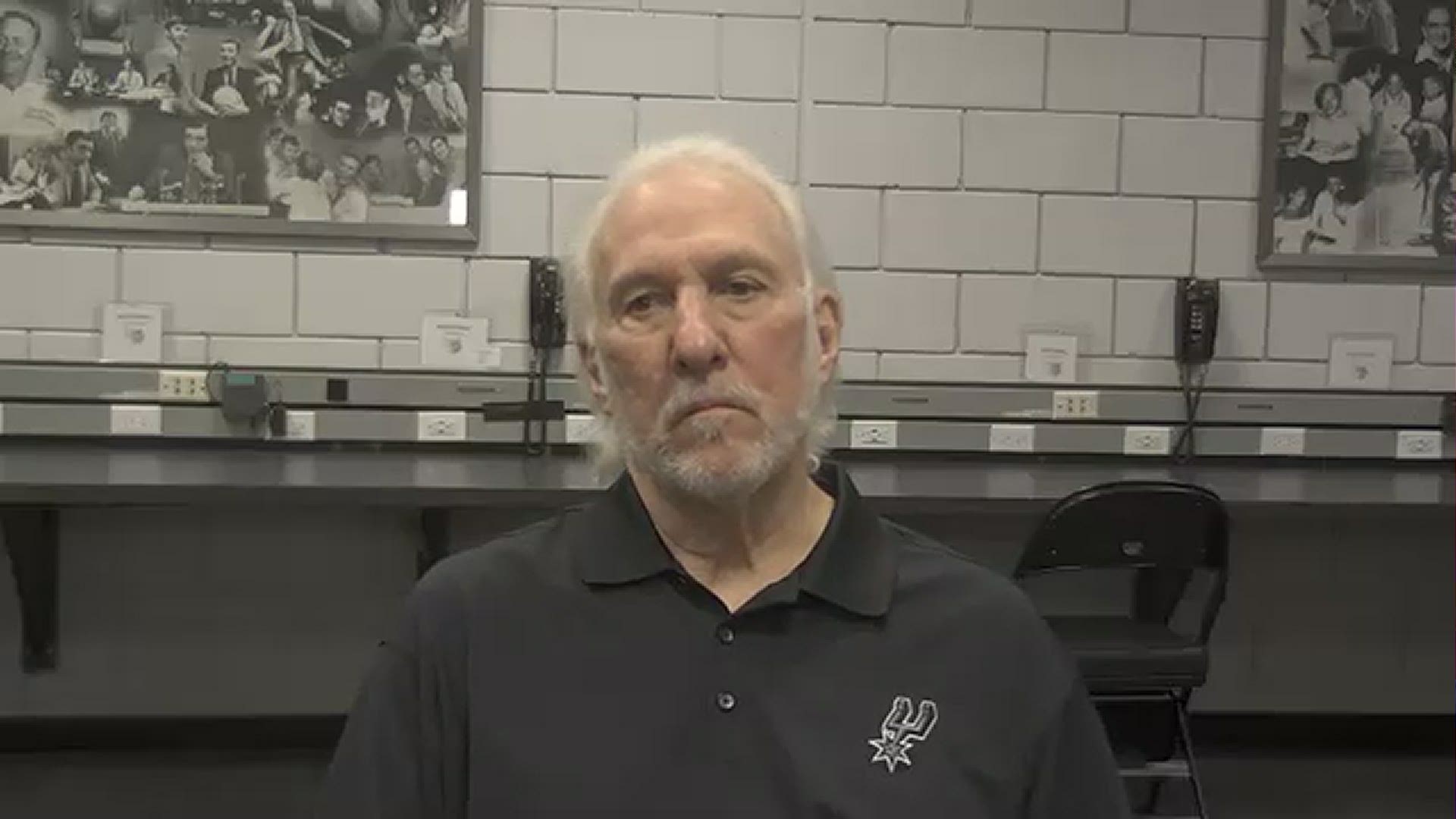 "We had to bring the energy and kind of generate that early," DeRozan said. "We try to go out there and set the tone early older guys, make sure it would be one of those game we take control of and not try to feel our way into the game."

The guys had some funny reactions to being called old postgame, as Mills playfully rejected the label of greybeard.

"Mate, I don't know what you're talking about, but when we talk about young guys we're also talking about us. Might be just a little bit above 30, but we're still considered the young guys, thank you very much."

It started with LaMarcus Aldridge, who the Blazers seemed to not know the scouting report on even though he played his first his first nine years there. Perhaps they were just trying to be good hosts to an old friend. In any case, their pick-and-roll coverage gave him an all-you-can-shoot buffet of open 18-foot jumpers, and the big man ate.

"He basically set the tone early, he got to his spot and he knocked down his shot, it's what we've seen for years upon years," Gay said. "Him knocking down shots, and taking care of pulling out the big men, the game opens up for people like myself and Dejounte to split through the cracks, for DeMar to slip through the cracks." 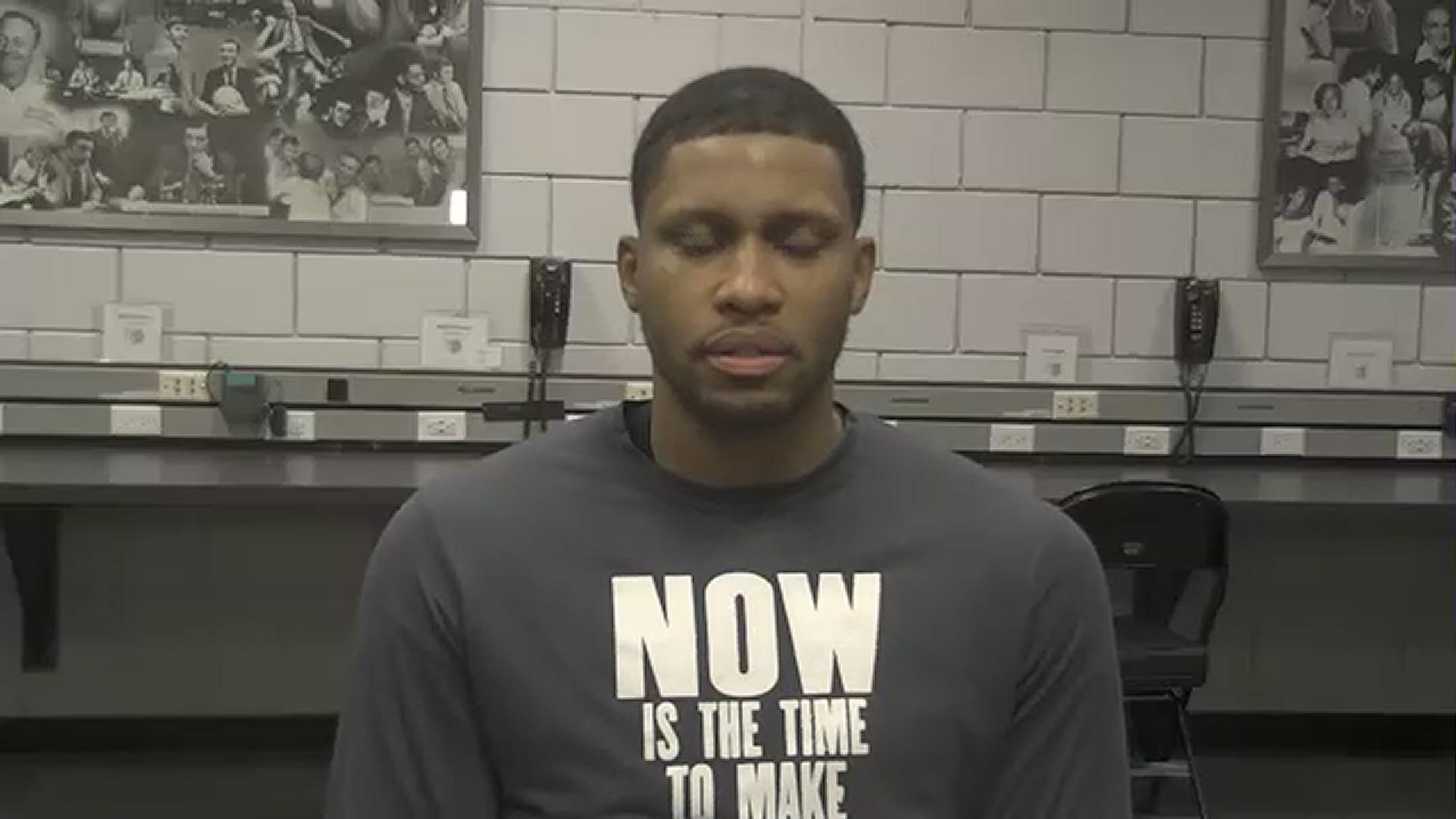 DeMar echoed that, saying that when he hits those shots it forces the defense to make a decision and pick their poison.

"He's made my job easy since the first day I came here," DeRozan said of LaMarcus. "The dynamic scorer he is, especially now being able to stretch the floor, picking and choosing his spots from mid-range, makes my job a lot easier, making me look like I'm a heck of a passer, but it's great having a teammate like that that can take the pressure off you, especially in pick and rolls." 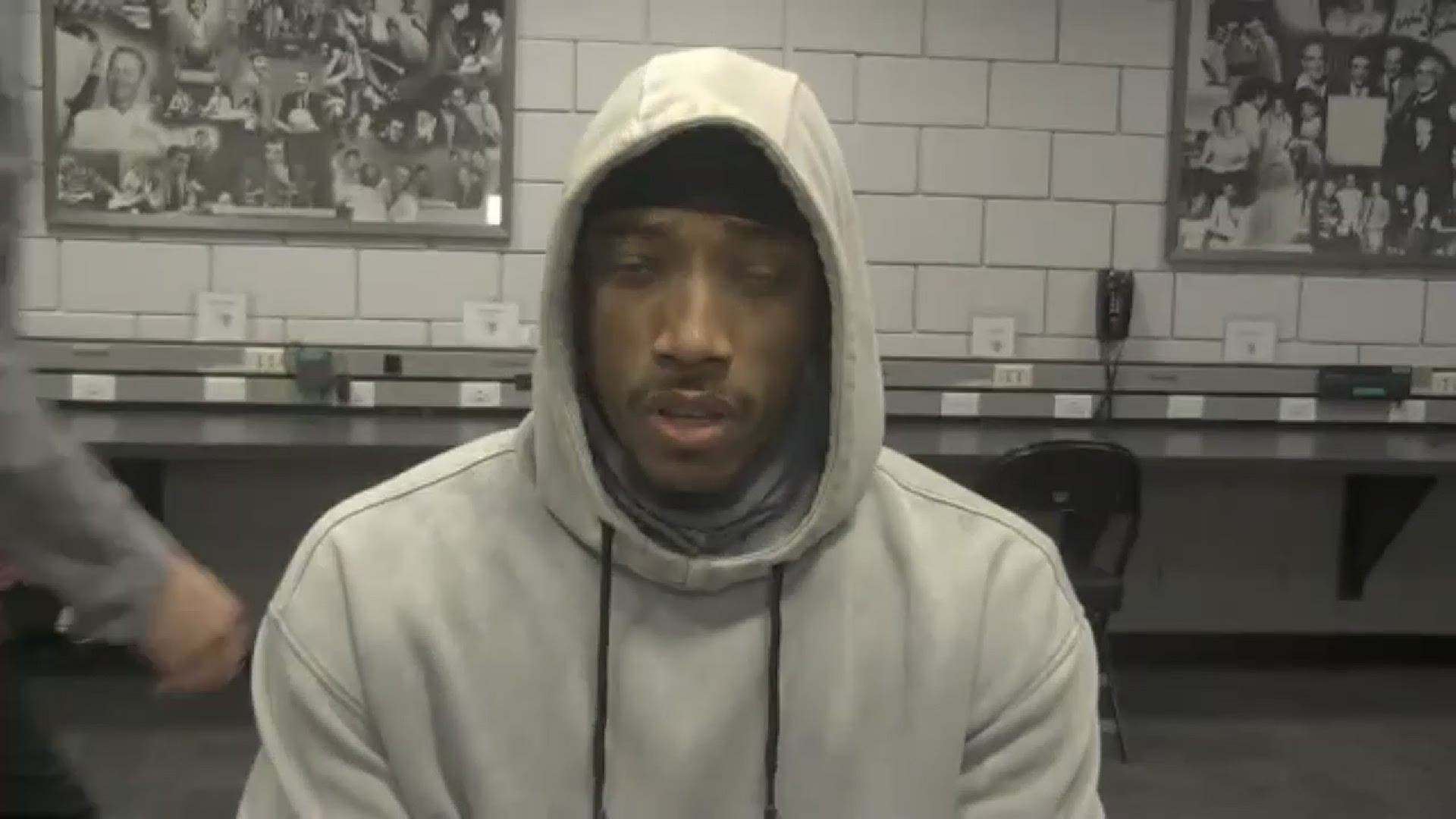 "That's his sweet spot, that's his game right there," said Mills, who was Aldridge's teammate back in the Portland days. "It was good to see him get in a rhythm, and find that sweet spot, and for him to shoot it with comfort. It's funny the way the NBA is going, but I still think there's a lot of money to be made from that shot for him especially, and how the defense guards it." 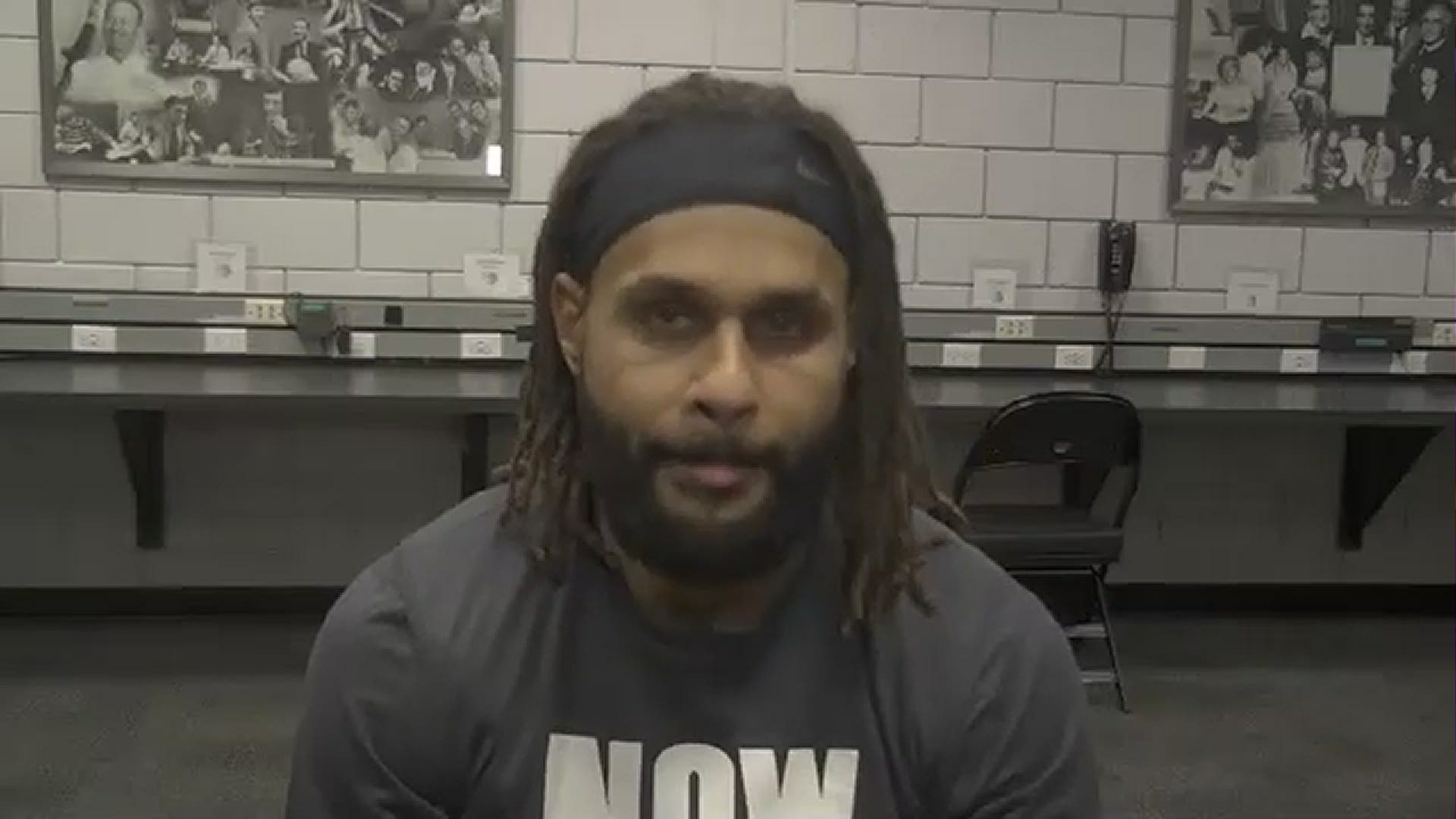 Coach Pop broke down a bit further why Aldridge's mid-range pick-and-pop jumper worked to perfection in this game, saying it was a combination of the defense allowing those shots and Aldridge taking them without hesitation.

"Their big played back in pick and rolls, and he came out aggressively and obviously caught and shot, he didn't catch and think about it or anything like that, he was determined to let it fly," Popovich said after the game.

RELATED: 'The conscience of the country' | Gregg Popovich reflects on the legacy of Dr. Martin Luther King Jr., and what he might think today

"I didn't expect anything less coming from an All Star like LaMarcus," said Mills, who wasn't worried after the big man put up a 4-point game against the Rockets. Popovich noted that Houston's switching and small lineup make it tough for LA, and Mills echoed that.

"Those games against Houston, it's a tough matchup for us and especially for LaMarcus, so I don't think you read into that too much," he said.

DeRozan also feasted in that spread pick and roll that he ran with Aldridge over and over again. He attacked the rim for layups, free throws, and kickouts to open teammates. If he went at half speed, he got to his spot with ease for either a pull-up jumper or an easy assist to Aldridge.

"DeMar is just a great floor player. He scored, he had 11 assists, he just managed things very well," said Popovich, who also noted that his star has his mind on bigger things.  "He showed a lot of courage, and he's still worried every day about the family and his dad, in some respects I guess that's probably the time where his mind can just kinda drift for a bit, and just go compete for a while, and not be as worried as he is, but as soon as the game is over you know what he's thinking about. We feel for him, but he's shown great professionalism, being strong at the same time competing with his teammates."

DeRozan scored 20 points on 9 shots without attempting a three, adding 6 rebounds and 2 steals to go with his 11 dimes. Dejounte Murray joined him with 11 assists, making this the first time two Spurs have done that in the same game since 1996. It goes without saying, but some pretty good players and assist men have played for this squad in the time since.

Murray's 11 was a season-high, and he only turned it over once while shooting 4-9 from the floor and knocking down a three.

As a team, San Antonio assisted on 33 of 48 made baskets and turned it over just 12 times. That's actually a bit over their season average of 10.5, which is best in the NBA by a wide margin over Portland at 11.8. Their assist to turnover ratio of led the league last year at 1.95. This year 2.44 is tops in the league by a goofy amount, and would break an NBA record.

When asked who deserves the credit, Pop stated the obvious.

"Well, the people who are performing and getting those assists of course," he said with a laugh. "It's a big part of the game, assists translate into helping you win basketball games, so, they're unselfish guys and they don't really care who scores, it's just a matter of playing the game the right way."

Gay and Mills each scored 21 points and hit five triples apiece en route to impressive career milestones in that department.

In their lovely symmetrical performances, Rudy reached 1,000 career threes and Patty broke the record for three-pointers off the bench for one team in NBA history, previously held by his longtime teammate Manu Ginobili. The news seemed to surprise Mills.

"I think there's something there in understanding your role and trying to make the most of that opportunity, but at the same time still being true to who you are as a player," Mills said. "I think Manu was the perfect example of that, in how he accepted his role, number one, and then just made the most out of that opportunity by still being who he is. We've heard many stories how he made Pop pull his hair out and stuff like that because of his flair that he plays with, but that's his identity on the court. That's the same for me, and for whatever reason this year I've come to understand that, with the perspective from the bubble like I've mentioned, and what I learned there, and to be able to implement it this season."

Popovich's praise of Mills isn't difficult to find, but he was rather succinct this evening.

"It says that he's a hell of a shooter"

Gay said numbers like that don't mean much to him and he doesn't think about them, but then he did, and he realized that when he came into the league three-point shooting wasn't emphasized nearly as much as it is now, so it actually does mean something.

"Gotta go home with a heater," Gay said of his 14-point fourth. "I was able to knock down some shots, it just happens like that. You see one go in, the rim looks like it's a swimming pool at times."

The whole team and especially the vets dove in, as San Antonio shot 53% from the floor and 15-33 from deep. According to Mills, the threes were almost a happy afterthought.

"I think tonight was one of those examples of sticking with the gameplan that didn't really focus on those shots," he said. "We were doing a whole lot of other things greater, especially on the defensive end and how we were guarding them, especially Lillard."

It might seem strange to praise the defense on a guy who scored 35, but Dame does that. They held him to 10-23 from the field and 3-10 from deep, and he had 6 assists to 5 turnovers. Popovich was also enthused by the team defense, especially on Portland's shot-making star.

"I think that was the best part of our game, weakside defense was very active on Damian Lillard, who showed great aggressiveness, and we finished with boards, there's no stop unless you get the board, and I thought we did a good job of that as the game continued," Pop said.

The two centers didn't have a rebound between them at the break, but the other players came in for them and Jakob Poeltl grabbed 6 on offense in the second half to give San Antonio extra chances they cashed in on. Lonnie Walker IV, Keldon Johnson and Devin Vassell made excellent defensive impact as the vets controlled the scoring. Nobody played a bad game, and it showed in both process and result.

All those little effort plays on both ends add up to a tangible but immeasurable mojo that this team plays with, and they flirted with it throughout today's game and harnessed the full potential of its power down the stretch.

Now at 8-6 on the season with wins over both teams in Los Angeles and some other competitive teams, San Antonio has a lot to build on. More important than their opponents, they're shooting well, sharing the rock, cherishing each possession, locking in on defense and continuing to grow. They're still waiting for Derrick White to come back too, and he was arguably their best player in the bubble last year.

DeRozan said that the team is happy with where they're at given all of the challenges of the year, but they feel there are a few games they should have won, and they have room to get better. Popovich is happy with the start to the season, and it's clear the Spurs are moving in the right direction.

"I think the guys have played well, some injuries here and there, a very difficult schedule to start with, they've hung in there and we've seen a little bit of everything, and they've come through it very well."

-All four vets over 20
-The DeMar/LA connection
-Movement, shooting, defense

Let’s talk about an all-around lovely game on a live @bigfunpod postgame https://t.co/tuvmLnFbUs