'History is history. You can't change it': Why 'Come and Take It' motto endures in Town of Gonzales

"Anybody who knows their history knows the real history of what that flag represents," one Gonzales resident said. 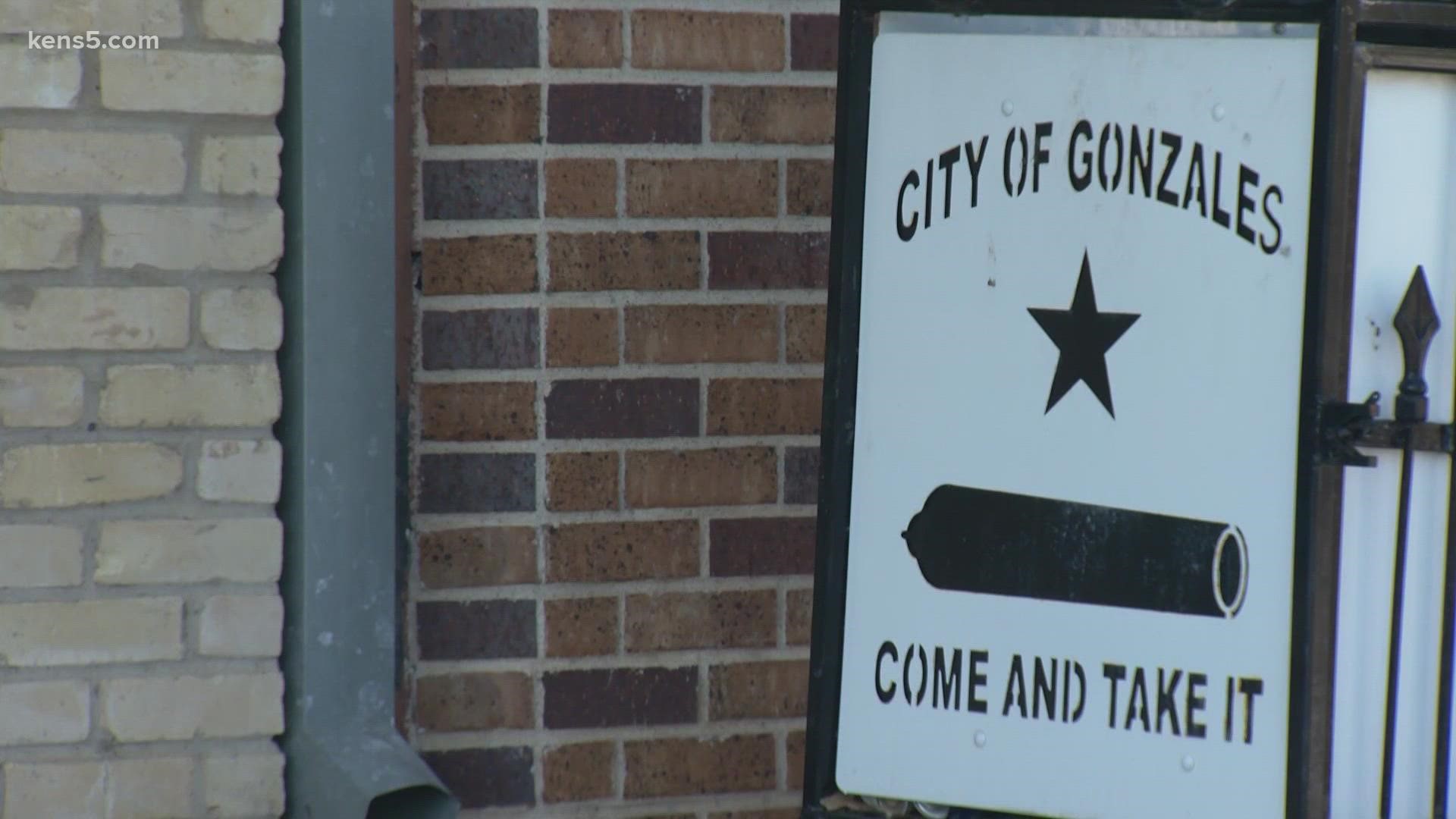 GONZALES, Texas — As the University of Texas at San Antonio prepares to take down its "Come and Take It" flags, the historic motto remains displayed proudly all across the Town of Gonzales.

"This is the foundation of Texas. We set it off for Texas, and that's why they call us the 'Cradle of Independence,'" said Thomas Enriquez, standing near a trash can bearing an image of the iconic "Come and Take It" flag.

The lifelong Gonzales resident is running for city council. He marched door-to-door Wednesday, asking town square business owners if he could display a campaign flier in their windows.

His ads, printed on copier paper, display the "Come and Take It" flag on the banner.

"Without those brave people who stood up and said, 'Hey, we're not going to take it. You want that cannon? Come and take it,' there would be no Texas right now," he said.

Settlers refused, and told the military to "come and take it." This was among the first steps Texas settlers took toward independence from General Antonio López de Santa Anna's reign.

"I think about the Tejanos," said Enriquez, who is Hispanic. "Those people rose up against tyranny and fought."

"There is no racism when it comes to the 'Come and Take It' flag," he continued. "Anybody who know their history knows the real history of what that flag represents."

Some academics disagree. A UTSA professor recently started an online petition to strip the motto from school branding.

"This is a slogan that embodies both anti-Mexican and pro-slavery sentiment," Ellen Clark wrote. "It has carried those white supremacist beliefs from 1835 to today, and in that time has also been widely adopted by anti-government, pro-gun extremists, such as at the January 6th insurrection at the US Capital."

Other historians note that, though he refused to accept freed slaves as refugees, Santa Anna outlawed slavery in Mexico. When Texas gained its independence, the territory's slave population ballooned.

Some argue the phrase is not welcoming, or that it reflects Texan arrogance.

Still, the flag waves proudly in the Gonzales breeze. The town's sewage caps even bear its image.

"History is history. You can't change it," said Besard Gegaj, manager of the Come and Take It Bar and Grill in Gonzales. "It's either you like it or you don't like it. But it's history."

Gegaj's family owns the bar on the square. Inside the old building, the flag dangles above the countertops.

"I couldn't believe the 'Come and Take It' Bar and Grill (name) wasn't taken," he said.

Gegaj, who immigrated to the U.S. from Albania to help his family open the restaurant, says he's never felt unwelcome in the town or intimidated by the flag.

But context is key, he says.

A number of political groups and corporations have co-opted the phrase for their purposes. The motto has become a rallying cry for pro-gun advocates, as well as advocates for abortion access.

This is why the flag must be retired on campus, UTSA President Taylor Eighmy says.

"Over the last decade, the phrase has become increasingly affiliated with cultural and political issues beyond its traditional historical context,” Eighmy wrote in an email to faculty. “A simple online search of webpages, articles and images involving this phrase reveals the myriad of ways numerous organizations have adopted it for their particular cause."

"Many of these organizations have values and agendas that differ significantly from ours and our clear focus on excellence in intercollegiate athletics and higher education," he continued.

The "Come and Take It" motto flew on Confederate flags outside the U.S. Capitol during the insurrection on Jan. 6, for example.

The university will no longer help students unfurl the flag at the start of the fourth quarter of home football games. It will also remove signage making reference to the motto on campus.

But the references in Gonzales – where the motto is painted onto brick walls, sidewalks and the town water tower – are more permanent. And residents say they don't expect the town to retire the phrase.