Canyon Lake Water Service Company has been struggling to cope with the ice storm, which included power losses, frozen pipes, and even an alleged act of vandalism. 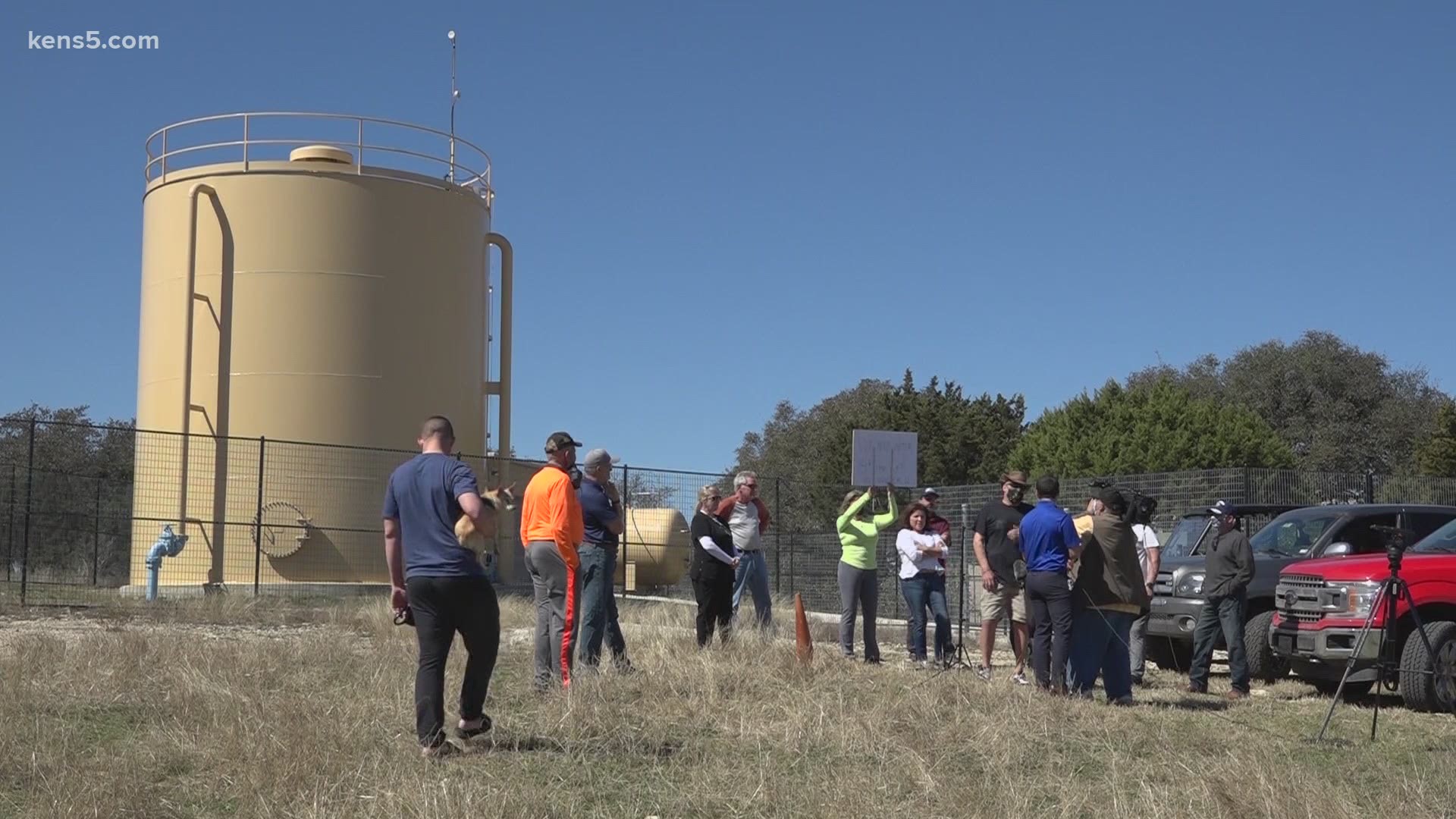 CANYON LAKE, Texas — UPDATE: On Thursday, the Canyon Lake Water Service lifted the Boil Water Notice for all of their customers.

"Lab tests have confirmed that the water in remaining systems, which were under the boil water advisory, have water that meets all state and federal drinking water standards and can be consumed without boiling," they said in a release.

People who live in the Lantana Ridge subdivision west of Highway 281 in the Spring Branch area are hoping they will be able to turn on their taps soon. They say they have been living without water for nine days.

Their water supplier, Canyon Lake Water Service Company, has been struggling to cope with the ice storm, which included power losses, frozen pipes, and even what they call an act of vandalism.

Neighbors ready to have service restored aren’t just boiling water. They say they are boiling mad.

“It's been a nightmare! We have nothing! They are not giving any information or they are giving conflicting information so it's just not consistent,” Kim Spenrath said.

Medrano says the lack of information is nothing but frustration.

“They said, 'Boil the water,' but we don't have water! For nine days there’s been no shower, and we haven't cleaned the dishes right,” Medrano continued.

Christy Ewings called the lack of transparency completely unacceptable in a neighborhood that includes more than 350 homes.

Ewings says “This is ridiculous! There have been no pallets of water delivered and we had melted ice and people have been sharing stuff but that's all gone now, so now what?”

Carolina Jordan, who has two small children, says “Our kids do not understand what is going on and unfortunately I don't have family in the state so I can't just pick up and go.”

Her husband, Jeff Jordan, says he is severely disturbed.

“We are at the mercy of one entity and it is not working in our favor right now and why should we have to leave our home in this day and age?” Jordan says.

In addition to the lack of water, there is an additional problem with possible arsenic contamination.

Bob Kissinger, who lives one neighborhood to the north, said, “Somebody went into the abandoned (water) plant and reactivated it, and put the contaminated water into our system.”

The water company admits someone tampered with the supply station, which had been taken offline in 2018 because it showed elevated, but not failing levels of arsenic in regular testing. A company spokesman says the water did meet legal drinking water standards, but the location was removed from service as a precaution.

Kissinger said, “The breaks from the cold are being repaired but this arsenic contamination is completely separate!”

He says he and his wife both showered and had their morning coffee right before they learned of the breach in the system.

“Arsenic contamination is worrying a lot in the community. We truly don't know what is going on with the level of contamination,” Kissinger says.

While neighbors gathered to voice their fears, work crews from the water company were visible throughout the area, and water was gushing from several points as workers hurried to bring water back to the area and flush the lines.

Company spokesman Dan Meaney provided the following statement about the vandalism and additional history on the company’s response:

“The vandalism that involved the unauthorized activation of a well that been offline since 2018 complicated and delayed the restoration of water service to the neighborhood. Since we were uncertain of the quality of the water put into the distribution system by that action, it required flushing of the entire neighborhood and additional water quality testing as precautions to protect public health and the water system.”

Statement from the Canyon Lake Water Service Company (CLWSC) on the vandalism that lead to a Do Not Drink order affecting 570 customers in Riverwood Estates, Cypress Springs on the Guadalupe, Lantana Ridge, and Woods of Spring Branch.

The CLWSC serves 20,000 customers in Blanco, Comal, Hays, and Travis counties. The employees of CLWSC have been working tirelessly to quickly and safely restore water service to customers across the region. We appreciate the patience and understanding of customers who have endured extreme weather related hardships over the past week.

On Friday, February 19, the Canyon Lake Water Service Company issued a Do Not Drink order for 570 customers in the Riverwood Estates, Cypress Springs on the Guadalupe, Lantana Ridge, and Woods of Spring Branch. CLWSC took this action out an abundance of caution following a vandalism incident at one of its facilities on February 17. Customers in other subdivisions served by CLWSC were not affected by this incident.

The incident involved someone activating a company well that had been offline since 2018. In 2018, routine water quality sampling showed that the level of arsenic in the water produced by that well was 9.7 parts per billion (ppb), which is just under the U.S. EPA’s maximum allowed level of arsenic of 10 ppb. At no time did the water quality tests show that the well did not meet state and federal drinking standards, however it was taken offline out of an abundance of caution. Since then, the neighborhoods have been supplied with water from other water sources.

The level of arsenic detected in the well has been publicly available for the last few years in the Consumer Confidence Report issued by the company annually and posted to the website: https://www.sjwtx.com/sites/default/files/2020-06/Canyon%20Lake%20Shores.pdf

The well had not been used by the Company until the incident on February 19, 2021 when it was reactivated by an unauthorized person. As soon as CLWSC employees discovered the well had been activated, it was again taken offline.

What Customers Need to Know

Because CLWSC cannot be sure what the level of arsenic was in the well at the time it was reactivated by the unauthorized individual, the Company issued a Do Not Drink order until samples could be collected and tested at a lab to confirm that the water meets drinking water standards.

Customers will be notified by CLWSC when lab tests have confirmed that arsenic is not an issue in the water system, and updates will be posted to our website at sjwtx.com.

The perpetrator of the vandalism on the well has been identified and the matter has been referred to local law enforcement and the Department of Homeland Security. The Texas Commission on Environmental Quality has also been notified. Tampering with a public water system is considered a felony and the matter is now in the hands of law enforcement officials. CLWSC’s focus is on doing everything necessary to deliver a safe supply of water to customers affected by the vandalism.

Kissinger says even when service is restored, it will be a while before confidence is restored to the company’s reputation.

“I'm frustrated more than anything because it was certainly an unusual circumstance to begin with, so we had our challenges but I think the breakdown in communication is what drove my frustration and my neighbor's frustration as well.”

Meaney says as they get beyond the immediate crisis response, he is certain the company will look at actions they can take to improve their communications plan.

In the meantime, there is no word yet on what possible consequences the person who tampered with the system will face.

As of 9 p.m. Monday water service has been restored by the company, but the Do Not Drink notice is still in effect for customers in the Riverwood Estates, Cypress Springs on the Guadalupe, Lantana Ridge, and Woods of Spring Branch. Everywhere else they serve is under a Boil Water Notice.