Corion Holmes, the youngest son of former NFL All-Pro running back Priest Holmes, has helped the Broncos reach the third round of the playoffs. 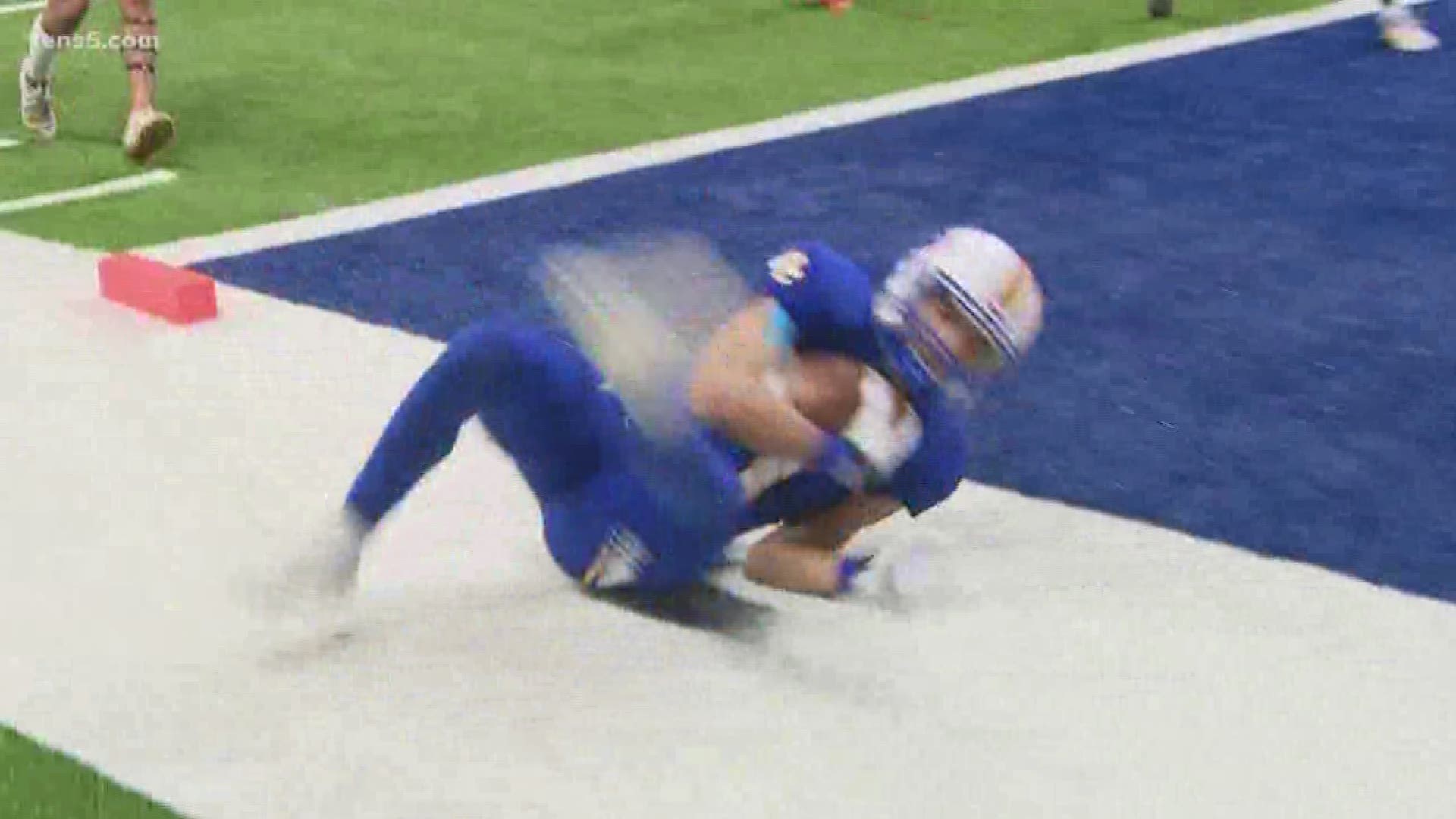 SAN ANTONIO — After playing on the Antonian varsity football team for three years, Brandeis senior running back Corion Holmes has packed a bountiful supply of highlight plays into his only season with the unbeaten Broncos.

"It's been great to be a part of this team," Holmes said. "We have a lot of good players who are great teammates, too."

Holmes, who transferred to Brandeis in March after spring break, has rushed for 767 yards and 12 touchdowns on 98 carries for an average of 7.77 yards per tote.

"This school's a lot bigger than Antonian," Holmes said. "I had to adjust, like walking across the whole campus, to get to my classes. The guys on the team took me in and I got into it pretty quickly. I love them."

Holmes is the youngest son of former NFL All-Pro running back Priest Holmes, who graduated from Marshall High School in 1992 and continued his football career at Texas.

Corion will be in the starting lineup when Brandeis (12-0) plays Edinburg Vela (9-3) in the Class 6A Division II regional semifinals at 2 p.m. Friday at the Student Activity Center in Laredo.

Brandeis coach David Branscom described Corion as a "phenomenal" running back who has played an integral role in the Broncos' success this season.

"He brings a lead-by-example mentality," Branscom said. "He's kind of reserved. It takes a while to get to know him. But what he proved over a short amount of time is that he was going to do everything right, he was going to be where he's supposed to be. He was going to work hit butt off.

"You don't have to be that vocal rah-rah guy to lead, and he proves that every day because he sets a standard for so many guys, especially our senior class. The addition of having him has been awesome."

Credit: Photo by Antonio Morano bit.ly/XR79FT / Special to KENS5.com
Brandeis senior running back Corion Holmes celebrates with assistant coach Aaron Grubb after scoring one of his three touchdowns in the Broncos' 35-21 win over Clemens in a Class 6A second-round playoff game last Friday.

A Brandeis victory Friday would put the Broncos in the state quarterfinals for the second consecutive year and the fifth time since the school opened in 2008.

The Brandeis-Vela winner meets the Austin Westlake-Weslaco East survivor in the Region IV final next week. Westlake beat Brandeis 26-0 for the regional title in the state quarterfinals last year.

"We've just got to stay humble and focused," Corion said. "You can't make a lot of mistakes. We have to go out there and execute."

Priest Holmes has lived in San Antonio since he ended his 10-year pro career in November 2007. He has attended every Brandeis game this season and has spent at least two nights a week watching game and practice films with his son.

"It's amazing just having him to be able to watch film with me," Corion said. "I go home, watch film and he just tells me what I can do better and what I've done wrong.

"We watch film of the team we're playing. He tells me about the (defensive) fronts and how to look at it and how to evaluate it. It's amazing, the things that he sees. It really helps me."

While Priest Holmes starred in the NFL, Corion said his father never pushed him to play football.

"It's really my decision," Corion said. "I just love football. I've been playing since I was 4. I got injured a few times and my dad always said, 'If you don't want to keep on playing, you don't have to.' But I always said, 'I want to. I've got to do my rehab and get back on the field."

When Priest Holmes ran football camps for 20 years with his longtime trainer, Bay-Bay McClinton, Corion usually tagged along with his father and two brothers.

"I would say as football goes, the qualities they definitely each have are a piece of me," Priest said, talking about his three sons.."But the one thing I noticed, for the most part, is that Corion just has an incredible work ethic.

"He has kind of that stoic look on his face. You never know what he's thinking.  But he's determined, plays with a lot of determination. When we were doing our camps, guess who would be in the background mimicking everything that we were doing? It would be Corion."

Credit: Photo by Antonio Morano bit.ly/XR79FT / Special to KENS5.com
Brandeis senior running back Corion Holmes, taking a handoff from quarterback Jordan Battles, scored three touchdowns in the Broncos' 35-21 win over Clemens last Friday in the second round of the Class 6A Division II playoffs.

Corion, 17, was only 5 when his father retired 12 years ago and has no recollection of watching him play. But Corion remembers the summer camps.

"He was too young to participate in the camps," Priest said. "His older brothers were in the camps. And even though Corion couldn't participate, he was still on the sideline at a very young age trying to do everything they were doing. He was always around football."

Priest said he's enjoyed helping his son learn more about football through film study. He recalled how veteran NFL running back Earnest Byner taught him how important that aspect of game preparation can be throughout a season.

"I definitely get excited when I'm watching the game," Priest said. "I get excited when he scores touchdowns. Like I've done with all of my boys, we've always watched film leading up to the game.

"While he (Corion) is on the field, I'm looking at him thinking, we've watched this play, or this is the move you need to make. I'm always critiquing him on that level, in terms of what he should be doing when he's on the field."

Credit: Photo by Antonio Morano bit.ly/XR79FT / Special to KENS5.com
Brandeis senior running back Corion Holmes is the youngest son of former NFL All-Pro running back Priest Holmes, who helped lead Marshall to the 1991 Class 5A Division II state final before going on to a four-year at Texas.

As a former athlete, Priest said he can relate to what Corion goes through during a game.

"I understand the sacrifice that it takes," Priest said. "There's always a great sacrifice to play this game of football. It takes a tough mentality to play through injuries.

"It's a brutal sport, and when your body doesn't want to do it when you get up in the morning, you have to condition yourself to just get up regardless."

At 5-foot-9, Corion is the same height as his father when he was a senior at Marshall. But Corion, who weighs 185  pounds, is a little heavier than Priest (175) was during the Rams' march to the 5A Division II state final.

Priest rushed for 2,061 yards and 26 touchdowns as a senior at Marshall. While Corion will fall way short of his father's stats, he still has a chance to win a state championship.

"That's our goal," Corion said. "That's why we've worked so hard since the offseason."