Footage shows Donald Neely being handcuffed, tied to a rope and walked down the street. 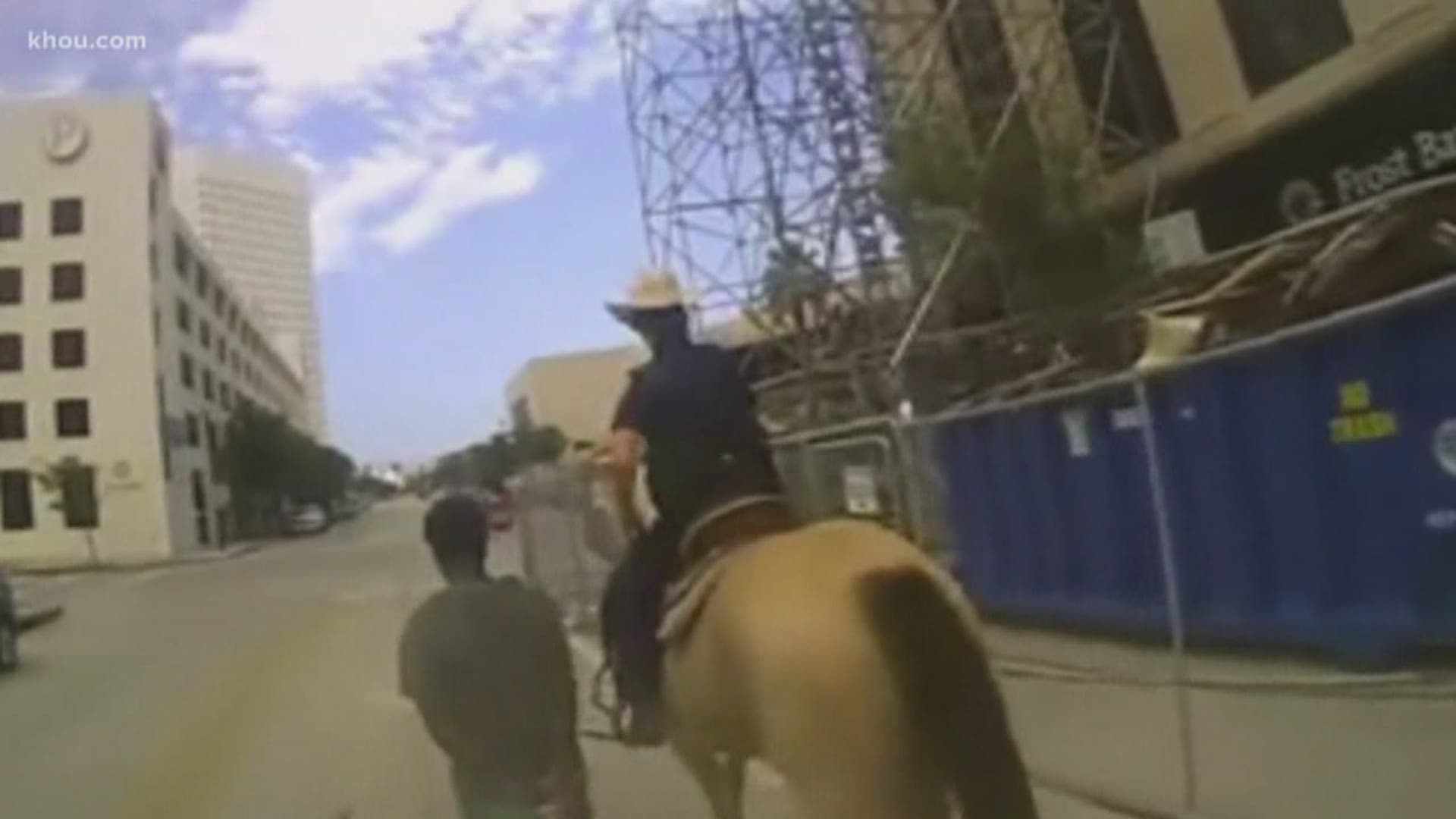 GALVESTON, Texas — Body cam footage from two mounted Galveston police officers released Wednesday shows the controversial arrest of Donald Neely as he is handcuffed, tied to a rope and walked down the street.

The Aug. 3 arrest of Neely, 43, garnered attention and sparked outrage across the county. The officers had arrested him on a charge of criminal trespassing, though Taranette Neely, his sister, said her brother is homeless and mentally ill. 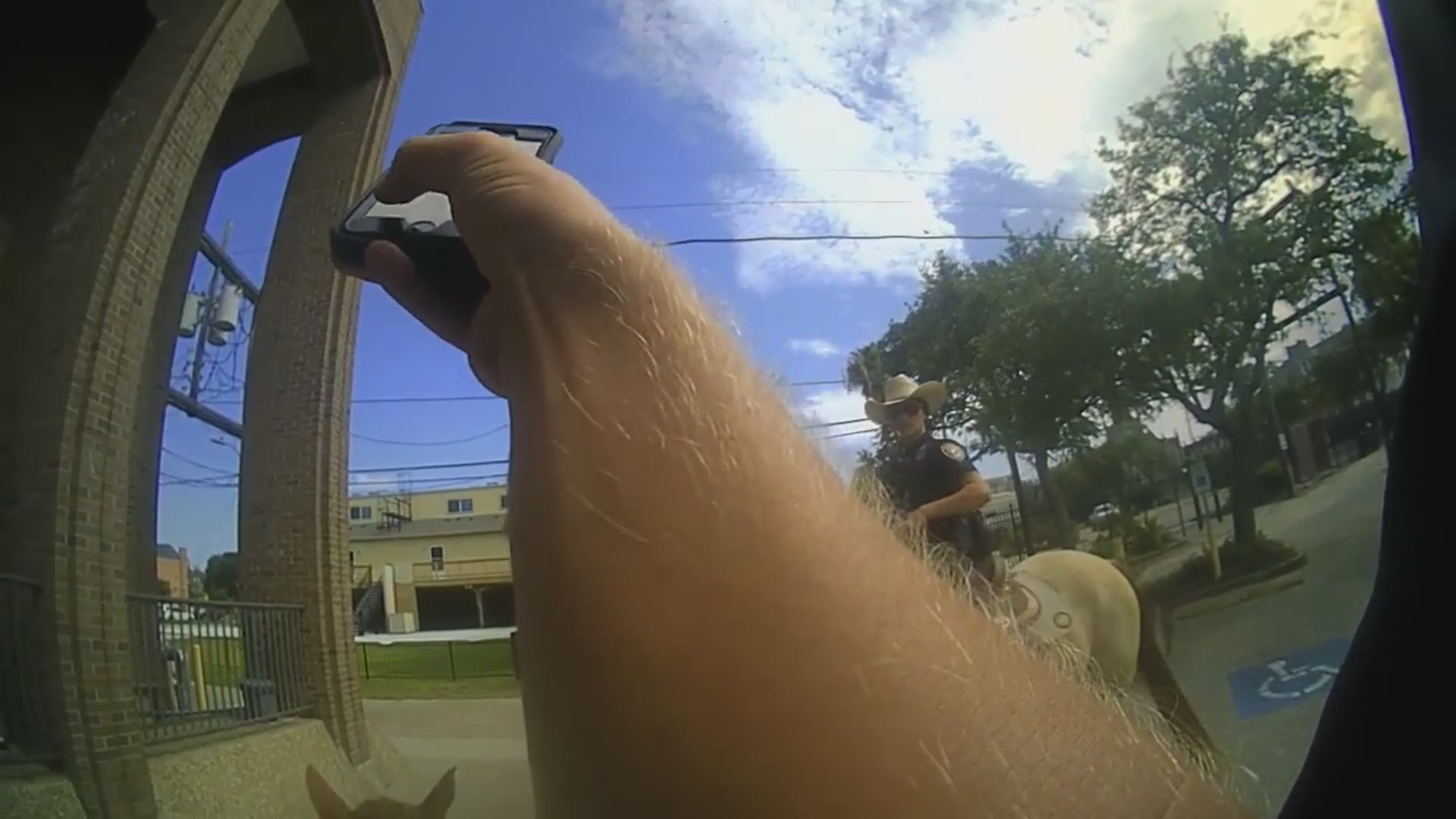 "He's been suffering from depression for a long, long time," she said.

The City of Galveston asked the Texas Attorney General to prevent the release of the officers’ body camera video. The city waited to release it until the completion of an outside investigation.

However, the attorney representing Neely on that criminal trespassing charge said in August that he believed the law allows for the footage to be released. The release comes weeks after marchers last demanded it.

The footage released Wednesday, the officer wearing the body cam is heard trying to convince his partner to take the horse back and come back with a vehicle.

"This is going to look bad," the officer is heard saying.

“We have not held back any part of that video,” said Galveston City Manager Brian Maxwell. “It’s there start to finish for everyone to draw their own conclusions.”

Trespassing suspect Neely’s arrest, from the time he’s questioned outside a commercial building to his being led by a rope through the downtown area, is all documented.

“I want less eyesight,” said one officer as they discuss a route. “This is going to look so bad.”

Neely, who struggles with homelessness and mental illness, wears his welding hood at one point in the video.

Officers can be heard warning Neely to stay close.

“Stay next to me or I’m going to drag you,” one officer said.

Witness footage of the arrest back in early August sparked widespread criticism for the way the arrest was handled.

It was followed by community meetings and the recent march.

“It’s never a good situation when these things occur,” Maxwell said. “The best we can do is be honest and up front and release everything and trust in the system that it’s going to get handles appropriately.”

Police Chief Vernon Hale has the sole discretion regarding any disciplinary action based on the sheriff’s office report. But there’s no time frame on how soon that might happen.

“And we stand by and support whatever decision the chief makes,” Maxwell said.

At a community meeting soon after the arrest, Hale apologized "for this unnecessary embarrassment" and said the officers showed poor judgment. He said "this technique of transportation during arrests" was immediately suspended.

However, after requesting a copy of the mounted patrol policy, KHOU 11 learned there is no policy on the books. A city spokeswoman said the policy was still being drafted because the mounted patrol was recently expanded. She said the Galveston mounted police officers involved in Neely’s controversial arrest learned that rope technique during 40 hours of training.

Hale said two independent reviews of the arrest were conducted by the Texas Rangers and the Galveston County Sheriff’s Office. The Texas Rangers completed their review on Aug. 16, Hale said, and found the officers had not violated the law.

On Wednesday, Galveston city officials said the administrative review from the Galveston County Sheriff’s Office has been completed and that the Galveston Police Chief will review the report, and decide what action "is appropriate and consistent with the civil service rules under which the Department operates."

Right now, the two officers involved in the arrest are on modified duty. The mounted patrol, which was a pilot program, is not currently in use.

Full statement from City of Galveston on Aug. 3 arrest of Donald Neely

The City of Galveston promised to release the body camera videos worn by Officer Brosch and Officer Smith to the public immediately after we received the administrative review from the Galveston County Sheriff’s Department.

These videos are being released in their entirety; however, there is no audio during the first two minutes of the body camera videos as a result of the configuration of the body camera equipment. Once an officer activates the camera, the previous two minutes are captured on video. The camera is not constantly recording and storing audio due to storage limitations.

“Galveston voters elected to have Civil Service rules for their public safety officers. Due to Civil Service rules, any discipline would be at the sole discretion of Chief Hale. The City supports the chief in any actions he deems to be appropriate; however, if the investigation identifies deficiencies in department policies or practices those will be addressed directly with the Chief,” said City Manager Brian Maxwell.

“I appreciate the efforts of Sheriff Henry Trochesset and thank the Galveston County Sheriff’s Office for taking the time to perform a thorough, independent review of the arrest. I am studying the report now and will use its findings to make decisions in the near future about the next steps for the department,” Hale said.