With smuggling a continuing issue for Border Patrol agents, the impact is now reaching beyond border town...and to metros like San Antonio. 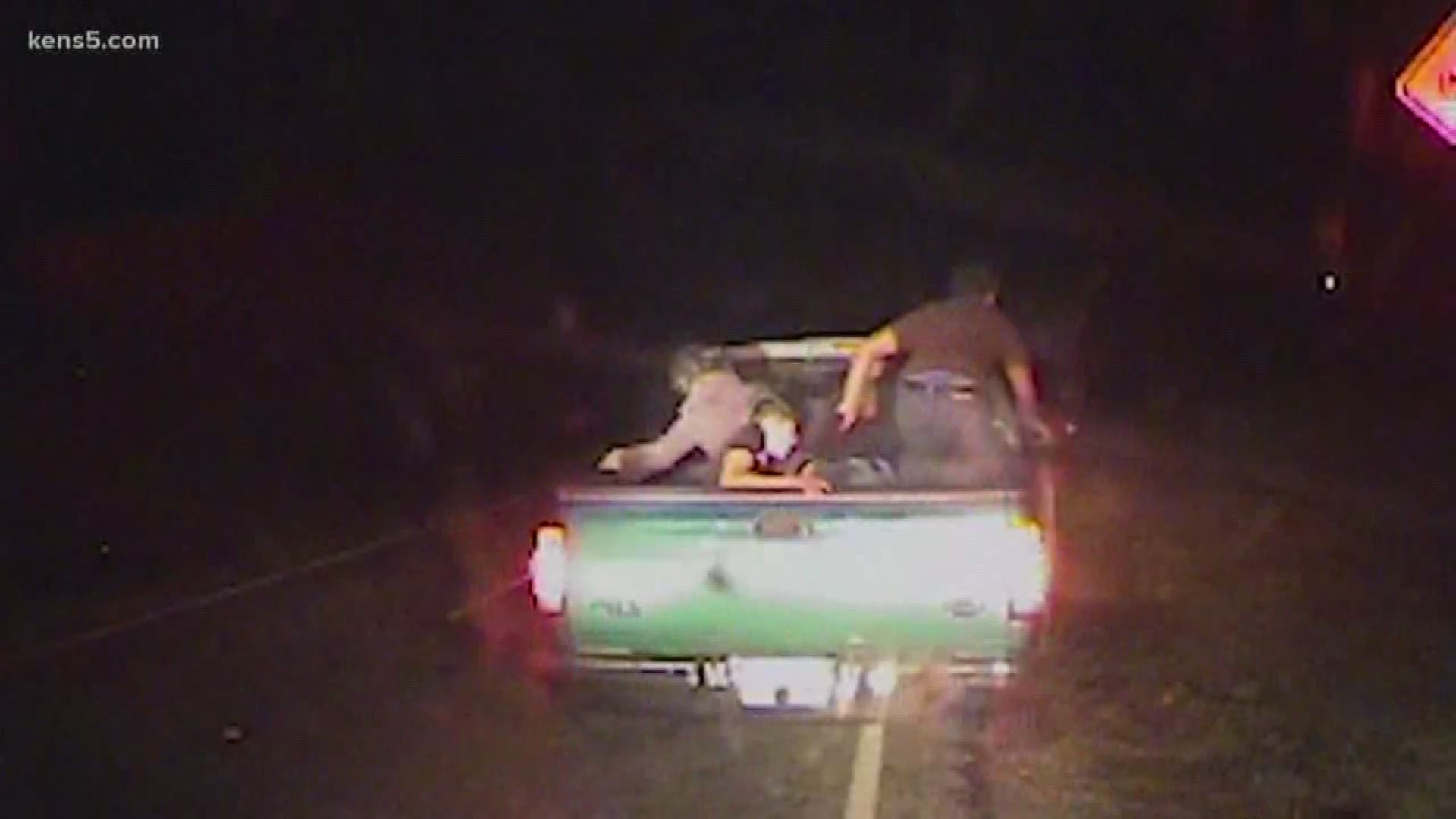 BRACKETTVILLE, Texas — Patrolling on a late night by herself, Kinney County Deputy Mendez tried to make a traffic stop off Ranch Road 674 outside of Brackettville.

When she stopped the Ford truck, she approached the vehicle.

“I got my flashlight and looked into the bed of the truck and saw bodies,” Mendez said.

Mendez’s handheld radio was broken, so she had to return to her patrol car to call for backup.

“By the time I looked up, they started bailing,” she said.

Dash camera video captured the moment the migrants jumped out of the truck and ran into nearby brush.

Mendez is just one of four deputies covering the 200-plus square miles of Kinney County, and trying to put an end to the rise in human smuggling.

Border Patrol officials said there have been at least 700 cases of human smuggling across the Del Rio Sector since the beginning of the year.

“We’ve got to be alert for every little minor detail, and alert to your surroundings,” Mendez said.  “You just never know when that traffic stop might go wrong.”

On Sept. 13, Mendez was assisting Border Patrol agents with a traffic stop off the same road when the passenger of the vehicle pulled out a gun and shot one of the agents.

Another agent fired back, killing the shooter.

The agent who was shot survived. Officials said it was not only their bulletproof vest that saved his life, but also the quick thinking and training of him and other agents.

“People may say, 'Well, it's very innocent. You know, folks trying to look for a better way of life.' But it's got a direct nexus to, I think, some very violent tendencies,” said Raul Ortiz, Border Patrol chief agent of the Del Rio Sector. “It’s quite often that we will have four to five cases in a single day."

The violence is stretching beyond this small border county.

“Quite a few of the smuggling events that we've seen recently have a direct link to San Antonio and Austin,” Ortiz said.

Most of the drivers are from the larger cities, and the smuggling rings are now recruiting teenagers from cities like San Antonio.

“We've seen a spike, especially with the school year starting, that individuals between the ages of 16 and 18 are being recruited at high schools and other locations, and we're going to combat that,” Ortiz said.

Jessy Haas, a deputy patrol agent in charge of the Brackettville Station, said the criminal organizations are recruiting teenagers because it’s harder to prosecute juveniles on the federal level.

However, Haas said, Border Patrol is working with the Kinney County Sheriff’s Office to prosecute the juveniles on different charges.

Haas said smugglers are enticing teens with the allure of money.

It's an offer that's causing the smugglers, at any age, to seek desperate measures to finish the job.

“You need to be aware that these people have no regard for your safety,” Haas said.

Haas said smugglers are leading authorities on high-speed chases down the narrow country roads in Kinney County, with speeds often reaching close to 100 miles per hour.

Last week, a high speed chase with suspected smugglers starting in Kinney County and ended near Kerrville. The driver, a 17-year-old girl, was accused of smuggling five people.

“Their sole purpose is to get away and outrun law enforcement, because that's what they're being told,” Haas said.

Border Patrol is working with the Kinney County Sheriff’s Office by stepping up patrols and adding more checkpoints.

“We’re going to keep the pressure on as long as we possibly can,” Ortiz said.