El Bucanero was a nameless dream for Julio Cervantes when he came to the United States. Four years and two locations later, the family-owned seafood business found a recipe for success. 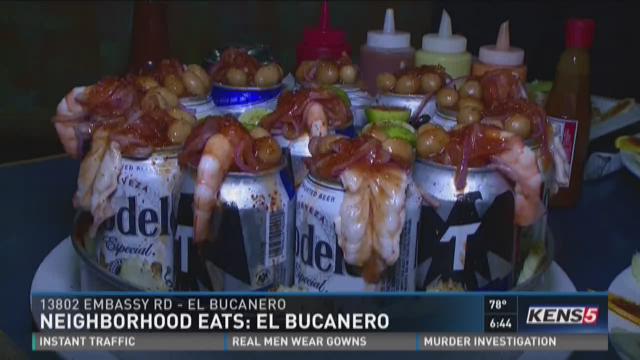 El Bucanero was a nameless dream for Julio Cervantes when he came to the United States. Four years and two locations later, the family-owned seafood business found a recipe for success.

"Imagine coming from let's just say Mexico," says Elizabeth Cervantes. "Coming into the United States and you're wanting a taste of home."

Elizabeth is the restaurants' general manager and daughter-in-law to Cervantes. She, her husband, mother Myrna, Aunt Renya Castro and a host of other family run the place. They opened their first location at 16505 Blanco Rd on April 13, 2012. It was Friday the 13th. But the day was far from unlucky.

"Fast forward. We opened Bucanero Embassy in 2014," she says.

Both locations can get extremely packed. In fact, the wait can push past an hour as patrons line up for fresh Mexican seafood dishes. Their roots to Mexico's coast turned the family into experts. No one, according to Elizabeth, is a classically trained chef.

"Our family is from the state in Mexico called the Sinaloa," she says. "Seafood is popular in Sinaloa."

She recalls her father-in-law cutting up fresh fish. But Elizabeth didn't remember him wanting to get into the restaurant business. He changed ships when they moved to America.

"The old man had a dream and he did it," she says.

He as well as his wife are in their mid 50s and couldn't have cooked up a better success story. Castro, his sister, is the captain of the kitchen. She sent Neighborhood Eats boatloads of food to taste from their menu.

There were five varieties of cerviche on the Botano Bucanera. Fresh and not overwhelming. Que Rico!

To wash down the catches of the day, the decorative and flavorful Michelada Bucanera. The popular La Gran Panchanga: 12 premium Mexican beers covered in shrimp, red onions, peanuts, limes, cucumbers and three shots of tequilla. It's definitely a group dish. Que Rico!

The Cervantes are already considering another expansion but nothing is confirmed.

That's this week Neighborhood Eats. If you have a suggestion for Marvin, send him an email (mhurst@kens5.com) or tweet (@mhurstkens5). You can also make a suggestion on our KENS 5 Facebook page.