As of 8:05 p.m. Wednesday there were still about 58,000 electricity customers in the Houston region without power. 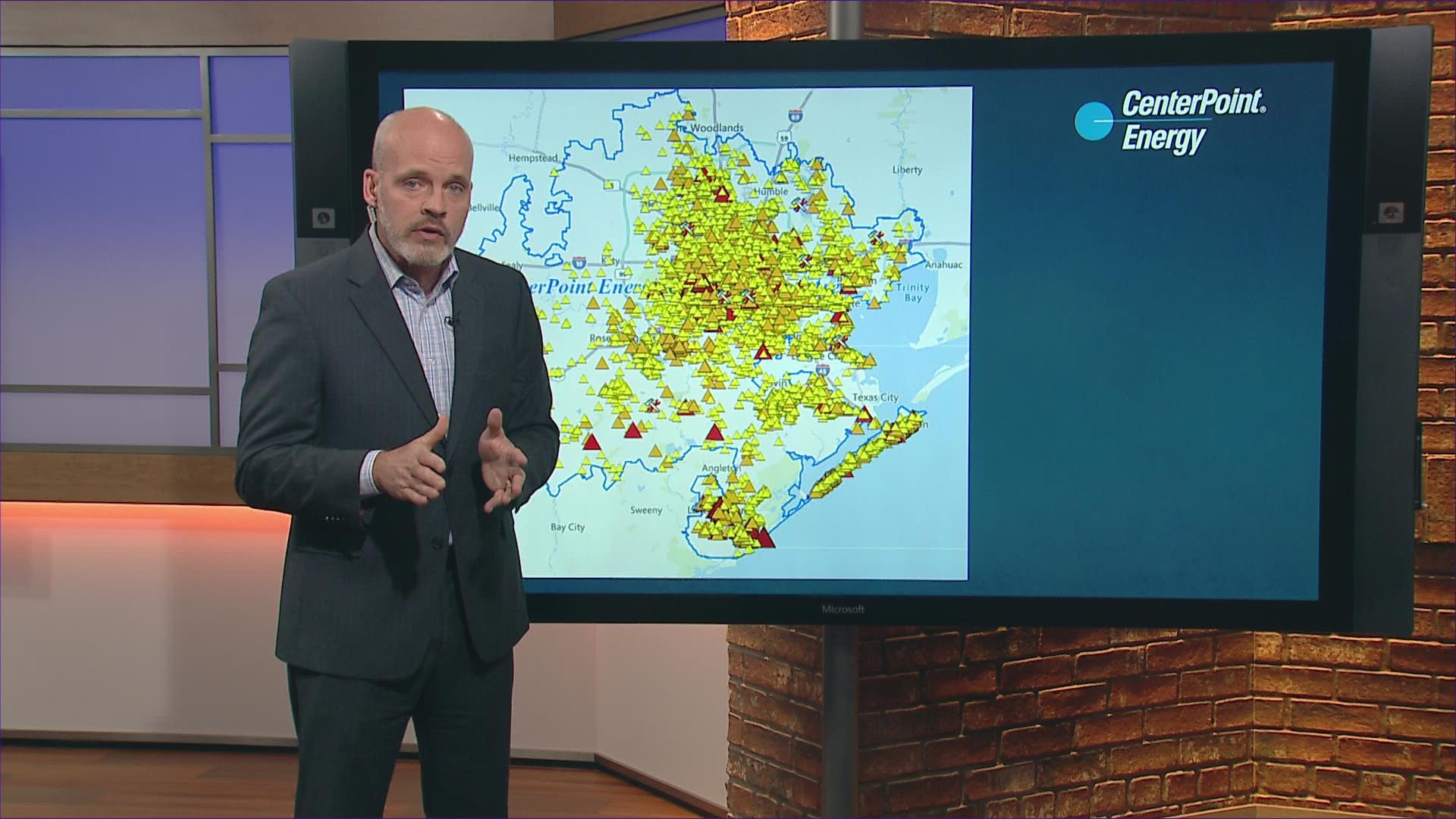 It was a hurricane at the time of landfall near the town of Sargent, but just a few hours later was downgraded back to a tropical storm status as it moved through Houston. It still packed enough punch to knock over trees, take down some powerlines and trip transformers.

VIDEO: See some of the damage on the KHOU11 YouTube Channel

RELATED: Which areas get power repaired first and why

In a 10:18 a.m. press released on Wednesday, CenterPoint Energy said it expects to have the majority of its customers back online by the end of the day. Some isolated cases could take through the end of the week to fully restore.

“We have made excellent progress so far safely restoring service to our customers who were impacted by Hurricane Nicholas, and our crews continue to work diligently and around-the-clock to address all remaining outages as safely and quickly as possible,” said Kenny Mercado, Executive Vice President, Electric Utility, CenterPoint Energy. “We appreciate our customers’ continued patience and understanding as we work to address the more challenging outage issues caused by the storm’s extensive damage to some parts of our system.”

CenterPoint reported 41,879 customers in the immediate Houston area were without power, but that's down from a Tuesday peak of about 460,000 as repairs continue. Mayor Sylvester Turner said that morning about 150,000 of those early outages were in the City of Houston alone.

In Brazoria County and portions of Galveston County, provider Texas-New Mexico Power reported there were 13,054 customers impacted as of Wednesday afternoon. Entergy, which services areas north and east of Houston, farther inland, reported about 289 power outages.

In a 9 a.m. Tuesday interview on KHOU 11, a CenterPoint spokesman said it would be a multi-day event to get power 100 percent restored, especially to its customers in Brazoria County, which was hardest hit.

How to track power outages

Overnight crews restored power to over 20K #Houston-area electric customers, reducing the total number of outages from a peak of 460K yesterday to 80K this morning. Remaining outages affect smaller groups of customers and may take longer to repair. #hounews 1/2 pic.twitter.com/Gib0iCyLq5

Some of the earliest and largest CenterPoint power outage numbers were reported on Galveston's West End late Monday night.

While much of the worst of Nicholas has remained off the coast, wind gusts have been high enough to cause issues with power lines, with some lines reported down.

In a news conference Monday night, Houston Mayor Sylvester Turner said CenterPoint crews are ready and will restore power as quickly as possible.

"I can assure you they have plenty of people that are out there deployed to get power restored," Turner said.

CenterPoint also reminded residents to be aware of downed power lines that could be hidden by floodwaters so don't drive or walk through flooded areas.

#Houston Storms can damage power lines; be especially mindful of downed lines that could be hidden in flood waters. Don't drive through flooded areas & treat all downed lines as if they are energized. If you see a downed line, stay away, and call 713-207-2222. #houwx #TSNicholas pic.twitter.com/sM4HD0C8q3

ERCOT's Monday statement on Hurricane Nicholas ahead of landfall

The Electric Reliability Council of Texas (ERCOT) issued a statement Monday evening saying it's "preparing the grid to maintain reliability in the face of rain, winds and potential flooding."

ERCOT said any power outages related to Hurricane Nicholas will most likely be at the local level and caused by powerful winds toppling power poles and tree limbs falling on power lines.

"As Tropical Storm Nicholas bears down on Texas, the Electric Reliability Council of Texas (ERCOT) is preparing the grid to maintain reliability in the face of rain, winds and potential flooding.

In addition to officially alerting ERCOT market participants of the weather threat, ERCOT has acted to reduce planned maintenance-related outages in the area most likely to be affected by Nicholas and instructed power companies to implement their emergency procedures in preparation for the storm.

Any power outages caused by the storm will most likely be at the local distribution level. Local outages can be caused by factors ranging from high winds toppling power poles to tree limbs falling on power lines.

Residents and businesses experiencing power outages should contact their local electric service providers to report those outages and receive updates on restoration times."