Multiple rounds of rain and storms are on the way for the first half of the week. This includes multiple opportunities for severe storms. 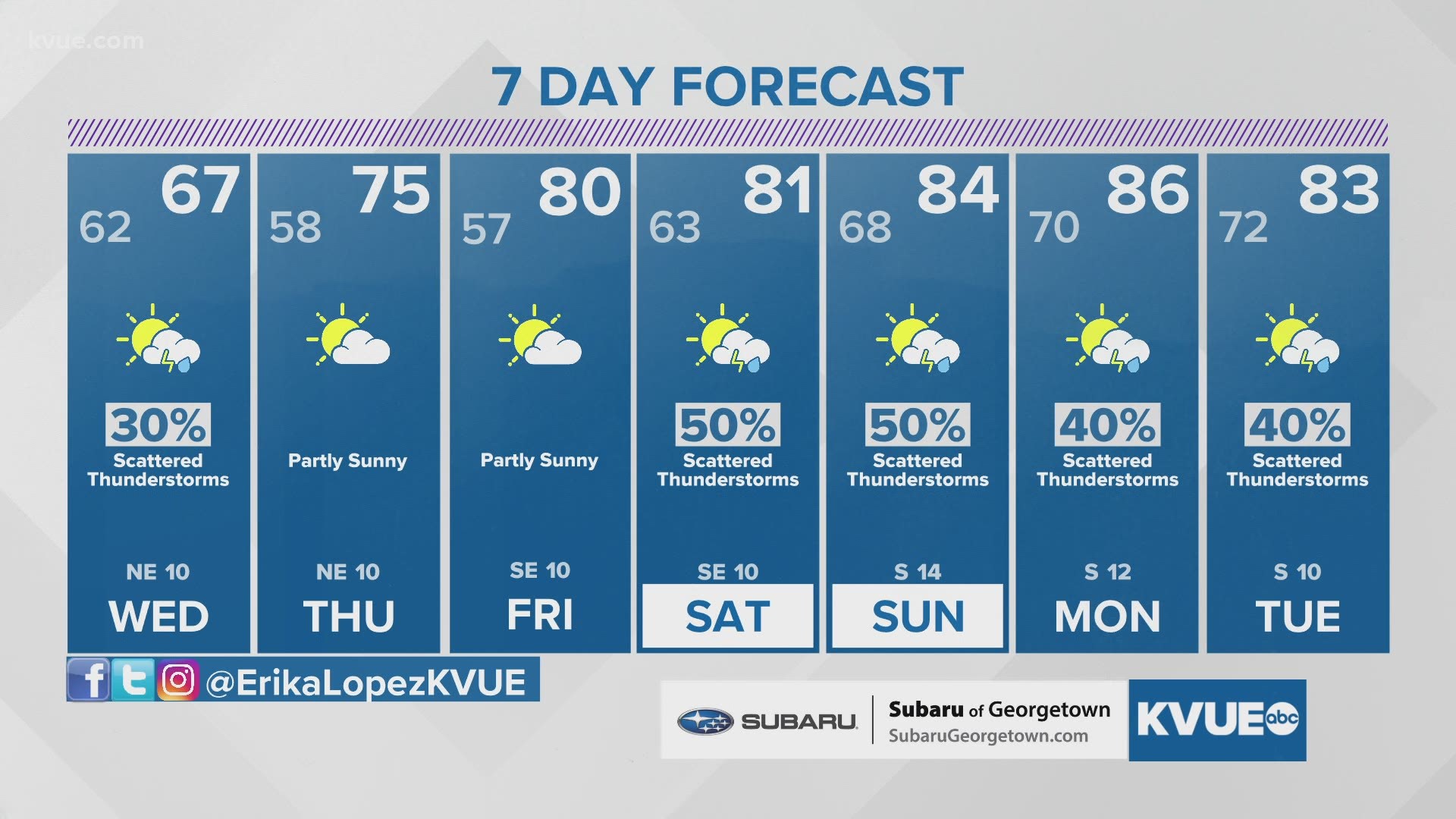 AUSTIN, Texas — Editor's note: This blog is no longer active.

Strong-to-severe storms will be possible once again on Tuesday as a cold front has stalled just to the south.

The most widespread storms of the week are expected on Tuesday with a rain chance of 80%. All of Central Texas has been placed under "slight" risk for strong storms on Tuesday.

Here are the latest updates:

10:10 p.m. – The severe threat has come to an end for Central Texas. Mainly light rain will linger and clear overnight.

9:15 p.m. – A Severe Thunderstorm Warning for western Travis County has ended as the hail threat has weakened.

8:50 p.m. – A Severe Thunderstorm Warning for parts of Travis County is in effect until 9:45 p.m., affecting Lakeway, Lago Vista and Hudson Bend areas.

A Severe Thunderstorm Warning for Travis county is in effect until 11 May 9:45PM. #ATXWX #KVUE pic.twitter.com/4NdUBJGAH3

8:45 p.m. – The hail core is intensifying rapidly with the storm moving over Hamilton Pool.

Hail core intensifying rapidly with this storm moving over Hamilton Pool. This storm is moving northeast. Park your car under in the garage if your in the path of this storm! @KVUE #ATXWX pic.twitter.com/FPC2SCaM2F

8:25 p.m. – A strong storm has been tracked moving into Hays County.

Strong storm moving into Hays County. Here's a look at when it could arrive to your neighborhood. No hail detected with this storm at this time. #ATXWX @KVUE pic.twitter.com/c5tHq5z6KF

8:15 p.m. – The National Weather Service has downgraded the severe threat for most of Central Texas to a "marginal risk," which is a level 1 out of 5. Isolated severe storms are still possible, but the severe risk should end by around 10 p.m.

7:40 p.m. – A Severe Thunderstorm Warning has been issued for Blanco and Kendall County until 8:15 p.m.

6:20 p.m. – Pea-sized hail has been reported within a storm east of Seguin.

Pea sized hail has been reported within this storm east of Seguin. It's moving east so should stay mainly south of Luling. But Luling, you're still seeing a healthy downpour with cloud to ground lightning at this time. @KVUE #ATXWX pic.twitter.com/91grSY2eAH

3:45 p.m. – A Severe Thunderstorm Watch has been issued for parts of Central Texas, including Williamson, Travis, Hays, Blanco, Lee, Bastrop, Caldwell and Fayette counties, until 10 p.m. on Tuesday.

The main concerns will be the potential for large hail, damaging winds and an isolated tornado. Heavy downpours could create isolated flooding concerns as well. It once again looks like the stormiest weather on Tuesday will come late in the day during the afternoon and evening.

Scattered lingering showers will be in place Wednesday, but most of it will be light and most will remain dry. There will be no sever weather threat as well. Since we are on the back side of a stalled out boundary over South Central Texas, highs will only be in the 60s which is about 20 degrees cooler than average for this time of the year.  Drier weather finally moves in by Thursday and Friday, but the dry weather won't last for long.

The wet weather pattern is expected to return this weekend through the start of next week. Rainfall totals of one to three inches are expected to be widespread across Central Texas over the extended forecast period.This means more beneficial rain but also the potential for flooding, especially in areas still saturated from recent rains. It is still too far out to tell if there will be any severe weather threat over the weekend through early next week.

The KVUE Storm Team will continue to closely monitor this developing forecast.

In the meantime, the extended forecast can be found below: 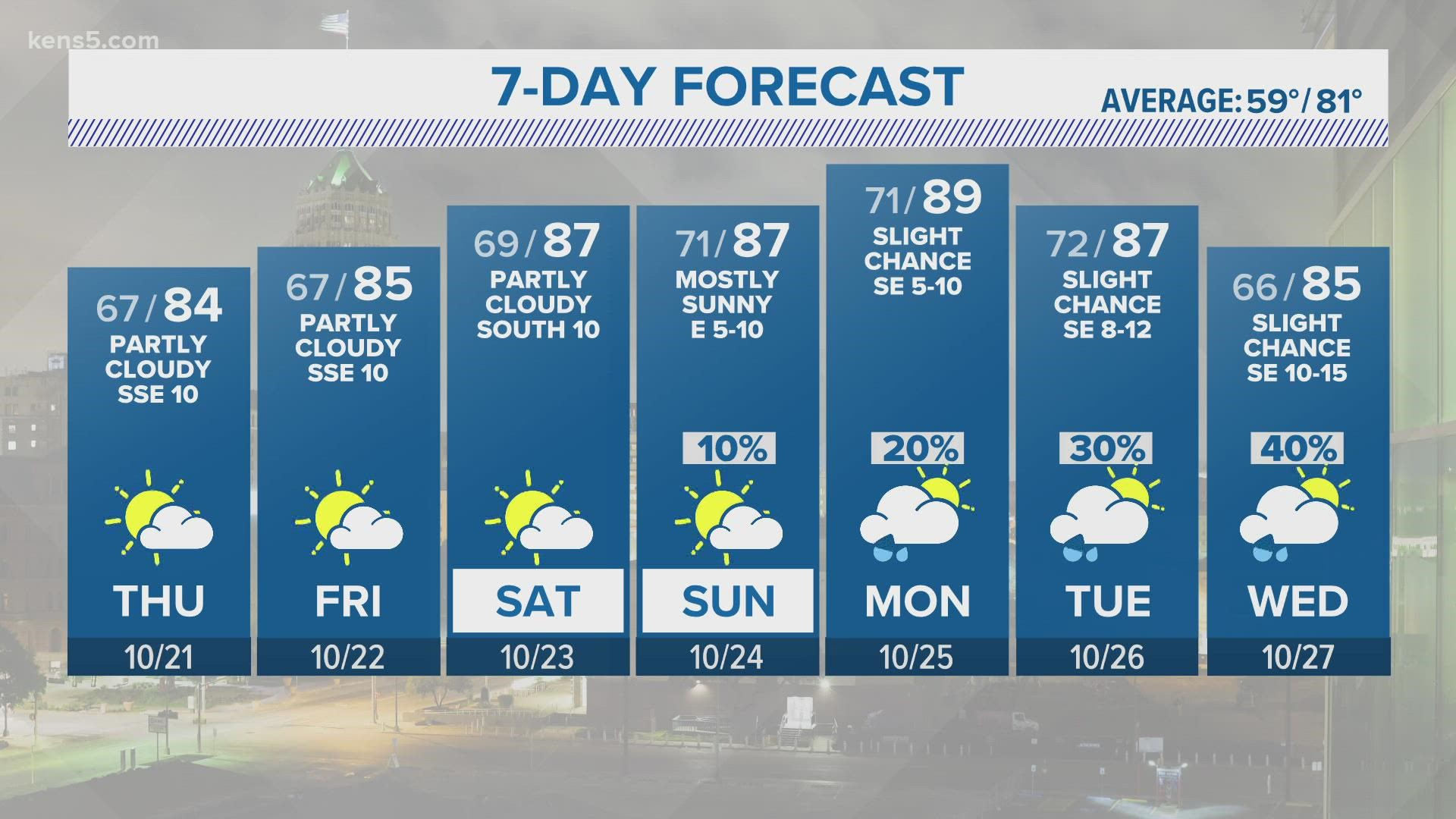 Humidity ramping back up, raising temperatures as well | KENS 5 Forecast