After dropping record rain in South Florida, a system remains on track to become the first named storm of the 2020 Atlantic hurricane season. 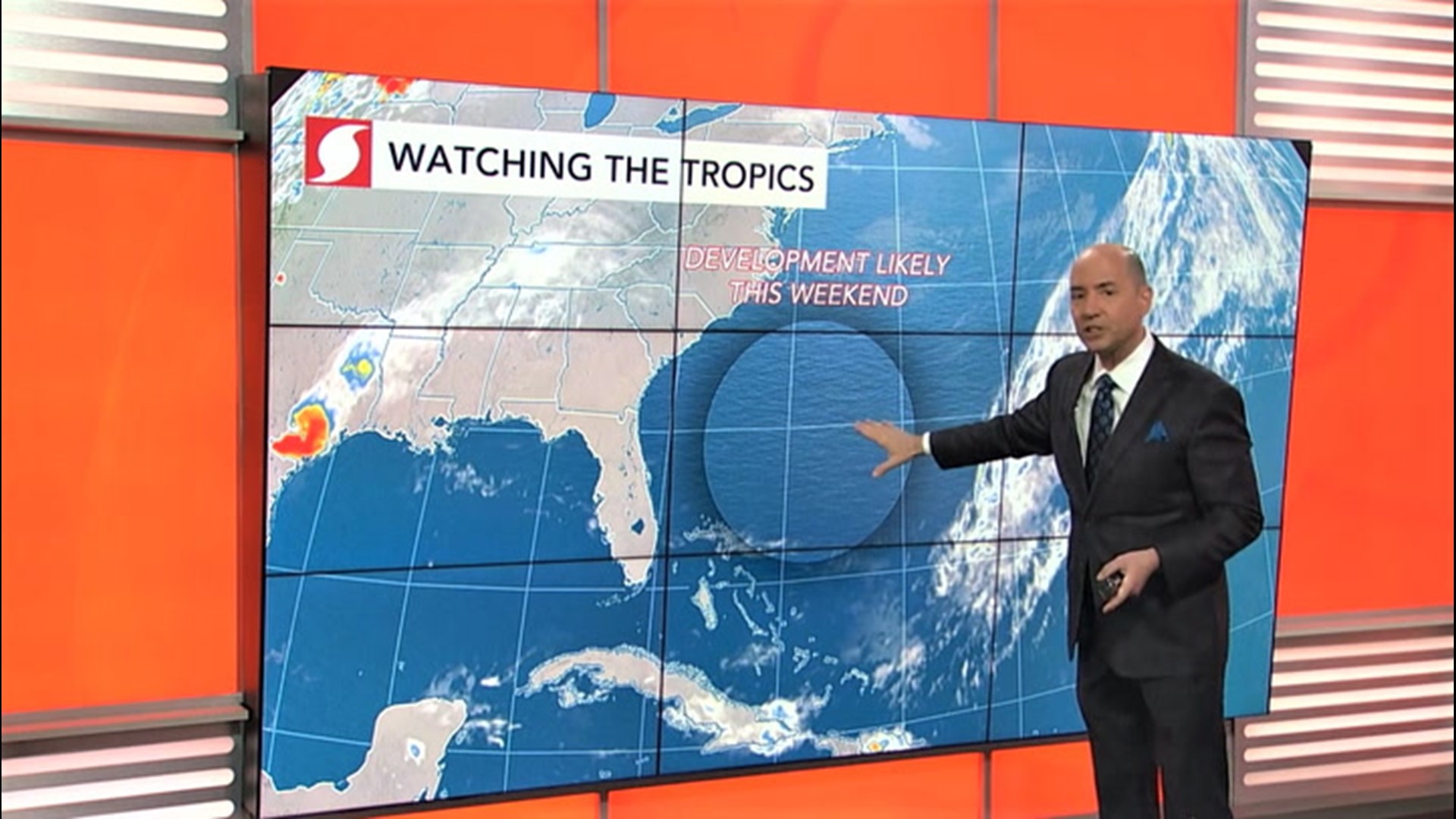 After dropping record rain in South Florida, a system remains on track to become the first named storm of the 2020 Atlantic hurricane season this weekend.

AccuWeather meteorologists expect conditions to become more conducive for the system to organize into a tropical depression or storm over the warm waters offshore of Florida and near the Bahamas.

"It is not out of the question this can happen late Friday, but more than likely, it will take until Friday night or Saturday for the first storm of the season to form," Dan Kottlowski, AccuWeather's top hurricane expert, said.

If the storm does not organize until later Saturday or Saturday night and it moves over slightly cooler water, it will likely be called a subtropical depression or storm - meaning it would be a hybrid of both a tropical and non-tropical storm.

Regardless, the first tropical or subtropical storm of the 2020 Atlantic hurricane season will be called Arthur.

After likely being named, the storm will track offshore of the southeastern United States and pass about 100 to 150 miles off the coast of North Carolina's Outer Banks on Sunday night or Monday. Around that time, the storm should be at its peak intensity with sustained winds of around 50-60 mph, according to Kottlowski.

Residents of South Florida will continue to experience most of the impacts from this storm before it is classified as a depression or given the name Arthur.

Thursday was the second wettest May day on record for the city of Marathon in the Florida Keys. Heavy rain totaled 5.76 inches, stopping short of the city's rainiest May day record of 6.60 inches set on May 27 in 1959.

Downpours and thunderstorms will continue to stream over parts of southern Florida through Friday night as gusty winds blow. The heaviest downpours could trigger localized flash flooding in low-lying and poor drainage areas.

Even in the absence of flooding, heavy rain can still disrupt travel by reducing visibility and heightening the risk of vehicles hydroplaning when traveling at highway speeds.

Storm to bring near miss to North Carolina's Outer Banks

As it pushes away from the waters near Florida and the Bahamas, the storm and its heavy rain will remain well off the coast from northeastern Florida to southern North Carolina this weekend.

However, anyone planning to head to the beaches to seek relief from being pent up in recent months due to the COVID-19 pandemic should use caution. The risk of rough surf and strong rip currents will expand northward along the entire Southeast coast this weekend.

Along with the rough surf dangers, residents in the Outer Banks of North Carolina may also experience an uptick in gusty showers Sunday night into Monday.

"While it still appears that the worst of the storm will stay offshore, we are monitoring the potential for the storm to track closer to the coast and bring the Outer Banks more substantial rain and wind," Miller said.

Beyond Monday, the storm is expected to lose its tropical characteristics as it tracks over the cool water well west and north of Bermuda Monday night through Wednesday.

At this time, the storm is expected to track away from the Northeast as a new storm from the Midwest takes up residence over the eastern U.S. for a lengthy time next week and leads to an extended stretch of wet and gloomy weather for some in the region.

It is not out of the question that this second storm pulls in the system that is expected to be called Arthur or its tropical moisture, causing even heavier rain to soak a swath of the East.

Even if the tropical system remains separate and heads out to sea, the second storm alone can still disrupt outdoor plans and even impact medical tents that are treating COVID-19 patients where its rain and gusty winds target the East.

The Atlantic hurricane season doesn't start officially until June 1, but there has been a named storm before that day every year since 2015 - a trend that this weekend's storm should continue.

An early start to hurricane season is not a true indicator of how active the season will be, but Kottlowski is concerned that the 2020 Atlantic hurricane season has the potential to be 'very active.'

AccuWeather's long-range forecasting team is predicting 14 to 20 tropical storms, of which seven to 11 will become hurricanes. Out of those hurricanes, the team anticipates four to six may strengthen further into major hurricanes (Category 3 or higher).