KENS 5 is tracking the latest traffic conditions as winter weather arrives in San Antonio and the Hill Country. 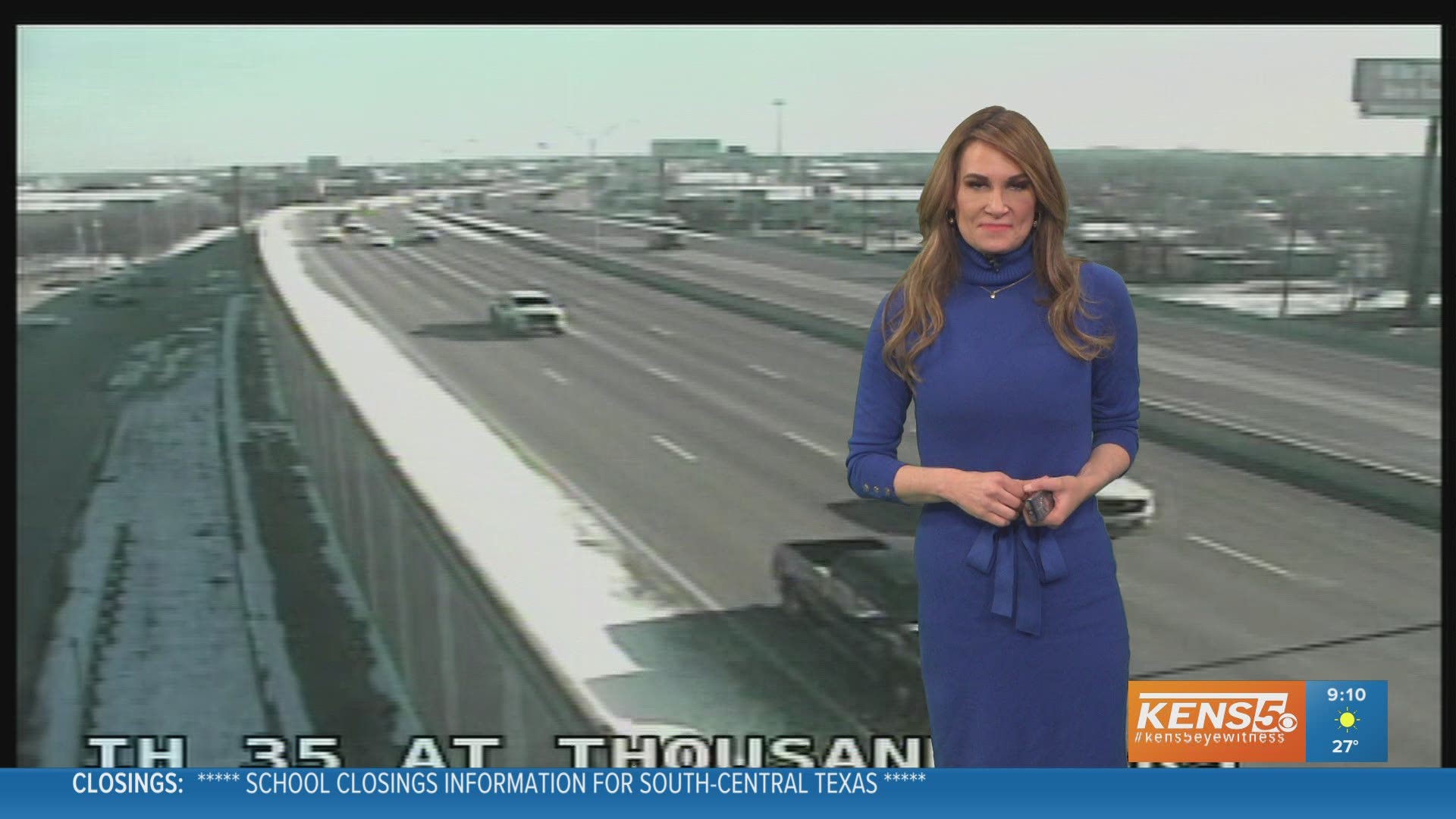 A Hard Freeze Warning is in effect until 9 a.m. Saturday. The Texas Department of Transportation is warning drivers if they need to travel Saturday morning to be extra cautious on the roads because "icy conditions may exist." See the full tweet here.

TxDOT says there is possible ice on I-10 EB frontage road between De Zavala and Huebner due to a broken water main. Use extreme caution.

Chopper 5 flew over San Antonio. Here's a look at the roadways:

Chopper 5: Ouch! It will be awhile before all connector ramps are cleared. #kens5eyewitness pic.twitter.com/wGnDdurDbX

A few highways remain closed due to icy conditions:

Stay home, if you can. If you must travel, use extreme caution. Please DO NOT drive around or move barricades. We want everyone to get home safely. pic.twitter.com/l7GQ2Q5Y6I

There are 39 roads closed due to the icy conditions. Most of these closures are near the downtown area or on the north side. A winter freeze is in effect until 10 a.m. See each closure here.

TxDOT is also urging drivers to stay off the road if they can:

UPDATE: 2/19 5:20AM ⚠️ICY CONDITIONS⚠️ Crews continue to monitor roadways and treat trouble spots across the San Antonio region. Please stay home, if you can. If you must drive, slow down, stay alert and use extreme caution. Visit https://t.co/ZJlJsJTzw7 for latest conditions. pic.twitter.com/6pp59H8pjQ

The worst of the winter storm is now behind San Antonio, including multiple rounds of snow and sleet, but overnight temperatures in the 20s will harden moisture left on the ground from Thursday's precipitation.

As a result, it may be difficult to drive on San Antonio roadways until about 10 a.m., when that remaining ice and snow will begin to melt with rising temperatures.

UPDATE 2/18 7:15 PM - As the temperature drops below freezing this evening, the snow and precipitation can turn into ice. Please avoid travel if possible. If you must drive, please slow down, stay alert and use extreme caution. #BeSafeDriveSmart pic.twitter.com/hqRKIbEisA

TxDOT employees have been working tirelessly through the storm to prepare the roads for these wintry conditions. Travel is not advised. 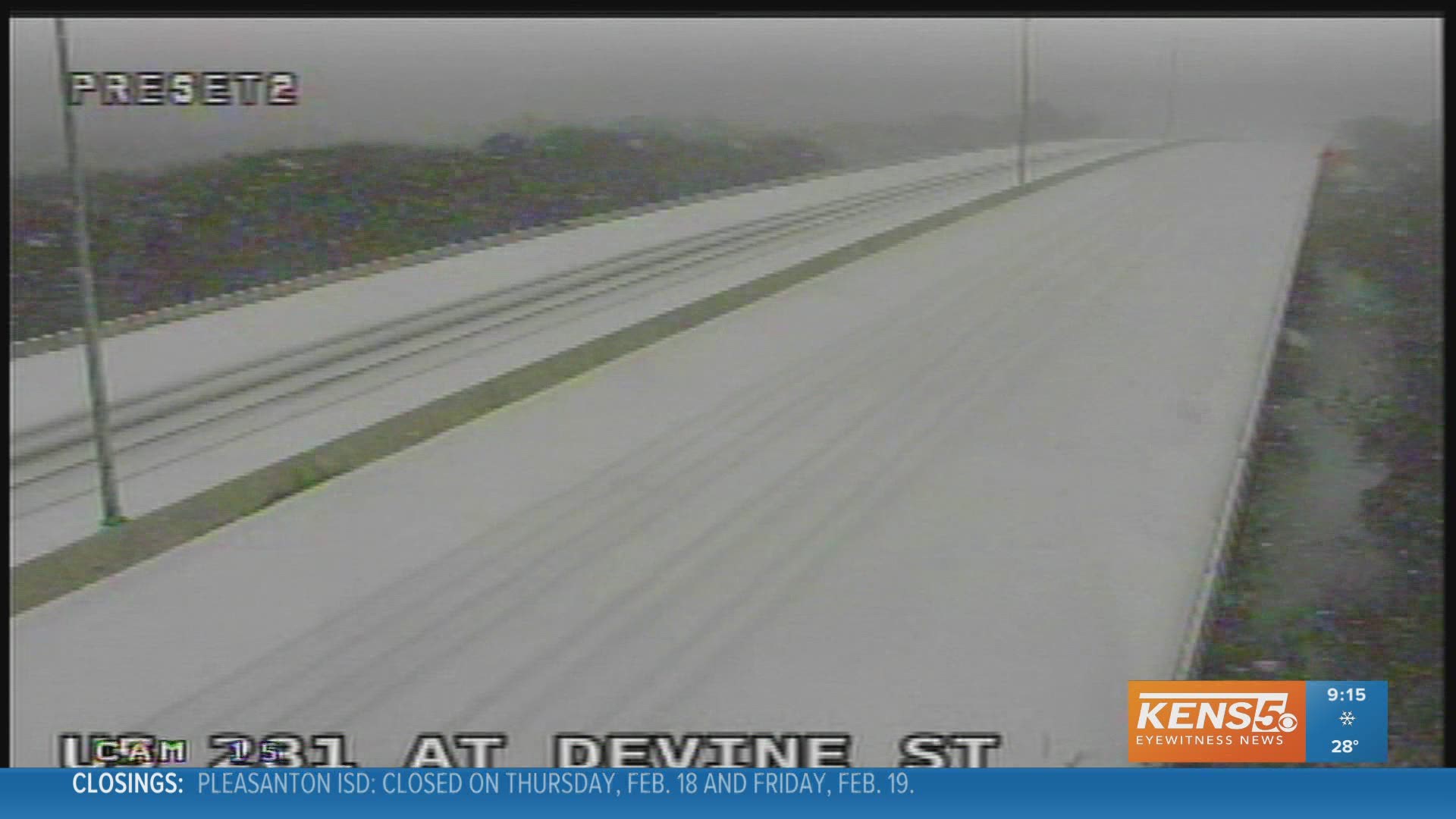 Although some roads have opened, the wintry weather could have an effect on the roadways later in the day. Be careful if you need to be on the roads. Authorities advise you to stay home unless it's absolutely necessary to travel.

Heaviest snow accumulations are forecast across portions of the Rio Grande Plains, southern Edwards Plateau, and western Hill Country, mainly west of I-10 and along and north of U.S. 90. pic.twitter.com/gsSkwoITAL

Another round of wintry mix is coming down in San Antonio overnight, and though ice accumulation on the roads won't be as severe as it was earlier this week, transportation officials are still encouraging commuters to be wary on the road.

UPDATE: 2/18 2:30AM - ⚠️ ICY CONDITIONS EXIST ⚠️ Road conditions continue to worsen on highways across San Antonio. Stay home, if you can. If you must travel, please use extreme caution. #TxDOTwx #BeSafeDriveSmart pic.twitter.com/mh7Bh9fFdc

There are 36 roads closed as of now in San Antonio. And according to the National Weather Service, another patch of light freezing rain and possibly sleet is moving through the Hill Country. Meanwhile, moderate freezing rain areas from early this morning continue to retreat east.

There is also a huge traffic backup on Interstate 10 near UTSA Boulevard on the northwest side.

There’s a huge backup on I-10 near UTSA Blvd. on the northwest side. It’s a wall-to-wall standstill right now. Your best bet will be surface roads for now. We’re forecasting more melting on roadways starting this afternoon. https://t.co/zyLnUeRXAM pic.twitter.com/f52SfMlyRl

TXDOT is reminding people that if you don't need to be on the road, stay home.

UPDATE: 2/17 8:51 ⚠️ICY CONDITIONS REMAIN⚠️ Crews are out treating roadways. We continue to discourage drivers to stay off the roads. Visit https://t.co/ZJlJsJBYEz for current conditions. https://t.co/l3lmkvqAIf

All streets and bridges in New Braunfels should be considered impassable until further notice. Authorities are advising the community to not travel at this time.

With the freezing rain and low temperatures, all streets are covered in one to two inches of ice. "It is extremely dangerous to travel at this time and will remain so until temperatures rise above freezing and the ice melts off of roadway," The City of New Braunfels says.

Big problems on the roads! This is the worst ice I’ve seen all week. TxDOT is still asking drivers to stay home. Stay safe everyone ❤️ pic.twitter.com/9GJB5XX3Lr

A look at Texas roads as the National Weather Service calls travel "impossible" this Wednesday morning: 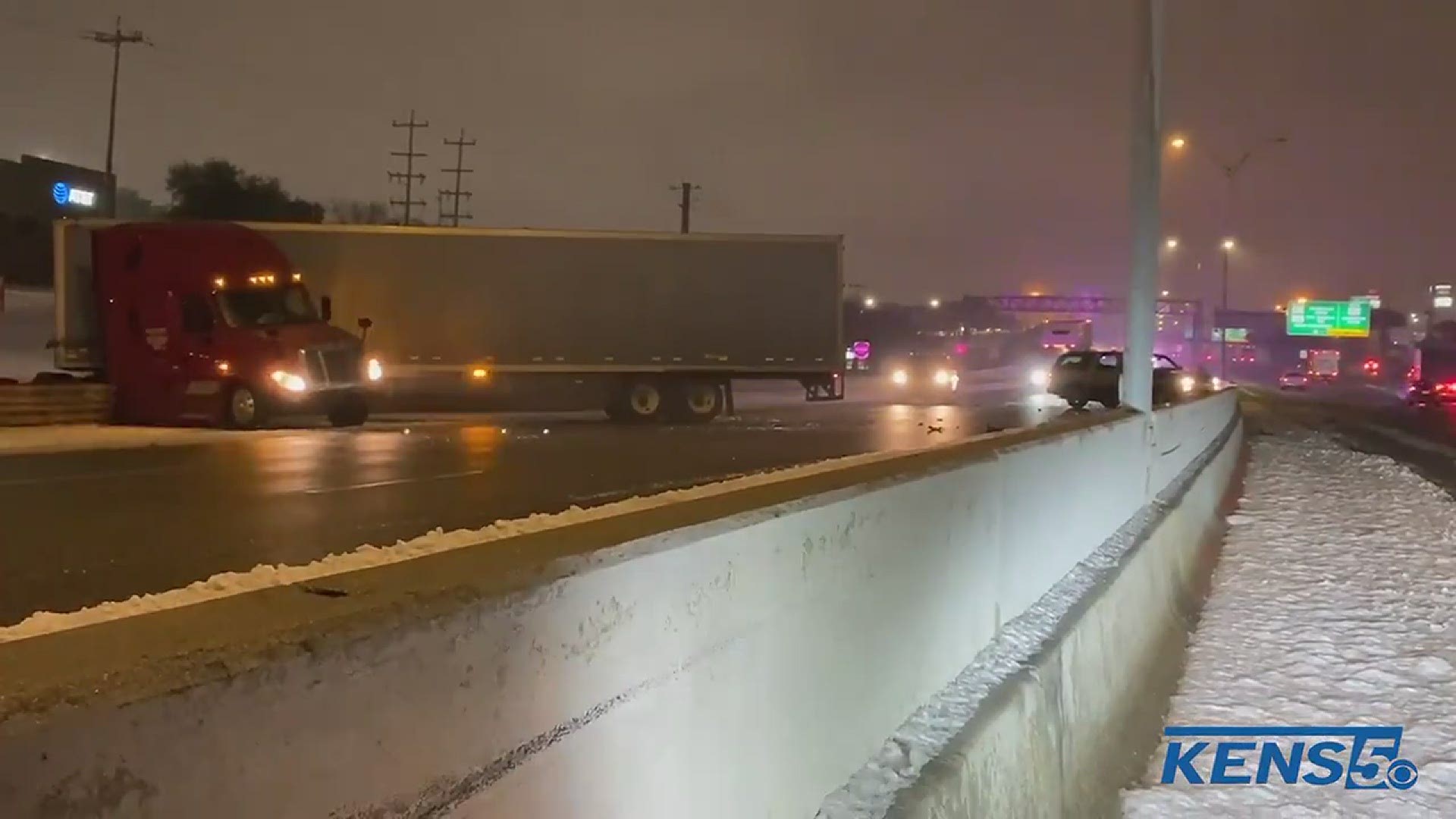 Overnight freezing rain in the San Antonio region, particularly north of I-10, has led to major ice accumulation on roads—making travel a particularly dangerous endeavor, if not an impossible one.

TxDOT San Antonio is reminding drivers that entrance ramps to major highways remain close. Some highways have reopened, but drivers need to exit and use the frontage road to transfer to another highway.

We are advising drivers that entrance ramps to major highways are closed due to ice. Drivers on the highway will need exit and use the frontage road. Please stay home and stay safe! #TxDOTwx #BeSafeDriveSmart pic.twitter.com/JnkSaOoBcD

Some highways are now open after TxDOT crews treated them after the icy conditions. Eyewitness News reporter Holly Stouffer gave this update: 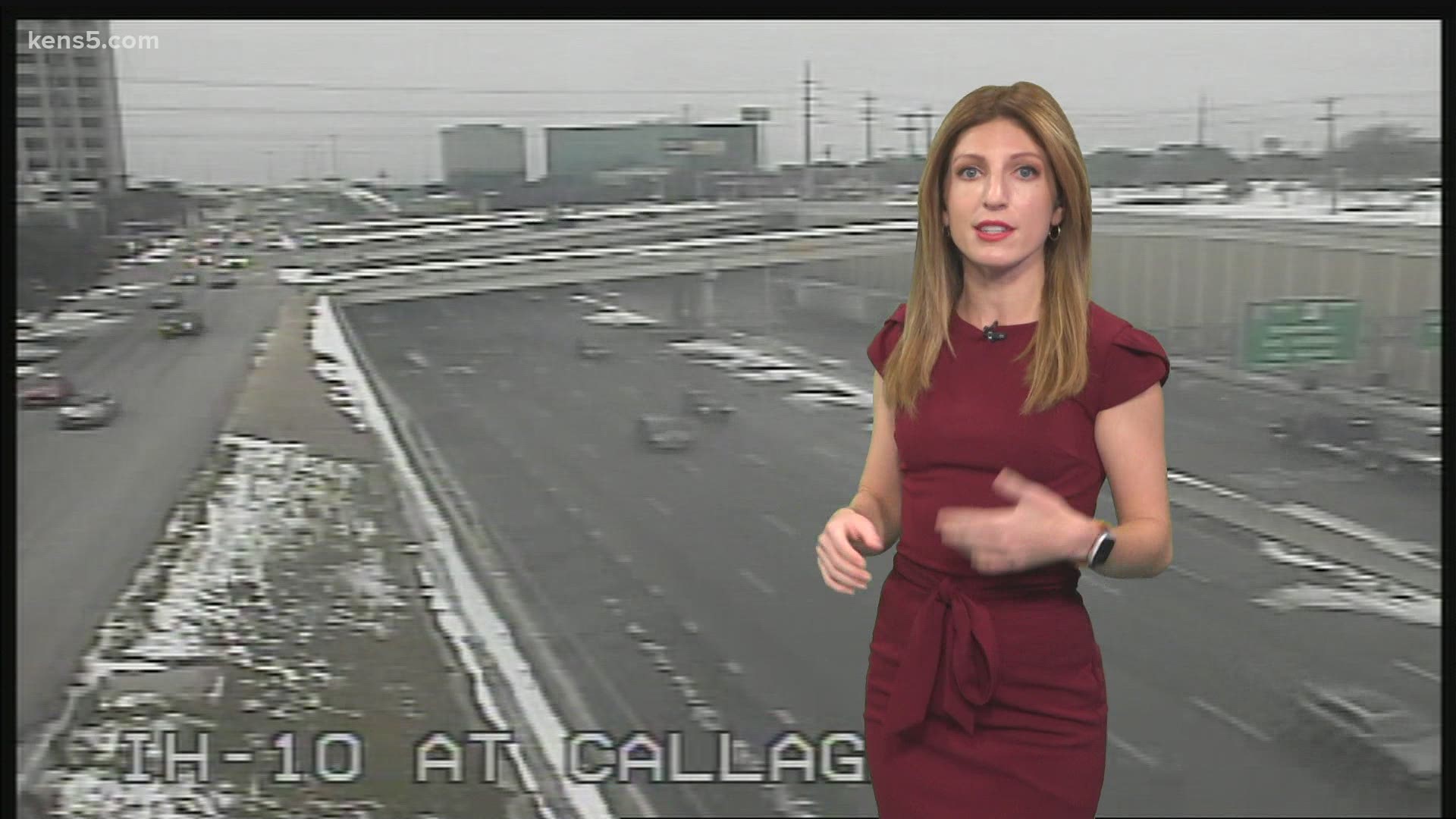 Don’t walk on the highway. It is too dangerous. Drivers could lose control and hit you. #ATXtraffic #txdotwx pic.twitter.com/3XDSWCd0XM

⚠️ If you must travel this morning use extreme caution. Melting snow yesterday has refroze. Patches of slick ice spots are now on some roads and sidewalks. pic.twitter.com/RwT9Blt3Zu

TxDOT officials say that all major highways in the city remain closed to commuters as ice hardens up in the overnight freezing temperatures.

TxDOT San Antonio announced that they are immediately closing all major highways due to ice, and directing drivers off those roads. They reminded residents to stay home and off all roadways.

Monday 12 p.m.: Kerrville Police Department posted an update on the power outage at traffic lights in the town.

Crews continue clearing snow and treating lanes on major highways across San Antonio. We ask everyone to stay home and off the roads. If travel is essential, please slow down and give crews plenty of room. #TxDOTwx #BeSafeDriveSmart pic.twitter.com/UduKzyZsIR

Monday 6:30 a.m.: There are 32 roads currently closed in Bexar County. Majority of the closures are near the downtown area. Click here to see the full list. 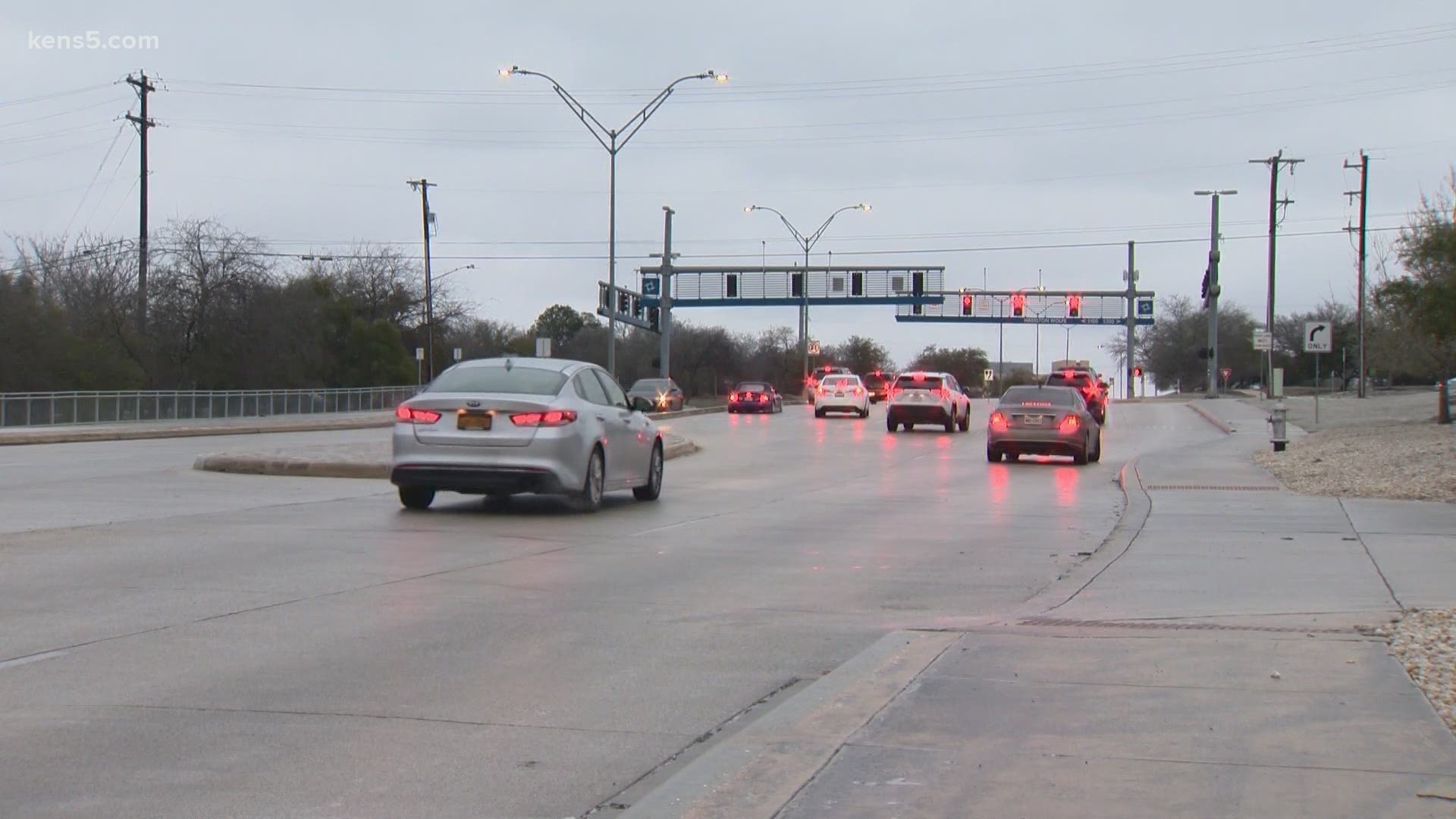 Crews will begin clearing snow on major highways this morning. It's important to keep roadways passable for first responders and essential workers. Please stay home and stay off roads. If travel is essential, slow down and give crews plenty of space. #TxDOTwx #BeSafeDriveSmart pic.twitter.com/l5OOwgGka2

The City of San Antonio and Bexar County are closing some roads and highway segments. Conditions will worsen overnight and through Monday. The public should stay at home unless it is absolutely necessary to travel, the city's Office of Emergency Management said.

As a result of the dangerous, icy conditions many City streets, Bexar County roads and TxDOT highways are being closed, including:

All major highways to include:

Due to the severe winter weather we are currently experiencing in the San Antonio region, the following roadways will be closed until further notice. Please stay home and stay safe! #TxDOTwx #BeSafeDriveSmart pic.twitter.com/SwQtfWz8tB

Loop 410 over Wurzbach looking decent for now. Surely will not be the case in a few hours. #winterweatherwatch #kens5eyewitness pic.twitter.com/vJvhYU763n

Sunday 1 p.m. The San Antonio Fire Department posted a picture of an overturned fire engine on its Facebook page. Luckily, the crew was ok. See the full post below:

Sunday 12:30 p.m. Kerrville officials posted the latest road closures on its Facebook page, including the continued closure of Loop 534. The full post is below:

We are urging everyone to stay home and stay safe! If you must drive, slow down and use extreme caution. Check weather forecasts and visit https://t.co/ZJlJsJBYEz for road conditions. #TxDOTwx #BeSafeDriveSmart https://t.co/Lse06t02Zl

Driving Tips for Ice and Sleet:

TxDOT is encouraging everyone to stay home throughout the morning until the sun can help dry the roads. If you do have to drive, here are some tips from TxDOT: