'A tragic day for the Fort Worth family': At least 6 killed in 133 vehicle pileup crash on I-35W in Fort Worth, officials say

At least 65 people received treatment either at the scene or in local hospitals as of Thursday. Less than 20 remain hospitalized per MedStar Health. 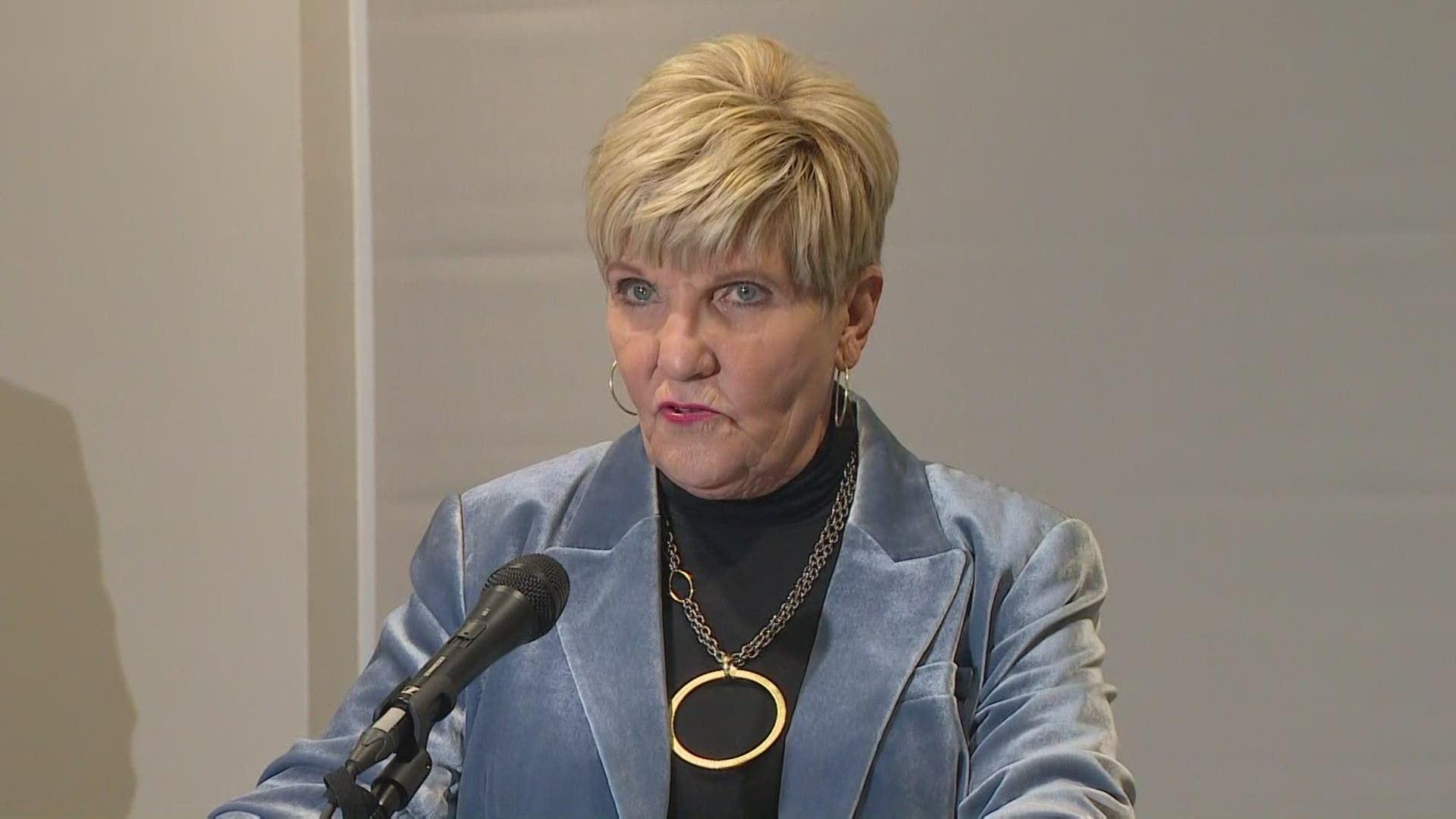 This story has been thoroughly updated. For the latest updates on Friday, Feb. 12, click here.

At least 133 vehicles, including several 18-wheelers, were involved in a massive pileup crash Thursday morning on Interstate 35W in Fort Worth, officials said.

At least six people have been confirmed dead. The total number of injuries remains unknown, Fort Worth police said, but at least 36 were taken from the scene to local hospitals.

No updates were given about how that the stretch of road on Interstate 35W was treated prior to the crash.

Earlier, a Fort Worth Fire Department spokesperson confirmed to WFAA that the department brought their own salt to the scene of the crash as a part of protocol during icy conditions. They said the department has no idea if the road was salted before the crash, and said that finding that out would be a part of the department's investigation.

Officials with North Tarrant Express, which is where the crash happened, said that their maintenance crews started pre-treating corridors on Tuesday and have been spot treating them since then. Their crews will continue to spot treat the highways through the weekend and into next week.

RELATED: Woman survives 100-plus-car pileup, crawls out back window on I-35 in Fort Worth

Noakes reiterated during the conference that the police and fire departments would continue to work to find out more about the roads being salted. Price also added that the City of Fort Worth has been working to salt the roads in the city for days leading up to this weekend's cold weather and will continue to do so.

During the news conference, Davis confirmed six people have died from the pileup crash. He also said 36 people were transported from the scene to local hospitals, and 29 people either sought treatment from injuries either on-scene or at a local hospital themselves -- bringing the total injured to 65. Davis said that number could increase in the coming days. 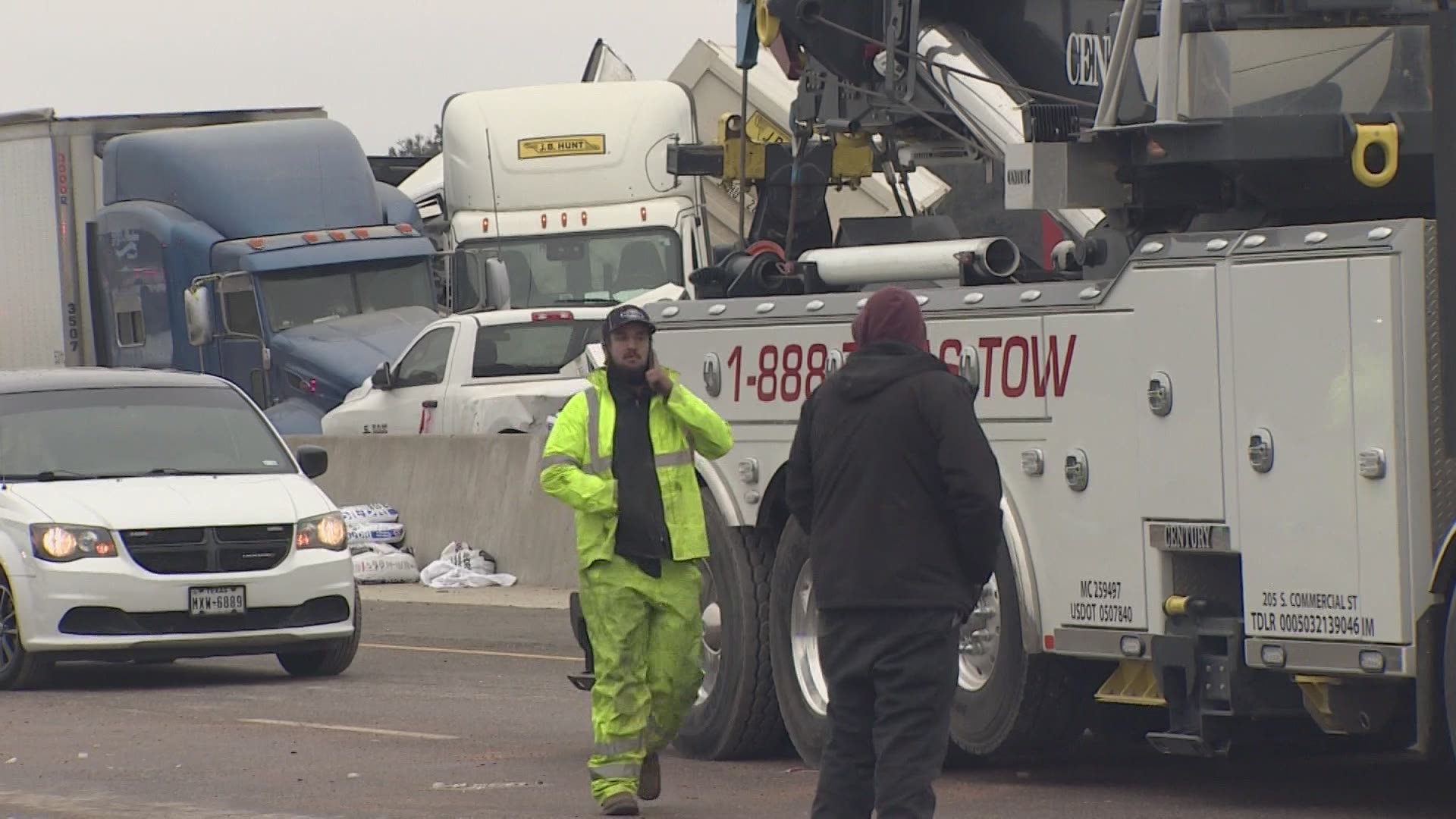 "This is something that agencies train for but hope never happens," Davis said.

Less than 20 remain hospitalized as of Thursday, per Matt Zavadsky from MedStar Health.

Zavadsky said thankfully, there were no children involved in the crash. However, many of the patients treated were health care workers themselves, some on the way to or from their jobs at hospitals.

"We did see a large number of people that were victims of this accident that were in scrubs, that had hospital IDs on," Zavadsky said.

Four Forth Worth police officers were also injured in relation to the crash -- three were in cars headed to work and one was injured while responding to the scene.

Authorities are asking anyone who suspects their loved ones might have been involved to call 817-546-7826.

"This is a tragic day for the Fort Worth family. As we always do, we will get through this," Noakes said.

Price tweeted her condolences Thursday afternoon and asked people to pray for Fort Worth.

"My heart is breaking for our community as we come to learn about the extent of the losses we are experiencing from today’s accident," Price wrote. "Our community is pouring out support, and I know that so many of you are asking for a way to help. Right now, what Fort Worth needs most is your prayers – for the families, the injured, and the first responders. We will share updates in the coming days with any additional ways to support those in need during this difficult time."

My heart is breaking for our community as we come to learn about the extent of the losses we are experiencing from today’s accident. Our community is pouring out support, and I know that so many of you are asking for a way to help. (1/2)

"I just want to reiterate this is an incredibly difficult day," she said during the 4:30 p.m. news conference. "So many people have lost loved ones or had them injured. This whole community will feel their pain."

The crash happened around 6 a.m. Thursday as drivers were dealing with pockets of inclement weather across North Texas, including freezing rain.

A number of people remained trapped hours after the crash happened and patients were still emerging from vehicles at the crash scene as of 8:30 a.m., officials said, with an estimated 36 people needing medical transport. Many of them had serious injuries and several were life-threatening, officials said.

Crews were able to take all of the victims they could access and who needed medical treatment to the hospital. An unknown number of people were treated and released at the scene, authorities added.

Preliminary information on MCI in Fort Worth. More info will be released later. At least 100 vehicles involved, 5 fatalities, 36 transported to local hospitals. #yourFWFD continues to work the incident and will be on scene for several hours. pic.twitter.com/DUtRJFKSI9

Information and estimates were rapidly changing as crews worked their way through the scene, and the number of patients was "growing by the minute," officials said around 8:30 a.m.

Fire department officials said during a morning news conference that they had to go vehicle-by-vehicle to check for anyone still trapped.

RELATED: Watch: Firefighter saves dog from truck hours after deadly pileup in Fort Worth on I-35W

First responders reported some cars wedged underneath other vehicles, causing some of the uncertainty around how many causalities there are. Officials said Thursday morning there are some fatalities still likely on the scene and it could take some time to reach the bodies.

The official cause of the crash has not been determined, as officials prepare for a lengthy investigation, but there were several reports of black ice earlier in the morning throughout North Texas.

Warning: This video shows part of the crash as it happens. It contains sensitive content and explicit language:

There were a number of vehicles, however, that were heavily damaged and they have not yet cleared all vehicles. To do so will take time, officials said, as they need wreckers to remove the layers of damage and debris to get to each vehicle.

A MedStar unit was one of the vehicles involved in the crash, according to officials, but the first responders and other drivers involved were not injured.

First responder teams sent 14 ambulances and an ambulance bus to the scene to provide onsite care. Fort Worth Fire sent 26 response vehicles, and Fort Worth Police sent more than 80 police units to the scene.

The crash was declared a "mass casualty" event. Officials said they had used the bus to keep victims from developing hypothermia as well.

Even walking at the scene was "treacherous" due to icy conditions, Zavadsky from MedStar said during the morning news conference. He added that the number of victims they extricated from the crash scene was "amazing."

MedStar told WFAA earlier Thursday that they had a number of patients they could not move from the scene initially as an 18-wheeler had partially blocked the road and traffic has them blocked in from behind the crash.

First responders also had difficulty even getting to the crash site, due to the slippery conditions of the roadway, as well as due to the traffic build-up.

It's unclear how seriously injured drivers/passengers are but
details from a Fort Worth Police incident report, are alarming. Someone reported hearing drivers screaming from their cars, first responders had trouble getting those in need of treatment away from the scene. @wfaa

The accident scene stretched around 1 to 1.5 miles long, with Fort Worth police reporting the scene at 1601 North Freeway and MedStar reporting it at the conjunction of I-35W and 28th Street.

Families are being reunited at Riverside Center at 3700 E. Belknap Street in Fort Worth, police officials said. Family members will be able to pick up their loved ones that were involved in the pileup there. Authorities are asking anyone who suspects their loved ones might have been involved to call 817-546-7826.

At least 30 people have shown at the family reunion center, officials said. In addition to those at the Riverside Center, some officers drove people, who had been involved in the wreck to either their homes or workplaces since they had no ride.

Authorities said people currently at the Riverside Center fall into one of two categories:

Fort Worth Police Officer Daniel Segura said investigators were on scene but, given the massive scope of the scene, it would take a long time for a full report as they determine what potentially caused the crash and what happened.

"For many of us this is a career event," Zavadsky said. "We train for this type of scenario but you never really expect it to happen."

Fort Worth Fire Department Engineer Mike Drivdahl echoed that sentiment as he spoke of the first responders who were working the scene.

"An event like this is not something many of them will see again," he explained.

All lanes have been blocked and the scene is not expected to be cleared before the end of the day.

To avoid the crash and major traffic backups behind it, drivers east of I-35W can take Sylvania, Beach St or Riverside. For drivers west of I-35, Business 287 could be an option.

Officials warned drivers to slow down, keep their distance and wear their seatbelts especially as inclement weather is expected to continue throughout the weekend.

Download our free WFAA app to stay up-to-date on all news stories in the Dallas-Fort Worth area.