As the pandemic continues, it's time to see the internet as a utility

When school went online, districts scrambled to get WiFi hot spots for thousands of kids. That didn't fix the problem. 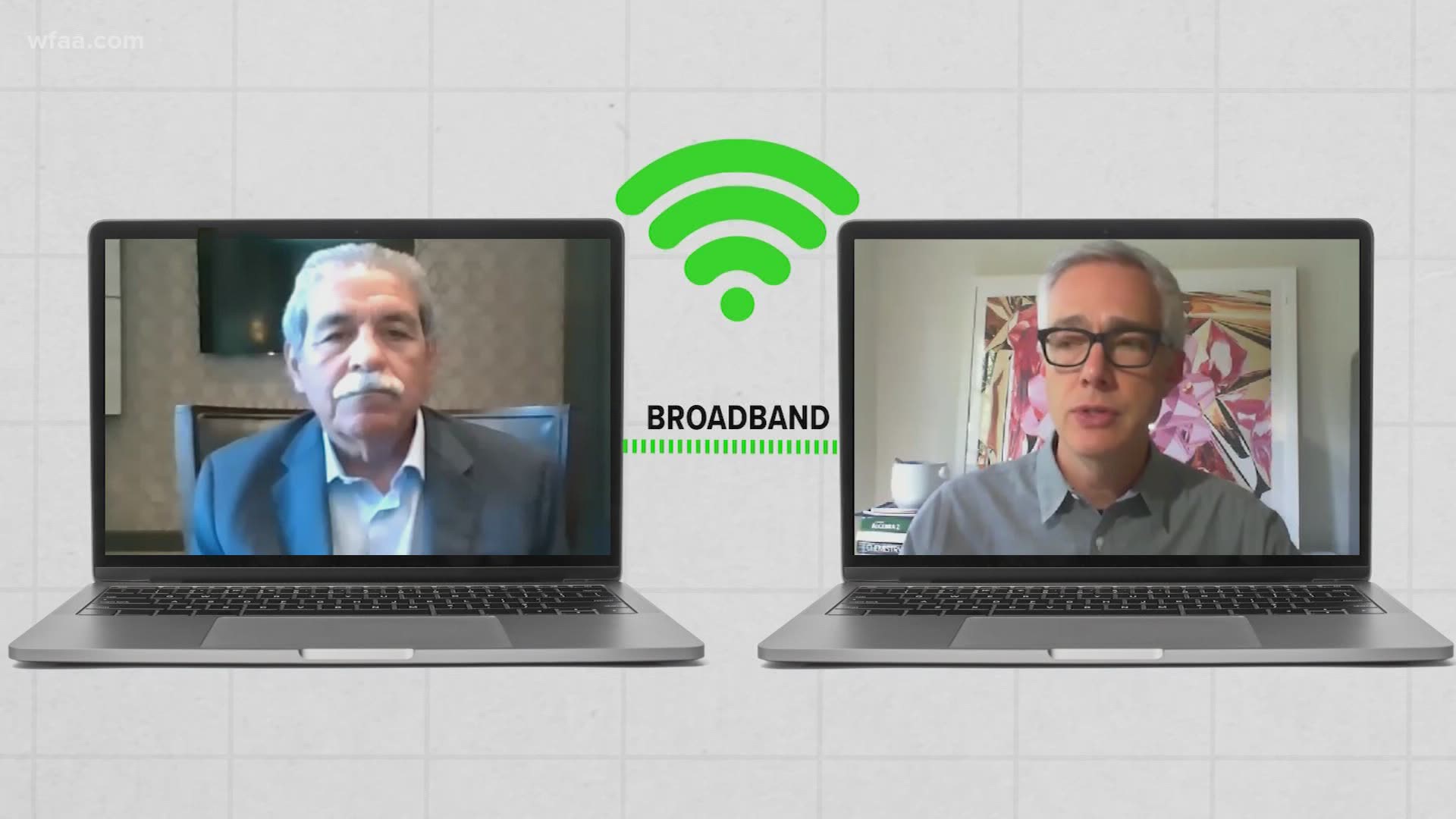 DALLAS — In almost every American home and apartment today you will find running water and electricity. But how about the internet?

Here's what I want to know: Has the coronavirus pandemic made a home internet connection just as essential as water and power?

“At first, they had to send us a photo of their homework because until we got them a hot spot, they couldn't send an email because they couldn't connect,” he said.

Research from the Federal Reserve Bank shows Dallas currently ranks 6th in the country for cities with the “worst connection” to the internet.

Large school districts across Texas solved the problem with mobile hot spots. They’re more expensive and slower than home internet but, as a quick solution, far easier to pull off.

RELATED: North Texas districts try to reach students who have not logged on for online learning

“How many hot spots did you have to buy?” I asked Hinojosa.

“Do you think good access to the internet, good broadband, is an essential part of society?” I asked.

“That used to be luxury, not anymore. Yes, short answer, it is a necessity. Just like water, like electricity,” Hinojosa said.

Angela Siefer is the executive director of the National Digital Inclusion Alliance. She advocates for access to broadband well beyond schools.

“What is the pandemic teaching us about access to broadband?” I asked her.

“I think the pandemic is increasing awareness of the necessity of broadband in someone's home. The idea of going to a parking lot to many of us sounds ridiculous. It is what lots of families are doing right now,” she said.

She’s talking about sitting in the parking lot outside a library or business that has Wi-Fi, which was not uncommon last school year.

In a February report from Brookings about the "Digital Divide," Siefer argues broadband is "essential infrastructure." Yes, it's connecting kids to school. But more broadly it also connects people to work and job listings. It connects us to telemedicine and brings us closer to friends and family.

“We absolutely must have internet to function as a society,” she said.

But a connection can be expensive.

According to research from one professor at NYU, a broadband internet connection costs about $31 a month in France and $33 in Korea. In Germany and Japan, it can cost $35.

Internet speed is also an issue for low-income families, too.

In a 2016 report about the largest non-cable internet providers like AT&T and Verizon called "DSL Providers Save Their Fastest Internet for Wealthier Communities," The Center for Public Integrity found about 40 percent of customers in wealthy areas can get high speeds, but only 22 percent can in poorer areas.

AT&T says that report is out of date and "far from accurate." In South Dallas, it says, it's deployed more high-speed fiber per capita than the rest of the D-FW area. And 70 percent of homes there have access to fiber, as compared to 50 percent of the larger community.

Verizon says it has long been committed to building out its high-speed network in urban areas.

Dr. LaVelle Hendricks at Texas A&M Commerce has studied how a lack of reliable access to the internet can hurt students.

“Historically, have minority communities had less access to the internet?” I asked.

Advocates like Siefer say narrowing the Digital Divide will require a range of solutions. More providers competing for your business would lower costs. Government subsidies for families who cannot afford the connection or a computer to go with it and widespread digital literacy training would also help.

And here's a cool idea.

Dallas, Plano and Fort Worth ISDs, along with eight other school districts, have asked the federal government to allow individual schools to share their broadband signal beyond school boundaries. The idea is "to create neighborhood hotspots for students and parents to use 24x7."

Solving this problem will require creativity and capital.

The pandemic has shown us the internet is essential for work. And again, this year, a good broadband connection will be required for kids to go to school.

That makes the internet just as essential as power and water. And it's time we treat it that way.