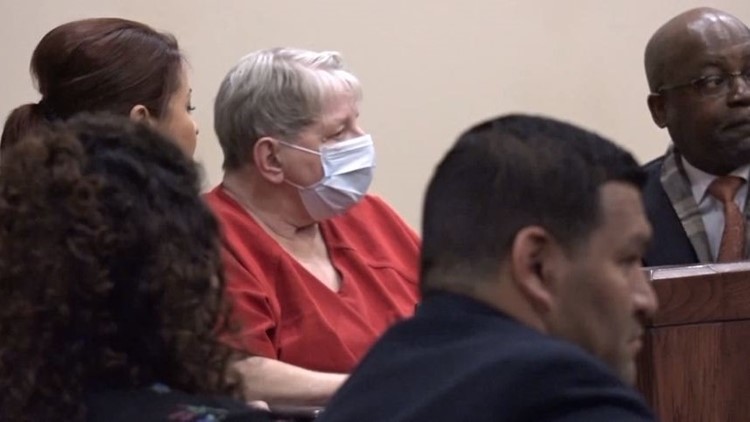 Genene Jones appeared in Bexar County court for her arraignment in Dec. 2017.

The prosecution said Jones' defense is arguing that prosecutors bringing the murder cases so long after they happened has "violated the due process rights of the defendant."
Author: Stacey Welsh
Published: 10:59 AM CDT April 16, 2018
Updated: 10:45 AM CDT April 17, 2018

SAN ANTONIO - Genene Jones is set to appear in court Wednesday as part of the murder charges that were brought against her in 2017.

Jones is being held in Bexar County to face five murder charges. As KENS 5 reported, she pleaded not guilty to all five of the children's deaths, which happened back when she was a licensed vocational nurse at Bexar County Hospital in the 1980s.

Listen to VILE Podcast on SoundCloud and download on iTunes. Also search "VILE" and subscribe through the Apple Podcast app.

KENS 5 spoke with Bexar County District Attorney Nico LaHood after Jones' arraignment in December. He said victims' families were made aware of the likelihood that she would plead not guilty.

"We prepared them for that. We expected this. In this process, it’s normal for most citizens accused at this stage in the process to have a position of not guilty. That could change as time goes on," LaHood said.

The DA's office said Jones was offered a plea deal. The terms of that offer were not released to the public.

"It's an offer that we believe is just, considering the children and families that have been involved. We spoke with the family members about it. They support our offer. They believe it is just also. We've made that offer, and we've given them a deadline," he said.

"If [the defense] accepts it, then it will be public knowledge. If it's not accepted, then we will be set for trial. We're prepared to try those cases today. They are separate cases, so there will be a trial on the first case, Joshua Sawyer. Regardless of the verdict, there will be a second case. Regardless of the verdict, there is a third case, then fourth and fifth. They are each separate cases," LaHood said.

He said these charges would be considered death penalty cases if they had happened recently.

I spoke with LaHood again in March, after the Jan. 31 deadline for Jones to accept the plea bargain had passed.

"Her attorney was given a deadline of when to accept a plea deal, and they did not respond to that offer of a plea deal. We're going to be ready for trial once the judge calls us to trial," he said.

LaHood said it's possible the prosecution could still consider a plea deal as the case moves forward.

"If we accept a plea offer and believe it is the right plea offer, considering all the evidence we have and the different five cases pending, then of course we will consider it at that time. As of now, we are moving forward toward a jury trial," LaHood said.

Jones is scheduled to appear in court after the DA's office said her defense filed a "motion for speedy trial" that applies to all five of the murder charges she faces.

In a statement, the prosecution said Jones' defense is arguing that prosecutors bringing the cases so long after they happened has "violated the due process rights of the defendant. In Texas, there is no statute of limitations for murder."

KENS 5 reached out to Jones’ defense team to talk more about the case and the motion, but did not receive a response.

Vile will be back with an update on the hearing. Go to KENS5.com for breaking developments on the Jones case.