Austin vs. San Antonio: Their similarities, differences and room to improve | Commerce Street

KENS 5 talked with professors in both cities about their similarities, differences, areas of growth and room for improvement. 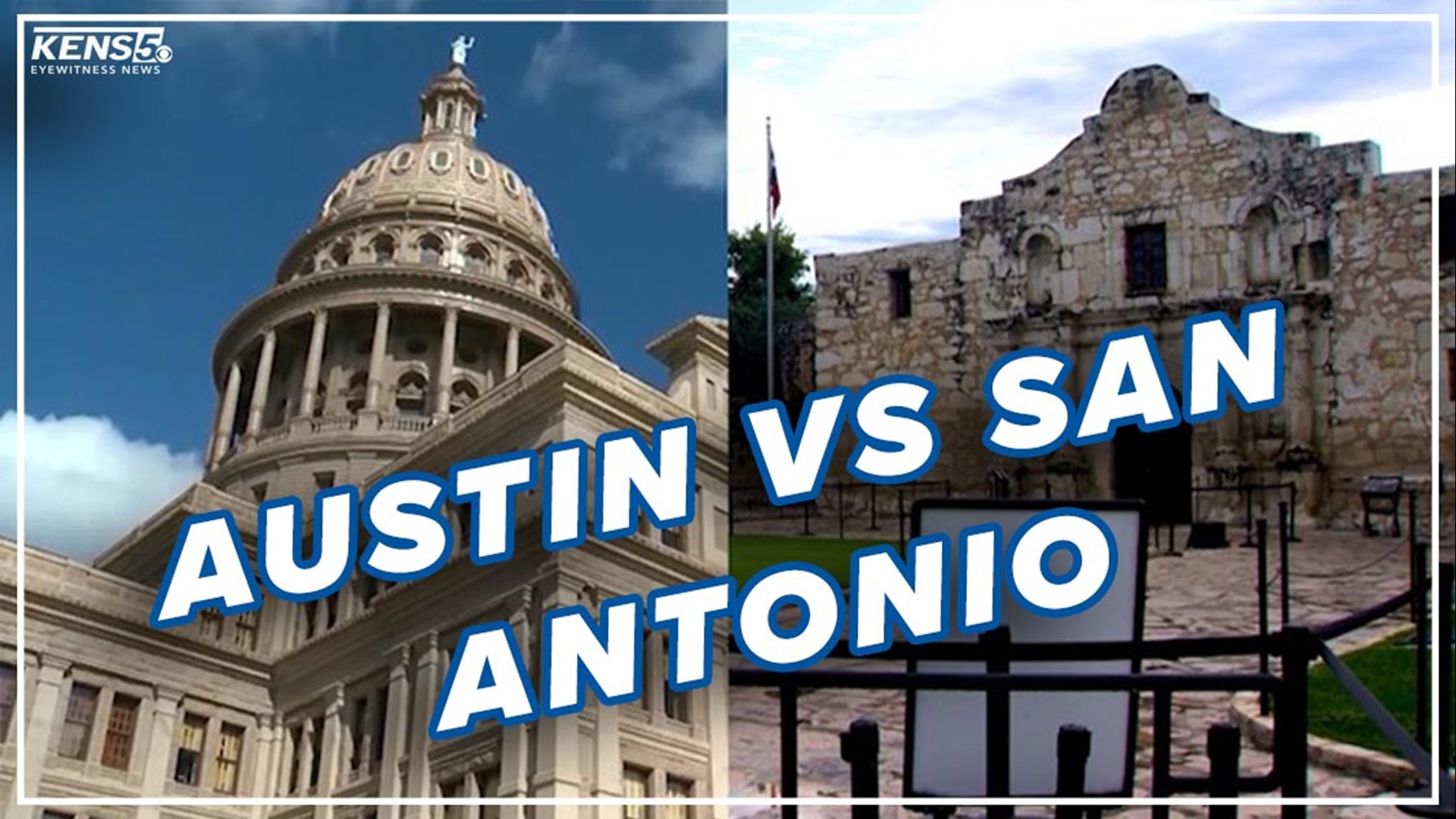 SAN ANTONIO — Austin has grabbed national headlines for flashy companies moving headquarters and operations to the city. Meanwhile, San Antonio has been growing its cybersecurity industry and working to increase the level of residents with higher education and advanced technical skillsets. KENS 5 spoke with professors in both cities to find out how they stack up next to each other-- and whether there's room for collaboration.

Listen to the full episode below, or download on Apple Podcasts, Google Podcasts or Spotify (article continues underneath):

Historically San Antonio has had a relatively low manufacturing sector relative to other metro areas and in the past decade or so we've seen it turn around. We have made some substantial gains in things like manufacturing. We've seen gains in things like cybersecurity- getting a lot of defense contracts that have been helping to build this industry out. We've always had the tried and true ones- tourism, military, healthcare services have been around for a while. Those have been relatively stable where more recently, some of these other industries like manufacturing that we struggled with for an extended period have started to come around and be a little bit more positive for the region.

How does that compare to what we're seeing in Austin?

I'd say more of the economic growth in San Antonio is from within the region, less of it coming from external places. Just for comparison, Austin does better than San Antonio in drawing in external companies into the region- but there are certainly instances in which we've been marginally successful in drawing in some of that outside interest. We have very high population growth rates and corresponding to that is a very strong city economy, but in aggregate we probably have more self-generated economic growth as opposed to external, with people moving in.

Can the cities build off of each other because of that?

Both cities are experiencing rapid economic growth. Economic and population growth. So just having more people in each, there's more opportunity for economic activity between them. People don't like to stay in the same area forever. We like to travel, we like to experience different locations, San Antonio folks go to Austin all the time, Austin folks go to San Antonio all the time, so there's a  really significant opportunity for tourism between the two.

Austin is a major innovation hub. We've seen a lot of investment in new innovative technologies. San Antonio has a very strong cybersecurity sector. There's a very strong possibility that as Austin innovation continues to develop, we could see them working with San Antonio cyber groups to help protect this new work that they're developing within this digital age- so we can really see a mutual benefit there.

We see a lot of projects coming into San Antonio through the military healthcare sector and that there is opportunity to overlap with Austin-based, UT-based researchers, I think that's a good chance for mutual feedback. And as for Austin and San Antonio, Austin is the biggest venture capital hub in Texas. More than 60% of all Texas venture capital is running through Austin-based firms, so having that money running through it really opens up opportunities for San Antonio innovators that are looking to open up and expand operations.

What other opportunities does San Antonio provide for Austin, and vice-versa?

There's an opportunity for Austin in particular to benefit from San Antonio's strategic location- San Antonio being a major international trade hub. Especially with our economic and social ties to Mexico, as Austin-based businesses are looking to expand to international territories, there's an opportunity to use San Antonio as the middle-man in that operation. A significant percentage of all goods that travel from the United States to Mexico are going through San Antonio. So our location as a trade hub really opens up opportunities for Austin to potentially expand their access to international consumers along the way.

The financial services sector in Austin is extremely strong. It's going to be something that allows San Antonio access to easy capital. The business environment in both are very favorable, so there are going to be instances in which Austin and San Antonio are competing with one another to try to bring in external companies- that's another area where Austin has been a little more successful than San Antonio has.

I am excited about the possibility both areas can help each other grow, but don't want to rule out the possibility, and one mild concern, is Austin being an area that has very high levels of capital and a very educated workforce- from the San Antonio perspective there's a concern they could act as an economic vortex for the area, kind of suck in a lot of the activity that we'd want to see here. As Austin continues to grow stronger and stronger, the hope is that continues to help San Antonio as well, but we can't rule out the possibility it won't be a barrier to new firms in the area

Anything else to add?

There's a big disparity in the extent to which higher education has reached these regions and that's kind of the main thing we're looking at. One of the reasons Austin is better at bringing in outside firms, as compared to San Antonio, is that high skilled labor force. So one of the things San Antonio needs to work on in the long run is building up our education services.

What benefits Austin and leads to it securing investment?

The access to a diversified talent pool. We have a very strong skilled labor force supported by a strong higher education system that's anchored by UT Austin. Having access to students in graduate school who are skilled in technology, business, engineering- these are all very attractive to businesses coming into the Austin area. Most of the economic growth has been coming from technology, financials, business services, and now that COVID seems to be getting slightly under control we're seeing a resurgence in leisure and economic activities.

How has that impacted both Austin and San Antonio?

Both the Austin and San Antonio economic regions have offered significant economic incentives for businesses that are looking to relocate to either metropolitan area, and there are both state and local incentives offered. As this progresses, investments in infrastructure are very important, as we're seeing roads, supporting businesses, healthcare, transportation systems- all of these offer a holistic benefit to businesses that are coming in. Also, having access to skilled labor is a challenge and being able to draw upon the resources of a University of Texas or Texas A&M, the community college system- those are very attractive to employers that are trying to pick a city.

Is it kind of exponential, in that one business coming attracts others?

In the same way we had here in Austin Apple, IBM, Dell, many of these companies have supported growth in the region and are attracting other businesses to build an ecosystem around it. So we are definitely seeing that happen; again, I would point to higher education as being a very important factor.

The infrastructure investment is a big part of that- so having access to transportation hubs, for example, both Austin Airport, San Antonio Airport, Port San Antonio- these are all an important part of how a business decides to move into an area. Having access to equipment, healthcare system, transportation, highway systems, improved roads- these things are big factors that go into a company's decision to relocate.

What benefits can San Antonio bring to the table on its own?

Cost of living has become a more and more important factor for businesses as they look to having good workforces that will stay stable over time. I think what's happened in the Austin's area is there's been such a demand it's exceeded the capacity for what Austin can offer. Austin is making efforts in trying to improve its infrastructure and expand its activities, but where we see a real benefit to San Antonians is that the cost of living is so substantially different. In many sectors it can be 20-30% less expensive to live in San Antonio versus in Austin.

Austin vs. San Antonio: Their similarities, differences and room to improve | Commerce Street