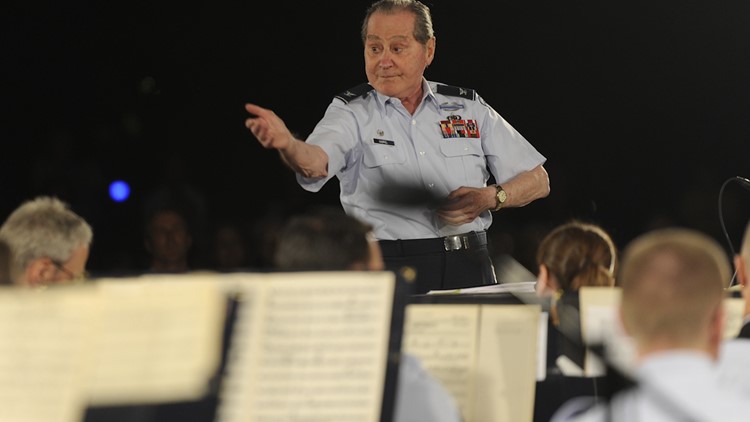 Photo by: US Air Force

Conducting at 94 | Colonel credits music for saving his life

Editor's note: After this piece was published online, Colonel Gabriel revealed that he did not participate in the Allied D-Day landings on June 6, 1944. Colonel Gabriel did serve over 200 days in combat with the Army’s 29th Infantry Division in France and Germany, and was awarded two Bronze Stars and the Combat Infantryman Badge.

When you step onto a United States Air Force base, you’re typically greeted by the roar of passing jets.

But on Bolling Air Force Base, the sound of flight is replaced with that of flutes.

The moment your ears tune into the flittering of said flutes, the deep rumble of percussion begins. Then trombones, clarinets and French horns. Soon, your entire body – from toes to chest – vibrates along with the music.

This is the home of The United States Air Force Band. Leading them in glorious synchronicity is 94-year-old Colonel Arnald Gabriel.

Born in New York in 1925, Gabriel is a first-generation American. His parents immigrated from Italy in hopes of pursuing the American dream. Rather than white picket fences, they found themselves in the worst economic downturn in the history of the industrialized world: The Great Depression.

“I can remember my older brother telling me, ‘When you were a child, mom and dad and you and I would have dinner with one can of beans,’” said Gabriel. “That’s how difficult things were.”

Gabriel dealt with the hardship of poverty through music. He hoped this passion could also help him serve his country. He auditioned and was selected for the elite Navy School of Music while in his senior year of high school.

But when he reported to the recruiting station, he was told his admittance to the Navy was invalid and he was going into the Army. The flute he once carried was replaced with a machine gun.

“I had broad shoulders, so they made me a machine-gunner. They figured I could carry a machine gun across Europe,” Gabriel said. “I later found out that the life expectancy of a machine gunner in combat is three days.”

At age 19, he was assigned to the 29th Infantry Division in 1944 and sent overseas on the Ile de France alongside thousands of other infantry troops.

Rather than being surrounded by the musical notes of the Navy band, Gabriel heard the cries of war.

Gabriel couldn’t shut out the horrors of what he witnessed forever. After serving for the remainder of the war, he returned to New York where he struggled with severe post-traumatic stress.

FROM BATTLES TO BANDS

After returning from war, Gabriel found work in a factory. He made 87-cents an hour and was deeply depressed.

On a spring day in August 1945, Gabriel’s former high school band director showed up questioning why he wasn’t putting his incredible musical talent to use.

Professor Stanley was adamant that Gabriel went to college. Stanley returned a week later, informing Gabriel he had enrolled him in Ithaca College. Stanley paid Gabriel’s admission fees and had his university band entrance audition waived.

“I needed something to shut out the war [and] my 16 hours of credit wasn’t enough,” said Gabriel.

While going to class, Gabriel began a job as a choir director at a church in his hometown of Cortland, New York. He then found two other positions in local bands as well as played in a dance band on weekends. He credits music for keeping him alive.

By attempting to shut out the war, Gabriel opened the door to destiny. He decided to pursue a position as a conductor in the United States Air Force band.

Over the next several decades, Gabriel traveled to 50 countries as well as all 50 U.S. states, conducting.

In his 80-plus years of playing music, Gabriel has played for popes, celebrities and the world’s elite. But he has always had a passion for ensuring music is accessible to all. That’s why when he became the Air Force Band Conductor, he helped waive any entrance fee, so all military band concerts were and are free.

Today, at age 94, Col. Gabriel continues to play and conduct music – and he’s not slowing down any time soon.

On the 75 anniversary of D-Day, Gabriel will lead a 1,000-member band. Chicago Philharmonic has also signed Gabriel under contract for his first concert at age 100.