Spurs GM Brian Wright: 'All of our guys are excited to get back in the gym and get going'

Wright told the media during a Zoom conference that the Spurs reopened their practice facility Monday. 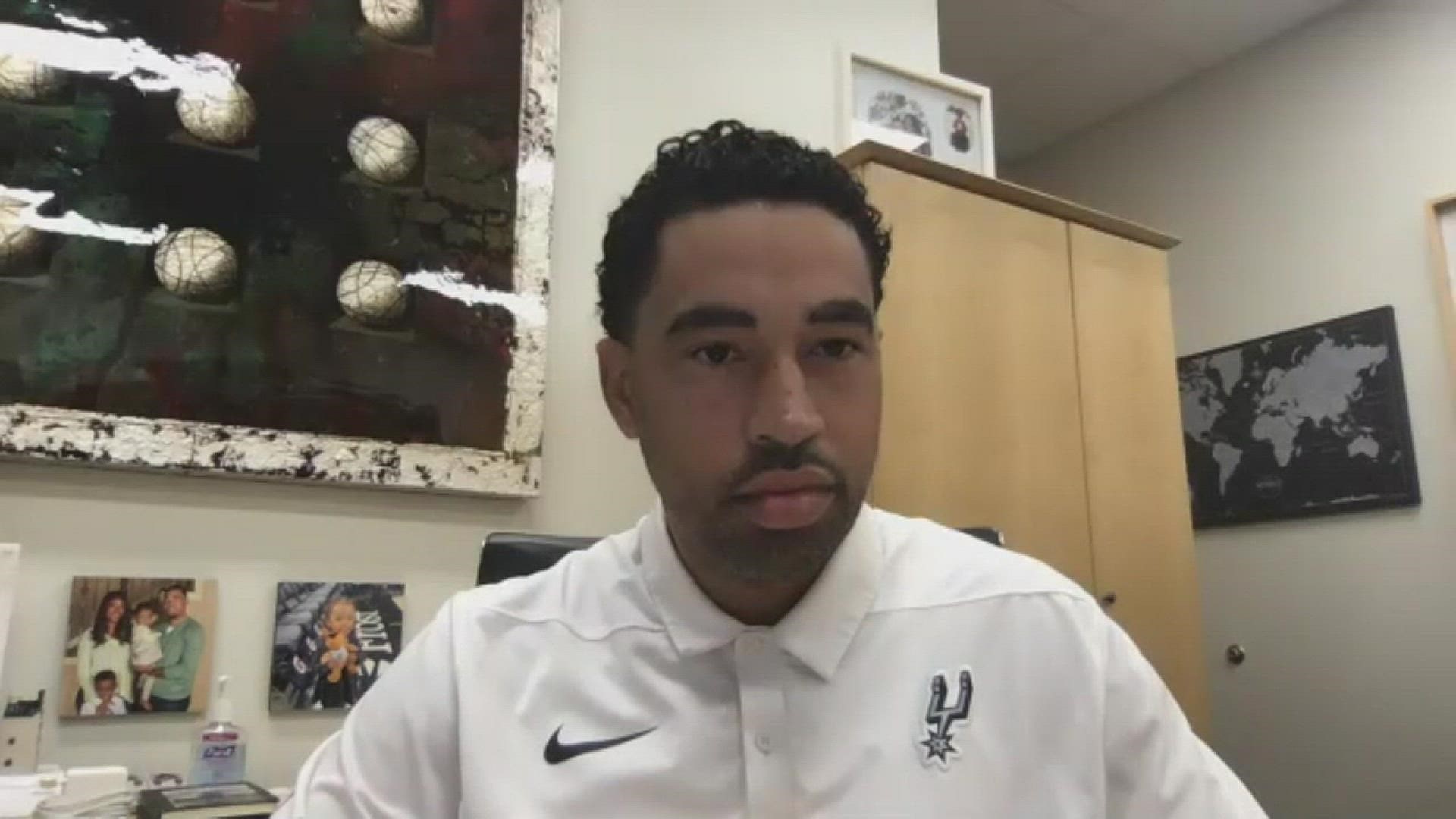 SAN ANTONIO — Their season suspended since March 11 after the outbreak of the coronavirus, the Spurs reopened their practice facility Monday for the start of individual workouts.

Brian Wright, the franchise’s general manager, reported the development in a Zoom conference with the media.

“The protocols for the workouts during this time period follow the guidelines from the league,” Wright said. “They kind of outline what that looks like. It’s a one-to-one ratio with a player and a coach. There are specific rules on PPE that coaches have to wear, whether it’s masks or gloves, certain distance in between players and coaches, certain time slots and how many people that you can have in the gym.

“We’re working through a time period right now where we only have two guys in the gym at a time. It’s very specific, very detailed, very thorough, so that we can minimize the impact if anything were to happen or spread. We could easily trace who was involved during that time period.”

While the bulk of the team has remained in San Antonio, there are still some players who haven’t returned to the city, Wright said.

The Spurs are among the 22 NBA teams that will resume the 2019-20 season in Orlando, Fla., next month. The league’s board of governors approved the 22-team format last Thursday, and targeted July 31 as the start date. All games will be played at the Walt Disney World Resort.

“It’s going to be a huge adjustment, obviously,” Wright said. “And to know that it will take, we won’t really know until we get in that bubble. We’ve all done Summer League for a couple of weeks, but we’ve never done anything quite like this.

"But I think what you’ll see is that when the ball is thrown up and guys get to playing and competing, you’ll see that same competitive nature come out with the players and coaches. Hopefully we can put a nice product out for everybody to enjoy playoff basketball. There will be an adjustment period, but I know the guys want to compete and crown a champion this season.”

Credit: Antonio Morano | Special to kens5.com
Forward DeMar DeRozan, shooting against the Dallas Mavericks, led the Spurs in scoring and assists before the season was suspended March 11.

The top 16 teams in the Eastern and Western conferences will be joined by teams currently within six games of eighth place in the two conferences – News Orleans, Portland, San Antonio, Sacramento, Phoenix and Washington.

“It’s a lot that has got to get done between now and then, but we look forward to getting out there and continue to compete and finish the season strong.”

All 22 teams will practice at their home facilities for about a week before going to Orlando and continuing to train there. Wright said the details of the workouts, including when they’ll start, are still being discussed by the league.

“Those are all things I wish I could give you definitive, firm answers on right now,” Wright said. “But again, it’s all conversations that are still being had currently at the league level. We’re still working with some things that could change, so I don’t want to speak out of turn.”

San Antonio (27-36) trailed the Memphis Grizzlies by four games for the eighth and final playoff spot in the Western Conference when the season was suspended March 11.

The Silver and Black were 12th in the West standings with 19 games left on their schedule, but trailed ninth-place Portland by only a half-game in the ultra-competitive West.

All teams will play eight games as well as a play-in tournament to determine the eighth seeds in both conferences.

At least for the time being, the Spurs’ league record-tying playoff streak is still active.

The Silver and Black started their run of 22 consecutive playoff seasons in Tim Duncan’s rookie year. The Philadelphia 76ers began their streak in 1950, when the franchise played in Syracuse and was called the Nationals. The team moved to Philadelphia in 1964.

The Spurs haven’t missed the playoffs since 1996-97 season, when Duncan was a senior at Wake Forest. San Antonio selected Duncan with the No. 1 overall pick in the 1997 NBA Draft, and went on to win five championships in 16 seasons.

Minutes before the Zoom meeting, the Spurs reported that veteran power forward LaMarcus Aldridge will miss the remainder of the season after having surgery on his right shoulder in April.

The Spurs said Aldridge sustained the injury Feb. 21 against the Utah Jazz. He played the following game against Oklahoma City, but sat out the next six games to rehab the injury. Aldridge returned against Dallas on March 10, but the NBA Commissioner Adam Silver suspended play the next day.

“We tried to take advantage of the hiatus period with rehab and him working to get back,” Wright said. “Unfortunately, it just didn’t progress the way we all had hoped and the best pathway from there was the surgical procedure. So we decided to move forward with that and get him ready for next season.”