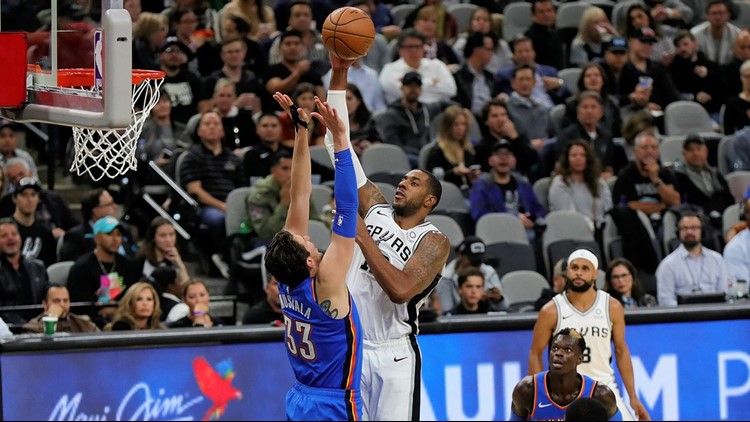 Photo by: Photo by Antonio Morano bit.ly/XR79FT / Special to KENS5.com
Spurs power forward LaMarcus Aldridge scored 39 points on 19-of-23 shooting in a 121-112 victory against the Thunder on Nov. 7 at the AT&T Center.

SPURS GAMEDAY: Win over OKC would give S.A. three straight wins for only second time this season

Notable: After playing the Thunder, the Silver and Black end the week Saturday with a road game against the Milwaukee Bucks. Milwaukee (31-5) has the best record in the league and leads the East Conference . . . No. 7 OKC leads No. 8 San Antonio by 3.5 games in the Western Conference standings . . . The Spurs ended the year below .500 for the first time since 1996. San Antonio wound up in the NBA lottery after finishing the 1996-97 season 20-62, and selected Tim Duncan with the No. 1 overall pick.

Times have been so lean for the Spurs this season that they have yet to win more than three consecutive games. That's quite a comedown for a franchise that won 13 straight and went 67-15 just four years ago.

The Silver and Black jumped out to a 3-0 start at home this season, but that's the only time they've won three in a row.

The Spurs (14-18) will have a chance to match their longest win "streak" of the campaign Thursday night when they host the Oklahoma City Thunder (18-15), who have won three straight and seven of their last eight.

No. 7 OKC leads No. 8 San Antonio by 3.5 games in the Western Conference standings. The Spurs beat the Thunder 121-112 in their first meeting of the season on Nov. 7 at the AT&T Center.

Spurs power forward LaMarcus Aldridge went off that night, scoring 39 points on 19-of-23 shooting. He made 10 straight field-goal attempts at one stretch.

Spurs point guard Dejounte Murray almost had a triple-double in a 121-112 victory against Oklahoma City on Nov. 7 at the AT&T Center.
Photo by Antonio Morano bit.ly/XR79FT / Special to KENS5.com

Point guard Dejounte Murray also had a stellar game, finishing with a career-high 10 assists. He also had 17 points and eight rebounds. The Spurs finished with a season-high 32 assists.

The Thunder have brought out the best in Aldridge since he joined the Spurs in the summer of 2015. He has scored at least 38 points in four of the 12 games he's played against OKC, including the playoffs. Aldridge had a career-high 56 points in a Spurs victory over the Thunder last Jan. 10.

Aldridge, who is averaging 19.4 points and 7.7 rebounds and shooting 51.3 percent this season, has worked to expand his offensive game. He nailed a career-best five three pointers and finished with 25 points in a 136-109 rout of Detroit on Saturday.