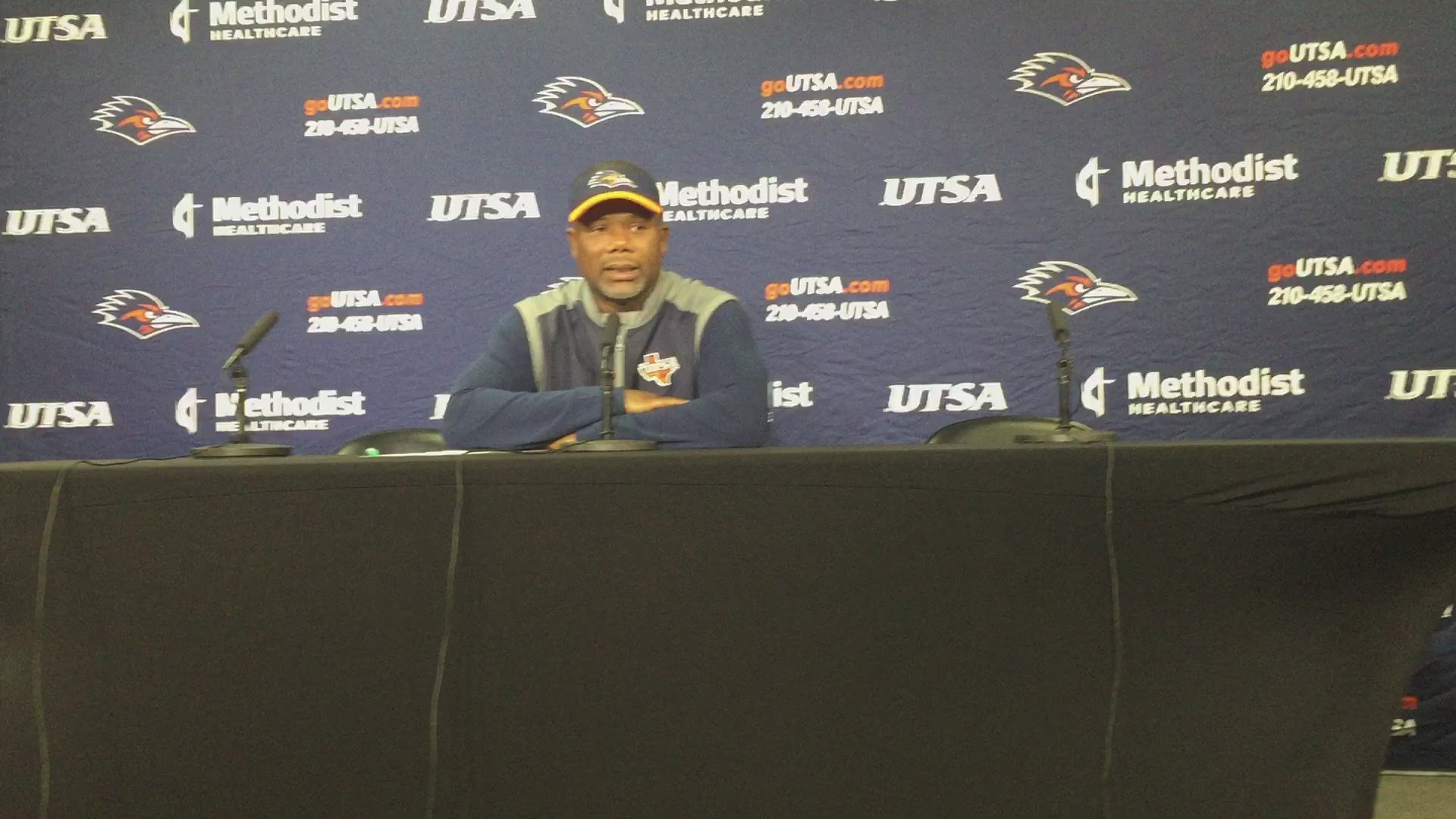 SAN ANTONIO — The 100th game in the short history of the UTSA football program will not be remembered fondly by the Roadrunners and their fans.

UTSA entered Saturday's Conference USA game against UAB with an opportunity to hit the .500 mark for the first time this season, but it was the Blazers who walked off the field as victors.

Tyler Johnston III completed 17 of 26 passes for 294 yards and two touchdowns and Nick Vogel kicked four field goals, keying UAB's 33-14 win before a crowd of 15,728 at the Alamodome.

The attendance was the lowest for a UTSA home game since the Roadrunners started playing football in 2011. .

The Roadrunners trailed by three points twice and two points once before they fell behind by nine, 23-14, with six minutes left in the third quarter.

UTSA coach Frank Wilson said the turning point of the game was the Roadrunners' failure to convert a fourth-and-1 at the Blazers 6 late in the third quarter. UTSA was down 23-14 when tailback Sincere McCormick was thrown for a three-yard loss.

UAB took over on downs and drove to the Roadrunners' 25 before settling on a 43-yard field goal by Nick Vogel with 11:01 remaining.

Credit: Photo by Antonio Morano bit.ly/XR79FT / Special to KENS5.com
UTSA sophomore quarterback Lowell Narcisse led the Roadrunners in rushing with 89 yards on 17 carries in Saturday's 33-14 loss to UAB on Saturday at the Alamodome.

"I think when it was a nine-point game we get an opportunity to go for it, to still pick up a first down inside of the five-yard line," Wilson said. "So we have a fourth-and-one to get a first down. And then we have four shots to get it into the end zone.

"We had struggled to go the distance and so we wanted to be aggressive and try to get one to give us four more opportunities, and knowing that we were playing at that time solid defensively and they still would have to go 96 to score."

But McCormick never had a chance when he took a toss from quarterback Lowell Narcisse, who started his second game in place of injured Frank Harris.

"We didn't get one and they went 96," Wilson said. "And that's not how we saw that happening. So I think that was the turning point in the game that kind of broke the game open at that time."

UAB drove to the UTSA 25 before settling for a 43-yard field goal by Nick Vogel, putting the Blazers up 26-14 with 11:01 remaining. The Blazers went ahead 33-14 on a five-yard run by Lucious Stanley and extra-point kick by Vogel with 5:20 remaining.

"We are still learning how to win, how to finish, and we'll continue to work diligently to get it figured out."

The Roadrunners host winless Rice, which had a bye this week, in their homecoming next Saturday.

"We don't have much time to let this one linger," Wilson said. "We'll put it behind us immediately, so that we can prepare to play a quality team that's had two weeks of preparation for us."

Credit: Photo by Antonio Morano bit.ly/XR79FT / Special to KENS5.com
The UAB defense held UTSA to 220 yards of total offense in the Blazers' 33-14 victory in Conference USA play Saturday at the Alamodome.

UTSA senior safety Carl Austin III said the game was the Roadrunners' to win, but "silly mistakes" doomed their chances.

"But we're going to be all right," Austin said. "We're going to go back to the drawing board and go even harder this seek for homecoming next week."

The Blazers outgained the Roadrunners 492-220 in total offense, finishing with 198 rushing yards on 41 attempts and 294 passing yards. UTSA finished with 126 yards rushing and 94 passing.

McCormick, named C-USA Offensive Player of the Week after rushing for 189 yards in last Saturday's win over UTEP, was held to 34 yards on 16 carries. He scored the Roadrunners' first TD on a 4-yard run that cut UAB's lead to 10-7 with 12:02 left in the second quarter.

Narcisse completed 8 of 19 passes for 94 yards, and led UTSA in rushing with 89 yards on 17 carries.

Trailing 16-7 at the half, the Roadrunners drew to within two on Narcisse's 4-yard TD run with 8:57 left in the third quarter. His score capped an eight-play, 50-yard drive. Hunter Duplessis kicked the extra point to make it 16-14.

UAB stretched the lead to 23-14 on its next possession when Johnston threw a 25-yard scoring strike to Myron Mitchell. The score ended a six-play, 73-yard drive. 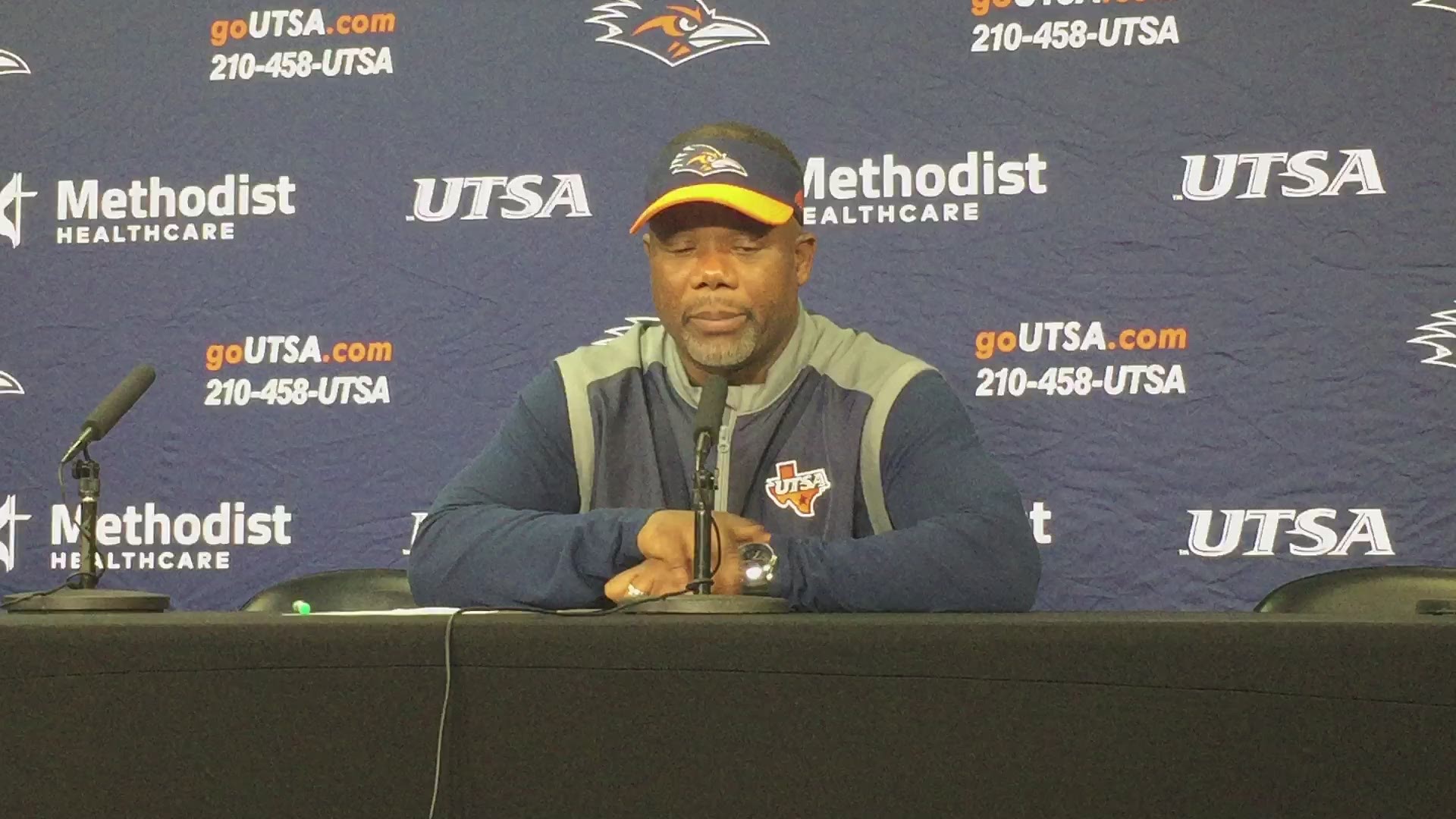 The Roadrunners squandered an opportunity to score after an interception and three-yard return by defensive end Jarrod Carter-McLin put them in business at the Blazers' 27.

UTSA moved to the 6 in five plays before McCormick was thrown for the three-yard loss that sealed the Roadrunners' fate.

UAB went up 10-0 on a 67-yard pass from Johnston III to wide receiver Austin Watkins 59 seconds into the second period. Vogel kicked the extra point.

The Roadrunners pulled to within three on the ensuing possession, carving out a six-play, 74-yard drive that ended with McCormick's 4-yard TD run. Vogel kicked his second field goal with 5:38 remaining and his third with only 13 seconds left before the break.

The Roadrunners had 74 yards rushing on 21 attempts and passed for 55 yards in the first half.