Roadrunners are now 3-4 overall and 2-2 in conference play. 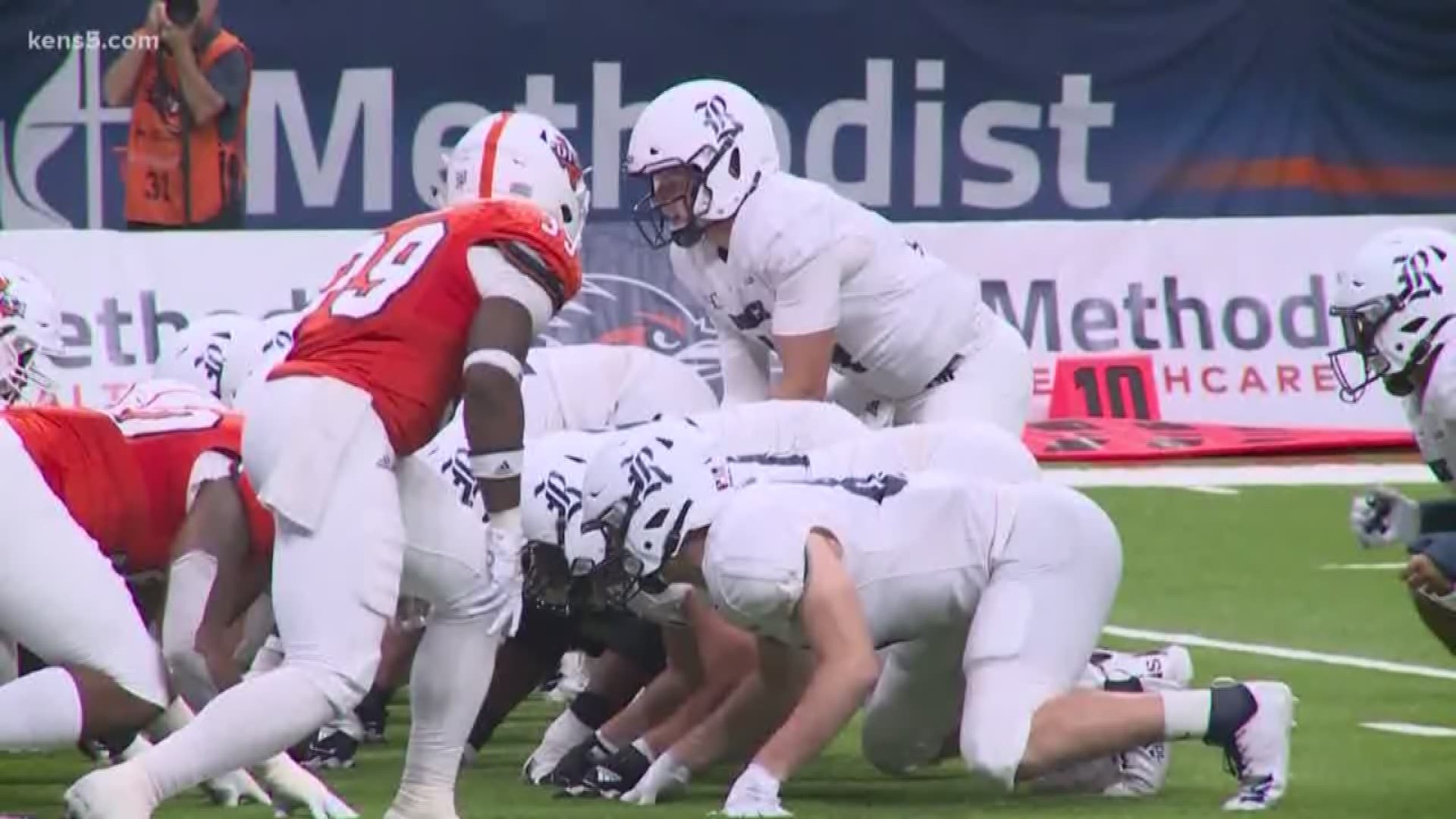 SAN ANTONIO — Sooner or later, Rice is going to win a football game again. Fortunately for UTSA, the Owls will have to wait at least another week to break into the victory column.

The Roadrunners got a much-needed win and continued Rice's misery this season, coming from behind to beat the Owls 31-27 in a Conference USA game Saturday at the Alamodome.

The Roadrunners won the game on an 8-yard pass from Lowell Narcisse to freshman Zakhari Franklin with 5:06 left.

"I'm just so excited for our football team, happy for a group of young men that treaded the tides, the turbulence of the water," UTSA coach Frank Wilson said. "They found a way. They practiced hard. They stayed together. They came together. And today they earned a victory.

"So proud of our football team. The locker room was full of excitement, with emotions, because they came together and they found a way on this day to earn a victory."

Rice drove to the UTSA 24 on its last possession, but quarterback Tom Stewart was dropped for a 14-yard loss on third down by defensive end DeQuarius Henry. The ball went over on downs after Stewart got only four yards as he tried to evade the Roadrunners' fierce pass rush on the next play.

"We prepare for those plays and those drives all the time," senior safety Carl Austin III said. "The coaches put us in the right spots to make plays, and we made those plays today.

Narcisse's TD pass to Franklin capped a nine-play, 79-yard drive that took 3:56 off the clock. Narcisse and Franklin connected for another 8-yard TD to give the Roadrunners a 7-3 lead with 59 seconds left in the first quarter.

Starting his third game since Frank Harris sustained a season-ending injury, Narcisse completed 19 of 29 passes for 212 yards and the two TD strikes to Franklin. He had one attempt intercepted.

"I thought the game slowed down for Lowell Narcisse, especially with that last drive," Wilson said. "He was near-flawless in throw-and-run check, and outstanding to leap over a young man to position us to go for seven, for six, and not settle for three at that time and tie the score."

Wilson was referring to a 14-yard run by Narcisse that put the ball at the Rice 3 late in the third quarter. Freshman tailback Sincere McCormick, a Judson graduate, was stuffed for a 3-yard loss on first-and-goal, but scored a 6-yard TD on the next play.

Another freshman from Judson, safety Rashad Wisdom, returned an interception 34 yards for a TD that put the Roadrunners ahead 13-10 on the first play of the second half

The victory was the fifth in a row for UTSA against Rice, which won the first three games of the series.

"We've been working for this, man," said Narcisse, a sophomore who transferred to UTSA from Mississippi Gulf Coast Community College in January. "The last couple of weeks, you watch the games, we weren't far from having a breakout performance, and we just kept believing.

Credit: Photo by Antonio Morano bit.ly/XR79FT / Special to KENS5.com
UTSA quarterback Lowell Narcisse, hurdling a Rice defender on a 14-yard run that set up a TD late in the third quarter, completed 19 of 29 passes, with one interception, for 212 yards and two TDs.

Total offensive yardage by both teams was nearly even, with the Owls outgaining the Roadrunners 369-361. UTSA finished with 149 yards rushing (Rice had 146) and 212 passing.

McCormick led the Roadrunners' ground game with 94 yards on 14 carries and the 6-yard TD. Carlos Strickland led the receivers with six catches for 86 yards.

With the score tied at 24 heading into the fourth quarter, Chris Barnes kicked a 37-yard field goal to give Rice the lead with 9:02 left. Barnes' kick ended a 13-play, 56-yard drive that consumed 6:47.

The Roadrunners stormed back on their ensuing possession, putting together a six-play, 75-yard drive that was culminated by McCormick's 6-yard TD run. Duplessis' extra-point kick tied the game at 24 with 49 seconds remaining in the third quarter.

Down 10-7 at the half, UTSA went up 13-10 on the first snap of the third quarter when Wisdom picked off a pass by Wiley Green and scored on his 34-yard return.

Credit: Photo by Antonio Morano bit.ly/XR79FT / Special to KENS5.com
UTSA freshman safety Rashad Wisdom picked off a pass by Rice's Wiley Green on the first play of the third quarter and returned the interception 34 yards for a TD in the Roadrunners' 31-27 win Saturday.

Duplessis converted the extra-point kick, but the Roadrunners were penalized for holding. After a bad snap, holder Lucas Dean wound up throwing a pass on the next attempt that was intercepted by Andrew Bird.

Rice responded on its next possession, scoring on a 19-yard pass from Stewart to Brad Rozner that capped a four-play, 75-yard drive. Barnes added the extra point to give the Owls a 17-13 lead.

UTSA answered Rice's TD with a 34-yard field goal by Duplessis on its next possession, cutting the lead to 17-16 with 8:58 left in the third quarter.

Rice took a 10-7 lead at the half on a 2-yard pass from Green to wide receiver August Pitre III, who beat cornerback Cassius Grady just inside the right sideline, with only 16 seconds left in the second period. Pitre's TD reception capped a seven-play, 78-yard drive that consumed 3:49.

UTSA took a 7-3 lead when Narcisse connected with Franklin for the 8-yard TD in the final minute of the first quarter. Duplessis added the extra point.  Narcisse's scoring strike ended a 13-play, 60-yard march that took 5:04 off the clock.

The Owls missed an opportunity to go up 10-7 earlier in the second quarter, when Naeem Smith intercepted a pass by Narcisse at the UTSA 2 and returned it to the 1. Smith picked off the pass after the ball bounced off the hands of tailback Brenden Brady.

After Walter was held for no gain on first down, Jaylon Haynes recovered a fumble by Green at the 1 on the next play to thwart the scoring opportunity.

Rice opened the scoring on a 31-yard field goal by Barnes with 6:03 left in the first quarter.

The Roadrunners, who haven't won consecutive games since the first half of last season, have an open date next week and return to action at Texas A&M on Nov. 2.

RELATED: UTSA GAMEDAY | Roadrunners can climb to .500 in C-USA with win against winless Rice

RELATED: With Harris out for season, UTSA starting QB job is Narcisse's to lose