The Roadrunners racked up 499 yards of offense for the first time since 2017 in the gridiron battle. 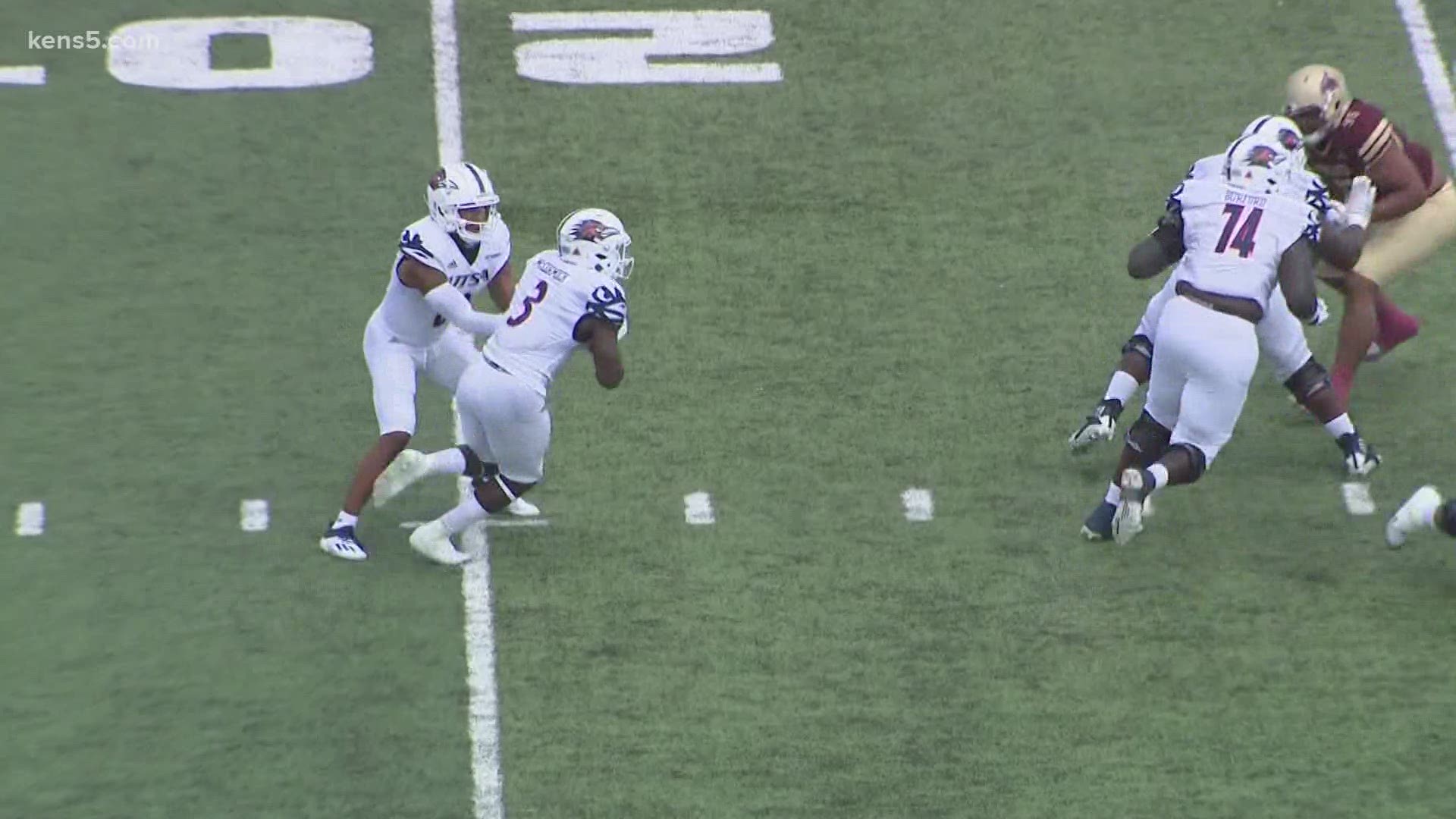 SAN MARCOS, Texas — Sincere McCormick rushed for a school-record 197 yards and Hunter Duplessis drilled a 29-yard field goal in the second overtime to lift UTSA to a 51-48 road win over Texas State, keeping the Roadrunners perfect all-time against the Bobcats on a steamy Saturday afternoon at Bobcat Stadium.

McCormick’s record day and Duplessis’ 12th consecutive made field goal dating back to last season helped seal a victorious debut for first-year head coach Jeff Traylor and sent the Bobcats to their second straight loss to open the 2020 campaign.

Duplessis, a senior from San Antonio Cole High School, split the uprights on his third kick of the day to help the Roadrunners put an end to a wild contest in the fourth meeting on the gridiron between the I-35 rivals. The Roadrunners built a 24-7 halftime lead only to see the Bobcats claw back to knot the score on a 91-yard punt return by Jeremiah Haydel with 1:16 left to play in regulation. Texas State had a chance to grab the lead but Alan Orona’s extra point sailed wide.

Pinned deep into its own territory following the ensuing kickoff, UTSA chose to run out the clock and send the game to overtime, the fifth OT game in school history and the first since a five-overtime setback to UTEP in 2016.

The Roadrunners scored on their first possession when sophomore wide receiver Joshua Cephus made a diving one-handed grab in the end zone with a defender draped all over him. Duplessis’ extra point put the visitors up 48-41.

The Bobcats answered on a 4-yard TD pass from Tyler Vitt to Marcell Barbee and Orona’s PAT knotted the score once again.

UTSA took advantage of the miss, as three straight rushes by McCormick set up Duplessis for the game-winning field goal.

McCormick carried 29 times and reached the end zone once in breaking his own record of 189 yards set in the victory at UTEP last fall. The sophomore from Converse Judson paced a rushing attack that piled up 330 yards, the third-best total in program annals.

Making his fifth career start at quarterback, Frank Harris completed 23 of 31 passes for 169 yards and a TD and he also rushed for 51 yards and a school record-tying three scores to help lead the offense to a 499-yard output, the most since a school-record 569 in the 2017 victory over the Bobcats.

Meanwhile, Rashad Wisdom registered a career-high-tying 10 tackles, including 1.5 stops behind the line of scrimmage, and picked off a Vitt pass and returned it 81 yards for a touchdown, giving UTSA a 41-28 lead with 3:24 remaining. That marked the second pick-six for the sophomore safety from Converse Judson.

Texas State got on the board first on a 66-yard catch and run by Brock Sturges on the game’s opening possession.

The Roadrunners responded quickly after a 58-yard dash up the middle by McCormick — one of two career-long 58-yard runs on the day for the 2019 Conference USA Freshman of the year — and a 17-yard jaunt around left end by Harris to paydirt.

UTSA took a 17-point lead into the locker room after a Duplessis 27-yard field goal, a 19-yard TD run by Harris and a 5-yard touchdown rush by McCormick.

Texas State closed the deficit to three early in the fourth quarter after a short scoring run by Sturges, who led the Bobcats with 69 yards on the ground.

Duplessis connected from 42 yards out and Wisdom’s interception return pushed the lead to 13, only to see Texas State strike twice in the final minutes on a 20-yard TD reception by Barbee and Haydel’s punt return.

Vitt finished with 346 yards through the air on 26 of 40 passing, helping the Bobcats tally 472 yards of offense.

The Roadrunners will open their home schedule next Saturday, Sept. 19, against Stephen F. Austin. Kickoff is set for 2 p.m. at the Alamodome and the game will air on ESPN3 or ESPN+.