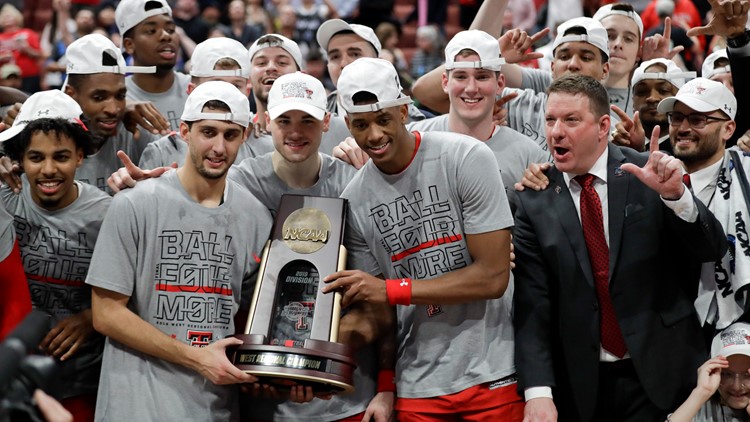 DALLAS — Texas Tech ended a drought of their own Saturday night, clinching its first trip to the Final Four in program history.

The Red Raiders also ended a drought for the state of Texas: Not since the Texas Longhorns in 2003 had a men's team from the Lone Star State reached the Final Four.

Texas that season was led by All-American point guard T.J. Ford, who also earned the Naismith Player of the Year award.

A few other names from that Final Four might ring a bell – and put into perspective just how long ago it's been since a Texas team made it that far.

Dwyane Wade, now 37 and in his final NBA season, led Marquette to the Final Four, before the Golden Eagles lost to Kansas.

On that Kansas squad? Nick Collison, who's now 38 and in his first year of retirement from the NBA.

Kansas' coach in 2003 was still Roy Williams, who hadn't yet won a national championship. The following season, Williams took the job at North Carolina, where the Tar Heels have since won three titles.

And, in probably the most memorable performance from that tournament, a freshman named Carmelo Anthony led Syracuse to a win over Texas in the national semifinal, and then a victory over Kansas in the championship game.

Anthony hasn't officially retired, but he was last in the league in January, when the Rockets traded him to the Bulls, who then waived the 17-year veteran.

Outside of that Final Four, LeBron James was a senior in high school, George W. Bush was still in his first term as president and the New England Patriots only had one Super Bowl.

So yeah, it's been a while since we've seen a Texas team on college basketball's biggest stage.