The Bobcats hung tough with SMU, but Shane Buechele and the Mustangs escaped San Marcos with a week-one win. 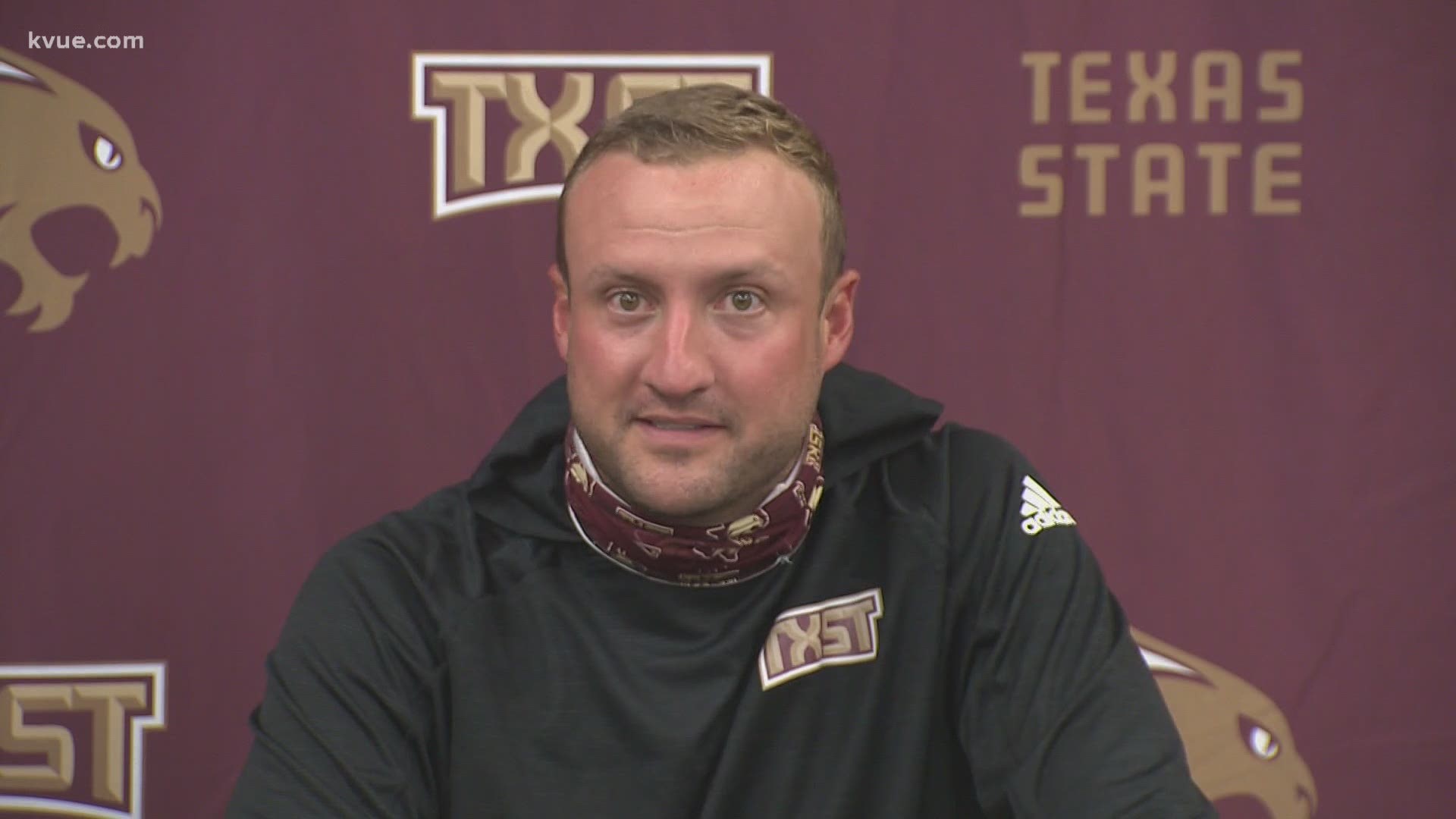 SAN MARCOS, Texas — Nothing about Saturday felt normal, and we almost got a result that wasn't normal to go right along with it.

In the end, though, Southern Methodist University was too much for Texas State and left San Marcos with a 31-24 win.

The Bobcats, however, were able to learn some valuable lessons going forward. They learned this year won't be anything like last year – something that's true for both their play on the field and the entire game-day experience.

“It still doesn’t feel like a normal game day," head coach Jake Spavital said post-game. "When you pulled up and there was nobody in the parking lot – everything’s great, you’re at the hotel, you’re locking the kids in, there’s good meetings, there’s a good vibe, you get on the bus and pull up and it’s just crickets.”

Even though they were expecting it, the sight of a socially distanced college football crowd was surprising to coaches and players, perhaps just as surprising was SMU not being able to distance itself from Texas State.

"It for sure stings because you always want to win as a competitor," Bobcats quarterback Brady McBride said. "But it also shows a lot of optimism in this program that we’re not just going to get run over. We’re going to fight and play."

In the first start of his Texas State career, McBride went 21/39 for 227 yards and threw for two touchdowns. One of them was to Jeremiah Haydel and is an early candidate for Catch of the Year.

Incredible one-handed snag from Texas State's @JHaydelll3 to tie things up at 14 heading into the second half.@KVUE pic.twitter.com/JZEVkPJC0j

Running back Calvin Hill turned his 13 carries into 100 yards, and Brock Sturges nearly joined him at the century mark, rushing for 95 yards on his 14 carries.

Former Texas quarterback Shane Buechele found his stride in the second half and threw for 367 yards, but the Bobcats' defense also picked him off twice and played well enough to keep them within striking distance.

“We’re a lot better than we were last year," Spavital said. "We’ve got to see the maturity of our team. There’s a lot of moving parts and obstacles this year. We’ve got to continue to do the right stuff with COVID.”

My man @coacharchiemac has that Texas State defense READY!

The bobcats are shutting-out SMU through one quarter. Those LBs—Simone Tupou and Brayden Stringer—really stick out.

For Texas State, it was a learning experience in more ways than one.

“Those kids were fired up just to play, man. A lot of this is about creating your own energy and pure love of the game. I don’t think it’ll ever feel like a true game day. I’ve been growing up in locker rooms my whole life and that was kind of unique today, but we got to call plays and run around and we had some fun with it," Spavital said.

Memoir: Michael Cohen claims Trump guilty of what landed himself in prison