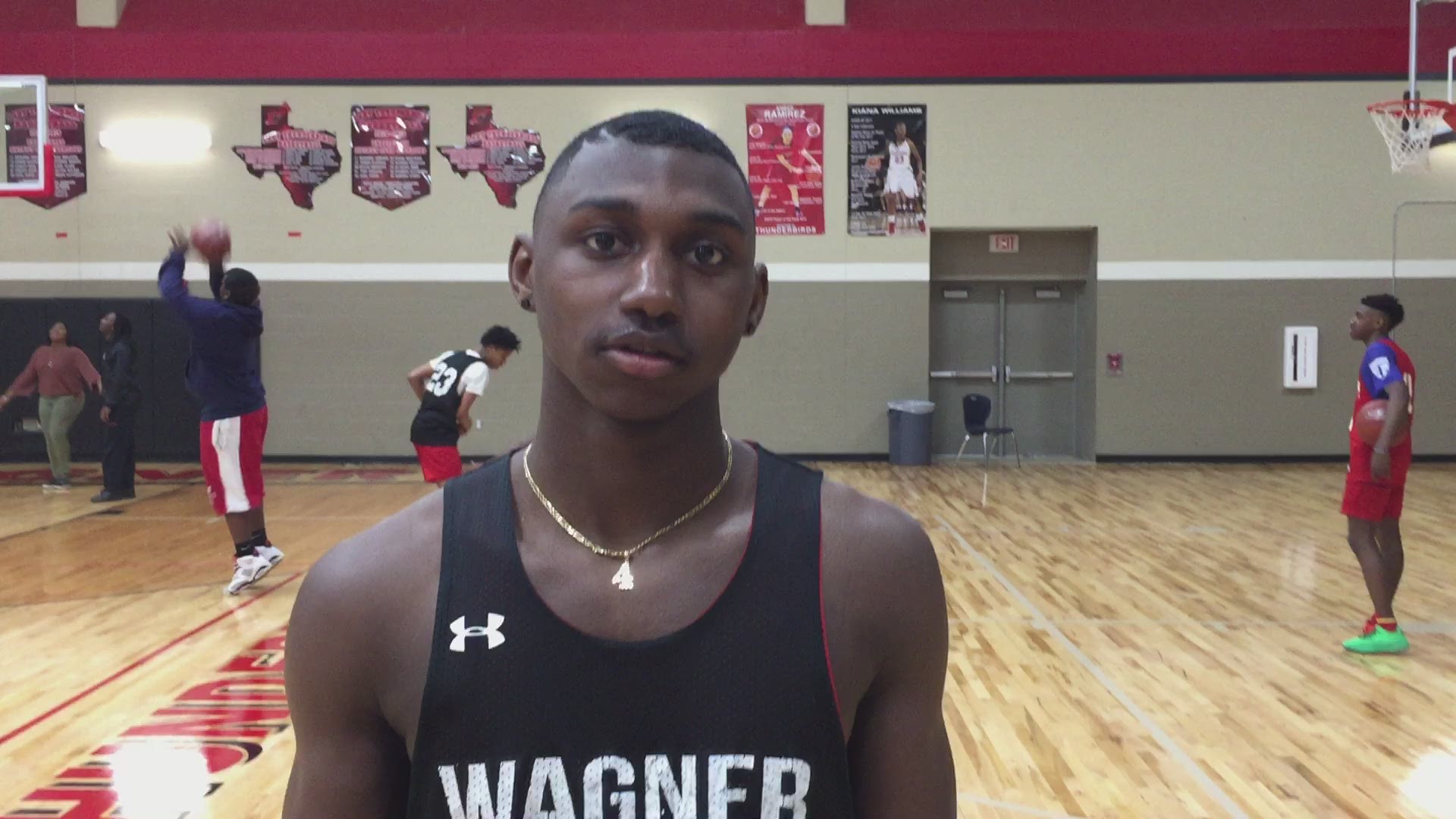 (Pairings for the other 6A, 5A, and 3A semifinals are at bottom of the story.)

SAN ANTONIO – The Wagner-Sulphur Springs matchup in the UIL boys basketball Class 5A state semifinals Thursday night will feature a clash of teams with contrasting styles.

While Sulphur Springs prefers to wear down opponents with a deliberate half-court game, Wagner likes to push the pace on both ends of the court. The team that sets the tempo likely will prevail.

“Sulphur Springs has a very good team,” Wagner junior guard Journee Phillips said this week after a workout. “They’re long and athletic. We’ve seen from watching film that they don’t like to push the tempo, so we’re going to pressure them with our defense and try to get them out of their comfort zone and cause turnovers.”

Wagner and Sulphur Springs meet in the last game of the first day of the University Interscholastic state tournament, which continues Friday at the Alamodome and ends with the 6A championship game Saturday night.

The Wagner-Sulphur Springs winner meets the Mansfield Timberview-Manor survivor for the 5A title Saturday at 3 p.m.

Two other schools from the San Antonio area, Steele and Cole, also advanced to the state tournament. Cole plays Dallas Madison in the 3A semifinals at 3 p.m. Thursday, and Steele meets Klein Forest in the 6A semifinals Friday at 8:30 p.m.

Wagner (32-5) earned its fourth berth in the state tournament with a 98-45 blowout of Corpus Christi Miller in the Region IV-5A title game Saturday. The Thunderbirds have won 18 consecutive games since losing to Denton Guyer in the Whataburger Classic Dec. 28 in Haltom City. 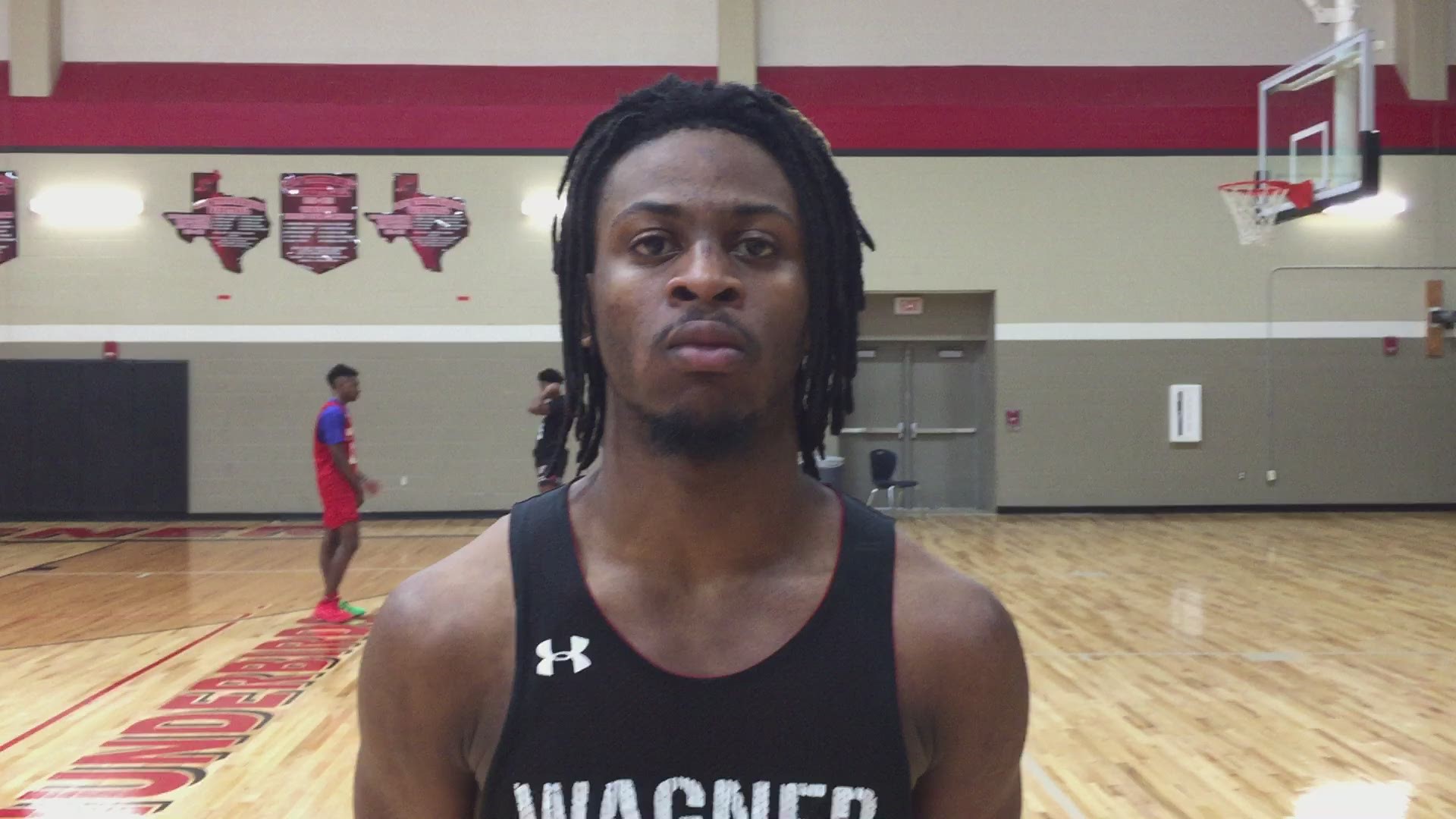 “At the beginning of the year, we started off slow,” Wagner coach Rodney Clark said. “We didn’t have that much experience. We had two guys that had played varsity. By the time we got to the South San tournament (Nov. 29), I think that’s when the turnaround came. That’s when they figured that, hey, we can be pretty good. They just got a little bit hungrier every game since then.”

Wagner, which dropped to 5A at the start of the current school year with the UIL’s biennial realignment, lost to Cypress Falls 63-57 in the 6A championship game in 2017. The Thunderbirds fell in the semifinals in 2009 and 2010.

Senior point guard Jalen Jackson and junior guard Journee Phillips played on the 2017 team that reached the championship game. Jackson, who has signed with North Texas, was a sophomore then and has started at point guard since his freshman season. Phillips saw considerable playing time as a freshman on the 2016-17 team and started in the state tournament.

Clark has relied on Jackson and Phillips to share their experiences of playing in the state tournament with their teammates.

“I’ve just told them they have to stay level-headed,” Jackson said. “It’s a different atmosphere at the Alamodome from other gyms we’ve been playing in. The depth perception is different, but the most important thing is we’ve just got to key in and play our game.

Credit: David Flores / KENS5.com
Rodney Clark is 174-68 at Wagner and has led the Thunderbirds to the state tournament twice since succeeding Cliff Ellis as head coach in 2012.

“It’s not a question of what he does well,” Jackson said. “The question is what does he not do well? He can guard every position because he’s strong and athletic. His basketball IQ is off the charts.

"He’s a leader. He’s a winner. He pushes us. Some games when we’re kind of struggling, he pushes us to win. Like I said, the question is what can he not do?”

Clark also had good things to say about Phillips, the Thunderbirds' second-leading scorer (17.9) and top rebounder (8.1).

“He’s just a tough athletic guy,” Clark said. “He can knock down threes. He extended his game last year from two years ago to where he’s not just an inside slasher-scorer. He can do both. He can shoot and extend the floor for us.”

“The way we play, everybody is pretty interchangeable,” Clark said. “We play four guards and a forward.”

Clark was an assistant coach under Cliff Ellis at Wagner when the Thunderbirds made their first two state-tournament appearances, and was promoted in 2012 after Ellis went to Clemens. Now in his seventh season, Clark has a 174-68 record at Wagner, the only school where he’s been a head coach.

Credit: Photo by David Flores / KENS5.com
Steele boys basketball coach Lonny Hubbard has guided the Knights to the UIL state tournament three times since taking over the program in 2011.

Steele (30-8) is making its third state-tournament appearance. The Knights lost in the semifinals in 2013 and 2016 under coach Lonny Hubbard, who has built one of the best 6A programs in Region IV since succeeding Brian Mitchell in 2011.

Led by future NBA star Shaquille O’Neal, Cole won the 3A state championship in 1989 and went 36-0. Coached by Noe Cantu, the Cougars (34-5) are in the state tournament for the sixth time and first since 2012. They have lost in the semifinals four times.

Other Class 6A, 5A and 3A state semifinals