Murray almost got his first triple-double, finishing with 17 points, eight rebounds and a career-high 10 assists. 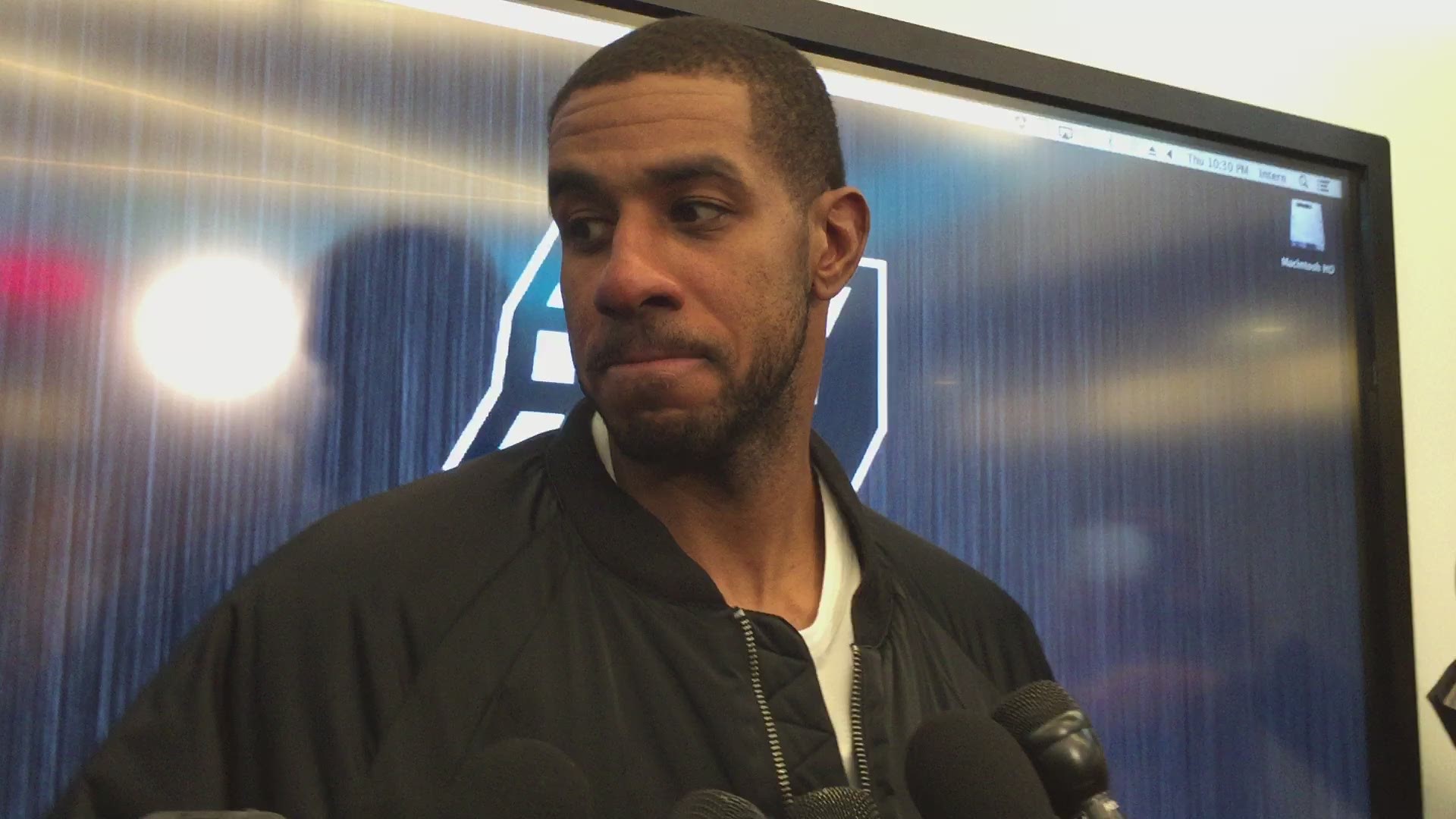 SAN ANTONIO — By the fourth quarter, the basket must have looked like it was four feet wide to LaMarcus Aldridge, who couldn't seem to miss in the Spurs' 121-112 victory against the Oklahoma City Thunder on Thursday night.

Aldridge didn't make every shot but he came close.

Aldridge scored 39 points and nailed 19 of 23 field-goal attempts at the AT&T Center, helping the Silver and Black break out of a two-game skid.

Does the rim seem to get bigger on a big scoring night?

"Sometimes, not tonight," Aldridge said. "I was just trying to stay locked in, just stay in the moment, trying to stay focused on not overthinking it. Just taking my shots, basically."

Point guard Dejounte Murray also had a stellar game, coming tantalizingly close to recording the first triple-double of his career with 17 points, eight rebounds and a career-high 10 assists.

Credit: Photo by Antonio Morano bit.ly/XR79FT / Special to KENS5.com
Spurs point guard Dejounte Murray almost had a triple-double in a 121-112 victory against Oklahoma City on Nov. 7 at the AT&T Center.

Murray, who is on a doctor-prescribed minutes restriction as he continues his comeback from a knee injury that sidelined him all of last season, played 26 minutes.

The Spurs (5-3) continue their three-game homestand Saturday against the Boston Celtics.

Aldridge made 11 consecutive field goals at one point, but he had no idea he was on such a tear.

"When you think about those things, that's when you can mess yourself up," Aldridge said. "I just tried to keep shooting it, basically."

Credit: Photo by Antonio Morano bit.ly/XR79FT / Special to KENS5.com
Spurs power forward LaMarcus Aldridge scored 39 points on 19-of-23 shooting in a 121-112 victory against the Thunder on Nov. 7 at the AT&T Center.

Aldridge had struggled offensively in the first seven games of the season, shooting 44.1 percent. He also had missed more than half of his field-goal attempts in four of the previous five games.

Murray assured Aldridge before Thursday night's game that he was going to get him involved in the offense early. Murray did just that and Aldridge responded in a big way.

“I tell him every day, ‘You’re too great of a player to just go missing in action,'" Murray said. "It’s on me being a point guard, and the rest of the team, we have to make sure a guy like that is well involved early from the jump in.

"I told him today, ‘We need you to go early and be aggressive early.' I’m going to get things going on both ends. He gave me his word and just came out and played.”

Murray, who hit 7 of 12 shots, finished with only two turnovers.

"I have to stop being sloppy," Murray said. "I watch a lot of film and a lot of my turnovers are just that, so it's great to have 10 assists and two turnovers. I'd rather have zero turnovers, though."

Popovich had good things to say about his young point guard.

"Dejounte, he's in some ways a work in progress," Popovich said. "But if that work in progress can do what he did tonight, that's pretty good. The team as a whole, I don't know what the final stat was, but I think we were close to 30 assists tonight. That's a great sign that the ball is moving a little bit."

The Silver and Black finished a season-high 32 assists. DeMar DeRozan, who had 16 points, dished out nine assists himself.

Bryn Forbes (14) and Patty Mills (10) also scored in double figures for the Spurs.

The Thunder (3-5) were led by Danilo Gallinari and Shai Gilgeous-Alexander, who finished with 27 and 21 points, respectively. Chris Paul had 19 points and five assists.

Gallinari was 3 of 4 from the field, all from the three-point line, in the first quarter. He also went 5 of 6 at the free-throw line. Paul was 4 of 7, including 2 of 3 from beyond the arc, in the first half. 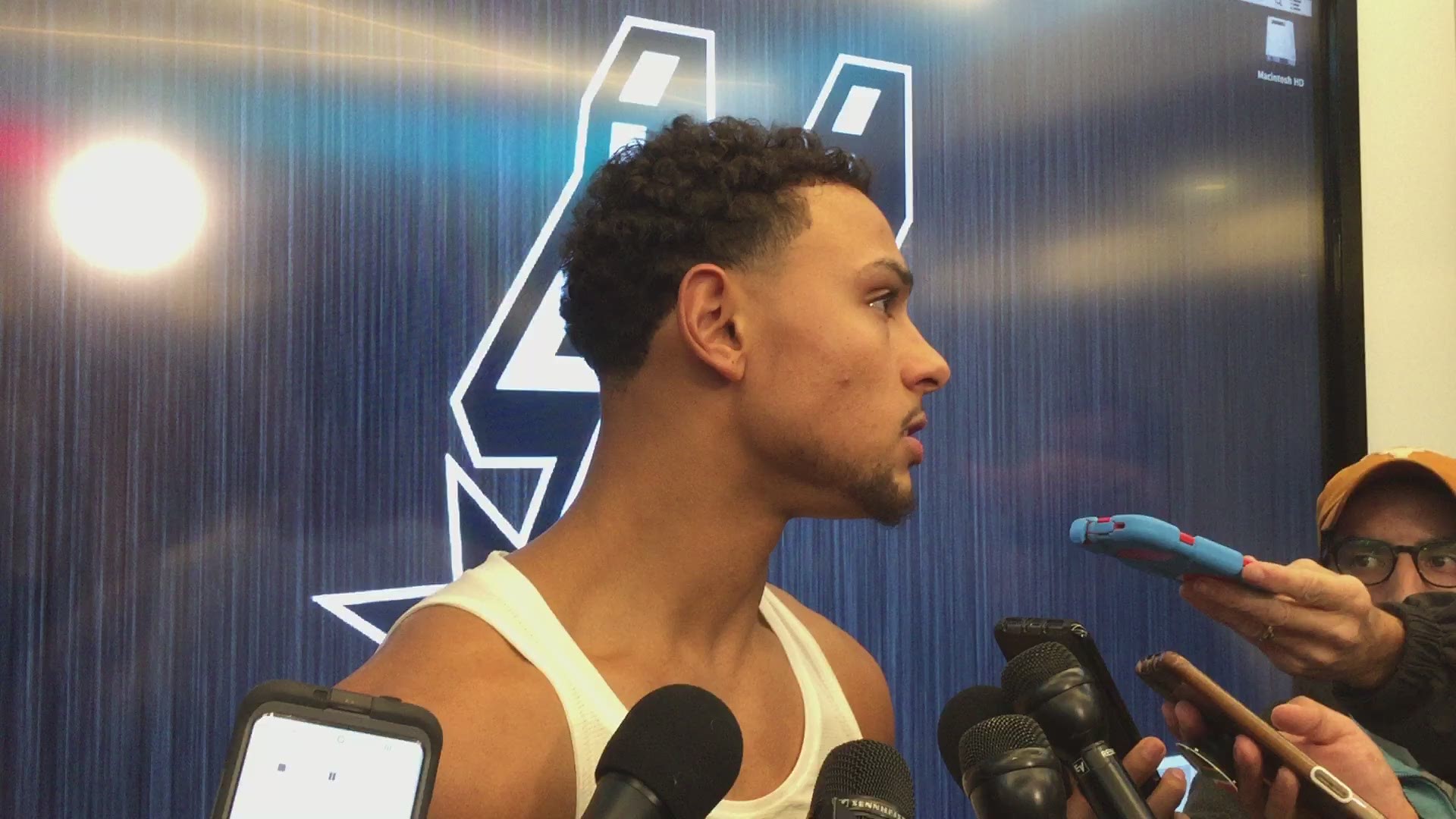 Gilgeous-Alexander (10) was the only other OKC player scoring in double figures in the first two quarters.

The Thunder shot 50 percent across the board, making 21 of 42 field-goal attempts, including 6 of 12 from the three-point line.

Aldridge carried the Spurs' scoring load in the first half with 19 points. DeRozan (12) and Murray (10) also were in double figures at the break.