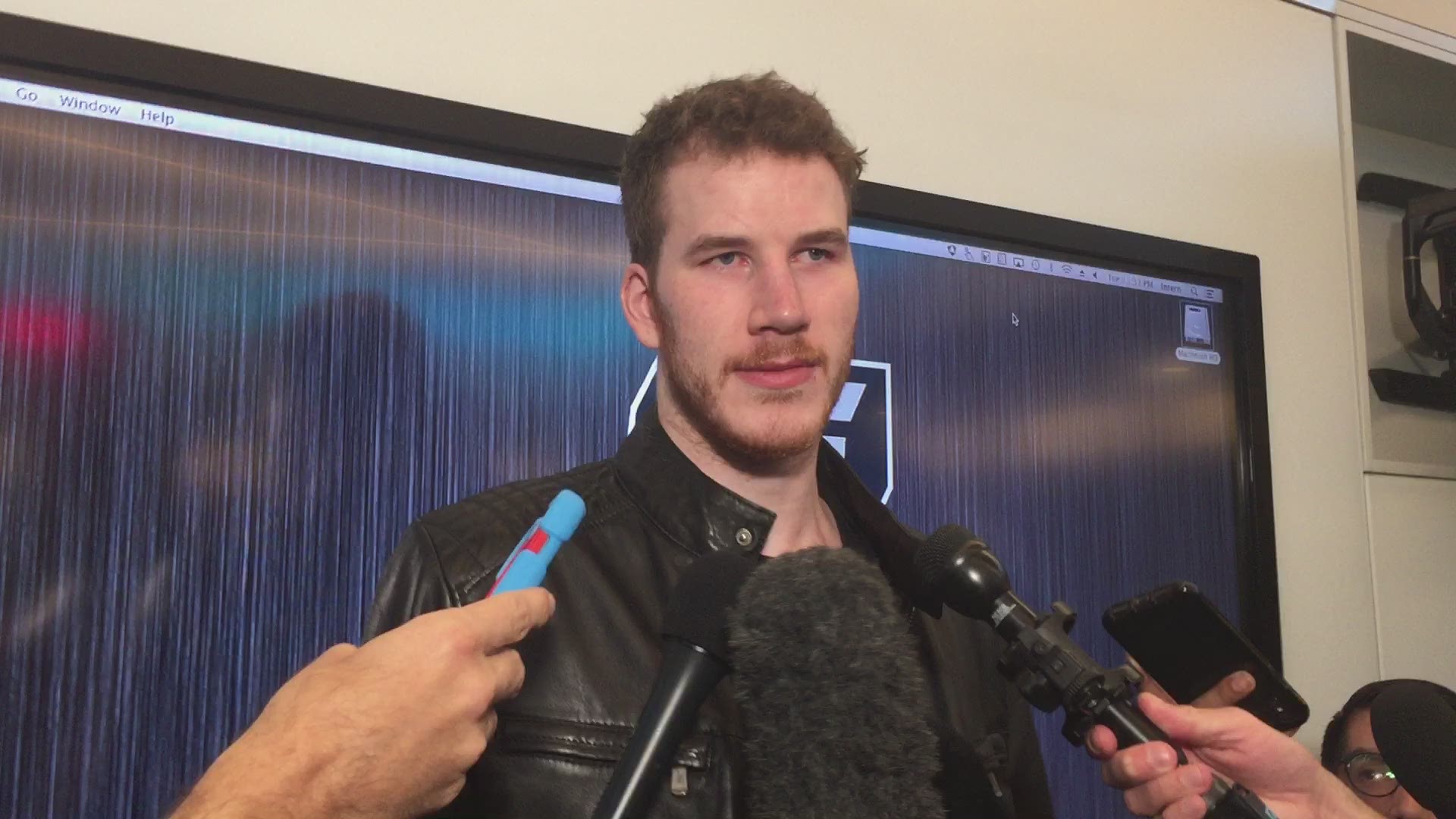 SAN ANTONIO — Whew! What a game.

Down by 22 points in the third quarter, the Spurs rallied for a stirring 135-133 double-overtime victory over the Houston Rockets on Tuesday night at the AT&T Center.

Second-year guard Lonnie Walker sparked the comeback, scoring eight unanswered points to pull the Silver and Black into a 115-115 tie at the end of regulation.

With San Antonio trailing 115-107 after James Harden made two free throws with with 1:46 left in regulation, Walker scored on an alley-oop layup and then knocked down back-to-back three-pointers in the final 41 seconds to send the game to OT.

"It was confidence," Walker said, when asked about his big fourth quarter. "My teammates kept me going and once I started feeling it, you know, I’m just going to let it go and play my game. I know what I can and cannot do, and I’m just happy that we played team ball and got this win.”

Walker scored 19 of his career-high 28 points in the fourth period, nailing 7 of 8 shots, including 3 of 4 from the three-point line.

The Spurs (8-14) withstood a 50-point game from guard James Harden and a triple-double by Russell Wesbrook to eke out the victory, two days after taking a 34-point beating from the Pistons in Detroit.

Credit: Photo by Antonio Morano bit.ly/XR79FT / Special to KENS5.com
DeMar DeRozan scored 23 points and dished out nine assists in the Spurs' 135-133 double-overtime victory against the Houston Rockets on Dec. 3.

The Silver and Black, who are only 2-8 against opponents with a record of .500 or better, host Sacramento on Friday night. Houston slipped to 13-7.

Center Jakob Poeltl also had an outstanding game, finishing with a career-high 15 rebounds and tying a career high with five blocks in 41 minutes.

"Lonnie and Jakob were spectacular tonight for all the reasons that you saw, so it got infectious," Spurs coach Gregg Popovich said. "I think the whole team, with the schedule they’ve had, they deserve a lot of credit for just playing the game and hanging in there tonight.

"They played with each other and I think there’s all kinds of improvement we can make, but this is the team that we think we have. We've just got to play like this consistently and we haven’t really done that. So, hopefully we are starting to figure that out.”

Forbes broke out of a shooting slump in the nick of time, making 10 of 13 shots, including 5 of 6 from beyond the arc, before fouling out 48.5 seconds left in the second OT. DeRozan, who played 41 minutes, led the Spurs in assists with nine.

“It’s fun, it’s always fun," DeRozan said. "Being in the moments, you just feel the crowd, especially when we fought back from being down 20. But we showed heart."

"We showed that we’re tired of being in that position, and we played with a lot of heart and toughness and that was the result, that we won," DeRozan said.

DeRozan was asked what kept him going after the Spurs fell behind by 22.

"As a competitor, you have to be fed up with losing, being in that position," he said. "Understand that everyone on this team is tired of being in this position. The only thing you can do about it is fight your way out of it.”

Harden, the NBA's leading scorer, continued his torrid pace. He finished with 50 points, hitting 11 of 38 field-goal attempts, including 4 of 20 from the three-point line. Harden earned his paycheck at the free-throw line, where he was 24 of 24.

Harden should have finished with 52 points, but a basket he scored on a breakaway dunk with 7:50 left in regulation was mistakenly disallowed by the officials. In a flash, the ball came up out of the bottom of the net after Harden jammed it through, and back into the rim before rattling out.

Officials said after the game that the basket should have counted. Harden's dunk would have extended Houston's lead to 104-89.

Russell Westbrook had a triple-double for the Rockets, finishing with 19 points, 10 rebounds and 10 assists.

Center Clint Capela scored 22 points and pulled down 21 rebounds, and guard Austin Rivers, who drained 5 of 6 three-pointers, came off the bench to add 19 points.

RELATED: SPURS GAMEDAY: Silver and Black back at square one after lopsided loss to Pistons

Capela (11) and Rivers (10) were the only Houston players in double figures at the break.

DeRozan and Gay led the Silver and Black's scoring with 14 points apiece. Gay started in place of forward LaMarcus Aldridge, who missed his second consecutive game with a sore right thigh.