Spurs point guard Dejounte Murray excited to be back on court

Murray missed 2018-19 season after tearing his right ACL during a preseason game. 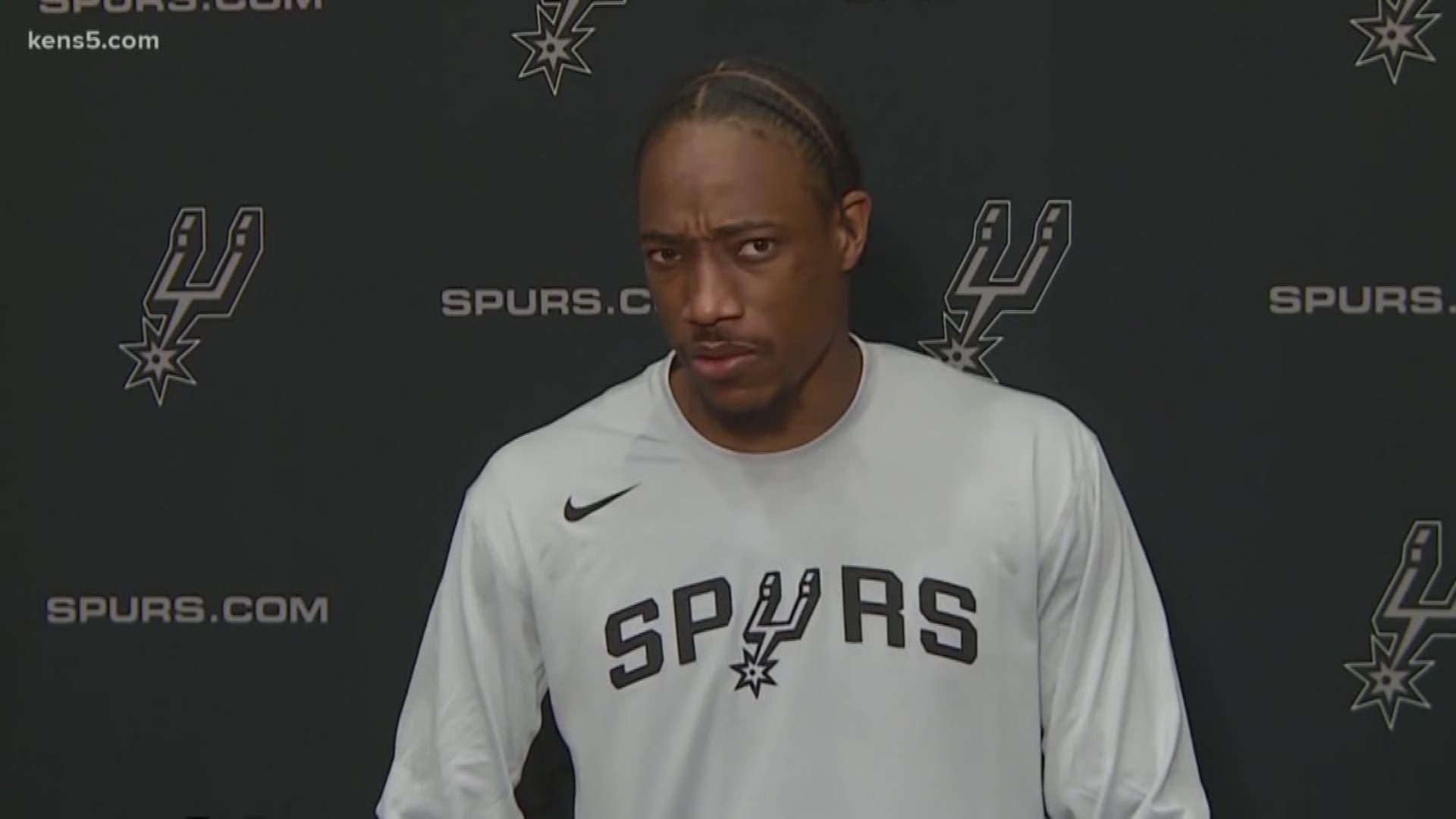 Standing before reporters, photographers and a bank of TV cameras Monday at the team's annual media day, Murray could hardly contain his excitement as he talked about his comeback from the first serious injury of his career.

Murray left no doubt he is ready to go after recovering from the torn right ACL that sidelined him for the entire 2018-19 season. Murray was injured while driving to the basket in a preseason game against Houston at the AT&T Center.

The Spurs, who lost in the first round of the playoffs for the second year in a row last season, open their four-day training camp Tuesday. They host Orlando in their first preseason game Saturday night at the AT&T Center.

Murray was asked what has him encouraged about this team heading into training camp.

"We've got a lot of dogs, a lot of dudes with chips on their shoulders," Murray said.

Will there be any restrictions on Murray's playing time heading into the preseason?

"That's a good question," Spurs coach Popovich said. "I don't know. Restrictions might be strong, but we're not going to start him off at 35 minutes (per game), just out of logic. But doctors haven't said he's going to get this many minutes or anything like that."

Murray was set to begin the season as the Silver & Black’s starting point guard last year before he injured his right knee.

Determined to get back on the floor, Murray put himself through a grueling rehab program, working out six days a week for the first eight months after getting injured.

"It was rough, but it's behind me now," Murray said. "I'm no longer worried about it. I'm somebody who doesn't live or play in fear. I'm just excited to play basketball.

"I'm really, really happy. I'm proud of myself, which is rare. I'm always trying to make everybody else happy. Just being here knowing that I get to compete tomorrow in our first practice, I'm just proud of myself for my work and focus." 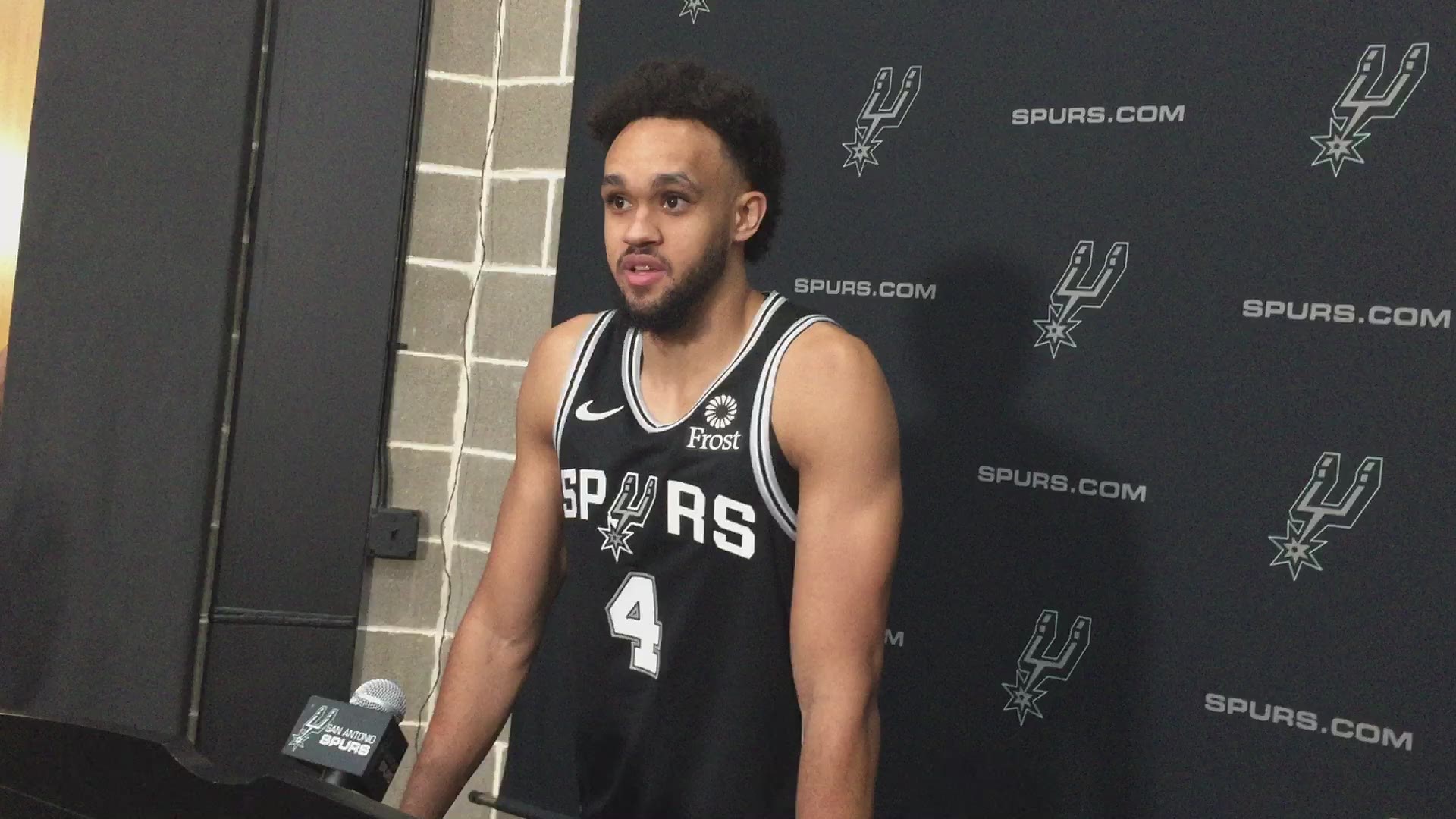 The Spurs lost not only their point guard when Murray went down, they had to move on without their best perimeter defender.

Murray was named to the NBA  All-Defensive Second Team after the 2017-18 season, becoming the youngest player in league history (he was 21) to make the All-Defensive Team.

Murray's return should give the Spurs' a boost on both ends of the court.

"Pushing the ball, using his quickness, getting up and down the floor, getting steals and turning those into easy baskets, just using his energy out there," veteran forward LaMarcus Aldridge said, when asked what strengths Murray brings to the team.

Of course, defense will remain the team's top priority as long as Popovich coaches the team. The Silver and Black were inconsistent on defense last season, and the lapses cost them at critical times.

"I think you all know Pop, so defense is definitely our focus," Aldridge said. "We've just got to go back and look at what we did well and the things we didn't do well, and try to focus on the things that we didn't do well. I think it's a mindset that everyone has to come into camp with. Our defense has to be better."

"We've got to be a better defensive team," Popovich said. "That's always been something that we've been good at. If you're going to have a successful season, you need be to a top defender, especially if you want to go deep in the playoffs. And we were average, at best last year. It's got to be our No. 1 priority."

"He looked great," DeRozan said of Murray. "It was fun just seeing his excitement, getting out there wanting to play, kind of get a feel for him. Me and his relationship has grown a lot over the summer. I'm excited to see him back out there.

"He sent me a lot of film of me last year of what he'd do in certain situations and make my job easier. For a young guy to be able to take the initiative, to come show me certain things of what he's thinking says a lot. That gave me great deal of comfort, so I'm excited."

Murray was selected by the Silver & Black with the 29th pick in the first round of the 2016 NBA draft. He supplanted Parker as the team's starting point guard in January 2018 and averaged 8.1 points, 5.7 rebounds, 2.9 assists, and 1.2 steals in his second season.

The Spurs advanced to the playoffs for the 22nd consecutive season in 2018-19, tying the NBA record.

DeRozan expressed optimism that the Silver and Black will continue their streak of playoff appearances in the ultra-competitive Western Conference.

"It's something about every guy in that locker room that has a toughness to them, a will, to want to win and kind of an underdog mentality that we all carry individually and bring that all in as a team," DeRozan said. "It's going to be tough, especially (after) the tough year that we had going out to Denver and losing in seven games.

"A lot of that is weighing on a lot of us to have a fresh start, to have Dejounte back and coming into everything healthy."

Tim Duncan, the greatest player in Spurs history, came out retirement this summer to join Popovich's coaching staff. Popovich was the only coach at media day. Duncan, who ended his 19-year career after the 2015-16 season, is expected to speak to the media sometime this week.