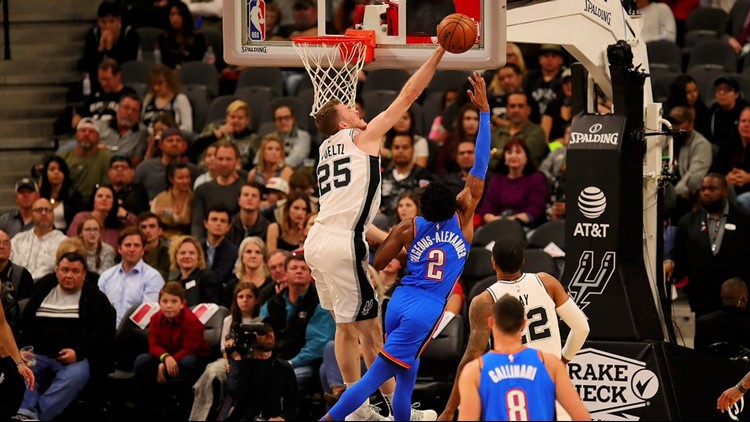 Notable: OKC is sixth in the Western Conference standings, trailing No. 4 Utah (35-18) by three games and No. 5 Houston (33-20). The top four teams in each conference have a home-court advantage in the first round of the playoffs. San Antonio remains 10th in the West, 4.5 games behind No. 8 Memphis (27-26). Portland (25-29) is ninth and leads the Spurs by 2.5 games The top eight teams in each conference advance to the postseason . . . After Tuesday's game, the Silver and Black have a nine-day All-Star break . . . The Spurs resume their Rodeo Road Trip in Utah on Friday, Feb. 21 . . . They end the trip against OKC two days later . . . San Antonio's next home game is against Interstate 35 rival Dallas on Feb. 26.

Sooner or later, the road-weary Spurs are going to win a game again.

After winning consecutive home games for the first time in a month on Jan. 29 and Feb. 1, the Silver and Black have gone 0-5 on their annual Rodeo Road Trip.

The Spurs, who play the Thunder in Oklahoma City in their final game before the All-Star break, are coming off a 127-120 loss to the Denver Nuggets. San Antonio led by as many as 23 points but Denver roared back, outscoring the Silver and Black 74-53 in the second half.

Despite the tough loss, Spurs coach Gregg Popovich praised his players' effort and wrote off the defeat to hot shooting by Jamal Murray and Paul Millsap in the last two quarters.

“Nuggets made a lot of shots, played great," Popovich said. “They’re doing everything they can. They played a great game. Give Denver credit for making shots.

"Millsap (and) Murray just took over as far as shooting’s concerned. They did a great job. They’re going to keep playing. They're a great team. They’re not going to stop. We just couldn’t sustain the scoring.”

Murray, a guard, scored 14 of his 26 points in the fourth quarter to help spark the Nuggets' rally. Millsap finished with 22 points off the bench, with 16 coming in the second half.

DeMar DeRozan scored a game-high 30 points in the Spurs' 109-103 loss to the Oklahoma City Thunder on Jan. 2 at the AT&T Center.
Photo by Antonio Morano bit.ly/XR79FT / Special to KENS5.com

The Spurs were up 67-53 at the half and extended their lead to 86-63 before the Nuggets rallied and cut the deficit to four (93-89) after three quarters.

A power forward, Millsap nailed a three-pointer with 9:02 left to give Denver its first lead (102-99) of the game. Playing only 19 minutes on his 35th birthday, Millsap made 8 of 13 field-goal attempts and was 4 of 5 from three-point distance. Murray was 11 of 21 from the field and hit 2 of 8 three-pointers.

"That lead, just not being able to contain their offense," Spurs backup guard Patty Mills said. "Let them get away from us. They shot the ball really well. High offensive team. Higher basketball IQ . They know how to play with each other. That was the thing that was shown in the second half.”

San Antonio played without leading scorer DeMar DeRozan, who missed his first game of the season with back spasms. The Spurs have listed DeRozan as doubtful in their injury report for Tuesday night's game.

LaMarcus Aldridge picked up the slack in DeRozan's absence Monday night, scoring a game-high 33 points on 13-of-25 shooting. He was 4 of 8 from beyond the arc.

"He was ready," Popovich said of Aldridge. "Everybody played really well. There’s nothing else I could ask of them. Denver just showed a lot of shooting ability. They just knocked them down and we weren’t able to keep up.”

Lonnie Walker IV, who started in DeRozan's place, was asked what the Spurs could have done to turn back the Nuggets rally.