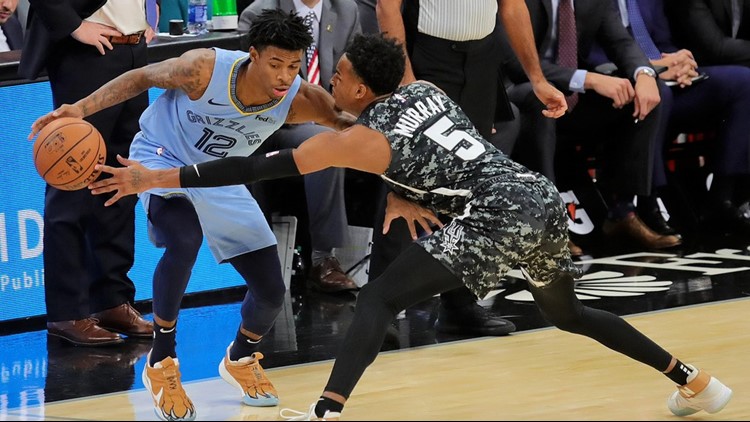 Notable: Friday's game is the second of four straight on the road for the Spurs. The Silver and Black play at Toronto on Sunday and at Miami next Wednesday . . . San Antonio is eighth in the Western Conference standings, one game ahead of Memphis for the last playoff spot in the West.

After back-to-back wins against two of the best teams in the league, the Spurs pivot to play an opponent that's right on their heels in the highly competitive Western Conference.

The Silver and Black (16-20) are No. 8 in the West standings heading into Friday night's game in Memphis, just one game ahead of the No. 9 Grizzlies (16-22) for the last playoff spot in the conference.

The teams have split two games this season, with both winning on the road. Led by LaMarcus Aldridge, who scored 40 points, the Spurs rolled to a 145-115 blowout of the Grizzlies the last time they met on Dec. 23. DeMar DeRozan scored 26 points on 10-of-11 shooting and dished out 10 assists.

While the 30-point margin of victory is the largest of the season for the Silver and Black, it is not the most lopsided defeat for Memphis. Orlando beat the Grizzlies by 32 (118-86) on Nov. 8.

The Spurs haven't won three straight since starting the season 3-0. They have won back-to-back games only twice.

It's still early but given the trend of the first half of the season, San Antonio and Memphis are likely to be among the teams fighting for a postseason berth this spring. The Spurs have made the playoffs for 22 consecutive years, sharing the NBA record with the Syracuse Nationals / Philadelphia 76ers.

The Silver and Black are surging after knocking off Milwaukee by 22 points Monday in San Antonio and Boston by 15 on Wednesday. Milwaukee is a league-best 33-6 and leads the East, and the Celtics (25-11) were No. 2 in the East before falling to San Antonio.

DeRozan, who scored a game-high 31 points against Boston, talked about the importance of the Spurs playing with consistency, regardless of the opponent.

“It's got to be like that every single night," he said. "I think after the last game I said, ‘Don’t matter who we play. We’ve got to go out there and compete and take on the challenge no matter who we're playing against.’ And you know last week and this week speak volumes, and (it's) just got to carry over and carry on against Memphis.”

Spurs center Jakob Poeltl blocks a shot by Memphis forward-center Jaren Jackson Jr. in a 113-109 loss to the Grizzlies on Nov. 11 at the AT&T Center.
Photo by Antonio Morano bit.ly/XR79FT / Special to KENS5.com

Friday night's game in Memphis is the second of four in a row on the road for the Spurs, who have won four of their last six.

The Silver and Black play defending league champion Toronto (25-13) on Sunday and end the four-game road trip against Miami (27-10). on Wednesday. Miami and Toronto are No. 2 and No. 4 in the East, respectively.

Sparked by DeRozan, the Spurs scored 22 of the game's 25 points in the rout of Boston. DeRozan continued his torrid pace, getting his 30 points on 10-of-17 shooting. Lonnie Walker IV came off the bench and scored 19 points in 19 minutes.

The Celts cut San Antonio's lead to seven (76-69) midway through the third quarter, but the Silver and Black repelled the rally and got their lead back to double digits.

"It’s big," DeRozan said of the Spurs' 23-2 start. "It’s even tougher to sustain, especially on the road against a great team, like Boston, playing in this building. You know they are not going to give up. You know they’re going to pick it up and play even more aggressive.

"We sustained the runs that they had. You know when they were going to make a run. You know that’s big for us, confidence-wise and understanding what we can do on a nightly basis.”

"We started pretty good on offense, but the defense got us through since we didn’t shoot threes very well," Spurs coach Gregg Popovich said. “Our themes have been the same for, like, 23 years. It doesn’t change with every game. Sometimes we do it well, sometimes we don’t.”