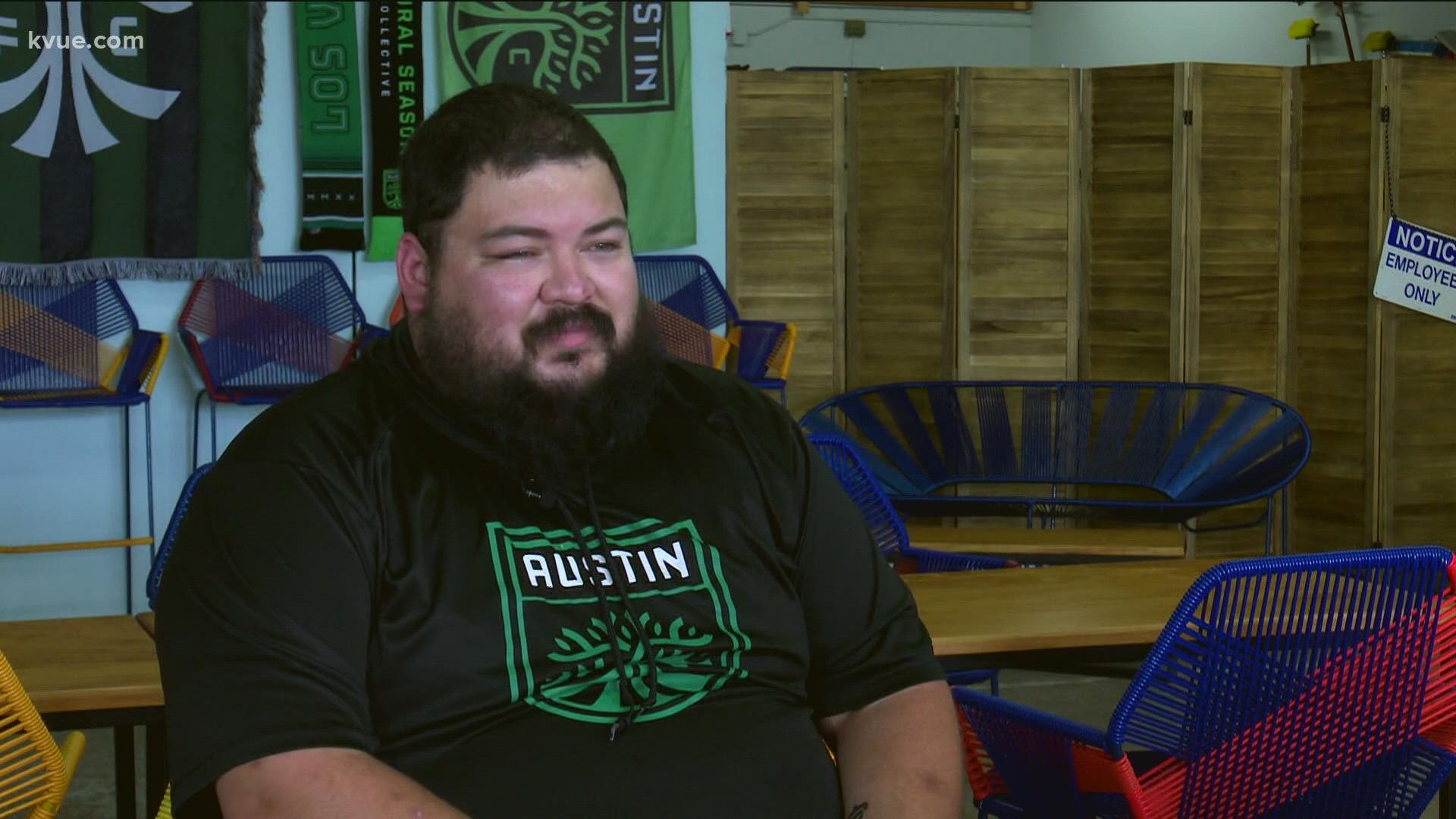 AUSTIN, Texas — It's 1 p.m., and Del Rio native Carlos Trevino-Frank sits inside an empty Hopsquad Brewing Company, quite a ways away from home.

He has seven hours to kill before another Austin FC home match, but seven hours is nothing for this road warrior.

Trevino-Frank is what soccer fans call a "capo." His job is to sing and chant non-stop for 90 minutes.

“As capos, we have to bring that energy. The crowd feeds off of us, we feed off of them,” Trevino-Frank said.

Trevino-Frank has been to five of seven home games, which is all the more impressive considering his home is 600 miles away.

“So I live in Springdale, Arkansas. It’s about 10 minutes down the street from the University of Arkansas,” he said.

Trevino-Frank could easily cheer for an MLS team that's much closer to where he lives, such as Sporting Kansas City, which is about 2.5 hours away.

Yet, his affinity for Austin would never allow it.

“My home is Texas, and my city is Austin,” Trevino-Frank said.

Before every game day at Q2 Stadium, he's up before the sun rises and typically leaves his home around 4:30 a.m.

On this day, his wife, Ashley, is joining him for the first time.

“I’ve come to realize that there’s no normality when it comes to my husband,” Ashley Trevino-Frank said.

The drive from Arkansas to Austin is 8.5 hours long.

Carlos Trevino-Frank said his favorite part is when he crosses over the Red River and shortly after is greeted with a "Welcome to Texas" sign.

“The first time I saw the stadium, [I] drove up the Friday before the home opener and it was just incredible," he said. "[It was] something special getting to see the stadium and just knowing that I’m home, basically.”

It's home because of the people, especially the people that make up the tight-knit community of the supporters' section.

“They’ve embraced me with open arms and a lot of the Los Verdes members are like family," Carlos Trevino-Frank said.

It's a family that's helping him honor a family member.

His grandmother, Yvonne Trevino, was a huge soccer fan. She passed away in 2012 at 65 years old due to lung cancer. He remembers how his grandmother instilled a passion for the game in all her grandchildren.

“My favorite memory will always be watching any U.S. vs. Mexico game with her. She was torn. She was always cheering for both teams and my cousin and I would always sit there completely confused. We’re like, ‘Well Grandma, who are you going for? Are you with the U.S. or are you cheering for Mexico?’ And she’d be like, ‘Both. I don’t know. Watch the game,’” Carlos Trevino-Frank said.

Yvonne Trevino watched her final games in San Antonio, so there's no question which MLS team Carlos is cheering for these days.

“I think deep down that’s what’s really driving my passion to continue to support Austin,” he said.

By the end of the season, he'll have traveled almost 15,000 miles to watch his beloved Austin FC.

“She would tell me I’m completely insane,” Carlos Trevino-Frank said. “And then she would turn around in that same breath and ask me if I got her a ticket.”