HIGHLIGHTS: Austin FC playing a man down from red card, let up 2 goals in second half, lose 2-1

Here are the latest score updates, news and highlights from the Austin FC vs. Sporting Kansas City match. 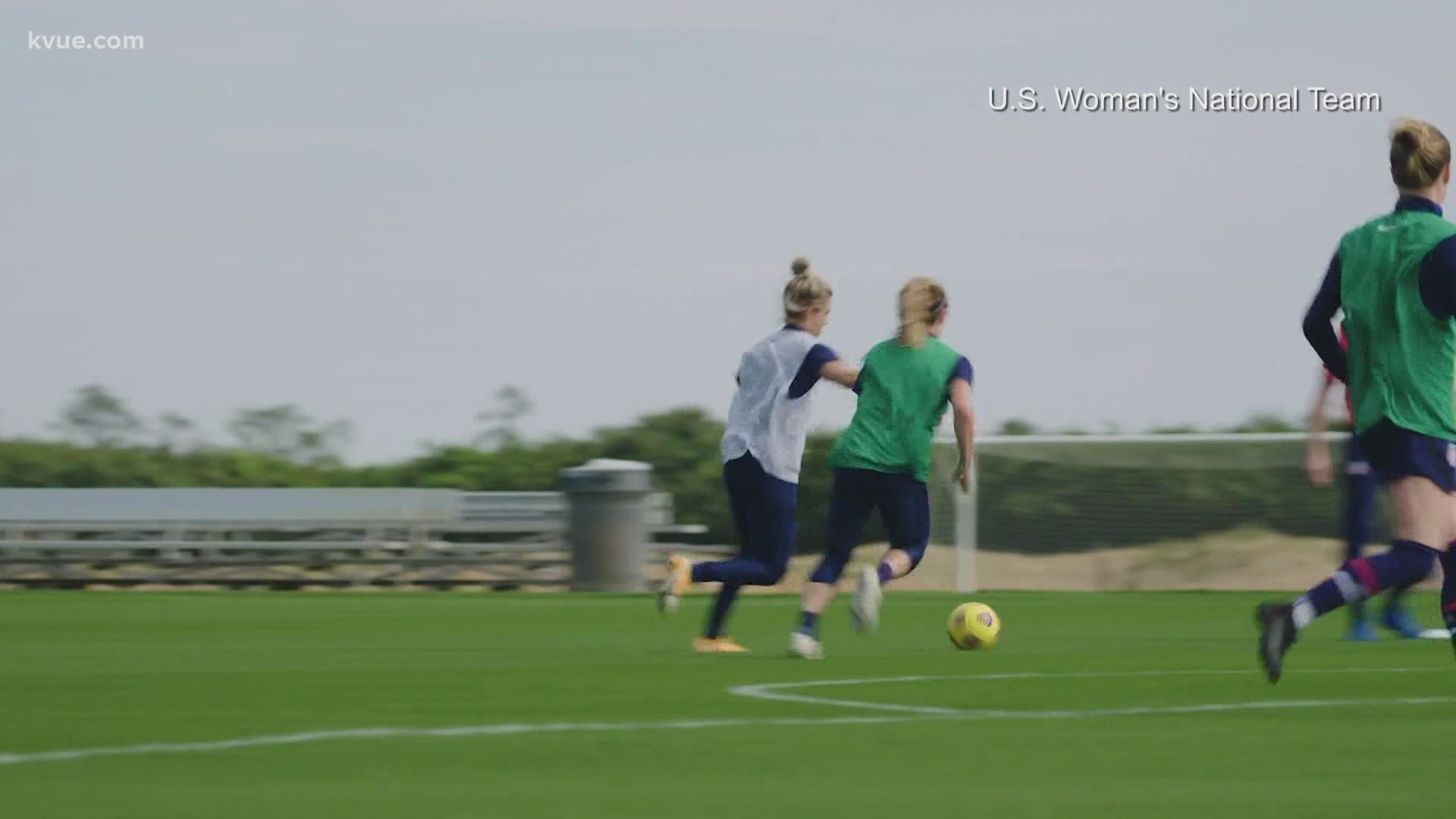 Austin FC started fast with a goal in the sixth minute by Jon Gallagher, who was making his first start for the club.

"I think we had some ideas on what we thought we could exploit vs. Kansas City and I think it was really clear that it was working exactly how we planned on it ... Jon deserved the opportunity," Austin FC head coach Josh Wolff said. "He's been playing well, he could have three or four goals already so [I'm] really excited for him to get on the board."

Austin FC goalkeeper Brad Stuver also had a standout first half, making four saves, including a highlight reel diving save on Gianluca Busio in the 17th minute and a kick save on Daniel Salloi in the 32nd minute.

Austin FC's lead was broken in the second half on a corner kick headed in by Ilie Sánchez in the 81st minute. Austin FC had been playing with 10 men after Alex Ring was booked with his second yellow card in the 67th minute, disqualifying him from the game.

Wolff said the red card changed everything. Wolff said the club had not worked on playing with 10 men yet, being such a new team.

"No excuses, we'll work on that for next time," Wolff said.

Tough one. Gotta regroup and get ready for next Saturday. pic.twitter.com/CSrK6UXMim

"I think we take the things that we did good from this game and the things we did well in the first three [matches] and we [look at] all that optimistically," Austin FC defender Nick Lima said. "We're a good team. I think Kansas City got fortunate got to [play against] 10 men. I feel like we could have won."

You can watch the full highlights of the match here. Austin FC will take on the LA Galaxy on Saturday, May 15.

Major League Soccer standings are ranked like the following: teams get three points for a win, one point for a draw and zero points for a loss. In the event of a tie in the standings, the tiebreaker goes to:

Note: Records below are recorded as (win, loss, draw)

90'+1: Austin FC corner: Kicked out of bounds for goal kick.

Tough one for #AustinFC to let up another goal in stoppage time, playing down a man. #VERDE #LISTOS pic.twitter.com/2X26PLXavl

#AustinFC allows a goal on a corner kick, down a man and playing with 10 after Ring’s 2nd yellow card earlier. #VERDE #LISTOS pic.twitter.com/J63HVogcpE

78': Lindsey (Sporting KC) right-footed shot is deflected off a defender for a corner.

67': Alex Ring was given his second yellow card in two matches, which resulted in a red card and Austin FC will play a man down for the rest of the match. It was Ring's first sending off in the past five years of MLS.

67' | Second yellow card shown to Alex Ring and he is sent off. #AustinFC will play with 10 men. Armband will now be worn by Besler.

58': Gianluca Busio stole the ball and played it to Daniel Salloi, who shot it wide of the goal.

56': Ilie Sánchez (Sporting Kansas City) is shown the yellow card for a foul.

53': Alan Pulido (Sporting Kansas City) right footed shot from the centre of the box is blocked.

50': Cecilio Domínguez (Austin FC) left-footed shot from the left side of the box misses to the right.

48': Jared Stroud (Austin FC) right-footed shot from the right side of the box is saved in the center of the goal.

Austin FC leads 1-0 over Sporting KC at the break courtesy of Jon Gallagher's first Austin FC goal in his first start. Gallagher has come off of the bench in previous games and provided a spark. He's nearly found the back of the net in previous matches, but his goal drought was broken in the 7'. He received a cross from Jared Stroud on right wing. Stroud has now recorded an assist in three straight games.

Austin FC goalkeeper Brad Stuver has made many crucial saves to keep the clean sheet alive, including a phenomenal one-on-one kick save. Stuver has four saves at halftime.

That was fun. 45 more minutes to close it out. pic.twitter.com/EuglGHkn0T

44':  Tomás Pochettino (Austin FC) right-footed shot from outside the box is close, but misses to the right.

41': Jhohan Romaña (Austin FC) is shown the yellow card for a foul.

40': Alan Pulido (Sporting Kansas City) right-footed shot from the center of the box is high and wide to the left.

38': Dániel Sallói (Sporting Kansas City) right-footed shot from the center of the box is blocked.

33': Tomás Pochettino fires a right-footed shot from outside of the 18-yard box and hit the crossbar.

31': Brad Stuver saves a breakaway by Sporting KC with his left foot.

WHAT. A. SAVE. @brad_stuver proving @TheStrikerTexas true that he really does cover the rest of the world not covered by water. Fantastic save. #VERDE #LISTOS pic.twitter.com/nl85d3Ntdm

30': Dániel Sallói (Sporting Kansas City) right-footed shot from outside the box is blocked.

26': Roberto Puncec (Sporting Kansas City) header from the left side of the six-yard box misses to the left.

17': Gianluca Busio left-footed shot is saved by Brad Stuver out of bounds for a corner.

16': Cecilio Dominguez right-footed shot from outside the penalty area is saved.

14': Alexander Ring (Austin FC) right-footed shot from outside the box is too high following a corner.

9': Dániel Sallói (Sporting Kansas City) right-footed shot from the center of the box is too high.

7': Austin FC goal – Jared Stroud played a cross from the right wing to Jon Gallagher, which he finished for a goal with his right foot.

Here’s #AustinFC first goal. Another absolute DIME from Jared Stroud for the second week in a row. Jon Gallagher finishes the goal in his 1st start for the #VERDE pic.twitter.com/zz38DnUs7b

4': Roberto Puncec (Sporting Kansas City) with an attempt from the left side of the box is saved.

This is the same starting lineup as the previous match against Minnesota United FC, with one change: Gallagher starting in place of Danny Hoesen.

Starting XI for @AustinFC against #SportingKC

Note: As mentioned on VerdeVUE Pod, we now see Gallagher starting up top in place of Hoesen. #LISTOS #VERDE https://t.co/tbjjIvj41q

Here is everything you need to know about the match:

After beating Minnesota United FC 1-0, Austin FC has now won back-to-back games. With the win, Austin FC now has six points on the season and two road wins among an eight-game road stint to start its inaugural season.

The team was originally scheduled to tackle a seven-game road stretch to start the season before the home opener on June 19 against the San Jose Earthquakes. That tough beginning to the season got even tougher as Austin FC announced Tuesday changes to its matches, including moving one of its later road games against Sporting Kansas City from July 17 to June 12, which means they have eight straight road games before the highly-anticipated home opener.

Austin center back Matt Besler will be having a homecoming of sorts, playing against the club he spent 12 seasons with.

Sporting Kansas City had a bounce-back 2020 season, finishing first in the Western Conference. They lost 3-0 at home to Minnesota United in the MLS Cup Playoffs, however. The 2017 MLS Goalkeeper of the Year, Tim Melia, has not played in a match yet this season due to injury, but he could make his return against Austin this weekend.

For the latest Austin FC news, visit kvue.com/austinfc. For Austin FC news straight to your phone, you can text "SOCCER" to 512-459-9442. You'll be sent a link to the latest game, KVUE's latest VerdeVUE Pod episode and other news.