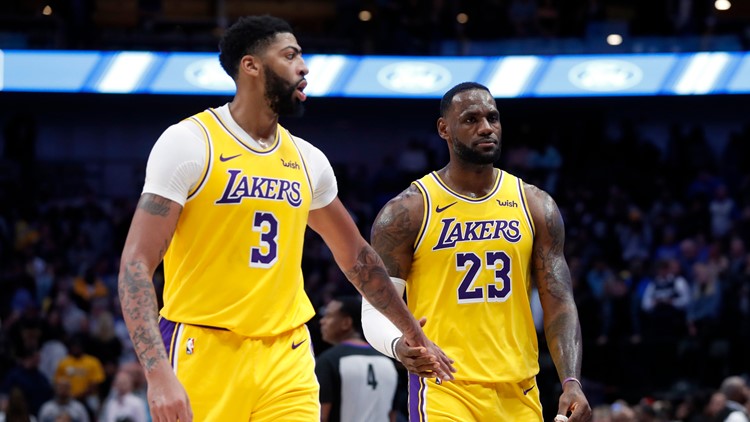 Photo by: Associated Press
Lakers Anthony Davis, left, and LeBron James have averaged a combined 50.7 points, 16.4 rebounds and 14.4 assists in their first season as teammates.

Notable: Monday night's game against the Lakers is the first of three in a row at home for the Spurs, who are 4-4 at the AT&T Center this season. After playing the Lakers, the Silver and Black host the Minnesota Timberwolves on Wednesday and Los Angeles Clippers on Friday.

After weeks of frustration, the Spurs finally snapped their eight-game losing streak on Saturday with a 111-104 road win against the New York Knicks.

With the Los Angeles Lakers up next, the Silver and Black's stay in the win column could be short-lived.

Led by LeBron James and Anthony Davis, the Lakers own the NBA's best record (14-2) and have won their last seven games. L.A. also is a league-best 6-1 on the road.

James and Davis are averaging a combined 50.7 points, 16.4 rebounds and 14.4 assists in their first season as teammates. Davis has averaged 25.5 points per game, just slightly ahead of James (25.2).

Even after breaking out of their eight-game skid, the Spurs (6-11) have more work to do before they can climb back up to the .500 mark.

Still, the win over the Knicks was a relief for a team that hadn't won since beating Oklahoma City on Nov. 7 at the AT&T Center.

"We competed," Spurs forward DeMar DeRozan said. "We competed yesterday as well, but things didn’t go our way. We just have to keep being more consistent and build our confidence when we do something positive. Tonight, a win was a positive step that we just have to continue to take from here.”

Spurs forward LaMarcus Aldridge goes up for a shot in the Silver and Black's 103-96 loss to the Los Angeles Lakers on Nov. 3 at the AT&T Center.
Photo by Antonio Morano bit.ly/XR79FT / Special to KENS5.com

After falling short in Philadelphia on Friday night, the Silver and Black jumped on the Knicks early and never trailed. They led 32-16 after one quarter and 68-43 at the half, going up by as many as 28 points before New York closed the gap. The Knicks (4-12) outscored San Antonio 61-43 in the second half.

“We played pretty good defense," Spurs coach Gregg Popovich said. "We turned it over a lot in the third quarter and let them back in the game.  The defense was pretty good.

"I thought they did a great job of being on the road as long as we have been, found some energy and did a good job. I was happy with that effort.”

The game in New York capped a four-game road trip for the Spurs, who will play three consecutive games at home this week. After playing the Lakers, the Silver and Black face the Minnesota Timberwolves on Wednesday and Los Angeles Clippers on Friday.

“Tonight was one of those nights where they (Knicks) left me to go double team a lot and I tried to move off the ball," said Poeltl, who started. "That worked really well, especially in the first half. I tried to be more aggressive on offense when I get the opportunity to.

Poeltl was asked about his thoughts on the Spurs snapping their eight-game losing streak.

“It’s a relief, obviously," he said. "I think we played really well today, especially in the first half. We’ve been getting better and now finally we got that win again.

I think we did a good job staying together, figuring out what we were doing wrong but it (losing) still takes a toll on the team, on the morale. Getting that win back was definitely big for us.”