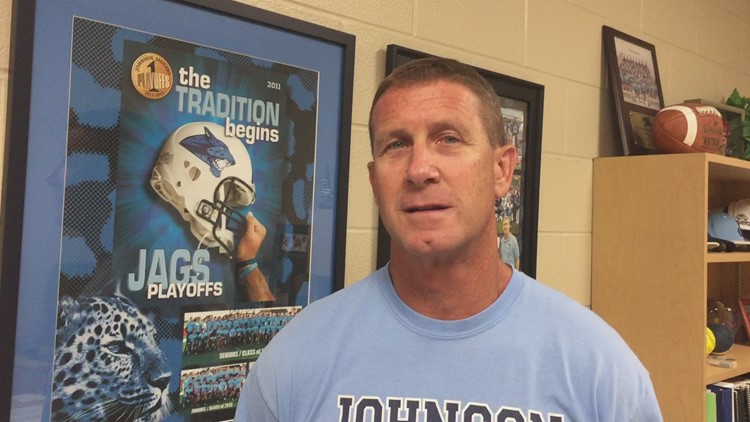 Rittimann starts his new job Monday after heading the football program at Johnson since the North East ISD school opened in 2008. But given the specter of the coronavirus, there's no telling when Rittimann will be able to start getting acquainted with his new players.

"This week was when I was going to get started and meet the kids, meet the coaches, but now we don't have any kids or coaches here," Rittimann said Thursday.

The upheaval has done nothing to curb Rittimann's enthusiasm and anticipation to start a new chapter in his career.

"I'm looking forward to it very much," Rittimann said. "I was around some great people in the North East district for 29 years, and now I'm getting the opportunity to work with other outstanding people at Alamo Heights.

"It's a new challenge, a new start, and I'm excited about it. I've always wanted to be an athletic director, but I still love coaching. I wasn't ready to leave coaching."

Rittimann, 53, described his new job as a "dream career opportunity."

Alamo Heights combined the jobs of head football coach and athletic director to create a dual position after Mike Norment, who had headed the football program for eight seasons, resigned in December.

"Somebody from the district called to tell me that they were combining the two positions and asked if I would be interested," Rittimann said. "I couldn't resist the opportunity."

Alamo Heights ISD students were scheduled to resume classes Monday after being off for spring break last week, but with the deadly virus gripping the nation, schools across Texas have shut down until at least early next month. Given the magnitude of the health crisis, students could be out of school indefinitely.

With schools closed, athletes and all other students in extracurricular activities are prohibited from using district facilities.

"It's very weird to look out my office window and not see any kids," Rittimann said. "It's unique to the times that we're in today. I can't wait for us to to come back to school and get started, because I think we all want to get back to a routine. It just gives me that feeling in my stomach of a brand new start, a brand new beginning, an excitement of meeting a bunch of really good people."

Rittimann has spent time in his office at Alamo Heights every day this week, taking care of correspondence and meeting with contractors working on the construction of new athletic facilities on campus and the renovation of Orem Stadium.

"I'm making a lot of phone calls, writing emails and trying to get things going," said Rittimann, who graduated from New Braunfels Canyon. "I'm also working from my house. I take my laptop home and sit in my living room, and kind of do the same thing."

Under normal circumstances, Rittimann probably would be on a first-name basis with some of his players by now. As it is, he's spoken to the team only once.

"After I got hired, the next day I came over here (Alamo Heights) just to sign some paperwork and make it all official," Rittimann said. "They were having their athletic class, so I went out there toward the end and the coaches introduced me to the team.

"I got to talk to them for about two minutes at the end of the class. That's really been it."

A San Antonio native, Rittimann was an assistant coach under Jim Streety at Madison for 17 seasons before getting hired as Johnson's first head football coach on Dec. 20, 2007. He went 74-59 at Johnson and led the Jaguars to the playoffs eight times, including the state semifinals in 2013, and one district title.

Rittimann started his stint at Madison as a freshman coach and quickly climbed the ranks, becoming the Mavericks' offensive coordinator in 1994 and assistant head coach later.

Streety, who left Madison after the 2013 season to become athletic director of the New Braunfels ISD, has been one of Rittimann's most trusted mentors through the years.

"He called me about the (Alamo Heights) job and we talked a few times," Streety said. "The timing was just right for him to make the change. I'm so happy for him that he did that. Change rejuvenates you. It's good for you."

Streety said there was no question Rittimann would have a successful career as a coach. A former Southwest Texas State quarterback, Rittimann started his career with a two-year stint as a graduate assistant at SWT. When Streety moved from New Braunfels to Madison in 1991, he gave Rittimann his first high school job.

"He did a great job for us at Madison," Streety said. "He was our offensive coordinator and did the play-calling during games. It's no surprise that he's gotten to where he is now.

"All guys in that position have that ability to relate to the kids and staff members. You've got to be a people person. People like Ron would be good in a lot of endeavors."

Hiring an assistant athletic director, a newly created position, and a defensive coordinator will be at the top of Rittimann's to-do list next week.

"This is a whole new model for the Alamo Heights athletic department," Rittimann said, referring to the addition of the assistant athletic director's job. The assistant AD will not coach, concentrating solely on administrative duties.

Alamo Heights finished 3-7 overall and 3-4 in District 14-5A Division II last year, missing the playoffs for the third time in five seasons. Because Orem Stadium is being renovated, the Mules will play all their games on the road this season.

"This is going to be a very competitive district," Rittimann said. "We're going to have some great games on Friday nights. What I'm really excited about is putting together a new coaching staff. That's the one thing I was really proud of that we did at Johnson. I thought we had one of the best staffs in the state of Texas. I'm not just talking about football.

"I'm talking about every sport. I couldn't have been more proud of the people we had on our staff. Not only were they great coaches, they were great people. That's what I want to do at Alamo Heights. I know we already have some great coaches here, and that's what excites me."