Travis Sthele, a standout athlete who has committed to play baseball at Texas, has sat out the Rattlers' first two games to rest his arm after a busy summer. 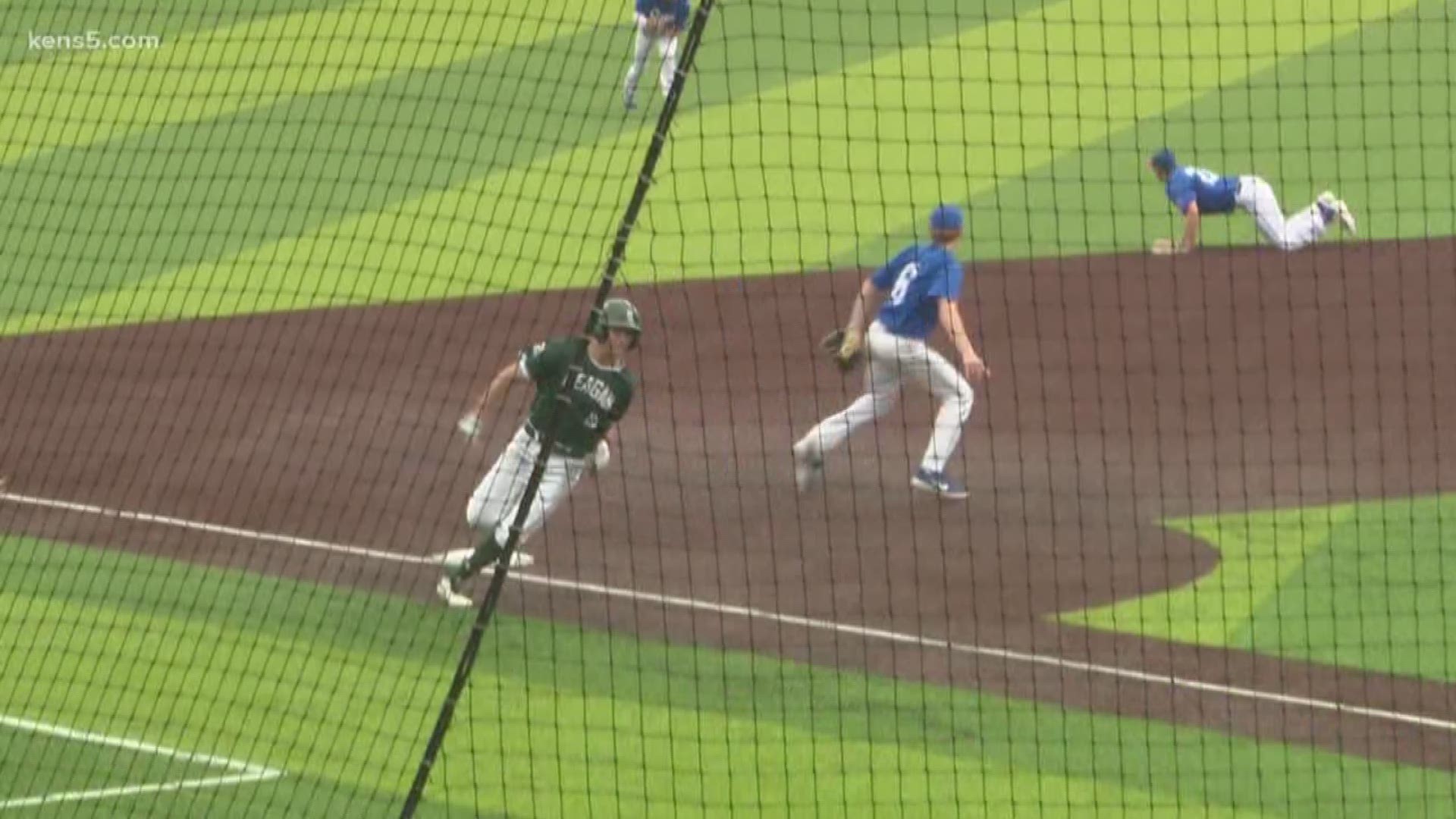 SAN ANTONIO — You are not alone if you've wondered why Reagan quarterback Travis Sthele hasn't played in the Rattlers' first two games of the season.

Sthele's absence hasn't gone unnoticed by many high school football fans throughout Greater San Antonio. But there's a simple explanation for why Sthele, one of the best quarterbacks in the area, hasn't taken a single snap as a senior.

Sthele, who has committed to play baseball at Texas, has been resting after a busy summer on the diamond.

"There is no injury," Reagan football coach Lyndon Hamilton said. "This is strictly a preventive-type measure."

A right-handed pitcher with a 96 mph fastball, Sthele played with some of the country's elite high school players in developmental leagues and all-star showcases this summer.

"He was in Florida, he was all over the United States all summer long and if he doesn't get some rest, then basically he's going to overwork that arm," Reagan football coach Lyndon Hamilton said. "He is legit to go this week.

"We're just making sure his arm, and elbow and shoulder were good to go. He will more than likely be all in the mix this week for sure," Hamilton said.

Reagan has gotten off to a 0-2 start this season without Sthele. The Rattlers play Clemens (2-0) in their last non-district game Friday night at Lehnhoff Stadium. Reagan opens District 27-6A play against Johnson on Sept. 20.

Credit: Photo by Antonio Morano bit.ly/XR79FT / Special to KENS5.com
Reagan senior quarterback Travis Sthele, who has committed to play baseball at Texas, has been the Rattlers' starting signal caller since his sophomore season.

"We shot ourselves in the foot," Hamilton said. "We've still got a bunch of young kids. We lost some kids throughout the spring and summer, and we're still feeling the effects. But we feel that from Week 1 to Week 2, we did a hell of a lot better. We didn't win but we were in the game."

Sthele has been the Rattlers' starting quarterback since his sophomore season. He passed for 2,169 yards and 19 touchdowns last year, when Reagan advanced to the playoffs for the 12th time in 13 seasons.

Sthele has played on the Reagan baseball team since he was a freshman. Coached by Chans Chapman, the Rattlers reached the Class 6A state final in 2017 and 2018 and lost in the regional semifinals last spring.

"When you work all summer long on that shoulder, and you go straight from last year's football season to baseball season, and from baseball season into summer, when you're pitching throughout the summer, if we don't give these young kids some rest, and allow some time off for those elbows, arms and shoulders, ultimately they may have a breakdown," Hamilton said.

Reagan opened its football season with a 17-0 loss to Brennan, and fell to Steele 34-21 last Friday. Both those teams are 2-0.

"They were non-district games," Hamilton said. "He wanted to play, but there wasn't any need to rush him back. We pretty much sidelined him, shelved him, pretty much all of two-a-days (preseason workouts)."

"He's there in the huddles, but we haven't let him throw any in practice. Before the Steele game, he was out there throwing. I've never coached a kid that can throw 96, to be honest with you, so I've got to make sure we're taking care of him. I'm working hand in hand with his parents."

Credit: Photo by Antonio Morano bit.ly/XR79FT / Special to KENS5.com
Reagan quarterback Travis Sthele, an ace pitcher who has committed to play baseball at Texas, passed for 2,169 yards and 19 touchdowns as a junior last year.

Asked if Sthele would play this week, Hamilton said, "I believe so. It looks good. It looks promising. We'll hopefully get him ready for district this week."

Hamilton said he wasn't sure whether Sthele would start, or how much he would play, against Clemens on Friday night.

"We'll ease him back into the groove," Hamilton said. "I don't know how many reps he's going to get. I do expect him to get some snaps. We should see him out there."

Hamilton chuckled when he talked about some of the speculations Sthele's absence has fueled.

"Somebody asked me, 'Is Travis in trouble?'" Hamilton said. "I said, 'No, he's not in trouble. We don't have any discipline issues with that young man. This has been strictly about giving his arm some rest.'"