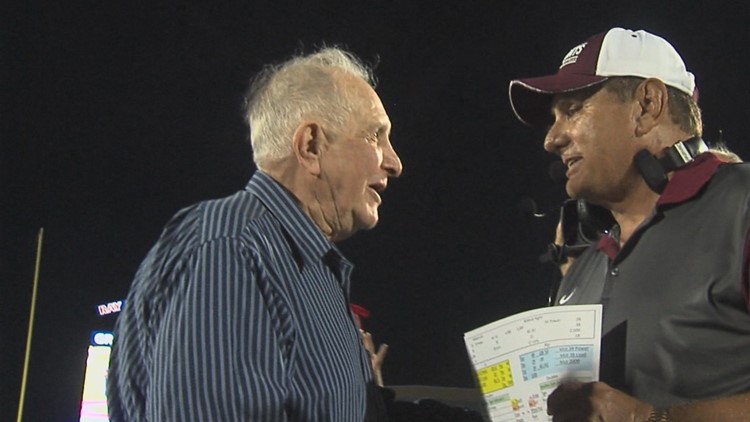 Gregory-Portland had made the football playoffs only once before Ray Akins took over the program in 1965. But within four years, Akins had the Wildcats off and running on a streak of district championships that set a state record.

“When I came to Gregory-Portland, the thing I knew about the high school was Coach Akins, and the tradition that he set there,” Rick Rhoades, G-P athletic director and head football coach, said Tuesday. “We're trying to get that back to the point where he had it for so many years.

Akins, who built a Texas high school football power during his storied 23-year coaching tenure at G-P, died early Tuesday. He was 92.

“In my short time in visiting with Coach Akins, I could see he was a very dynamic man,” Rhoades said. “Our community is heartbroken. We lost such a great man, such a great icon, of Gregory-Portland High School.”

Akins lived with his wife Virginia on a ranch in Franklin, about 35 miles north of College Station, during most of his retirement.

The Wildcats were 208-51-7 in their 23 seasons under Akins, winning a state-record 12 consecutive district championships and advancing to the Class 3A state final in 1971. Class 3A was the second-largest classification in the UIL then.

Former Gregory-Portland football coach Ray Akins, third from left, claps as his son, Marty, who played quarterback for him, raises his framed retired jersey No. 10 at a G-P game this season.

Akins' only son, Marty, played quarterback three seasons for his father at G-P and was a senior on the team that lost to Plano 21-20 in the state final. Marty Akins went on to start as a wishbone quarterback under Darrell Royal at Texas for three seasons, and earned All-America honors as a senior in 1975.

Marty Akins was inducted into the Texas High School Football Hall of Fame in 1987, and his father joined him in 1992. They were the first father-son combination to be enshrined in the Hall. Ray Akins is also the grandfather of New Orleans Saints quarterback Drew Brees.

Ray Akins made Gregory-Portland synonymous with consistency and excellence in high school football circles during his long tenure with the Wildcats. G-P finished 1-9 in Akins' first year, but that was the last time the Wildcats were .500 during his tenure. They had gone 0-9-1 the year before Akins took over the program, and had losing seasons in five of the six seasons preceding Akins' hiring.

G-P improved to 5-5 in 1966, and went 7-2 and 5-5 the next two years before starting its streak of 12 consecutive district titles in 1969. The Wildcats recorded seven perfect regular seasons with Akins at the helm.

“Without question, he was one of the great coaches in Texas high school history,” former Clemens coach Robert Lehnhoff said. “They were so fundamentally sound and consistent. They were like (Corpus Christi) Calallen is now.”

Lehnhoff split two second-round playoff games with Akins, losing the first meeting in 1986 and winning the rematch in 1987. The second encounter turned out to be Akins' last game.

G-P reflected the discipline and grit of its head coach. A World War II combat veteran who served with the Marines in the Pacific, Akins pushed his players like a drill sergeant. But he also gave them father-like guidance on and off the field, building relationships that lasted long after graduation.

“I think that says a lot in itself. So many years later, they love the man and the job that he did there. The second thing is that Coach Akins came and addressed our team twice and, I mean, you could have heard a pin drop. Everyone in Gregory-Portland knows what an icon Coach Akins is. He was great.”

Akins spoke to the Wildcats in 2016 when he was at the school for a reunion, and again this season when Marty Akins' jersey number (10) was retired.

The Wildcats won 16 district championships and made the playoffs 17 times in their 23 seasons under Akins, reaching the state semifinals two other times (1976, 1984). He also won one district title at Tidehaven and four at Freer.

“They were so fundamentally sound and they were going to line up and run the ball, and then they were going to play-action pass,” said Streety, now athletic director of the New Braunfels ISD. “They were a direct reflection of him (Akins). He gave the impression of being a physically tough guy. Hard-nosed, I think, would be a good term. Everybody respected him because he did an awesome job for a long, long time.”

Vito Duran, 83, has been the play-by-play radio announcer for G-P football games since early in Akins' stint with the Wildcats.

“It hurt. It hurt,” Duran said, alluding to how he felt when he heard the news of Akins' passing.

Duran recalled the qualities that made Akins such a successful coach.

“He was a tough Marine, as tough as leather,” Duran said. “He believed in discipline. The boys who played for him would go into the barbershop and say, 'I want a Ray Akins haircut.' It was a flattop. He was very stern with the boys, strict with them, and he always had them in shape. But he also loved his players.

“He was a father figure to them. Whenever he came back to the games, they'd all crowd around him and shake his hand. They'd give him a firm handshake. They just respected him.”