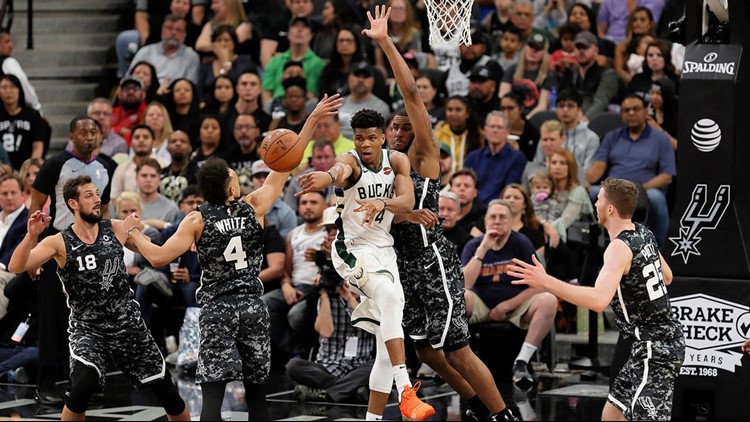 Photo by: Photo by Antonio Morano (bit.ly/XR79FT) / Special to KENS5.com
Milwaukee forward Giannis Antetokounmpo had 27 points and 13 rebounds in the Bucks' 121-114 loss to the Spurs last March 10 at the AT&T Center.

Notable: The Spurs play their next four games on the road, starting Wednesday against the Celtics in Boston, after hosting Milwaukee on Monday. San Antonio plays at Memphis on Friday, at Toronto on Sunday and at Miami on Jan. 15 . . . The Bucks own the best record in the NBA and sit atop the Eastern Conference standings, five games ahead of No. 2 Boston . . . The Bucks are coached by former Spurs assistant coach Mike Budenholzer.

The NBA isn't big on sympathy. Players know better than to expect anybody to feel sorry for them when they're going through hard times.

And so it is for the Spurs, who have lost two straight and face the challenge of playing the league's best team for the second time in three nights.

Led by dynamic power forward Giannis Antetokounmpo, the Milwaukee Bucks improved to 32-5 with a 127-118 victory against the visiting Silver and Black on Saturday night.

Fouled repeatedly by the Spurs, Antetokounmpo made 15 of 18 free throws, including all 12 of his attempts in the second half. He had 10 free throws in the third quarter alone.

Antetokounmpo has a sore back but is listed as probable for Monday's game against the Spurs (14-20).

DeMar DeRozan scored 28 points and dished out six assists in the Spurs' 121-114 victory against the Milwaukee Bucks last March 10 at the AT&T Center.
Photo by Antonio Morano bit.ly/XR79FT / Special to KENS5.com

“I thought we did a really good job in the first half, but he got away from us," Spurs coach Gregg Popovich said of Antetokounmpo. "The plan sort of dissipated as the second half progressed, but he did a great job, obviously. It’s a hell of a team. Coach (Bud Budenholzer) is doing a great job.

"Their record is there for a reason. Just too many mistakes, too many fouls. Those brothers (Brook and Robin Lopez) killed us with the blocks, and we were fouling too much. The competitiveness was there. I think we can play better on Monday night and we’ll try to win a basketball game.”

The Spurs beat the Bucks 121-114 the last time the teams met at the AT&T Center last year.

DeMar DeRozan led the Silver and Black's scoring in Saturday's loss, finishing with 26 points on 8-of-14 shooting. He also had four rebounds and five assists.

LaMarcus Aldridge had a double-double with 16 points and 10 rebounds, but he went 0 for 7 in 15 second-half minutes and went scoreless. Rudy Gay (15) and Patty Mills (11) rounded out San Antonio's double-figure scoring, and Trey Lyles finished with a game-high 14 rebounds.

Derrick White started at point guard for Dejounte Murray, who missed the game for personal reasons, and Lonnie Walker IV replaced Bryn Forbes at the other starting guard. Walker scored eight points in 25 minutes in his first career start.

“I thought he was wonderful," Popovich said of Walker. "You know, he looked calm, played good, solid basketball. I liked it.”

Asked what Walker has done to earn a starting spot, Popovich said: "Well, that, and the fact that he’s getting some things done. He’s a heck of an athlete and he adds something else to the group that we don’t really have.”

Walker is in his second season with the Spurs, who selected him with the No. 18 pick in the first round of the 2018 NBA Draft.