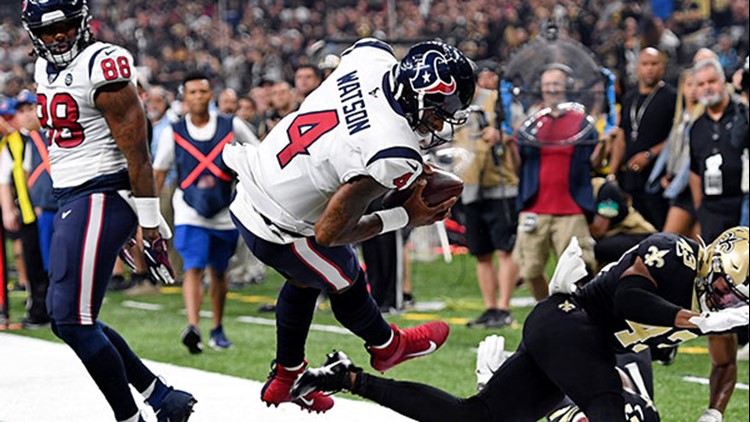 NEW ORLEANS — Wil Lutz made a 58-yard field goal as time expired, and the New Orleans Saints beat the Houston Texans 30-28 on Monday night in a game that had three scoring plays in the final minute.

"That one's got to be a top-one moment for me," Lutz said, adding that as much as he tries to treat each kick the same, "I got to be honest. That one felt a little different."

New Orleans had lost their previous five season openers. And after last season ended with a bitter loss in the NFC title game, the Saints had expressed urgency in recent weeks to start the 2019 campaign off well.

"I knew how big this win would be," Lutz said. "There was a little more weight on my shoulders on that one."

The moment the ball left Lutz's foot, holder Thomas Morstead appeared to know it was good, and turned toward his kicker triumphantly flexing both arms at his side. Moments later, the crowd noise in the Superdome reached an ear-splitting crescendo as the ball split the uprights and Saints players began jubilantly streaming onto the field.

Deshaun Watson threw a 37-yard touchdown pass to former Saints receiver Kenny Stills with 37 seconds left, capping a two-play, 75-yard drive that put the Texans in front after they began their final possession down by six with 50 seconds left.

But there was just enough time for Saints quarterback Drew Brees, who capped a 370-yard, two-touchdown performance by completing a 15-yard pass to Ted Ginn Jr., an 11-yarder to Michael Thomas and another pass to Ginn for 9 yards in quick succession. That allowed New Orleans to save its final timeout until just 2 seconds remained and set up Lutz's career-long kick.

"When you have Drew as your quarterback, all I cared about was getting ready for the kick, because I knew with 37 seconds left there was going to be a chance," Lutz said.

The 40-year-old Brees completed 32 of 43 passes. He threw one interception deep in Houston territory in the first half that could have proved costly, but did enough to make up for it.

Brees appeared to have all but sealed it when he spotted Ginn deep down field on third and 2 and connected for a 41-yard gain to the Houston 44 at the 2-minute warning. Alvin Kamara, who had 169 yards from scrimmage, followed with an 11-yard run, and the Saints ran the clock down to 55 seconds before Lutz converted a 47-yarder.

One of Brees' TD passes went to reserve QB and utility player Taysom Hill, who also subs in as a tight end or slot receiver. Brees' other TD went to second-year pro Tre'Quan Smith.

Watson completed 20 of 30 passes for 268 yards and three touchdowns — two of them to DeAndre Hopkins — and also ran for a 21-yard score on a fourth-down play.

The Texans finished with 180 yards rushing — 68 yards more than the Saints allowed in any game last season — with Carlos Hyde rushing for 83 yards and Duke Johnson 57.

There appeared to be disagreement over officials' handling of a 10-second runoff after a replay review in the final minute of the first half, when the Saints were trying to score with their hurry-up offense.

After the game, NFL senior vice president of officiating Al Riveron acknowledged an error had been made to the Saints' detriment — again.

The review booth stopped the game with 26 seconds left to look at whether Thomas' catch was long enough for a first down after he was initially marked just short and in bounds. After the review resulted in a first down, officials cited NFL rules requiring a runoff. The runoff began from when the game was stopped, not when Thomas came down with the ball 15 seconds earlier.

Brees could be seen animatedly disputing the decision, but referee John Hussey announced at that time that the runoff was correct. The Saints had only 16 seconds left when they snapped the ball on their own 47. They got close enough to try a 56-yard field goal as the half expired, but Lutz's kick was just wide.

Fans in the Superdome, who won't soon forget officiating gaffes in last season's NFC championship game that also went against the Saints, booed as time expired.

"That can't happen. That's a game changer," Brees said. "If we had 15 more seconds, are you kidding me?"

The Saints' Marcus Williams, who had a momentum-swinging interception earlier in the second half, stayed down on a knee after Johnson's 32-yard run in the fourth quarter. He left the field on his own after a trainer briefly spoke with him.

On the first play of the fourth quarter, Drew Brees found Tre'Quan Smith to give New Orleans the lead back, 24-21.

But Deshaun Watson led the Texans back in the final minute for the go-ahead score!  This is how Houston went up 28-27.

The Saints didn't waste any time getting into the end zone to start the second half.

But Houston answered with the second Watson to Hopkins TD pass of the night.

Facing a fourth and 1, Deshaun Watson calls his own number and takes it in from 20 yards out.  Touchdown Texans!

The Saints followed with a time-consuming drive that ended in a field goal, cutting Houston's lead to 7-3.

Houston then drove on their next possession down the field, ending with a Watson to Hopkins touchdown pass to give the Texans a 14-3 lead.

The Texans and Saints went up and down the field, but still no score, thanks in part to Whitney Mercilus picking off Drew Brees in the red zone.

That was followed shortly after by this deep ball from Deshaun Watson to Will Fuller.  It was a thing of beauty and put the Texans in position to get the game's first points.

There are a lot of question marks for the Texans, most notably at the running back position.  Lamar Miller went down with a season-ending injury against Dallas in their preseason match-up, so they’ll lean on Duke Johnson and Carlos Hyde to carry the load.  Neither of them have played a snap for the Texans.

Houston has one of the most exciting players in football in quarterback Deshaun Watson, but he'll be behind an offensive line that has had its issues this preseason.

The Texans will also be without defensive Pro Bowler and 2014 No. 1 pick Jadeveon Clowney, who was dealt to the Seattle Seahawks last week.

RELATED: Forecast: The Saints should embrace the villainy

RELATED: Texans, Rice pair up for course on how to run an NFL franchise

Houston will take on a Saints team with a chip on their shoulder.  New Orleans was denied a likely trip to the Super Bowl after a non-call on a clear pass interference in the NFC championship game against the Rams.

Behind Drew Brees and Alvin Kamara, the Saints have one of the most potent offenses in the NFL and J.J. Watt and the rest of the Texans will have their hands full trying to contain them.

Stay with KHOU.com throughout the night for updates from the game.  We’ll be keeping them here on this page.