Woman responds to uproar over her tweet about J.J. Watt

Where'd the money go? That's what a woman asked Houston Texans star J.J. Watt on Twitter, talking about the money he raised after Hurricane Harvey hit. 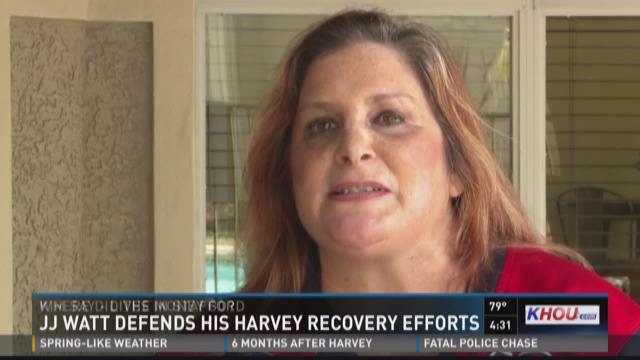 It all started with a tweet from the Texans who congratulated Watt for winning the Laureus Sporting Inspiration Award for his fundraising efforts following Hurricane Harvey.

The @LaureusSport Awards honor the greatest sportsmen and sportswomen across all sports each year. pic.twitter.com/sRnv2yEzvB

The defensive end had a goal of raising about $250,000. Instead, $37 million poured in. That’s why watt won this big award in Monaco Tuesday night.

And he's posted quite a bit on social showing him and boots on the ground helping Harvey victims.

“Kim,” who, yes, apparently runs an adult cake business, replied to that Texans tweet with this question: "Do we know where any of money went ... Because I can't find one person they got any help from the J.J. Watt Foundation for Hurricane Harvey.

But do we know where any of money went because I can't find one person they got any help from the JJ Watt foundation for Hurricane Harvey and I know JJ's a great man.

Watt didn't just respond, he retweeted her question with an answer.

He pointed out there are 2.3 million in people in Houston, and he can't reach every single person.

But he said, “We've rebuilt homes and day cares, provided food and medical care and our work is far from finished! I promise we're doing the best we can!”

There are 2.3 million people in Houston alone, Kim. I apologize that we aren’t able to reach every single person, it’s simply not possible. We’ve rebuilt homes & day cares, provided food & medical care and our work is far from finished! I promise we’re doing the best we can!!! https://t.co/X0Uj8chCRu

Thousands of people respond to Watt's tweets on a normal day, and this one really fired them up.

JJ you don’t need to explain yourself to her

And Alfredo Averado thanked Watt for all he's done for Houston.

Thank you for all you have done for the city of Houston.

Caroline Wood pointed out that since J.J.'s foundation is a 501c, his foundation's expenses are public information, and anyone can see where he spent the money.

As a 501c, your foundations expenditures are available as public info, anyone can see where you spend the money.... no need to apologize

A lot of people straight came for Kim, like “RJ” who asked, “Can you make me a cake that has a picture of a business going bankrupt? It's for a friend.”

Hey, Kim - can you make me a cake that has a picture of a business going bankrupt? It’s for a friend.

We tracked down the woman behind the tweet. Kim Say is living in Stafford because her Meyerland home and business flooded.

“I didn’t want it to be about J.J. personally. It was the foundation. I feel terrible that J.J. may think I’m this big schmuck, because I’m not,” Say said.

She wanted to set the record straight Wednesday.

“The thought that he hates me is just tearing me up inside. It was not meant to be a dig against J.J. by any means, by any means. I am his number one fan…or one of them!”

However, she stands by her question.

“Where’s the $31.5 million? I know it has gone to a lot of good things, but there are a lot of us still out here without homes, without businesses, without cars, without computers, without phones, without furniture, without a lot of things, and we don’t know where to get that,” Say said.

Check out these links for some answers.

Student write notes to Watt, he responds with meeting