The fundraiser raised $41.6 million making it the largest crowdsourced fundraiser in world history. 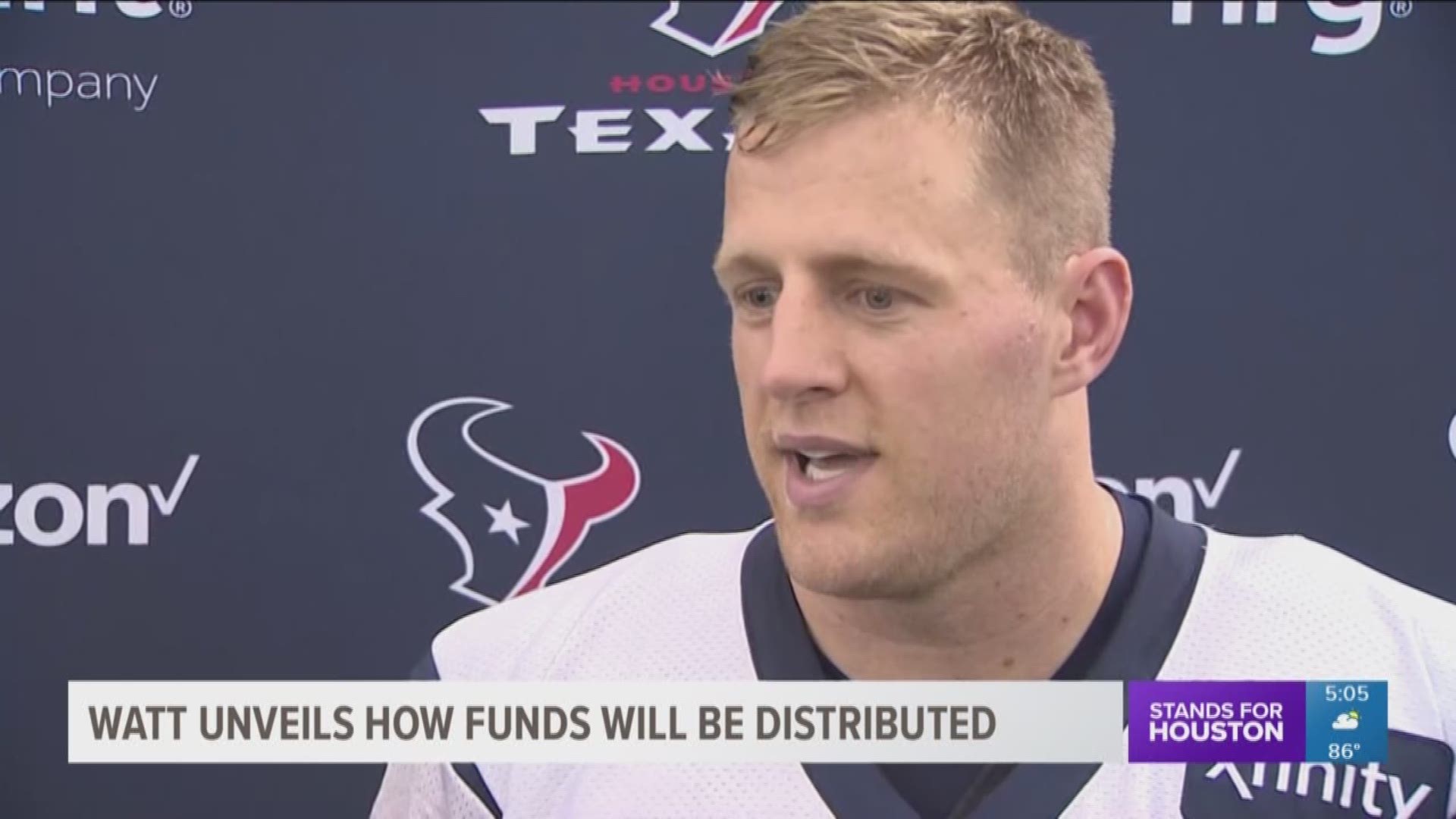 Watt after practice Monday said the goal is to make sure the donated money goes as far as possible. Watt also talked about how the money has impacted thousands of lives in the last year.

"As you look back on it, you really understand how incredible it really was, how thankful I am for so many people to help out and be willing to help out," Watt said. "It really helped to show me the good side of people and that I should have hope, and I should have positivity."

Watch the press conference here or in the video below.

Watt's fundraiser brought in $41.6 million, making it the largest crowd-sourced fundraiser in world history. All funds have been distributed to eight nonprofits: All Hands and Hearts, Americares, Boys & Girls Clubs, Baker Ripley, Feeding America, Habitat for Humanity, Save the Children and SBP.

"In our conversations, we made sure that it was all staying in Houston," Watt said of the nonprofits chosen. "That was the biggest thing. Houston and the surrounding areas were the areas that were affected, and that was where we wanted this support to go."

“As I reflect on the events of Hurricane Harvey one year ago, the memories of destruction and devastation remain, but they are accompanied by memories of hope, selflessness and the beauty of the human spirit. The actions of professional first responders and everyday citizens alike were an inspiration to the world and a shining example of the inherent good that lies within us all. Those actions locally were then supported by the actions of hundreds of thousands from around the world showing their support and donating their money in order to help out in any way they could. I was fortunate enough to witness that generosity first hand, as the fundraiser that I started with a simple goal of $200,000 turned into an unbelievable outpouring of support from people all around the globe. When it was all said and done, after the late donations and checks that came in after the deadline were counted, the total amount that was donated and is now hard at work in the community was $41.6 million. In the past year, those funds have been used to repair and rebuild houses, allowing people to finally return and once again have a place to call ‘home’. Those funds have restored and rebuilt childcare centers so that parents can once again have a place to take their children where they know they will be safe, so that they can return to work and resume a sense of normalcy. Those funds have provided millions and millions of meals to people who weren’t sure where their next meal might be coming from after being devastated by the storm. And those funds provided physical and mental health care to those who suffered from the events of that awful weekend one year ago. While a great deal has been accomplished in the past 12 months, there is still much work to be done. Moving forward, there will be more of the same, as we continue to work with our incredible nonprofit partners to provide as much help and support as we possibly can for those affected by Harvey. I cannot thank everyone enough for your support and generosity. You have truly provided an unbelievable example of what the human spirit is capable of accomplishing. Every time that I am fortunate enough to witness someone step back into their home for the first time or a child run around on the playground again, I am reminded of the generosity of strangers that helped make it all possible. Thank you and never stop spreading the positivity! #HoustonStrong”

1 / 44
Lisa Carter/KHOU.com
The Houston Texans practice at the Houston Methodist Training Center on Aug. 27, 2018, before their last preseason game against the Dallas Cowboys Thursday evening.

THE FUNDS RAISED HAVE BEEN USED ON THE FOLLOWING:

MOVING FORWARD, THE WORK CONTINUES. THE PLAN FOR THE NEXT 12 MONTHS IS DETAILED BELOW:

J.J. Watt and the Texans help Houston after Harvey