Dallas Cowboys’ quarterback Dak Prescott will miss his first action as a professional due to injury but he is well suited to make a full recovery. 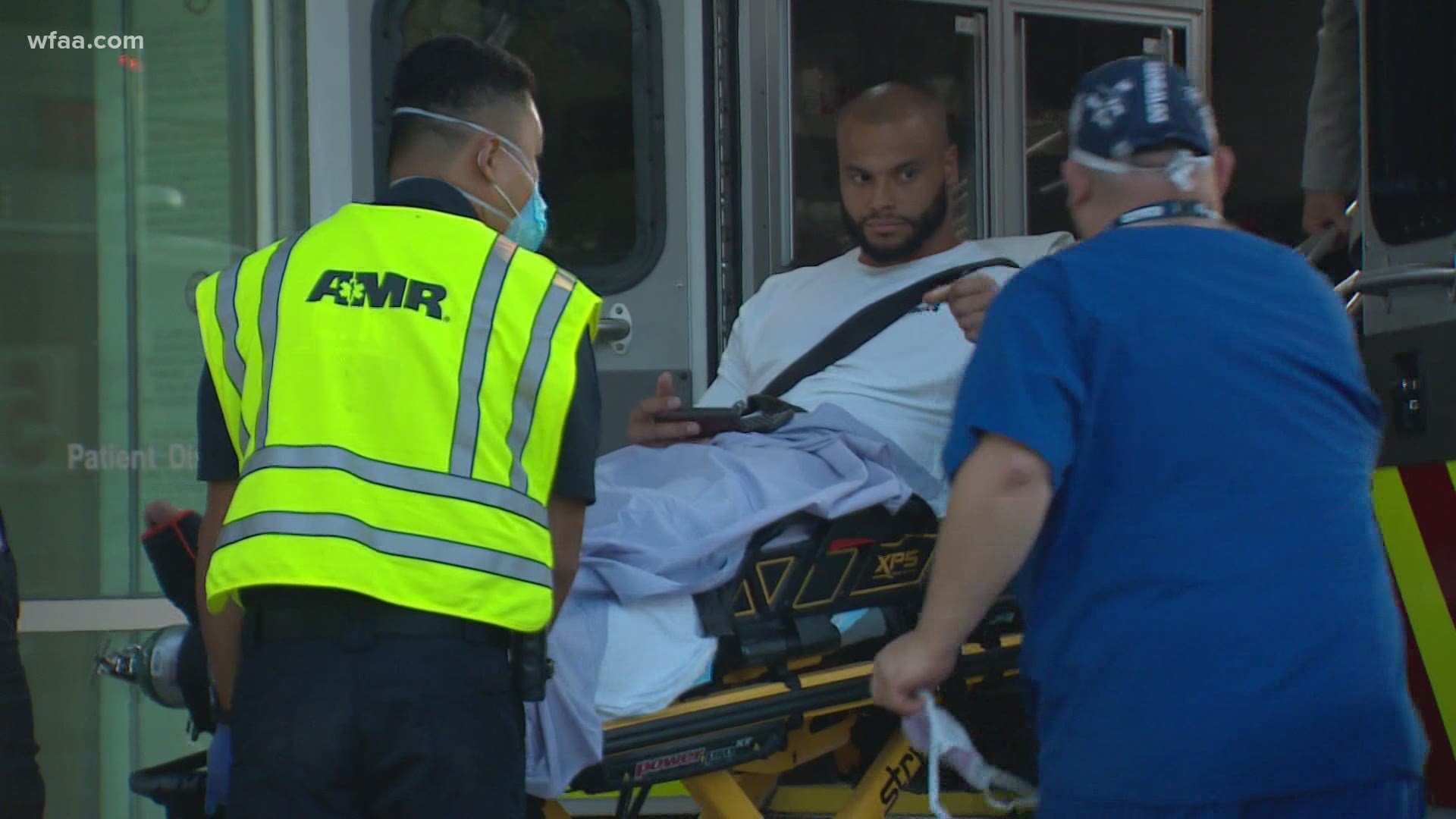 DALLAS — If there is one trait Dak Prescott has displayed in his 69 games with the Dallas Cowboys, it is his tenacity; the two-time Pro Bowler just can't be conquered. Even amid his 27 career losses, the former 2016 fourth-round pick's spirit has never been vanquished.

The greatest loss of his career actually took place during a much needed 37-34 victory over the New York Giants on Sunday. Prescott sustained a compound fracture to his ankle on a 9-yard carry with 6:46 left in the third quarter and the Cowboys leading 24-23.

The 27-year-old from Haughton, Louisiana, suffered an injury that ostensibly has ended his 2020 season, one full of promise as he led the NFL with 1,690 passing yards heading into Week 5.

No one in NFL history had thrown for that many yards through the first four games.

#Dak and Danny White are the only #Cowboys quarterbacks to have caught a TD pass in their careers.

And to think Prescott was doing it on a franchise tag. With Deshaun Watson, a comparable peer with the Houston Texans, earning $40 million annually, the former Mississippi State Bulldog was going to make that $40 million he was asking for in contract negotiations for the past 18 months look like a bargain.

Now, Prescott is in the "dark place" that athletes are at risk of fading into when they take on a significant injury.

Tony Romo suffered one, a broken back, in the 2016 preseason that opened up the door for a rookie quarterback from the SEC West to take his job, post an 8-1 record. That compelled the 36-year-old to make a concession speech of sorts on Nov. 15, 2016, for the good of the team to not allow a quarterback controversy to brew and endanger their magical run.

"You almost feel like an outsider," Romo said. "Coaches are sympathetic but they still have to coach. And you’re not there. It’s a dark place, probably the darkest it’s ever been. You’re sad and down and out and you ask yourself, ‘Why did this have to happen?’"

As Prescott sat on the artificial turf of AT&T Stadium, where he won 23 games as a starter, getting triaged by the medics, awaiting to be transported by the medical cart and treated for his leg injury, the field general wouldn't let the team's hope go with him. While being tended to, running back Ezekiel Elliott says, Prescott was inspiring the offense to finish the drive and beat the Giants.

“[Prescott] grabbed the O-line, told them that the game was going to be on us," Elliott said. "We are going to have to grind it out a little bit and they were up to the challenge, open up that big hole, get us in the end zone on that drive."

The Cowboys would finish the drive needing just three plays. Following a sack to knock the cobwebs off backup Andy Dalton, the former TCU Horned Frog QB found rookie wideout CeeDee Lamb for 11 yards. Elliott then found the big hole for a 12-yard touchdown run as he bowled his way into the end zone with the same indefatigable spirit Prescott has displayed since 2016.

Elliott understood what Prescott was telling the team as he rallied them from the ground.

Cowboys owner Jerry Jones, who hasn't been available to the press post game due to COVID-19 restrictions, issued a statement about Prescott's injury on Sunday night. The three-time Super Bowl-winning owner said the club was heartbroken to see Prescott's injury, but were consoled by the outpouring of support that their quarterback had received.

However, in Jones' mind, Prescott will complete the rehab process and recover.

"I know of no one who is more prepared, from the perspective of mental and emotional toughness and determination, than Dak Prescott to respond and recover from this challenge that has been put in front of him," Jones said. "He is an inspiration to everyone he touches. He has all of our love and support. And we have no doubt that he will return to the position of leadership and purpose that he brings to our team."

The Cowboys have 11 games and a 2-3 record to work with; the duration of their campaign is relatively defined. For Prescott, it is not yet known how long he will have to work back into his elite form.

No matter how long it takes, Prescott won't be conquered during this quest.

Do you think Dak Prescott will be the starting quarterback of the Dallas Cowboys in Week 1 of the 2021 season? Share your predictions with Mark on Twitter @therealmarklane.