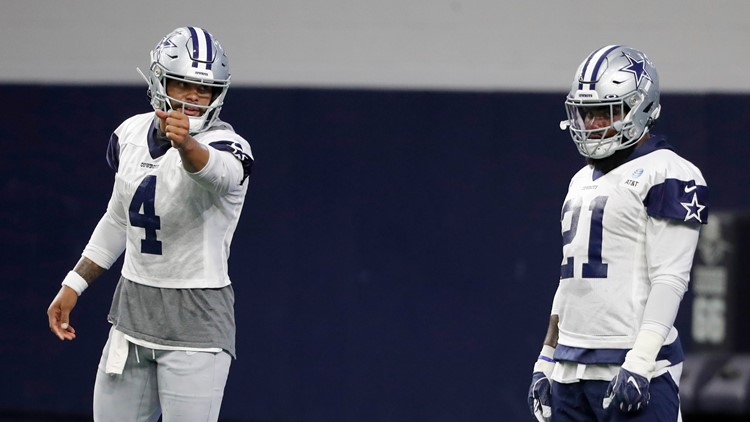 Photo by: AP
Dallas Cowboys' Dak Prescott (4) gestures towards running back Ezekiel Elliott as they participate in drills during a work out at the team's NFL football practice facility in Frisco, Texas, Thursday, Sept. 5, 2019. (AP Photo/Tony Gutierrez)

Keys for Cowboys to beat Giants in Week 1 showdown

DALLAS — A dynamic roster has been molded and shaped. The preseason games are over and done with. The drama surrounding Ezekiel Elliott and his holdout have been officially put to rest. Focus now shifts to the season opener and a rekindling of a bitter division rivalry with the New York Giants.

There might be a few new faces along the way, but this is a hotly contested matchup that dates back to a 31-31 tie in Dallas' debut season some 59 years ago.

Here in the now, expectations are sky high for the Cowboys coming off an NFC East title in 2018 and a playoff win before a familiar ousting in the Divisional round as they haven't reached the Conference Championship Game since the 1995 season.

With a young team that had stretches of dominance on defense, and rebounded in the middle of the season on offense after acquiring wideout Amari Cooper, the goal is to get back to battling for a shot at the Super Bowl.

In their way in Week 1 is a Giants team that is trying to take a page out of the Cowboys' book by building their team around a talented running back. While the Cowboys have the NFL's rushing leader in Elliott, 2018's second overall draft pick Saquon Barkley will look to wreak havoc in his sophomore season.

The Cowboys have beaten Eli Manning's gang the last four meetings and in nine of their last 12 contests overall. If Dallas wants to repeat as division champs, here's a look at a few keys in Week 1 to get them off to a good start:

A new playcaller in town in OC Kellen Moore

While Moore is a familiar face in the organization, as both Dak's backup and as his QBs coach, the former Boise State Bronco was upgraded to a much larger role with the ouster of Scott Linehan over the offseason. As to be expected, there is a lot of unknown with the first-year offensive coordinator.

The Cowboys offensive philosophy has been to run the football. However, it will be up to Moore to bring this offense into the 21st century and try to close the gap between themselves and the more explosive offenses around the NFL.

Moore will have a ton of weapons at his disposal as Elliott is back in the mix and suiting up behind one of the best and deepest offensive lines in the league. The Cowboys will get to enjoy a full season of Cooper at wideout and an anticipated second season from burgeoning standout Michael Gallup opposite Cooper.

But in the end, as is usual with OCs, it'll all come down to what Moore can get out of his QB.

There will be plenty of pressure on the starting signal caller on Sunday. Prescott is seeking a deal worth more than $30 million per season in line with the kind of contracts extended to peers Russell Wilson, Carson Wentz, and Jared Goff over the last few months.

It will be up to the former Mississippi State Bulldog and two-time Pro Bowl QB to start things off right and prove that he is worth the big deal.

Prescott has never had a better cast of talent to work with so there will be no excuses for a team expected to win. In his career so far, Prescott is 4-2 against the Giants, including a win over New York in the 2017 season opener.

Prescott will also be making history, matching Troy Aikman for most consecutive Week 1 starts to begin a career with Dallas.

Ezekiel Elliott has been fed

With the Elliott holdout saga over, and the workhorse thoroughbred runner back with the team, Zeke will be looking to take home his third rushing title in his first four seasons with a fancy new contract to boot.

Elliott is the Cowboys' meal ticket and the player the team has built their ability to succeed on offense around. Zeke will also get the opportunity to run behind offensive line captain and All Pro center Travis Frederick for the first time since the end of the 2017 season.

It is unknown if Elliott will see limited play after missing all of training camp and the preseason but the best guess is he's familiar enough with the playbook to get the majority of the snaps.

Elliott averages 96.5 total yards per game against New York and, like Prescott, has helped the Cowboys to four wins in six games against the Giants.

Should the Cowboys get a big lead, look for Elliott and rookie Tony Pollard to see plenty of action as they try to wear down the New York defense.

Prediction: The Dallas Cowboys open their season with a decisive 27-13 victory over the Giants.

Do you also think the Cowboys will be able to come away with a Week 1 win over New York? Share your thoughts and predictions with Patrick on Twitter @DraftCowboys.